Small, isolated township on the Fitzroy River in the Kimberley

Fitzroy Crossing came into existence for the simple reason that it was a suitable place to cross the huge Fitzroy River which, during the wet season, was capable of stranding travellers for weeks. Once a proper bridge, rather than the simple crossing, was built the town's reason for existing largely disappeared. It is now a small, predominantly Aboriginal, settlement on the banks of the Fitzroy River. Fitzroy Crossing sprawls. Without an identifiable town centre, and with some kilometres separating the new highway from the old river crossing, the town is a series of loosely connected small settlements rather than a single community. Its primary attractions are the beautiful Geikie Gorge which lies 15 km to the north of the town and the geologically significant Tunnel Creek and Windjana Gorge which lie 63 km and 95 km from the town on the road which runs north and connects with the Gibb River Road.

The Fitzroy River was first explored by Captain Stokes in 1838. He named it after Captain Robert Fitzroy who had been a commander on the HMS Beagle. There are five main First Nation language groups that live in Fitzroy Crossing, although the town is on Bunuba Muwayi (country). The language groups are Bunuba, Nyikina, Walmajrri, Gooniyandi, and Wangkatjungka.

Crossing Inn
Located at 35 Skuthorp Road is the much-changed Crossing Inn. It is the town's most famous building having been opened in 1897 by Joseph Blythe. It was originally a store and pub for passing stockmen, prospectors and bullock team drivers.

The Original Fitzroy Crossing
A short distance out of town on the Geikie Gorge Road is the old Fitzroy Crossing townsite. It is now no more than a few disused buildings. Nearby is the low level crossing of the river which can be traversed in the dry season. It is easy to see why it held travellers up for weeks in the wet season.

Geikie Gorge is part of an ancient 'barrier reef' which developed during the Devonian Period about 350 million years ago. The reef, considered by geologists to be the largest in Australia, started to the east of Kununurra and swept around in a huge arc to the north of the Kimberleys before crossing the current land mass near Derby and becoming exposed to the south and north of Fitzroy Crossing. It was 20 km wide and over 1000 km long. The waters of the Lennard and Fitzroy Rivers have cut through these ancient reefs exposing them and forming beautiful gorges.

Geikie Gorge abounds in wildlife which includes the harmless Johnson crocodile as well as Leichhardt's sawfish and Coach-whip stingrays whose saltwater ancestors swam up the Fitzroy River millions of years ago. The gorge has good camping facilities. For more information check out http://parks.dpaw.wa.gov.au/park/geikie-gorge which has detailed information on the Aboriginal cultural boat tours which traverse the gorge regularly during the dry season. Between June and August they make the journey four times a day. Tel: 0417 907 609 for more details.

Bell Gorge
Bell Gorge is the most famous of all the gorges in the Kimberley. It is a particularly beautiful freshwater gorge which is part of the King Leopold Range Conservation Park. Located 30 km off the Gibb River Road, access is down a path, across some rather slippery rocks and then down into a pristine pool. The area is described in great detail at http://www.kimberleyaustralia.com/bell-gorge.html.

Jandamarra and the "Pigeon" Heritage Trail
The Pigeon Heritage Trail explores the legend of Jandamarra who led a successful, and at time amusing, armed rebellion against the rather incompetent early European settlers. The trail comprises two drives which include Windjana Gorge and Tunnel Creek.

The journey starts at the old cemetery in Derby which is the location of the grave of Pigeon's first victim, Police Constable Richardson.

Pigeon shot and killed Richardson on 31 October 1894 after the policeman had betrayed him. Richardson had employed Pigeon to track 16 Aborigines accused of stealing and killing stock. What Richardson didn't realise was that some of the 16 Aborigines were members of Pigeon's family and they warned Pigeon that he had to set them free because stockmen had been seen with over 500 head of cattle heading towards Windjana Gorge which was part of their tribal lands.

Pigeon shot Richardson, freed the prisoners and with himself as their new leader they all headed off to ambush the stockmen. The attack was successful. Pigeon and his men killed the two head stockmen and it was only because another stockmen, following behind in a wagon, heard the shots and fled, that news reached the police at Derby.

The police sent a posse to the area and, in the battle that followed, Pigeon was shot but, with the help of some Aboriginal women, he managed to escape capture. In the months that followed large numbers of Aborigines were killed indiscriminately as a reprisal for the attack on the stockmen.

Pigeon hid in the Tunnel Creek Cave to the south of Windjana Gorge for two years. The Derby police were convinced he had been killed but in early 1896 he raided the Lillimooloora Police Station and stole a rifle and ammunition. This remarkable 'return to life' did much to ensure the legend of Pigeon. For the next few months Pigeon taunted the police and pastoralists. He was a superb bushman which allowed him to outwit them. He was finally cornered in 1897 and killed near his hideout at Tunnel Creek.

There is an excellent account of Pigeon's remarkable life titled The Pigeon Heritage Trail: Aboriginal-European Relations in the West Kimberley, 1890s and it can be ordered from the Derby Tourist Bureau. They offer a postal service.

Windjana Gorge National Park
Windjana Gorge National Park is located 95 km north of Fitzroy Crossing. At the entrance to Windjana Gorge is a sign which reads "380 million years ago in the Devonian period, huge colonies of tiny lime secreting organisms lived and died here. Ever so slowly the accumulation of the limestone skeletons of calcareous algae, stomatoporoids and corals built up this Devonian Reef." What it doesn't tell you is that the huge, grey cliffs on either side of the gorge are part of that reef and that, originally, it was a reef which was actually larger than the Great Barrier Reef extending over 1000 km from Kununurra in an arc through Derby and towards Fitzroy Crossing. As The Geology of Australia explains: "By the mid-Devonian there was a major embayment of the sea between the Pilbara and Kimberley regions, under the present Great Sandy Desert. This basin had major reefs and intertidal carbonate environments along its northern side. These limestones are exposed inland of Fitzroy Crossing, in the walls of Geikie and Windjana gorges."

As the visitor walks into the gorge (there are freshwater crocodiles in the pools) there are other signs indicating that Aborigines have been in the area for up to 60,000 years and that there was a time when megafauna - huge kangaroos and wombats - roamed through the gorge. The walk along the river bed is particularly impressive and the idea that the cliffs on either side are a fossilised coral reef is quite disorientating.

Tunnel Creek
Tunnel Creek is located 63 km north of Fitzroy Crossing on the main Derby-Fitzroy Crossing Road. It is a unique formation created by waters from the creek cutting a 750 m tunnel through the ancient reef. The tunnel is 15 m wide and up to 12 m high and offers visitors an excellent opportunity to see the ancient 'barrier reef' from an ideal vantage point. There are two easy walks: the Tunnel Entrance Walk which is only 200 m return from the car park. At the entrance it is possible to see the fractured limestone rocks on the creek bed. The second walk, the Subterranean Trail, is 1.7 km through the Tunnel Cave. It passes a hole in the roof, has pools which need to be waded through, and is a genuine adventure.

On a sign at the entrance to the tunnel is an explanation of the geology of the area: "Tunnel Creek once flowed across a ravine in the top of the range. Then the ground surface on both sides of the range was much higher than it is today. Water seepage gradually enlarged fractures in the limestone and the creek adopted an underground course."

Always remember that Jandamarra (Pigeon) lived in this cave for nearly three years and managed to successfully avoid the police. Eventually he was caught and killed near the entrance to the tunnel on 1 April, 1897.

* Prior to the arrival of Europeans a number of First Nation groups lived and moved through the area. The people who now own the land belong to the Punuba (sometimes spelt Bunuba) language group. There are five main language groups that live in Fitzroy Crossing, although the town is on Bunuba Muwayi (country). They are Bunuba, Nyikina, Walmajrri, Gooniyandi, and Wangkatjungka.

* The Fitzroy River was first explored by Captain Stokes in 1838. He named it after Captain Robert Fitzroy who had been a commander on the HMS Beagle.

* It wasn't until 1879, when Alexander Forrest explored the upper reaches of the river, that positive reports of the pastoral potential reached Perth.

* In the early 1880s Solomon Emanuel, a grazier and banker from Goulburn in New South Wales, established the Gogo station 20 km downstream from the present day site of Fitzroy Crossing. He took three years to overland cattle from Goulburn.

* The local Aborigines resisted settlement by European pastoralists and the area around Fitzroy Crossing was the subject of a number of bloody battles.

* On 1 April, 1897, after hiding in Tunnel Creek for nearly three years, Jandamarra was shot and killed by an First Nation police tracker near the entrance to Tunnel Creek Cave.

* In 1897 the Crossing Inn was built by Joseph Blythe. It was an inn and store for passing stockmen and was the beginning of the town.

* The town's first bridge across the Fitzroy River was completed in 1935.

* The current bridge was completed in 1975. That year the town was officially gazetted.

* In 1979-1980 local Aborigines gained control of  Noonkanbah Station southwest of Fitzroy Crossing. The mining company Amex immediately placed a claim for mining rights on the property. The new owners opposed the claim. Police were brought into the area to ensure safe passage for drilling equipment. With a sense of delicious irony Amex wasted a lot of money and the government  behaved irresponsibly because when the rigs drilled no oil was found. 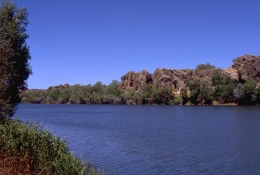 Geikie Gorge where, if you're brave, you can swim with crocodiles 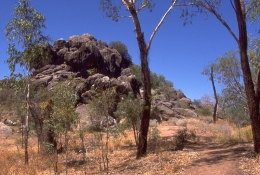 The Nature Trail at Geikie Gorge. 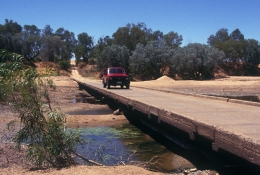 The historic crossing at Fitzroy Crossing. 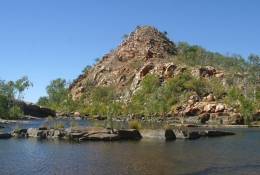 The swimming hole at Bell Gorge. 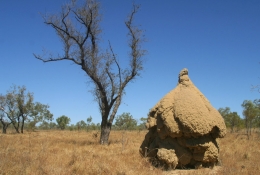 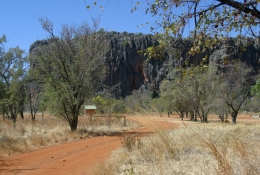 The sheer cliffs of the Devonian coral reef. 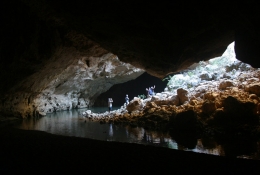 An opening in the cave roof at Tunnel Creek. 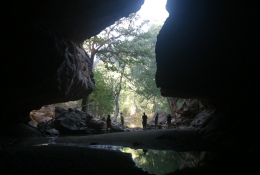 The entrance to Tunnel Creek Cave north of Fitzroy Crossing. 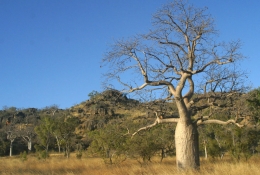 A Boab Tree with the Devonian coral reef in the background near Tunnel Creek.