The appeal of Fitzroy Falls is threefold. The falls themselves, which fall 82 metres into the upper reaches of Kangaroo Valley, are dramatic and impressive. There are some excellent bushwalks around the rim of the ravine and the views to the south are across superb stretches of eucalypt wilderness inhabited by numerous birds of prey, including hawks, wedge-tailed and other eagles, plus parrots, honeyeaters, lorikeets, crimson rosellas, cuckoos, cormorants, grebes, lyrebirds and two threatened species -  the swamp parrot and eastern bristle bird. There are also wallabies, kangaroos, bandicoots, possums and echidnae in the area. The Falls are located at the north-eastern end of 199,745 hectare Morton National Park. It is one of the state's largest national parks.

Fitzroy Falls is located 139 km south-west of Sydney via the Hume Motorway and 197 km via Bomaderry and Kangaroo Valley.

The waterfall was originally named Throsby's Waterfall after the explorer Charles Throsby but, when it was visited by Sir Charles Fitzroy, Governor of New South Wales (1846-51) in 1850, it was renamed in his honour.

Fitzroy Falls Visitor Centre
The Fitzroy Falls Visitor Centre has extensive information on the local history, wildlife and birdwatching in the area as well as information about the local Aboriginal history. There are also a cafe, picnic and barbecue facilities beside Yarrunga Creek, a delightful creek which tumbles over the escarpment into the Yarrunga Creek Valley. For more information check out http://www.environment.nsw.gov.au/nationalparks/parkVisitorCentre.aspx?id=N0022.

Fitzroy Falls
It has been claimed that the falls were not particularly important to the local Tharawal people. When they were discovered by Charles Throsby they became a popular picnic place. In fact they were so popular that the Governor of New South Wales, Sir Charles Fitzroy, visited in 1850. The falls are where the Yarrunga Creek falls into the Kangaroo Valley and flows into the Kangaroo River. A reserve around the falls was established as early as 1882. The reserve was absorbed into the larger Morton National Park in the 1960s. The flow at the falls has been reduced since the construction of the Fitzroy Falls Reservoir which has dammed  the Yarrunga Creek upstream from the falls since 1974. The reservoir is 5.2 square kilometres in area and has a maximum capacity of 9,950 megalitres.

Both walks start at the Lookout which offers dramatic views of the falls which tumble 82 metres to the valley floor. The view is always impressive. On a clear day it is panoramic and dramatic. On a miserable day it is misty and mysterious.

The East Rim Walking Track "starts at the footbridge on the eastern side of the falls and follows the escarpment to May Lookout (10 minutes) where the visitor can see the lower Grotto Falls and the bottom of the Twin Falls. The track then leaves the escarpment in an easterly direction and gradually winds down to Fern Tree Gully (25 minutes). From Fern Tree Gully the track winds up to Warragong Lookout (40 minutes) where the side view of Fitzroy Falls can be seen. The track then follows the cliff face to Valley View Lookout (70 minutes) where superb views of the top of Twin Falls and the plateau of Mount Carrialoo can be seen. West of Mount Carrialoo is the volcanic extrusion Mount Moollatoo or the Grassy Mountain and the Yarrunga Valley." It is rated as an easy walk. The flora is particularly impressive in spring when the wildflowers are in bloom

The West Rim Walking Track can be done as a very short walk or a longer walk. There is an easy walk of 15 minutes to the Jersey Lookout which offers an excellent view of the falls and the dense rainforest at its base. This is the popular location for photographs. Beyond the Jersey Lookout the track continues to the fire trail before branching to the west to Twin Falls. The lookouts on the eastern side of Twin Falls give some good views of Yarrunga Creek, Twin Falls, and the lower Grotto Falls. On the western side of the stream Paines Lookout allows walkers an excellent close view of Twin Falls. The track then continues to Starkey’s Lookout which provides an excellent view of the Lady Hordern Falls, which cascade 76 metres to the valley floor. Beyond Starkey’s Lookout the track continues on to Renown Lookout where there is a superb view of all the major falls in the upper Yarrunga Creek system. There are numerous guides to the walks on the web. Check out http://www.rabbitte.com.au/TreksandClimbs/tracknotes_fitzroy.htm and http://www.environment.nsw.gov.au/nationalparks/parkWalking.aspx?id=N0022 for more details.

Belmore Falls
Located 12 km from Fitzroy Falls on Belmore Falls Road (east of Fitzroy Falls turn left into Myra Vale Road and then right into Belmore Falls Road) are the impressive Belmore Falls. The road is unsealed for much of the way but it is suitable for 2WD vehicles. Parking is at the Hindmarsh Lookout car park and from there it is a short walk to Hindmarsh Lookout from where there are panoramic views across to the falls over Morton National Park and Kangaroo Valley. The falls were named after the Earl of Belmore who was the Governor of New South Wales at the time. A road to the falls was built in 1887. The water falls over 100 metres into the Barrengarry Creek Valley which, in turn, joins the Kangaroo Creek which is part of the Shoalhaven River catchment area. This is an ideal place for a bush picnic.

* Prior to the arrival of Europeans the Fitzroy Falls area was inhabited for at least 20,000 years by the Tharawal and Wadi Wadi people who moved backwards and forwards from the coast to the hinterland.

* The most significant early explorer in the area was Charles Throsby who travelled south from the Moss Vale area into Kangaroo Valley in 1818. He was seeking a route to Jervis Bay.

* In 1830 Surveyor Robert Hoddle and a gang of convicts cut a bridle path down Saddleback Mountain. It was part of a planned track from Cowpastures (now known as Camden) down the Illawarra escarpment to Kiama and Gerringong.

* In 1850 the Governor of New South Wales, Sir Charles Fitzroy, visited the falls and they were subsequently named after him.

* In 1882 4000 acres (1,619 ha) was reserved around Fitzroy Falls it included the upper reaches of the Clyde, Shoalhaven, Endrick, and Kangaroo Rivers and was characterised by rugged sandstone cliffs and deep valleys.

* The land which would eventually become the Morton National Park was set aside in 1938. This was a result of the work done by the politician Mark Morton MLA - the park is named in his honour.

* In the 1960s control of the falls was handed over to the NSW National Parks and Wildlife service.

There is a useful local website - http://www.highlandsnsw.com.au/towns/falls.html - and the National Parks has an informative site with detailed information about opening hours and how to access the falls. Check out http://www.environment.nsw.gov.au/nationalparks/parkVisitorCentre.aspx?id=N0022 for details. 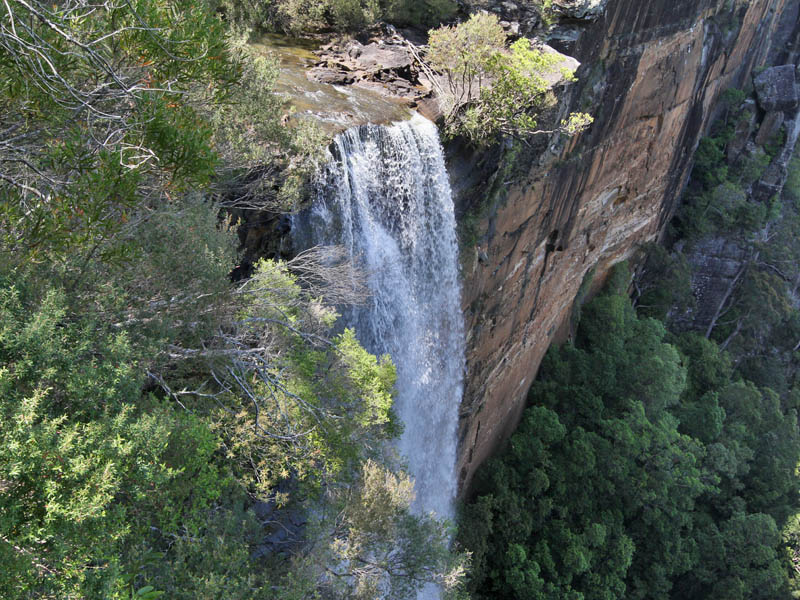 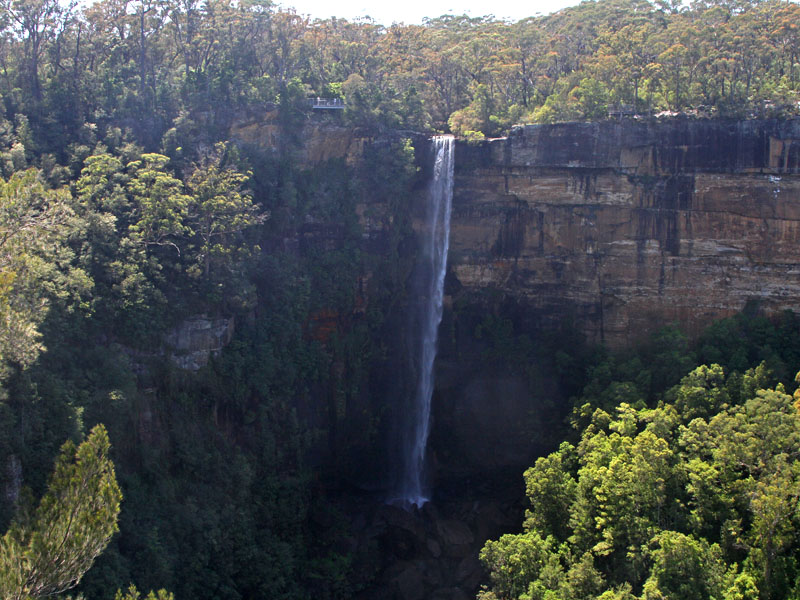 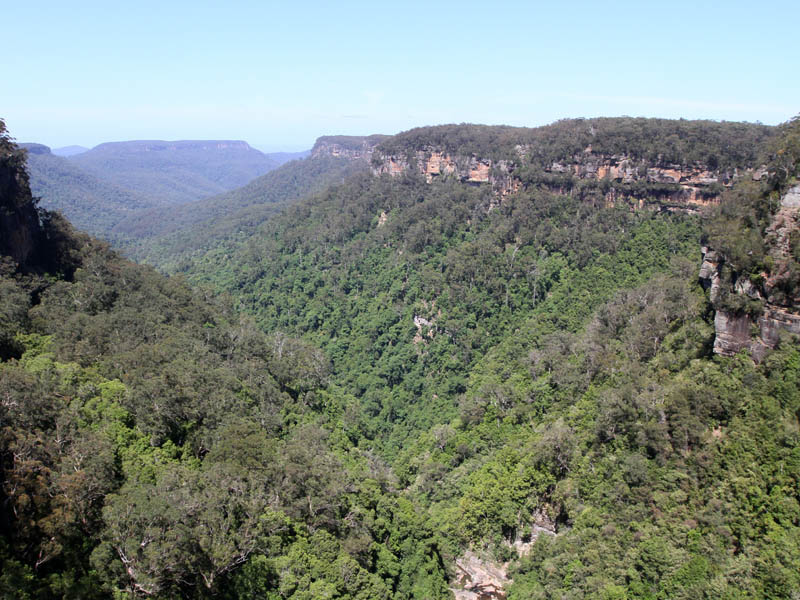 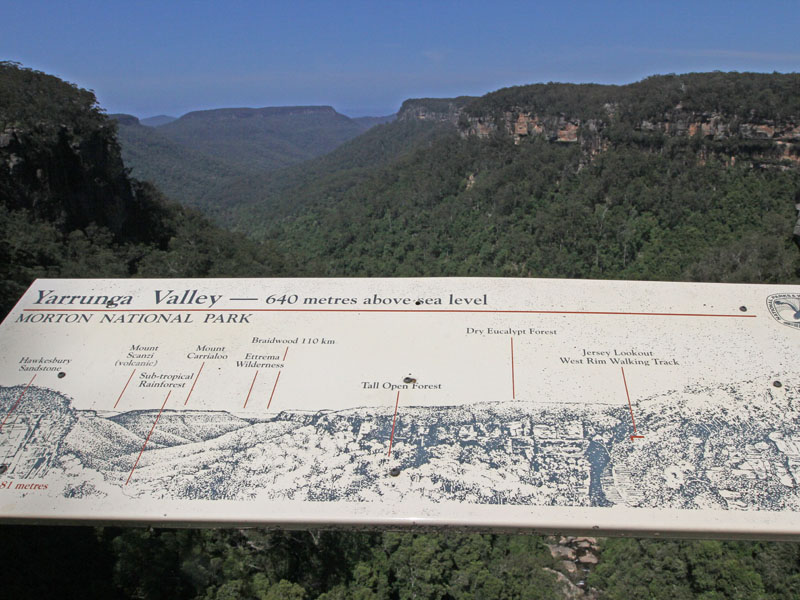 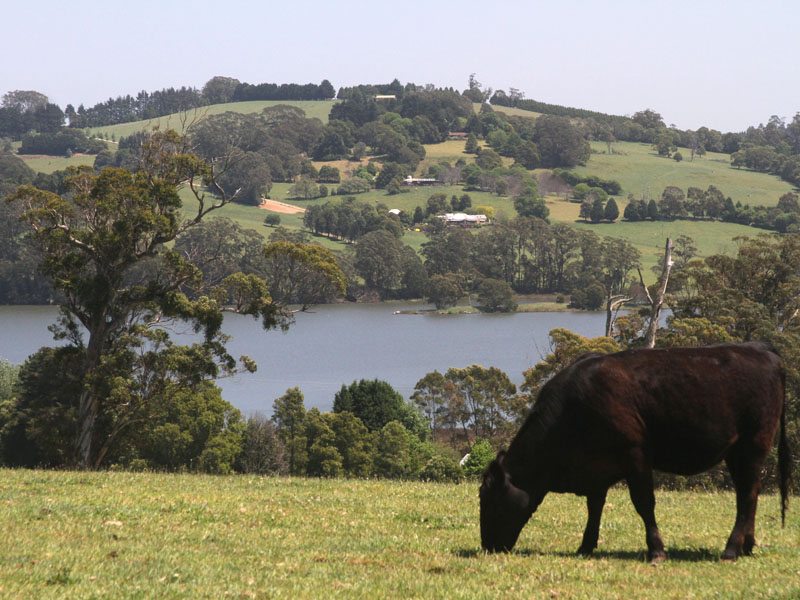 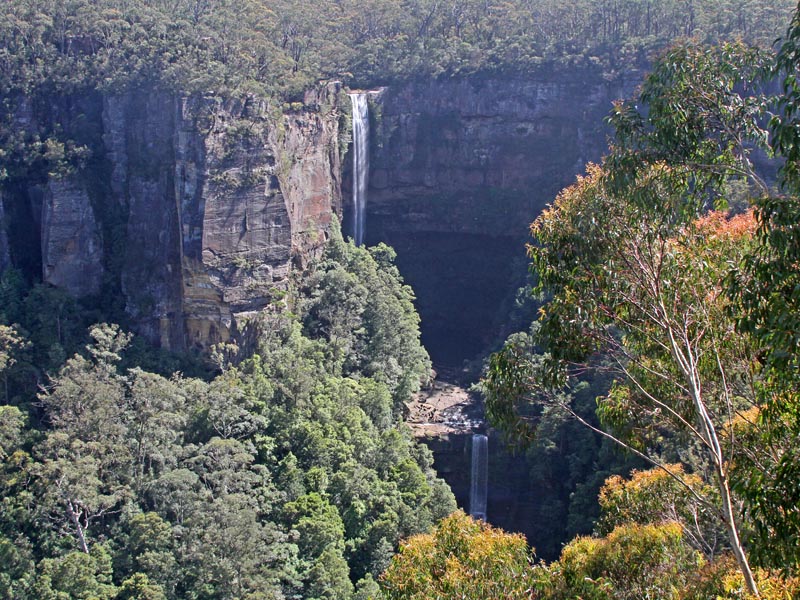 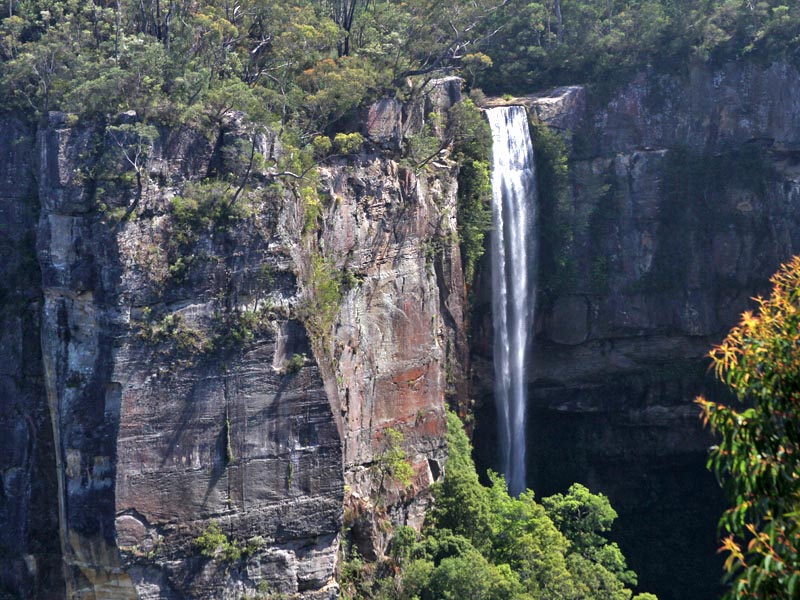 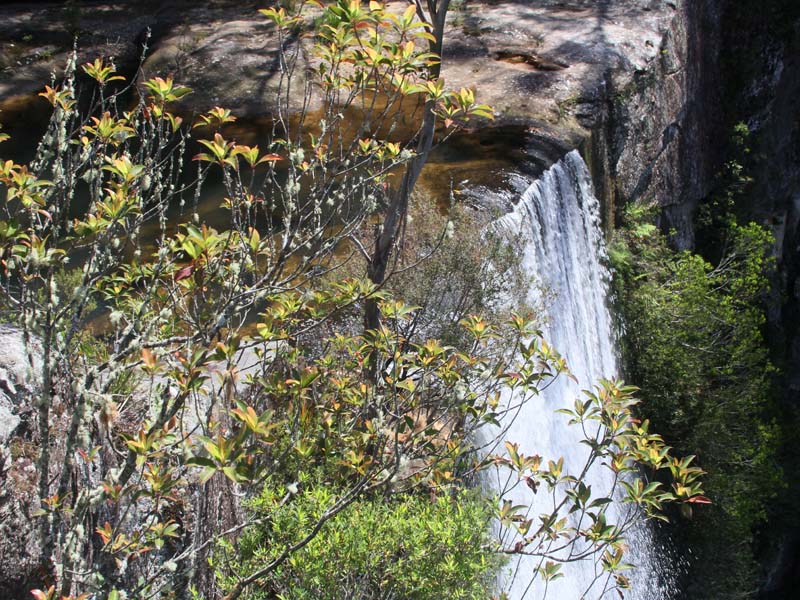 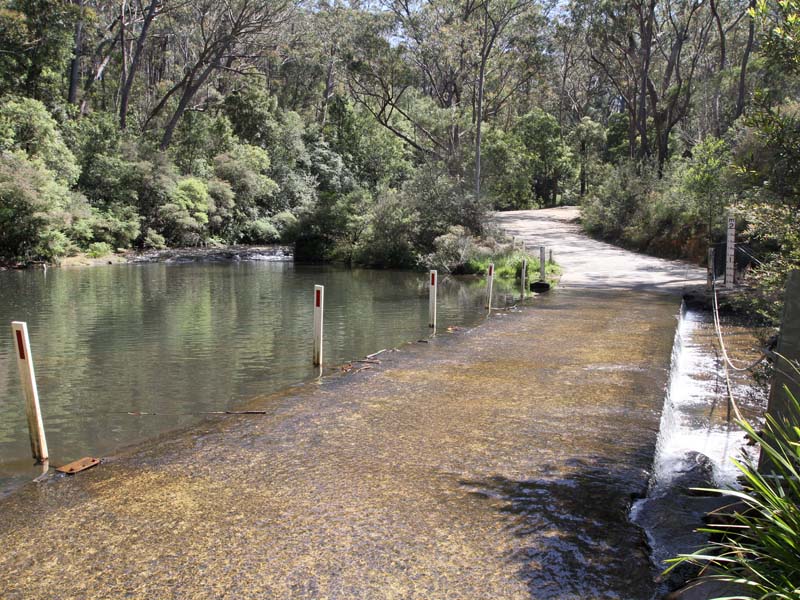 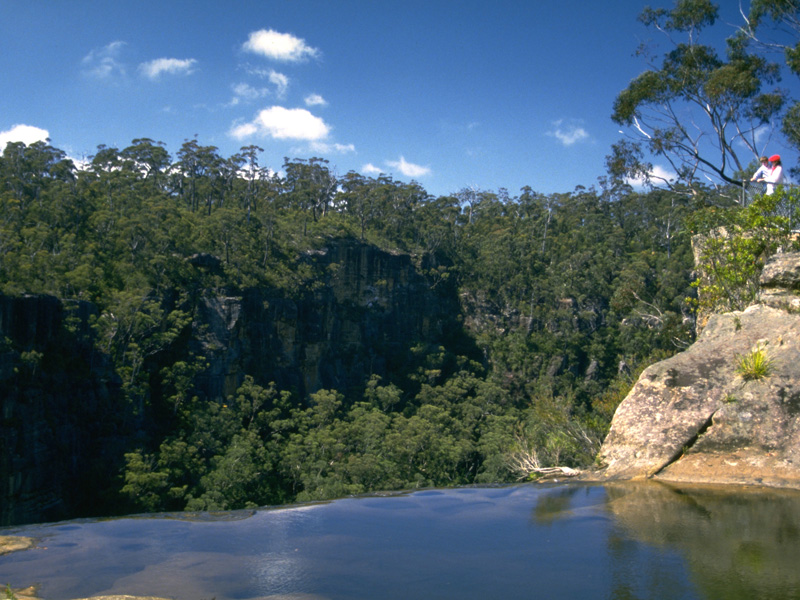 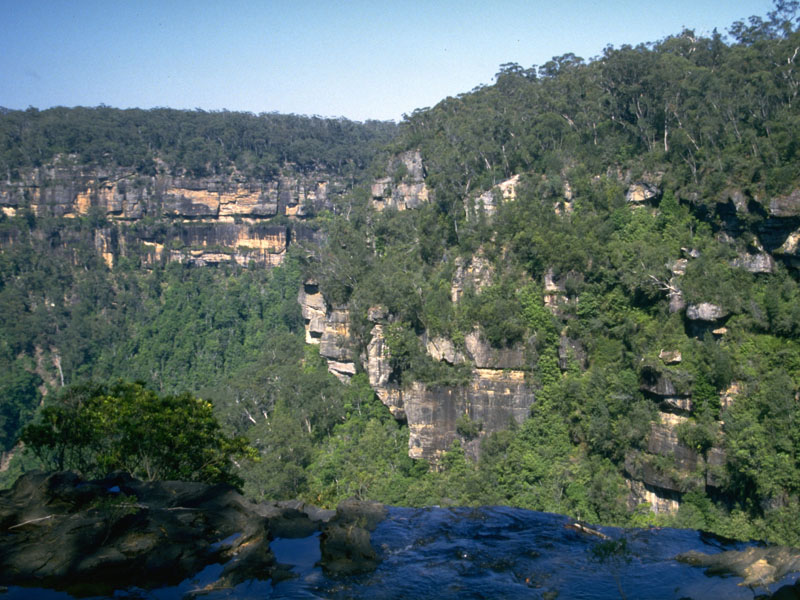 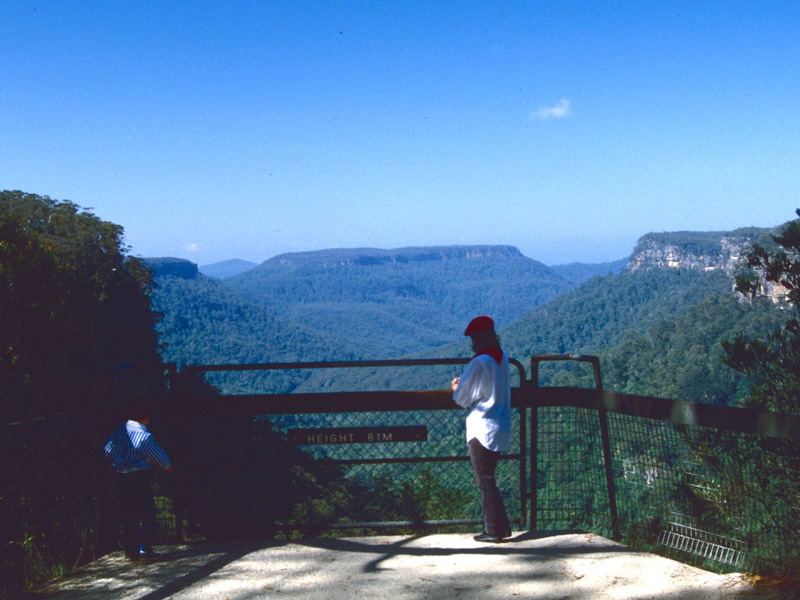