Continental island with a reef, resort and National Park off the coast from Cairns

Fitzroy Island is a large continental island which was once part of the mainland. The channel between the island and the coast was drowned about 6,000 years ago when sea waters rose at the end of the Ice Age. Today the vast majority of the island is a National Park with a small area being used as a pleasant and reasonably priced resort.

Fitzroy Island is located 30 km east of Cairns. It is 45 minutes by the Fitzroy Flyer.

When Captain James Cook sighted Fitzroy Island in June, 1770 he named the island after the Duke of Grafton who was the Prime Minister when the HM Barque Endeavour left England.

Description of the island
A substantial island (339 hectares) which has been a Cinderella for visitors to Cairns who prefer the more attractive, and higher profile, options of Green Island (a coral cay) and Outer Reef journeys to reef platforms. Fitzroy Island has beautiful beaches, excellent bushwalking and is sufficiently large and close to the mainland to have diverse tropical vegetation and fauna. The Fitzroy Island National Park takes up 324 ha (97%) of the island and the highest peak is 269 metres.

How do visitors access it?
The Fitzroy Flyer departs from Cairns at 8.00 am, 11.00 am and 1.30 pm daily from Marlin Wharf Berth 20. Check http://www.fitzroyisland.com/getting-to-fitzroy-island for fares and bookings.

Activities on the island
Bushwalking
Download the National Parks map of the island (https://www.npsr.qld.gov.au/parks/fitzroy-island/pdf/fitzroy-island-map.pdf) and you will note that there are four walks from the jetty and the resort.
(a) Secret Garden Track - a pleasant 1 km, 45 minute walk (return) through rainforest and around granite boulders.
(b) Nudey Beach Track - a pleasant and easy walk to a quiet and peaceful beach through rainforest and coastal bush - 1.2 km - 45 minutes return. The track is mostly bitumen.
(c) Lighthouse Road - seriously steep road (it is concreted all the way) up to the island's modern lighthouse (built 1970). It is 3.6 km return (2 hours) but the views are spectacular and worth the effort
(d) Summit Track - just below the lighthouse is the 1.5 km return walk to the summit. It offers even more spectacular views but is also very steep. Really for fit bushwalkers rather than day trippers.

Wildlife on the Island
The National Parks website (https://www.npsr.qld.gov.au/parks/fitzroy-island/about.html) explains: "On the island catch a glimpse of brilliantly-coloured Ulysses butterflies, along with emerald doves, sulphur-crested cockatoos, orange-footed scrubfowl, ospreys and migrating birds, such as buff-breasted paradise-kingfishers and pied imperial-pigeons. One of the largest predators on the island, the 1.2 m long yellow-spotted monitor, can be seen around the resort area. At night the eastern dusky leaf-nosed bat, a small insect-eating bat, can be seen chasing insects near the lights." And there is more detailed information at https://www.npsr.qld.gov.au/parks/fitzroy-island/culture.html#natural_environment.

History of the Lighthouse
A number of ships were wrecked on and around the island so that by 1923 a navigation light, nothing more than a carbide gaslight, was established on Little Fitzroy Island. It was replaced by a more substantial lighthouse on the main island in 1943 during the war years. The light was established specifically for wartime shipping in the area. Cottages for the lighthouse keepers were built around 1960 and the current lighthouse  was built in 1973 and continued to operate until 1991 when an automatic system was established. It is well worthwhile, particularly for the view, to walk up to the lighthouse but the cement path is very steep and challenging.

Water Activities
Snorkelling and Diving
Both swimming and snorkelling can be enjoyed around the resort. The National Parks website explains that the fringing reef is home to varieties of reef fish, hard and soft corals and turtles. There are strict controls on fishing around the island with seasonal closures in place.

Fitzroy Island Resort
History
The resort has been through many changes of ownership in recent years. In 2006 it was sold for $18 million by Raging Thunder to Joshua Hunt. Hunt went into receivership five months after taking over the resort. It was then sold to Cairns developer, Doug Gamble, for about $8 million in 2010. He spent six years modernising and updating the resort and opened it in 2011. In 2018 he announced that he would spend a further $2.5 million updating the resort.

How big is it?
The Fitzroy Island Resort has 99 rooms. The rooms range from a 4 bedroom penthouse through resort studios, island suites, two bedroom suites, beach cabins and butterfly bungalows. Most of the accommodation sleeps four or six people.

Who does it appeal to?
Daytrippers from Cairns as well as people who want a reasonably priced holiday on the Great Barrier Reef.

* Fitzroy Island was formed 6,000 years ago at the end of the Ice Age when the sea rose and separated the island from the mainland.

* Prior to the arrival of Europeans the island was home to the Gunggandji Aboriginal people. They believe that during the Dreamtime a person named Gulnyjarubay came named the island Gabara meaning 'the fist'. The image was that the arm and the wrist had been submerged and all that was left was 'the fist' standing up out of the water.

* In 1770 Captain Cook became the first European to sight Fitzroy Island. He named the island after the Duke of Grafton who was the Prime Minister when the HM Barque Endeavour left England.

* Throughout the nineteenth century the island was visited by itinerant pearlers.

* By the late 1800s a beche de mer (sea cucumber) industry was operating on the island.

* Around 1876 the island became a quarantine station for the Chinese who arrived in north Queensland heading for the goldfields around the Palmer River.

* By the early 1900s there was an Anglican Aboriginal Mission at Yarrabah.

* By 1923, after a number of shipwrecks, the first lighthouse was built. It was little more than a navigation light and was established on Little Fitzroy.

* During World War II the island became a military base to protect from Japanese invasion.

* A more substantial lighthouse was built in 1943.

* Cottages for the lighthouse keeper were built in the early 1960s.

* The current lighthouse was built in 1970

* In 1991 when an automatic lighthouse system was established. 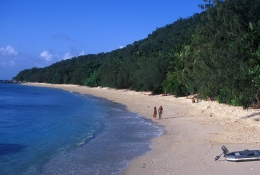 Nudey Beach is easily accessible from the resort 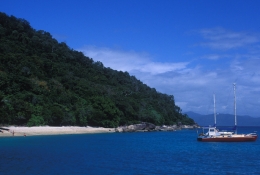 The island is perfect for daytrippers from the mainland 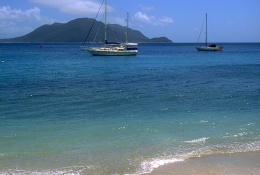 Looking across from Nudey Beach 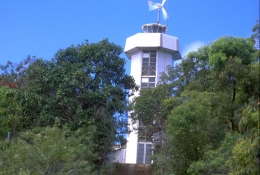 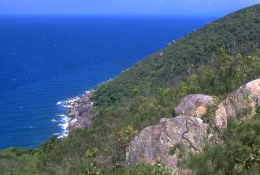 The view from the lighthouse at the top of Fitzroy Island