Tiny town on the Eyre Peninsula which is popular with anglers and whale watchers.

Fowlers Bay is located on the edge of the lonely, isolated flatlands of the Nullarbor Plain between Ceduna and Nullarbor. It is at the eastern extremity of the Great Australian Bight and, in recent years, has become a popular place for very keen anglers who can expect to catch Mulloway, Whiting, Garfish, Tommy Ruff and Trevally from the jetty, the shoreline, the rocky headlands and from boats launched into the bay.

Fowlers Bay was named by Matthew Flinders in 1802 after his lieutenant, Robert Fowler who later became Admiral Fowler. The name Fowlers Bay was not officially adopted until 1940. Prior to that it was variously known as Port Eyre, Tarambo and Yalata - a local Aboriginal word which probably meant either "shellfish" or "oyster".

Fishing
The waters of Fowlers Bay are known as ideal for fishing for Mulloway, Whiting, Garfish, Tommy Ruff, Trevally. Surf fishing is possible and worthwhile from Scott's Beach and Mexican Hat; the jetty is immediately accessible; and boats fishing in the bay will often return with a good haul.

Sighting Marine Animals - Whale Watching
The coast is known as a home for Australian sea lions, Southern right whales (they use Fowlers Bay in the winter months - May to October) and bottlenose dolphins. The Southern Right Whales use the warm waters of the bay for breeding.

Fowlers Bay Eco Tours and Whale Watching
Subject to weather conditions, and the presence of whales, the Fowlers Bay Whale Watching Boat Tours depart from the jetty on a daily basis between July and October. There are details of prices and booking arrangements at http://www.fowlerseco.com/whales.htm. The site notes that Fowlers Bay is an ideal breeding ground for Southern Right Whales "These beautiful creatures return to the bay year after year in their search for warmer waters to breed, give birth and nurse their young. Southern Right Whale calves are born with very little insulating blubber, so Fowlers Bay provides the perfect temperature, and undisturbed protection that the mothers need as their calves suckle on their thick, rich milk, gaining about 90 kg per day. Come spring, they are ready for their long journey with their mother's guidance back to the sub-Antarctic feeding grounds. With an adult whale growing up to a massive 18 m in length and weighing up to 80 tonnes, and the calves being between 5-6 m at birth and weighing in at an incredible 1.5 tonnes, these spectacular creatures are not, and can not be missed!"

The Longest Golf Course in the World
Nullarbor Links Golf Course
A very typical Aussie outback joke the Nullarbor Links Golf Course is the world’s longest golf course with the first hole in Ceduna and the 18th hole 1365 km away at Kalgoorlie in Western Australia. Check out the details at http://www.nullarborlinks.com. It is real and can be a lot of fun for committed golfers.
Hole 4:  Wombat Hole Par 5 and is 520 metres.
On the eastern side of the roadhouse, and rising over the hill and down into the next valley, is the very challenging Wombat Hole. It is rocky, covered in chunks of limestone and unforgiving. It is the most difficult hole on the course with a bunker 200 metres from the hole. It is best to park and the roadhouse and walk to the tee. You are going to have to walk back anyway.
Robbie’s Guide to the Nullarbor Links
Nundroo – Wombat Hole
“A genuine Par 5 with a ‘fairway bunker’ about 200 metres from the tee. The second shot will be played over the crest of a hill, potentially cutting the dog-leg. The fairway is scattered with rocks and rubble, but the mandatory tee up assists. The green is small and you don’t want to be long on approach.”
The notes on the hole record: " "Nundroo has the largest population of Southern Hairy Nosed Wombats in Australia. Their isolation has shielded them from many diseases threatening the species in many other parts of Australia. Regular surveys are done around Nundroo and it is estimated over 2.5 million wombats inhabit this area. Even though these wombats pose a threat to farmland and are regularly hunted by the indigenous population, their numbers appear to unthreatened.
"The Southern Hairy Nosed Wombat has also been very important to protecting the Northern Hairy Nosed Wombat, whose numbers are endangered: only 100 or so still alive in the wild today. The Southern Hairy Nosed Wombat has been used as a surrogate mother to help repopulate this species.
"The tee has been named after the Karinkabie Well, seen on the hill in front of you to the right. This well was established with the first settlers and is some 150 years old. The well was used up until recent times by the Nundroo Roadhouse before becoming too salty for general purpose use. Old ruins lie around the well where there used to be a house and a vegetable garden used by one of the first settlers. The name is unknown. The hole is known as Karinkabie."

* Prior to the arrival of European settlers the area was occupied by the Wirangu and Mirning Aboriginal people.

* The bay was first sighted by the Dutchman Francois Thyssen who sailed across the Great Australian Bight in 1627 in the Gulden Zeepard.

* In 1791 the British explorer, George Vancouver, sailed along the coast enroute to New Zealand.

* In 1793 the French explorer, Bruni D'Entrecasteaux, reached the coast near Fowlers Bay.

* In 1802 Matthew Flinders, circumnavigating Australia in the Investigator, explored the Bay and named it after his lieutenant, Robert Fowler. Flinders and his men actually went ashore here thus becoming the first Europeans to step onto South Australian soil. Flinders described the area: "The cliffs and rocks of Point Fowler are calcareous, and connected with the mainland by a low, sandy isthmus of half a mile broad. No fresh water was discovered around the shores of the bay, nor was there any wood large enough for fuel, near than the brow of a hill two or three miles off...Fowlers Bay, however, may be useful to a ship in want of a place of shelter".

* In 1802-1803 Nicolas Baudin explored the coast and named Murat Bay and Cape Thevenard.

* A small settlement of whalers and sealers, known as Yalata, grew up on Fowler Bay between 1840-1844.

* The explorer, Edward John Eyre, set up a base camp on Flinders Bay on 17 November, 1840 and on 25 February 1841, accompanied by a European named Baxter, and three Aborigines one of whom was named Wylie, he left to cross the Great Australian Bight.

* Fowlers Bay stopped operating as a whaling station in 1843.

* In 1860 William Swan and Robert Barr Smith established Yalata Station which stretched along the coastline from Streaky Bay to the Great Australian Bight. It was 42 square miles in area

* In the 1870s, after a Court House had been erected at Fowlers Bay, the government decided to make an example of an Aborigine who had been found guilty of murder. A gallows, government officials and mounted constables were shipped from Adelaide. The Aborigine was duly executed  in front of other Fowler Bay Aborigines.

* In 1877 the Post and Telegraph Office was extended for the East West Telegraph Line.

* The Police Station and Court House were established in 1883.

* The town, named Yalata, was formally surveyed and proclaimed in 1890.

* In 1912 the Court House was built as an extension of the local police station.

* The name Fowlers Bay was not officially adopted until 1940.

* In 1951 the South Australian Government purchased Yalata station for £64,000. It subsequently became an Aboriginal reserve.

* The last ship to berth at the Fowlers Bay wharf was the MV Yalata in 1966.

* In 2008 a film Whale Dreamers featured a local Mirning Aboriginal man calling to the whales that arrive in the bay.

* Today Fowlers Bay is little more than a jetty, a few shacks and some ruins beside the bay with a prominent monument near the beach recalling the arrival of Matthew Flinders. It has no reticulated water or electricity. However it has become a place to stopover on the crossing of the Nullarbor.

There is no Visitor Information but both the Holiday Flats and Caravan Park will help with advice.

There is a kiosk but no eating facilities at the settlement.

There is a very informative local website. Check out http://www.fowlersbay.com. 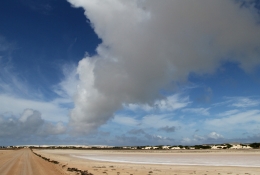 The causeway crosses a salt lake with sand dunes on the horizon. 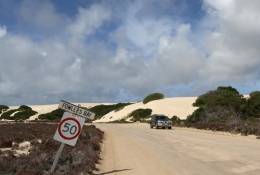 Huge sand dunes rise beside the road as the visitor enters the town. 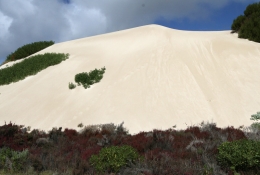 Mountainous sand dunes run along the length of the town's foreshore. 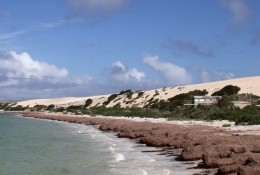 Sea grass edges the foreshore and sand dunes rise behind it. 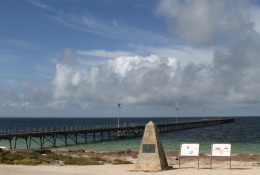 The jetty, the monument to Matthew Flinders and the historic signage at the shore line. 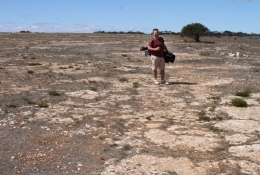 The fairway is as tough as it gets. Pure rock and rubble. 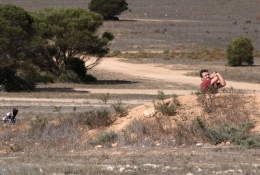 Playing out of the bunker 200 metres from the tee. 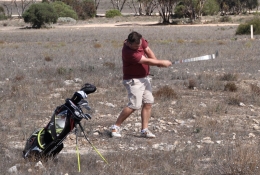 Driving towards the green 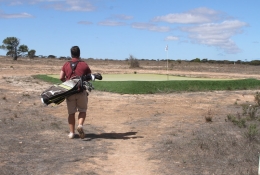 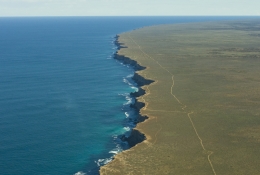