Franklin is a small, attractive town which lies between the Huon River and the hills of the Huon Valley. It currently has a population of around 1,000 who either work in agriculture, aquaculture and forestry or commute to Hobart which is only a little over half an hour away. The appeal of the town lies in its location and its historic architecture. It is a town where the uniqueness of Tasmania is best symbolised by the remarkable Petty Sessions Gourmet Cafe where visitors can gorge on fresh Rainbow trout and Atlantic salmon from the Huon River; Bruny Island oysters; local crayfish, abalone and scallops; and beef, lamb and Tasmanian venison.

Franklin is located 45 km south-west of Hobart on the Huon Highway.

Sir John Franklin was Governor of Tasmania from 1837-1843. His wife, Lady Jane Franklin. was a tireless worker aiming always to help the poor in the colony. In 1839 she bought and distributed land in 100 acre allotments to poor settlers. The project became known as 'The Settlement'. Later 'The Settlement' was renamed Franklin in Lady Franklin's honour.

Petty Session Gourmet Cafe
There are a small number of exceptional regional cafes scattered around Tasmania and this is one of them. Located on the main street in the old timber Court House (built in 1882) it is a tour de force of Tasmanian haute cuisine. The Petty Sessions brochure explains: "Petty Sessions fare is created from locally grown pure Tasmanian produce ... locally grown means Rainbow Trout and Atlantic salmon from the Huon River, the best crayfish, plump scallops, Bruny Island oysters, and south coast abalone ... Locally grown also means fresh apple juice from Lucaston, ginger beer from d'Entrecasteaux, Huon Valley mushrooms, the full range of seasonal stone fruits, tender lamb, prime beef, game meats and melt in your mouth Tasmanian venison ... this is the true taste of the Huon."

Interesting Historic Buildings
In the main street are two projects which demonstrate the commitment of the local community. Check out the Palais Theatre (1911), once the local Town Hall, which has been revitalised and become an integral part of the town's cultural life and the Lock Up which has been moved and located on the river side of the main street. The sign on the side of the small, neat building explains: "This small double cell block, locally known as the 'Franklin Lockup', is one of several 19th century cells of similar design that existed in the Huon Valley. It is very likely that the lockup was built by Alexander Adams in July 1889 and designed as a portable holding cell for short-term use."

A Brief History of the Remarkable Lady Jane Franklin
By any measure Lady Jane Franklin was a remarkable woman in an age when the wives of Governors (her husband was Sir John Franklin, Governor of Van Diemen's Land - 1836-43) were not expected to play an active role in the running of the colony.

The Australian Dictionary of Biography notes that she was "A woman of idealism and great mental activity, she was determined to assist in the creation of an 'infant nation' (her friend Dr Arnold's phrase) rather than to play the traditionally passive role of governor's lady in a convict colony. In this aim she succeeded. Through her efforts Tasmania became the intellectual centre of the Australian colonies during Franklin's term of office."

She was always championing socially committed projects. In 1841 she attempted to establish a "Tasmanian Ladies' Society for the Reformation of Female Prisoners" which sadly, because of entrenched criticism from a section of society, failed. Concerned about the fate of the local Aborigines she adopted a girl named Mathinna who had been born on Flinders Island. Mathinna lived with the Franklins at Government House.

Perhaps her most famous project was the removal of all snakes from Tasmania. She offered one shilling for every snake's head and it is claimed that in one summer she paid out £600 - that's 12,000 snake heads.

In 1839 she purchased 640 acres from John Price at Price's Creek. Price was a particularly nasty piece of work who had been the Muster Master of convicts in Hobart and the Commandant of Norfolk Island from 1846-1853. He was so intensely disliked that in 1857 he was murdered by convicts in Victoria. No fewer than 15 convicts attacked him and seven of them were hanged for the crime. But I digress ...

Lady Jane's plan was to provide land for poor but hard working people. Her commitment to the project was so great that she interviewed every applicant before handing over the 100 acre allotments.

Ironically "The Settlement", as it became known, was not an immediate success because the settlers were so poor they could not buy food. They had to grow their own and supplement it with fish from the river and eels which they caught on the mud flats. At the same time they had to cut, split and saw timber to earn money for necessities. These survival activities left little time to develop their holdings. An added difficulty was the swampy foreshore which was covered with dense tea tree scrub. It is a comment on the failure of the settlement that when the Franklins left Tasmania in 1843 many of the original settlers moved elsewhere.

The main township, which was known simply as "The Settlement", and then renamed Franklin in honour of Lady Franklin, grew up around Fleurty's Rivulet and Prices Creek. It became the biggest township on the Huon River with a large number of stores, some fruit processing factories, and a grain mill which was established by John Clark. Lord and Lady Franklin used to stay at Clark's Mill at Woodside on their visits to the Huon. To commemorate these visits a cypress tree was planted next to the jetty where the Franklins used to tie up in their boat, the Huon Pine, which had appropriately been built of huon pine at Port Davey.

* Prior to European settlement the area was occupied by the Melukerdee Aboriginal people of the Huon River who regularly moved from the river wetlands to the surrounding hills.

* The first European in the district was a convict 'bolter' named Martin who settled beside the Huon River around 1820. He built a reed and slab hut with a stone fireplace near Prices Creek and successfully cultivated potatoes.

* During the 1820s John Price (known as a vicious overseer at Norfolk Island and after whom Prices Creek is named) built a rough hut on Prices Creek. Price sold 640 acres of his land to Lade Jane Franklin.

* In 1839 Lady Jane Franklin distributed her 640 acres of land to poor but honest settlers in 1839. Lady Franklin's commitment to the project was so great that she interviewed every applicant before handing over the 100 acre allotments. The area became known simply as "The Settlement".

* In the 1840s and 1850s many of the early settlers at "The Settlement" moved away and settled along the river. The Geeves family moved to Lightwood Bottom in 1850 and founded Geeveston; the Judd brothers founded Juddbury and the Sherwins moved just south of Juddbury to Forest Home.

* A local post office, initially called Huon, was opened in 1848.

* In 1912 the Palais Theatre was opened as the Town Hall by the Governor of Tasmania, Sir Harry Barron.

* In 1916 the town got electricity. It was generated by a small hydro-electric system which used the water from Price's Creek.

* In 1922 the foreshore at Franklin was reclaimed in anticipation of the town becoming a major centre. This never eventuated.

* In 1929 the local government of Franklin was moved to Huonville.

* In 2000 the Palais Theatre was reopened with a Grand Ball attended by the Governor of Tasmania, Sir Guy Green.

There is an interesting and unusual website: Franklin and Friends - http://www.sturmsoft.com/franklinfriends - which offers interesting historic information about the town. 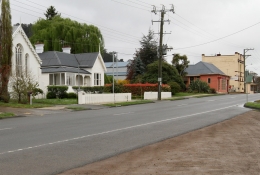 The main street in Franklin. 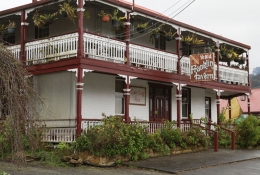 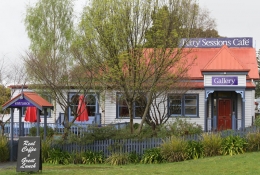 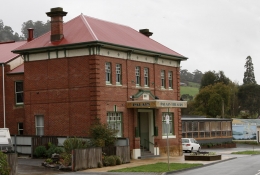 The Palais Theatre, once the Franklin Town Hall. 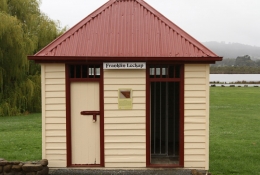 The Franklin Lockup (1889) designed as a portable cell. 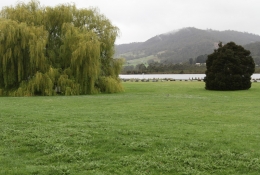 The park between the main road and the Huon River at Franklin. 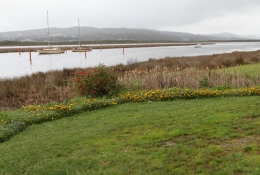 The Huon River and Egg Island off the shore at Franklin.