Gatton is a rural town lying between Ipswich and Toowoomba in the agriculturally rich Lockyer Valley. In 1897 Gatton College was established. It remains at the centre of the town's intellectual life. In 1898 it achieved national notoriety when Norah, Ellen and Michael Murphy were murdered in circumstances which still remain unsolved. Today the town is an important service centre for vegetables which are sent to the Brisbane markets. The district also produces lucerne hay and dairy cattle - all prosper on the rich, black soils of the Lockyer Plains.

Gatton is located 90 km west of Brisbane and 104 m above sea level. It lies between Ipswich and Toowoomba.

No one knows for sure why the tiny settlement established on 13 April, 1855 was named Gatton. Some sources claim that it was named after Gattonside in Scotland and there is a Gatton Park in Surrey.

Lockyer Valley Cultural Centre
In 2009 a very handsome Cultural Centre on Lake Apex at the Toowoomba end of town was opened. It is an ideal place to start any exploration of the town as it is very close to both the Cemetery and the Lights on the Hill Memorial. The Cultural Centre includes an excellent Visitor Information Centre (it provides an excellent map of the town and a range of brochures) as well as an Art Gallery and the interesting Queensland Transport Museum. Contact (07) 5466 3426 for more details.

Queensland Transport Museum
The Queensland Transport Museum is located in the Lockyer Valley Cultural Centre. It features over 200 forms of transport including historic fire engines, old trucks and a large display of the History of Western Maranoa Transport, a company which, at its peak, had over 500 vehicles and serviced every mainland state. For opening times visit https://www.luvyalockyer.com.au/queensland-transport-museum

Lake Apex and Lake Freeman
Located next to the Lockyer Valley Cultural Centre, Lakes Apex and Freeman have been established as natural wetlands. They have three islands which have become safe breeding grounds for a number of species. 153 species of bird have been identified on the two lakes. They can be viewed from bird hides and from the pleasant lakeside walks. The Visitor Information Centre has a brochure with photographs of many of the birds that can be spotted. It is divided into water birds, raptors, parrots and 33 "other birds". It is possible to see Cattle Egrets as well as the small Golden-headed Cisticola, Red-backed Fairy-wren and Australian Reed-Warbler. Check out http://luvyalockyer.com.au/accom_result1/lakes-apex-freeman-wildlife-sanctuary-parkland/ for more information.

Gatton Cemetery
It was the great, unsolved crime of the time. On 26 December, 1898 Norah and Ellen Murphy and their brother Michael were, as the Toowoomba Chronicle recorded "most brutally outraged and then murdered" and the crime was never solved.
The Murphy family lived on a farm outside Gatton. On 26 December Michael had hitched the family cart to a horse and driven his sisters to a dance at the Gatton Divisional Hall. They left their parent's farm around 8.00 pm and arrived in Gatton an hour later only to find that the dance had been cancelled due to a lack of young women.
The trio decided to return home and on the way they were murdered. When their bodies were found the next morning Michael and his sister Ellen lay back to back with their hands tied behind them while Norah was on a neatly spread rug with her hands also tied behind her back. They had all been beaten to death and the cart horse had been shot.
The local paper reported the murders in ghoulish detail: "The doctor found Michael Murphy had his skull broken with a stick or blunt instrument; also that Nora and Ellen had been treated in a similar manner.
"In the case of Norah it was also found that her brains were protruding, and that she had a harness-strap tied round her throat so tightly that it of itself would cause death. She also had an incised wound on the outside of her right eye about 2 inches long, as if cut with a knife, and several scratches on her face.
"The medical evidence further states that both girls were most cruelly outraged prior to death."
The subsequent investigation was a classic piece of police bungling. Within hours there were up to forty people wandering around the murder site. The police did not reach the scene of the crime until the next day. The doctor who examined the bodies failed to find a bullet in the head of Michael Murphy and the prime suspect, an itinerant labourer named Thomas Day, was allowed to leave town and was never heard of again.
The evidence pointed strongly towards Day. He was living in stables near to the scene of the crime. He had been seen standing by the sliprails of the paddock where the crime was committed. It was claimed that he had washed blood from a pullover a few days after the murder. The evidence was powerful but he simply packed up his swag and and was allowed to depart.
The graves of Michael, Norah and Ellen Murphy can be seen in the Gatton cemetery. There is an excellent book on the events: The Gatton Mystery by James and Desmond Gibney.

Weeping Mother Memorial
Located in Hickey Street in Littleton Park, this is an important and unusual memorial recalling the role of women in the time of war. The Queensland Heritage Register records that it was designed and produced by Ipswich mason, Frank Williams for a cost of £500 and the foundation stone was laid in 1922. It also records: "The monument itself stands on a concrete base step. Above this are two smooth-faced marble steps capped by a rounded moulding. The first step is square in plan, whilst the upper one steps in at the centre of each face.
"Above this base is a mausoleum type structure comprising four columns and a roof. The floor, from which a central square pillar rises, is laid with black and white marble tiles in a chequerboard pattern. The pillar sits on a base of two steps and is partially covered with a tasselled shroud. It bears the leaded names of the 68 local men who fell in the First World War. The names of those who fell in later conflicts are recorded on the base of the pillar; 23 in the Second World War and 2 in Vietnam.
"The pillar is flanked by columns at each corner. Each has simply moulded bases, and Greek egg and dart ornamentation at the top. The columns support a roof like structure which sits on square blocks at each corner. A curved fascia  spans between each block and the roof structure has a pediment to each face. The dates 1939 - 1945 are leaded on the front face. At the centre of the roof is a square base with a mound of rocks above it. Sitting on this is a two thirds life size figure of a weeping mother. Her chin rests on her right hand and she holds a scroll which bears the leaded inscription Their names liveth for ever more." Check out https://heritage-register.ehp.qld.gov.au/placeDetail.html?siteId=15286 for more details.

Gatton and District Historical Society Museum
Located at 10 Freeman Road beside Lake Apex, the Gatton and District Historical Society Museum provides an insight into the history of the town and the district. It is a typical local museum with local memorabilia in the Main Hall (it was a dance hall at Caffey which was moved to the site in 1978) and a number of buildings including the Blenheim Rural Automatic Telephone Exchange, a Machinery Storage Shed, a Fire Station and a Logan Engine Shed. Please contact the Society at gdhs4343@gmail.com for the latest opening times or for any further information.

Gatton College
In 1897 the University of Queensland's established a training college for young farmers at Gatton. Located on 1068 ha it is only 5 km from Gatton on the Warrego Highway. It has become one of the most prestigious rural colleges in Australia with the  website proudly explaining that its students have "access to world-class facilities in animal science with the $100 million School of Veterinary Science which includes a Veterinary Medical Centre, Veterinary Teaching Laboratories and a Clinical Studies Centre. A Native Wildlife Teaching and Research Facility has also been purpose built to house native endangered species. These include Julia Creek Dunnarts, Mahogany Gliders and Bridled Nail Tail Wallabies. These facilities along with the Centre for Advanced Animal Science which conducts animal research in the areas of animal growth, adaptation, welfare, health and vaccines make the Gatton campus a hub for animal excellence in teaching and research." For more details check out http://www.uq.edu.au/gatton/about-uq-gatton. There are tours of the campus, tel: (07) 5460 1229.

Helidon Heritage Walk
Lying 18 km west of Gatton on the road to Toowoomba is the tiny township of Helidon. There is an interesting Helidon Heritage Walk (the brochure is available at the Gatton Visitor Centre) which lists 22 places of historic interest around the town. The history of each place is recorded on plaques set in sandstone.

* Prior to European settlement the area was occupied by members of the Yuggera Aboriginal language group.

* The first European into the Gatton area was the explorer Major Edmund Lockyer (after whom the Lockyer Creek was named) who passed through the area in 1825. He had been commissioned to explore the Brisbane River.

* The area began to be settled in 1841 when land west of Moreton Bay was opened up to free settlers.

* On 13 April 1855 the village of Gatton was officially gazetted,

* By 1858 the town had become an important stopover point on the route from Brisbane to the Darling Downs. It was used as a changeover point for the horses on the Royal Mail.

* The town was officially proclaimed and surveyed in 1859.

* In 1866 the railway line from Ipswich reached the area. Around this time farmers from Germany and Ireland moved into the area.

* The Gatton Agricultural College was established in July, 1897.

* On 26 December 1898 the sisters Norah and Ellen Murphy and their brother Michael were murdered in particularly strange circumstances. The crime became known as the Gatton Murders. It was never solved.

* In 1904 a Dairy factory was established in the town.

* On 10 January, 2011 the Lockyer Creek flooded causing considerable damage to the town. At the time the town's population had reached 6,869. 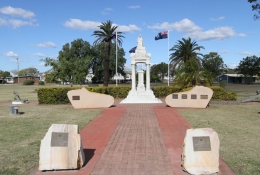 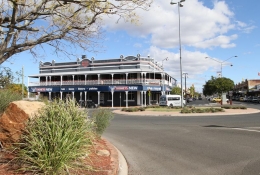 The Royal Hotel and the main street of Gatton. 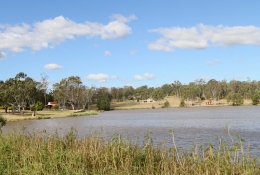 The view across Lake Apex towards the Light on the Hill memorial. 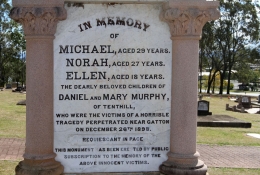 The headstone recording the deaths of the Murphy children - a result of the town's most infamous unsolved murder. 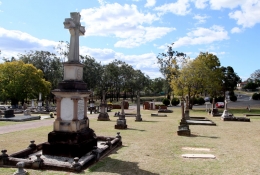 The grave of the Murphy children in the Gatton cemetery. 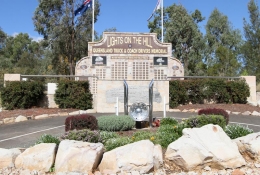 The Lights on the Hill Queensland Truck & Coach Drivers Memorial. 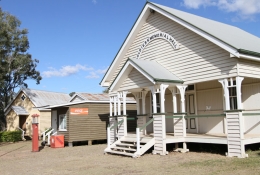 Some of the buildings at the Gatton and District Historical Society Museum. 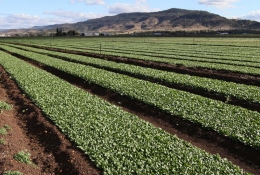 The black soils around the town are rich and productive.