Geeveston is one of those rare towns that celebrates its historic reason for existence on nearly every street corner. It is a model example of how a town, devastated by the departure of a major industry, can with real creativity, find a new life and revitalise itself. Historically Geeveston was a timber town. It was economically dependent on the local timber industry. For nearly 100 years the southern forests fed sawmills and an APM pulp mill and employed, directly and indirectly, nearly 400 people from the town. Then the APM Pulp Mill closed down in 1982. The town was devastated and decimated. The southern forests were protected and the timber town had no future. But with remarkable tenacity, and driven by the local post master, Laurie Dillon, they started to think laterally. Today it is a town driven by tourism. It is a triumph with every street featuring statues of local people carved out of timber; with shops and businesses in the town thriving on tourism; with an outstanding Forest & Heritage Centre (now known as the Geeveston Visitor Centre); and with the remarkable Tahune Airwalk being proudly promoted as "the longest tall tree walk in the world."

Geeveston is located 60 km south-west of Hobart on the Huon Highway.

One of the early settlers at Lady Jane Franklin's experimental community 'The Settlement' was a man named William Geeves. Life was so hard at The Settlement that a few years after Lady Franklin returned to Britain, Geeves and his family moved to Lightwood Bottom. The town's name was changed to Geeves Town in 1861 and this eventually became Geeveston.

Tahune Airwalk
Opened in July, 2001 the Tahune AirWalk (similar to the Illawarra Fly at Robertson, the Otway Fly in Victoria and the Treetop Walk near Denmark in Western Australia) is a superb opportunity to walk 20-48 metres above the ground through stands of Huon Pine, Myrtle, Leatherwood, Stringybark, Sassafras and Blackwood. The experience, which took three months to build at a cost of $1.3 million (total cost $4.5 million) was the brainchild of the local mayor, Greg Norris. The walk is 596.9 metres long, can sustain the weight of 120 people and is a unique opportunity to experience life in the top sections of the area's great trees. There are a total of three walks which can take up to 2.5 hours to complete. For more information, pricing and opening hours check out http://tahuneairwalk.com.au or tel: 1300 720 507

Wooden Sculptures of Local Heroes
The first thing the visitor notices are the statues, not of famous people, but of local heroes which have been carved out of timber by Bernie Tarr who uses a chainsaw and chisel to create his works. "There's the swearing chemist who has his glasses put on every morning, the blacksmith, the policeman, Olympic rower Simon Burgess, and a fondly remembered elderly lady [Jessica Hannabury] renowned for her generosity." As well there is an apple picker beside the huge Swamp Gum, a rather dour John Geeves (the town's founding father), a couple outside the local bakery and a timber worker in the Forest & Heritage Centre. They are worth inspecting to gain an insight into the people who are part of the town's history.

Forest & Heritage Centre now known as the Geeveston Visitor Centre
At the end of the main street is the remarkable Forest & Heritage Centre (Geeveston Visitor Centre) which has an impressive display recounting the history of the timber industry in the local area. It is also the town visitor centre and is often staffed by people known as Green Jackets who are happy to advise on places to visit in the area and to tell stories of the history of the town.

Heritage Park and the Platypus Lookout
Over the road from the Forest & Heritage Centre is Heritage Park which, with some optimism, has a Platypus Lookout. You might see a platypus - particularly if you visit the park early in the morning or late in the afternoon. Watch for a line of bubbles and cross your fingers.

Swamp Gum
Located on the corner of Huon Highway and School Road is the huge trunk of a Swamp Gum (eucalyptus regnans), the tallest flowering plant in the world, which was logged in Arve Valley on 10 December 1971. A sign on the side of the trunk explains that the length is 15.8 m, the girth 6.7 m, it weighs 57 tonnes and its volume 56.7 cubic metres. This kind of timber is sold as Tasmanian Oak.

Cambridge House
Now a B&B this house, built in 1868 by John Geeves, is one of the earliest buildings in the town. It is typical of a prominent house of its era and was bombed in 1922 during a timber worker's strike.

Bendigo Bank
It is just a bank but it has the honour of being the first community bank in Tasmania. The locals raised $600,000 and the bank was opened to fill a gap which had been left when the previous banks closed their doors after APM Paper Mills closed in 1982.

Hartz Mountains National Park
Located 15 km from Geeveston, the Hartz Mountains National Park is part of the Tasmanian Wilderness World Heritage Area and lies at the edge of the south-west wilderness. It combines glacial features (the whole area was glaciated during the last ice age - the Huon Valley is a classic U-shaped glacial valley) with unusual flora (over 200 plant species have been identified) and fauna including alpine heath and wet eucalypt forests. Hartz Mountain, which rises to 1,254 m is part of an uplifted dolerite plateau. It is surrounded by glacial lakes, the largest of which is Lake Hartz. It also is characterised by extensive morainal deposits. The park's flora includes alpine moorland, Tasmanian waratah, Tasmanian snow gums, yellow gum and Tasmanian climbing heath. Much of the area is covered with an alpine heath which is characterised by stunted trees and areas of open windswept heathland.

There are a number of walking tracks and nature trails in the park and the Arve Loop Road, which leads to the park, passes through some of the most beautiful rainforest in the country. For more information check out http://www.parks.tas.gov.au/?base=3396.

The park has six walks - three short and three longer day walks. (i) The walk to Waratah Lookout is only five minutes return. It overlooks the Huon Valley and, in December and January, is an ideal place to see Tasmanian waratahs. (ii) Arve Falls - this is a short twenty minute walk through snow gums and an alpine herb field to the Arve River (iii) Lake Osborne - this is a 45 minute return walk through forest to a glacial lake. There are morainal deposits and stands of myrtles and sassafras along the way. The longer walks (two of which are listed in 60 Great Short Walks) are (i) a 90 minute return walk to Lake Esperance through woodland, cushion plants and King Billy pines; (ii) the two hour walk to Hartz Pass which, although steep, offers superb views over the Wilderness area; and (iii) Hartz Peak - a 3-4 hour return walk to the peak which should only be attempted by experienced bushwalkers.

* Prior to the arrival of Europeans the area was occupied by the Tahuni Lingah and Melukerdee people who lived off plants, animals and seafood. They did not live permanently in the rainforest.

* The first European explorers arrived in the area as early as 1804 but the density of the forest led to the conclusion that it was not suitable for settlement.

* In 1839 John Price, an early settler at Franklin, sold 640 acres of his land to Lady Jane Franklin who distributed the land to poor but honest settlers. The area became known simply as "The Settlement".

* The first European settler in the district arrived in 1842.

* By the 1840s and 1850s, after Lady Jane had returned to England, many of the early settlers at "The Settlement" moved away and settled along the river. The Geeves family moved to Lightwood Bottom in 1850.

* In 1861 the town's name was changed to Geeves Town and this eventually became Geeveston.

* In 1874 John Geeves built the Speedwell steam-driven timber mill, one of the largest sawmills in the southern hemisphere.

* Historically the economy of Geeveston, until the 1980s, was driven by apple growing and timber. By the late 1890s there were 552 orchards in the area.

* By the 1920s the town had one of the first paper pulp mills in Australia.

* In 1962 the Australian Paper Mills pulp mill opened and became one of Geeveston's  biggest employers.

* In 1988 the APM Paper Mill reopened but it only lasted for six months.

* In 1997 the Regional Forest Agreement guaranteed that the timber in the area would be protected for the next 20 years.

* In 2000 the Tasmanian Government announced that it would spend $4.5 million on the AirWalk.

Geeveston has one of the best sushi chefs in Australia, Masaaki Koyoma, who purchased the Geeveston Church. Check out https://www.facebook.com/Masaakis-Sushi-Geeveston-133400560012836.

Geeveston has a unique website called Geeveston Central where local businesses and services have a home page which directs visitors through to their unique sites. Check out http://www.geeveston.net. It is a smart celebration of the diversity of the local community. 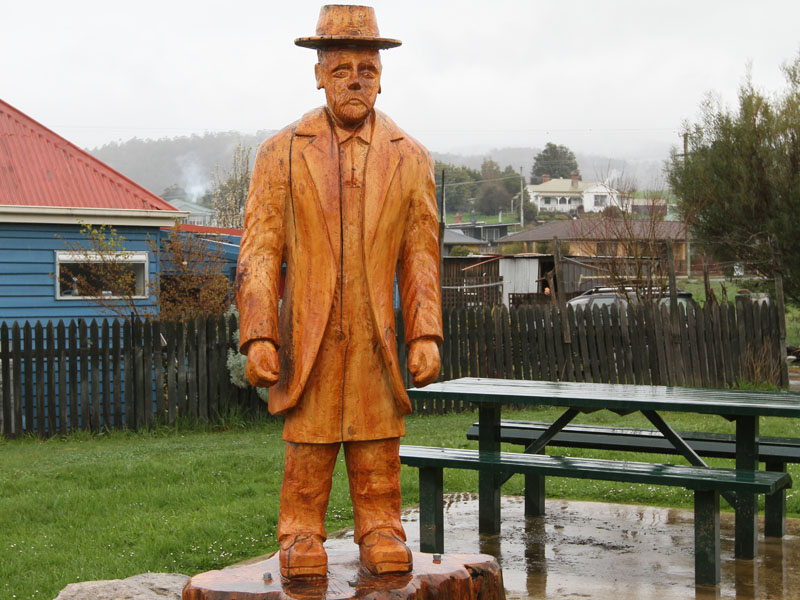 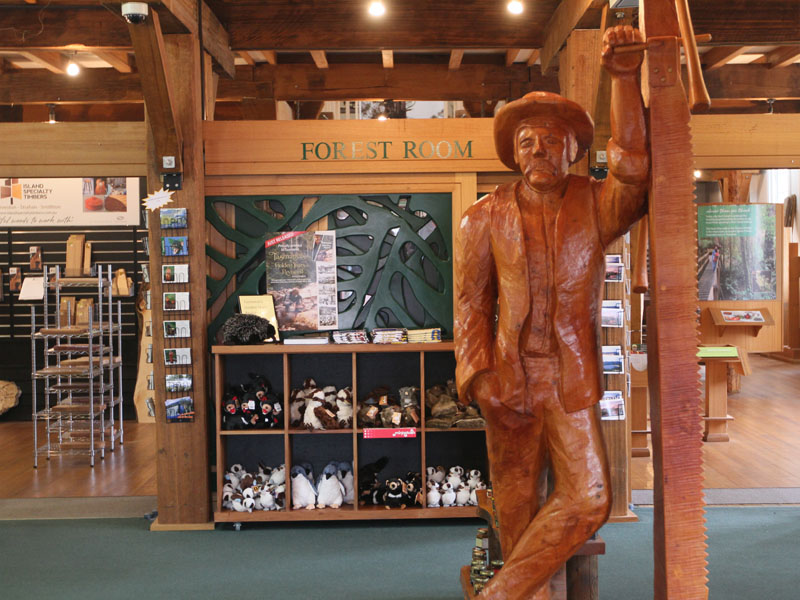 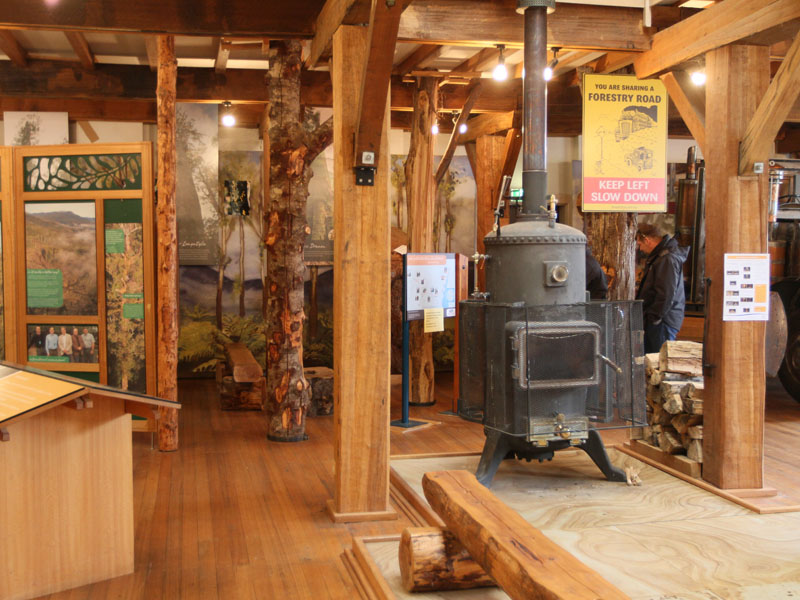 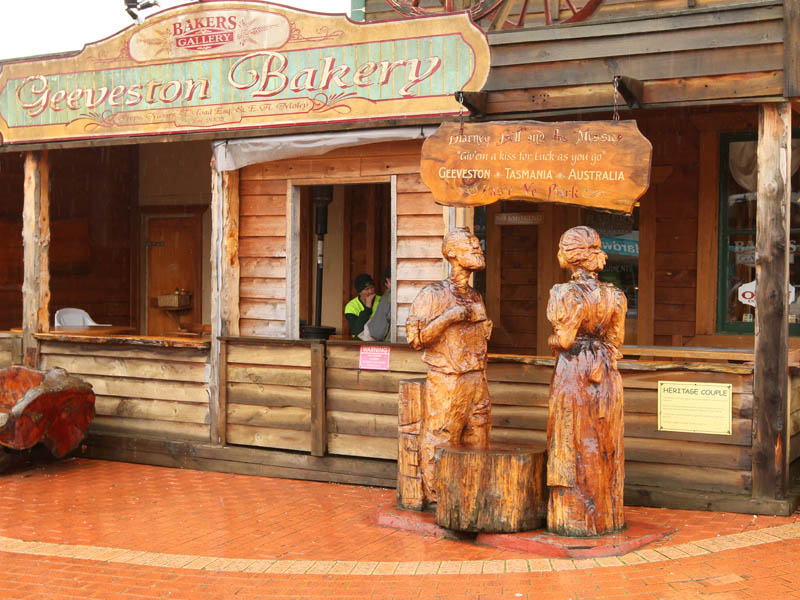 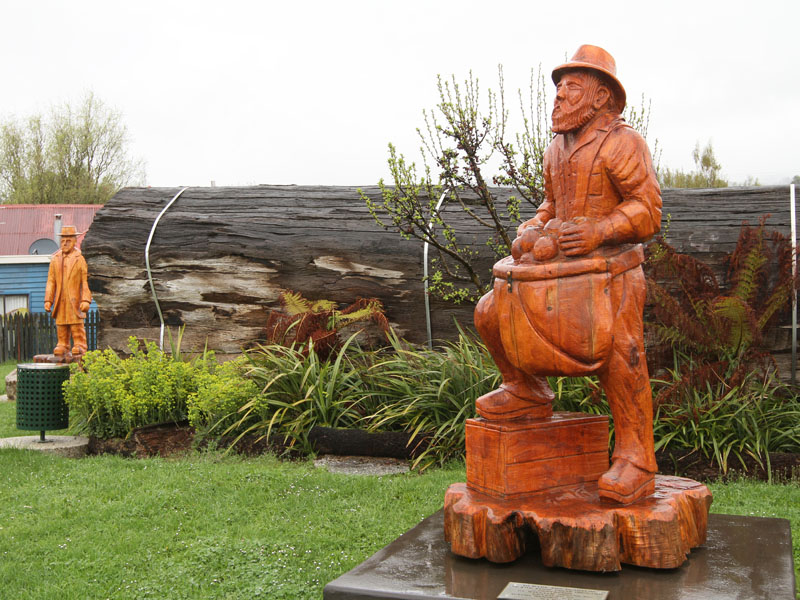 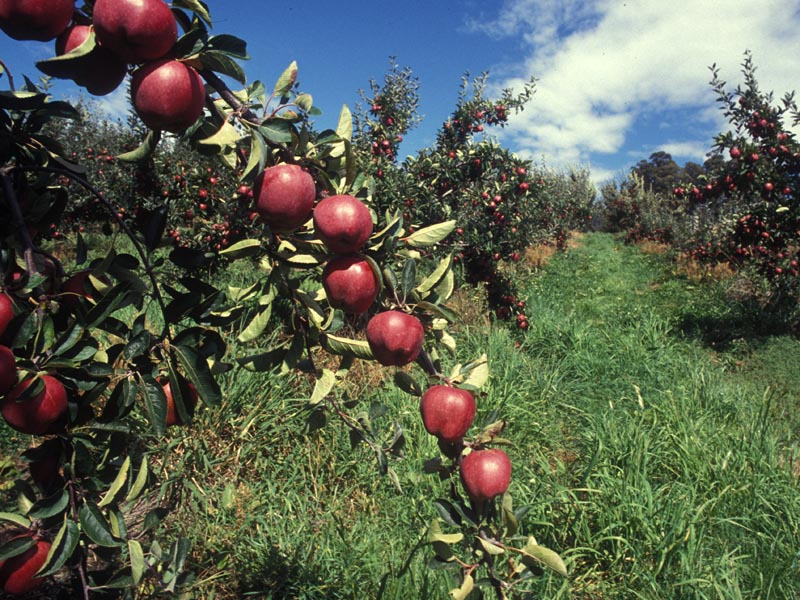 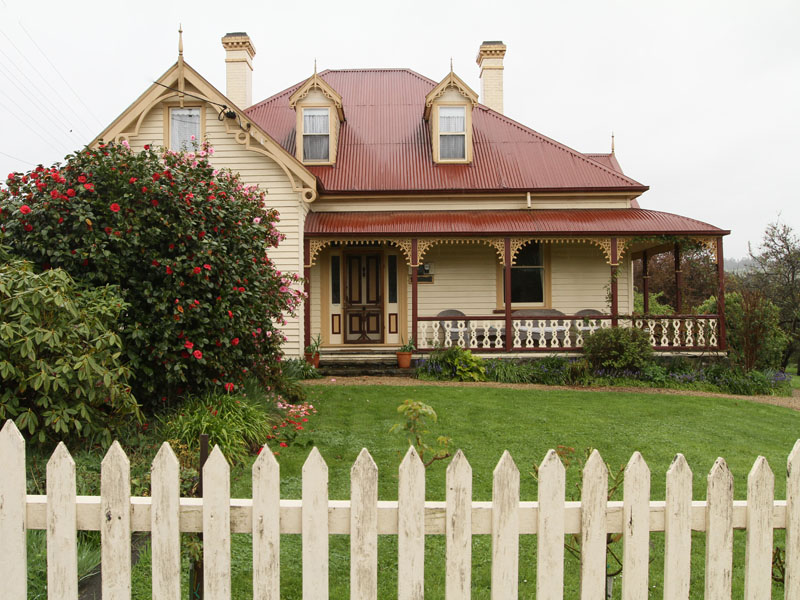 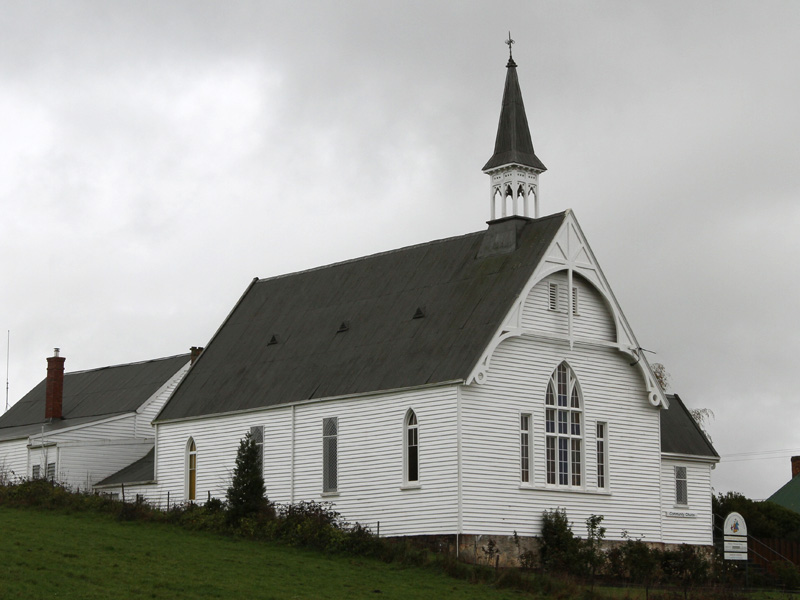