Tiny village on the Princes Highway

The tiny village of Genoa is little more than an historic hotel, a general store, an interesting historic bridge, a rest area and a pleasant walk around a small number of local houses. The village is surrounded by fertile dairy floodplains and is located on the wild and beautiful East Gippsland coast. It provides ready access to Mallacoota, Gipsy Point and the wetlands around the town are noted for the vast flocks of black swans. It is primarily the point where people leave the Princes Highway for the Croajingolong National Park. There are a number of informative signs around the town which provide historic photographs and interesting information about the main buildings.

Genoa is located 492 km east of Melbourne via the Princes Highway. It is the last township on the Princes Highway before New South Wales - or the first town in Victoria. Situated on the Genoa River, it is 62 km south from Eden, 123 km north-east from Orbost and 23 km from Mallacoota.

No one is sure how Genoa was named (presumably after the Italian port of the same name) but in the early years of European settlement there was a property and a river both named Genoa. The Genoa River has been described as "a mostly perennial stream rising on the Border of New South Wales and Victoria about 10.5 km west by south of Nungatta Mountain. It flows for about 85 km into Mallacoota Inlet."

Historic Genoa Hotel
The sign outside the hotel reads: "The building was originally a two storey pise (rammed earth walled) structure. Unfortunately fire destroyed the top storey in 1933. Genoa's first liquor license circa 1897 was held at the Maramingo Hotel (across the river) this was transferred to Alexander's boarding house (Bass Street) circa 1913 until it was finally transferred to the Genoa Hotel."

Genoa General Store
Recalling the history of the Genoa General Store the sign notes that it "was originally built circa 1923 by Harry Bridle. The store was also the local post office, agency for the State Savings Bank of Victoria and local bakery. Murray Goulburn Co. purchased the store in the late 1960s, had it demolished and replaced it with the present typically 1960s structure. The Genoa store had a succession of owners and closed in 2001. The post office license transferred to the Genoa Hotel."

Genoa Timber Truss and Concrete Bridge
No visit to the town is complete without walking across the Genoa Timber Truss and Concrete Bridge and standing on the banks of the Genoa River which offers excellent views of the bridge. There is a detailed history of the bridge which explains that "Before this timber truss and concrete bridge was constructed between 1926-1928 by contractor J.T. Noble Anderson, two earlier bridges crossed the Genoa River at this location. They provided crucial links in the Princes Highway route from Melbourne to Sydney. The bridge was open in 1928 ... initially used by horse drawn and motor vehicles the development of heavier and faster cars and trucks meant that the design and materials of this bridge could not withstand the greater structural stresses. In 1989 the bridge was decommissioned after a new bridge was constructed 130 m downstream. The Genoa Town Committee achieved State Significance in 1995 and after much lobbying saved the bridge from demolition and persevered to achieve its preservation and restoration in 1997. The 100 metre long bridge designed by the Country Roads Board is a parallel girder truss structure that makes use of hybrid elements comprising reinforced concrete piers, timber superstructure and timber piled abutments. In 2010 the approach spans and collapsing timber abutments were removed but the most significant features were retained:  these include the technically significant timber trusses and concrete piers, and the aesthetically significant views from the riverbanks. Access to the truss spans has been preserved by the addition of steel gangways for ongoing maintenance and for pedestrians and cyclists to walk over the bridge." On the northern side it is possible to access the banks of the river from the caravan park.

Genoa Rest Area
Located across the bridge from the village the Genoa Rest Area has an area where it is possible to camp for the night. Nearby is a large rock which has a strange, large, striped lizard-like creature with a plaque that explains that it "commemorates the discovery by Norman Wakefield, and verified by palaeontologist James Warren, in 1971, of footprints laid down on sandstone of the upper Genoa River Gorge, Coopracamba National Park, in mid Devonian times, around 390 million years ago. The life-size sculpture depicts Tetrapod, thought to be responsible for creating the footprints set in concrete below, taken from a cast at the discovery site. Tetrapods (animals with four feet) were the first animals to evolve on the land from water. Their predecessors were fish, they resemble very large salamanders."

Wingan Nature Walk
From Genoa there is a 34 km gravel road to the Croajingolong National Park where the Wingan Nature Walk (which lasts about 90 minutes) heads off from the camp site through stands of bloodwoods, melaleucas, swamp paper-barks and wild cherry trees. The fauna in the area includes feathertail gliders, eastern water skinks, kookaburras, sugar gliders, lyrebirds, eastern whipbirds and possums. The track continues to Fly Cove (named after the local sand flies - you have been warned!) where George Bass anchored in 1797. This windswept coast is home to soldier crabs and pelicans. The Skerries (islands which can be seen from the beach) are an important habitat for Australian fur-seals and little penguins. There is a very detailed description of the beach and the walk at http://beachsafe.org.au/beach/vic042.

Genoa Peak Walk
Located south of Genoa, running off the Princes Highway, is Genoa Peak Road. 8 km along the road is a car park where there is a track to the top of Genoa Peak which offers superb views over the Croajingolong wilderness coastline, Gabo Island and the Mallacoota Lakes. The walk is 1.5 km return, takes 2 hours and is suitable for most ages and fitness levels. The track has short steep sections, a rough surface and a steel ladder to the top viewing platform. Check out http://www.visitmelbourne.com/Regions/Gippsland/Things-to-do/Outdoor-activities/Walking-and-hiking/Genoa-Peak-Walk.aspx for more details.

Gipsy Point
Located 10 km downstream on Mallacoota Inlet, Gipsy Point has become a boutique hideaway for anglers looking to try their luck in the Mallacoota Inlet and people seeking a quiet retreat on the edge of the Croajingolong National Park. The main attraction is Captain John Gerard's Wilderness River Cruises which run from the jetty on Sundays, Tuesdays and Fridays. Tel: 0418 279 997 from 8.00 am - 9.00 pm. The cruise lasts 2 1/2 hours and, as the brochure explains: "After taking in the sights of Gipsy Point and negotiating the Genoa River sand flats we arrive at the deep still waters of the 'Rock Wall' where we view the giant nest of the Sea Eagles. Then on to the wilderness waters of the rarely visited Maramingo Creek, famous for its pristine beauty and abundant birdlife, and home to the beautiful azure kingfisher. Here the Sea Eagles are fed providing excellent photo opportunities as they swoop within metres of the boat. After exploring the upper regions of the creek we anchor at beautiful 'Jumping Mullet Bend' whilst afternoon tea is served. This is a scenic cruise with interesting commentary aboard the comfortable all-weather cruise boat Gypsy Princess."

* Prior to the European settlement the area was the home of the Jinoor Tinnong Aborigines who were part of the Bidwell-Maap nation.

* In 1838 Alexander Weatherhead drove 500 cattle from Genoa across to Adelaide and sold them for £20 a head.

* Genoa got its first liquor license in 1897 at the Maramingo Hotel.

* In 1916 a parallel truss bridge was constructed across the Genoa River.

* The floods in 1919 destroyed the bridge

* In 1923 Harry Bridle built the town's first general store. It was also the post office and a bank.

* In 1928 the present bridge, reinforced with concrete piers, was opened.

* The first Genoa Hotel was destroyed by fire in 1933.

* In 1971 the footprints of a Tetrapod were discovered by Norman Wakefield, and verified by palaeontologist James Warren, in the upper Genoa River Gorge. 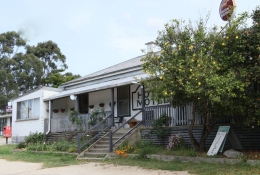 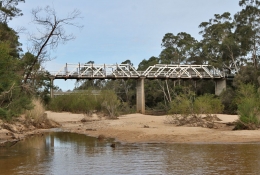 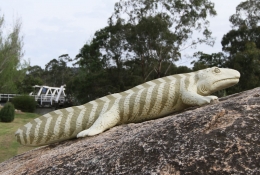 The tetrapod sculpture on the rock in the Rest Park. 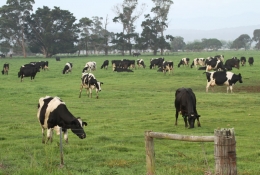 Fresian dairy cattle near the road between Genoa and Gipsy Point. 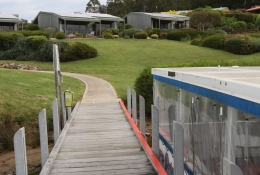 Boutique accommodation near the jetty at Gipsy Point. 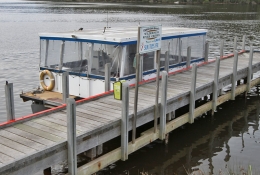 The Gypsy Princess moored at the jetty at Gipsy Point.