Historic town at the mouth of the Tamar River

George Town is now a modern administrative centre but historically it was an important centre - the third oldest British town in Australia - with convicts, overseers and a vital role in the development of the colonies of Van Diemen's Land and Victoria. Today the economy of the town is driven by a combination of its importance as an administrative centre and its proximity to the aluminium smelter at Bell Bay. It has become a popular holiday and tourist destination as a result of its history and the attractiveness of the surrounding coastline.

George Town is located 249 km north of Hobart via National Highway 1 and 51 km north of Launceston via the East Tamar Highway.

The town was named after King George III by Governor Lachlan Macquarie in 1811.

George Town Watch House Museum
A suitable starting point for visitors to George Town is the Old Watch House Museum in Macquarie Street which was originally the local lockup for both male and female offenders. Originally built in 1843 it has been restored and now displays which offer "an insight into the region's history and include a model village of 19th century George Town, 'Departures & Arrivals' bonnets display, the history of the George Town Female Factory, panels outlining the history of the region and changing displays." It is open 10.00 am to 4.00 pm weekdays (10.00 am - 3.00 pm in the winter months) and 1.00 pm to 3.00 pm weekends. tel: (03) 6382 4466.

Bass and Flinders Centre
Located at 8 Elizabeth Street, George Town, (tel: 03 6382 3792) the Bass and Flinders Centre is open from 10.00 am - 4.00 pm in summer and 11.00 am - 3.00 pm in winter. It is primarily a celebration of the HMAS Norfolk which was the vessel used by Bass and Flinders in 1798 to cross Bass Strait, sail around Van Diemen's Land and establish that Tasmania was an island. A replica is berthed at the centre and it is possible for visitors to board and inspect the vessel. The replica, captained by Bern Cuthbertson, replicated the original voyage in 2006. Visitors learn about the voyages both of Bass and Flinders and of Bern Cuthbertson as well as inspecting historic displays and other vessels associated with Tasmania. The most interesting is the Elizabeth, a replica of the whale boat used by Captain John Kelly to sail around Van Diemen's Land in 1815-16.

The Grove
'The Grove', an elegant three-storey bluestone house with a sandstone fascia and window and door surrounds is located at 25 Cimitiere Street and is now a B&B. It was probably built in 1829 (some say it dates from 1835) and was occupied in the 1830s and 1840s by Mathew Friend, the port officer and magistrate. The house is not open for inspection. tel: (03) 6382 1336 for more information or check out http://www.thegrovetas.com/

Paterson Memorial
In November, 1804 William Paterson ran the HMS Buffalo aground at York Cove and, being entrepreneurial and patriotic, duly ran up the flag, fired three volleys in the air, and played the national anthem. He had been sent by Governor King to establish a colony on the northern coast of Van Diemen's Land. Paterson only lasted a few weeks. He moved to the western side of the Tamar where he established a settlement named York Town. A memorial to Paterson's brief stay in the area stands on Esplanade North at Windmill Point.

Walking the Coastal Path
The Coastal Path is a pleasant 6 km walk along a path beside the Tamar River through nature reserves, past fishing jetties and along quiet beaches. The walk usually takes around 90 minutes one way.

Bell Bay
Located 5 km south of George Town is the industrial port of Bell Bay which, in 1955, became the site of Australia's first aluminium smelter, Bell Bay Aluminium. At the time it was believed that Tasmania's cheap hyro-electricity could be used economically to convert bauxite into finished aluminium and to give a boost to the local economy. That was an accurate assessment. As the Rio Tinto Alcan website explains: "The smelter produces around 180,000 tonnes of aluminium each year and operates 24 hours a day, 365 days per year. Its main metal products are ingot, block and T-bar. The smelter is a major contributor to the economy of Northern Tasmania, creating employment, export earnings, payment of government taxes and charges, direct investment through purchase of goods and services, and community programs Independent studies have found Bell Bay Aluminium directly and indirectly, employs over 1,000 Tasmanians, and contributes $690 million per annum to Gross State Product." In a hard-pressed state that is very impressive.

Today Bell Bay is a thriving port servicing most of northern Tasmania. Its industries are based around aluminium, its thermal power station, its woodchip and paper mills, and its large oil installations.

(2) ) The Low Head lighthouse (it is 12 m high) overlooks the entrance to the River Tamar and was built in 1888 to replace the original lighthouse which was constructed by convicts in the early 1830s.

(3) The nearby Low Head Pilot Station (the oldest in Australia - it was completed in 1835) houses a Maritime Museum which includes memorabilia salvaged from shipwrecks on the surrounding coast as well as some interesting, early diving equipment.

(4) The river track between Pilot Bay and the lighthouse is the best place to watch the fairy (now known as little) penguins come ashore at dusk. In 2013, because of degradation of the area, over one hundred artificial penguin burrows were built and placed on the site. Volunteers have also removed the weeds and tried to improve the habitat of the little penguins. The sensible and quality option is to join the Low Head Penguin Tours, tel: 0418 361 860 or check out http://penguintours.lowhead.com/

(5) Low Head Coastal Reserve was established in 2001 and is part of the Low Head promontory which runs down the west side of the headland.

Lefroy Ghost Town
Lefroy, which is now little more than a ghost town, is worth visiting to see how a prosperous mining town disappears when the reason for its existence vanishes. After the discovery of gold in 1870 it became a prosperous and substantial gold mining town with a population of 5000 around the turn of the century. Now there are only the ruins of a few buildings. It is located off the Bridport Road 16 km east of the town.

* The first European to reach George Town was William Paterson in 1804 who ran the HMS Buffalo aground at York Cove. He camped at the present site of the town but decided to move to York Town a few weeks later.

* In 1811 Governor Lachlan Macquarie established the settlement (it was the third oldest British town in Australia after Sydney and Hobart) and named it after King George III. It was to become the main township on Van Diemen Land's north coast.

* In the 1820s The Grove was built as the port officer's residence.

* In 1835 John Batman sailed from George Town to establish the colony of Victoria. Not surprisingly an active trade with the new colony was established.

* George Town declined as a port in the 1840s but was revitalised in the 1870s by the discovery of gold at Lefroy, 15 km east of the town.

* Today George Town is a service centre for the region. It is economically driven by the aluminium smelter at Bell Bay and the tourist industry.

There is a local website - check out http://www.provincialtamar.com.au/html/george_town.html. The Australian Heritage site has good information on the historic buildings in the town - http://www.heritageaustralia.com.au/search.php?state=tas&region=116&view=14 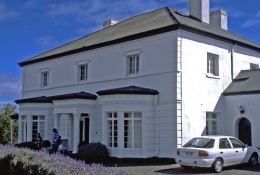 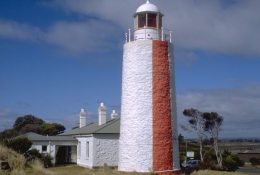 A navigational ‘Lead light’ up river from the Low Head lighthouse 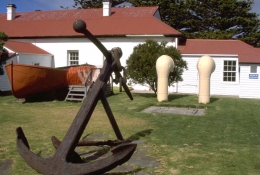 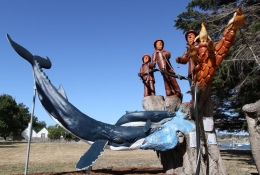 A unique use of a huge branch and stump of a Macrocarpa Pine Tree. 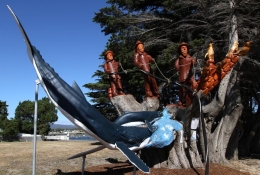 Carved from a dead tree by Eddie Freeman, a chainsaw and chisel artist, in 2013 he has used the branch as a whale and calf and the trunk for three cable men and five penguins.