Historic gold mining town now at the heart of the Gulf gemstone region.

Georgetown is a pleasant, sleepy little town on the Etheridge River which is surrounded by rich beef cattle country and some of the best gemstone areas in Queensland. It boasts one of the finest attractions in Queensland - the Ted Elliott Mineral Collection at TerrEstrial. It is superbly presented and, even if you only have a limited interest in minerals, it is compelling. Equally impressive is Cobbold Gorge - a narrow and impressively beautiful gorge which can be traversed by boat although, at some points, the walls of the gorge are no more than two metres apart.

Georgetown is located 1,885 km north west of Brisbane via Emerald and Mount Surprise. It is 384 km south west of Cairns and 298 km east of Normanton on the Gulf Development Road. It is 299 m above sea level.

The settlement that originally appeared was named Etheridge but by 1871 it had been changed to Georgetown. It was named after the assistant gold commissioner in Gilberton, a man named Howard St George.

TerrEstrial Centre
Officially focussing on the Ted Elliott Mineral Collection, this is the tourist heart of Georgetown. It has internet facilities, is the Visitor Centre and has over 4,500 minerals on display in a huge private collection. It was opened in 2003 and is jointly funded by the Etheridge Shire Council and the Queensland Government. The centre is open 8.30 am - 4.15 pm Monday to Friday, tel: (07) 4062 1485. For more information check out http://www.cairnsunlimited.com/terrestrialgeorgetown.htm. It has detailed information about the Ted Elliott Mineral Collection and stories of Ted's life.
This really is the most impressive mineral display in Australia. Yes, it is that good. it is a series of rooms each dedicated to specific rock specimens. Thus Fossils and Petrified Woods; Agates from the Etheridge Region; Thunder Eggs and Agate Bowls; Quartz; Red Dome Mine (crystals and malachite); Wolfram Enterprise Mine (native copper and molybdenite); Queensland mines (calcite, quartz, opals); Gold and precious minerals; Fluoresced Minerals; and an extensive display of overseas minerals. I am not given to raving about museums or mineral collections but this is simply the best mineral display I have seen anywhere in Australia. Even if you are not terribly interested in minerals, you will be fascinated. It is that good.

The Ant Bed House
Located in South Street, and part of the Georgetown Pioneer Walk, the Ant Bed House was built in 1889 by T.R. Geraghty, the Queensland Government Mining Surveyor. It is heritage listed and the Queensland Heritage Register points out its significance as "The Antbed House is a rare adobe residence which survives as an important illustration of 19th century difficulties experienced in Queensland's far northern goldmining towns in obtaining available, affordable and appropriate building materials. It is the only substantially intact 19th century adobe house identified in north Queensland towns, and is even more rare for its use of antbed (from termite mounds) rather than mud. Adobe houses were rare for both the place and the period, most remote Queensland goldfields buildings being constructed of less substantial and more transportable timber and/or galvanised iron." It notes that "The adobe brick building was rendered externally to resemble stonework, and was a substantial residence comprising a large parlour, wide hallway and two bedrooms in the main house, with wide verandahs on all sides and a detached antbed kitchen house at the rear. Of more imposing appearance than the usual timber and iron Georgetown dwelling, this house could well have been erected for the manager of what started out as a substantial mining enterprise." For more details check out https://environment.ehp.qld.gov.au/heritage-register/detail/?id=601628. It is currently being restored by Terry Walsh who arrived in Georgetown to work as an IT expert and became fascinated by the house. The termite mounds were crushed at the Durham Gold Mine by a local stamper battery and the material was turned into bricks.

The Sir William Wallace Masonic Lodge
Located on the corner of Haldane Street and Cumberland Street, this is a rare example of a corrugated iron Masonic Lodge. It was originally an iron clad church located in Croydon. It was subsequently moved to Georgetown. It is exposed corrugated iron inside.

Georgetown Peace Monument
Located in the park behind the TerrEstrial Centre, the Peace Monument is a collection of rocks each dedicated to a great peace activists. There are stones dedicated to Martin Luther King Jr., Mahatma Gandhi, Nelson Mandela, the Japanese Buddhist philosopher Dr Daisaku Ikeda, and locals including Julian Burnside and Eddie Kolki Mabo. The aim of the monument is stated as "This monument honours the courageous efforts of men and women who have devoted their lives to a peaceful and harmonious world. The people of the Shire of Etheridge acknowledge those known and unknown heroes of humanity throughout the ages. We also note the tremendous contributions of these champions of peace whose legacy will last for eternity ..."

Stamper Battery
Located in the park beside the Etheridge River, the five stamper battery is the remains of a gold battery which was erected, owned and operated by Jim, Jack and Tom Nugent (the Nugent Bros.) in 1937. Its useful life was short-lived. It was forced to cease operations in 1941 because of World War II.

Georgetown River Walk
The Georgetown River Walk is approximately 6 km long and passes along the banks of both the Etheridge River and Sandy Creek. There are signs along the route which include information about the history of Georgetown. In total there are thirteen gates along the walk. Maps and further information are available at the TerrEstrial Visitor Information Centre in Georgetown. For more information check out http://www.gulfsavannah.com.au/what-to-do/outback-heritage. It is an excellent opportunity to observe the diverse Georgetown Riverine tree species including red river gums, weeping paperbark, yellow wood, swampy mahogany, rain trees, sandpaper figs, lolly bush, batwing coral, inland bloodwood and corkwood wattle.

Cumberland Chimney
Located 20 km west of Georgetown on the road to Croydon is the Cumberland Chimney. It is all that is left of an old gold crushing plant which was built by Cornish miners. Nearby is an attractive lagoon which was built to collect water for the gold mine. It is a popular watering hole for birds from the surrounding area.
The sign at the site explains: "In its day, the Cumberland Mine was the largest and most successful of the gold mines in the Etheridge field ... it was a highly mechanised operation. Large steam-driven engines powered the batteries that crushed the gold-bearing stone as well as the tramway that carted it to the batteries. They also drove the winding gear that lifted the stone from 1,000 feet underground. The imposing brick chimney, built in 1899, dispersed smoke from the engines; the dam ensured a steady water supply.
"The township of Cumberland was large ... the miners' camp grew into an energetic and populous community that rivalled Georgetown. At the time of top gold production, almost 400 people lived there: mine workers with their families and about 100 other people.
"1885 saw a Police Station built and a Telegraph Office set up. Confidently, the Bank of New South Wales established its Cumberland branch in 1887. The settlement was proclaimed as a township in 1889. A school was opened in 1891 and four hotels were doing business in Cumberland in 1894.
"Gold production reached a peak of 11,500 ounces just before the mine was put on the London market in 1886, and fell rapidly after that. The days of high gold production from Cumberland were over. The expensive display of the workshop sheds, tram carts and steam engines with the great chimney smoking above them - later used to promote the purchasing company - looked  better on a prospectus than on a balance sheet. From 1887 on there was more gold to be dug from the shareholders than from the ground.
"By the end of 1890 there were only 169 residents in the township ... Floods washed away the dam and tailings dumps in 1893 and droughts hit in 1888 and 1889, but Cumberland carried on, introducing the cyaniding process of gold recovery in 1894.
"When the gold petered out and shareholders' funds dried up, Cumberland could not continue. By 1898 only one hotel was left in the township, and both the bank and the police were withdrawn. The Telegraph Office closed its doors in 1899, but the school carried on until 1915 when there was a 'drought of pupils'. Although the company abandoned the site in 1897, spasmodic attempts to use the battery continued until 1934."

O'Brien's Creek Gemfields
This important topaz field is 42 km north-west of Mount Surprise on an unsealed road. Ask at Mt Surprise Gems when hiring the equipment. They have mud maps and information on how to get to the gemfields. Check http://www.thegemden.com.au/fossicking.html. The website includes a three part video of how to fossick for gemstones at O'Brien's Creek. It can only be accessed by 4WD.

Cobbold Gorge
Located 92 km south of Georgetown is Cobbold Gorge (check http://www.cobboldgorge.com.au/about/the-gorge.html and watch the video).  It can only be visited by guided tour from Cobbold Gorge Village.
The sandstone gorge, claimed to be the youngest in Queensland, was created over the past 135 million years and modified significantly as recently as 10,000 years ago. The narrow ravines (some as narrow as two metres) have carved out deep gorges and permanent waterholes below towering cliffs which, in some places are 30 metres high. The gorge is known for its harmless freshwater crocodiles. There is a detailed account of the accommodation, tours and scenery of the area at http://www.cobboldgorge.com.au.

Agate Creek Gemfields
Located 95 km south of Forsayth and 120 km south of Georgetown, the Agate Creek Gemfields were established by the Department of Mines and Energy in 1995. There is detailed information on the http://www.thegemden.com.au/fossicking_information.html website which explains that the area is known for "Cryptocrystalline Quartz is the umbrella encompassing agate (silicon dioxide SiO2) which is a variety of chalcedony. Nodules or solid agates and geodes occur. Many of the geodes being filled with clear, smoky, amethyst or calcite crystals. Thunder eggs are also common in the rhyolite and may contain red brown jasper." It is accessible in a 2WD in the dry months but a 4WD is necessary if there has been heavy rain. There is a useful official guide which can be accessed at http://www.gulfsavannah.com.au/what-to-do/fossicking.

Savannahlander.
The Savannahlander train - a classic 1960s "silver bullet" rail motor - travels the original 90 year old rail line that serviced the pioneering mining towns of Forsayth, Einasleigh and Mount Surprise and offers four day tour packages to and from Cairns which include tours of Undara and Cobbold Gorge. Check out http://www.savannahlander.com.au/tour-home/savannahlander-tours/ for details.

* Prior to the arrival of Europeans the area was home to the Agwamin Aboriginal people.

* Georgetown came into existence when alluvial gold was found on the Etheridge goldfields in 1869.

* The town came into existence in 1870. A telegraph repeating station was built in the town that year.

* The town was named Etheridge but this was changed in 1871 to Georgetown. By this time the town had a population of 600.

* Mining in the area flourished in the 1880s and the population of the town reached 3,000.

* In 1888-1889 the town was surveyed and divided into residential allotments.

* The Ant Bed house, an adobe house built out of crushed termite mounds, was completed in 1889.

* In 1889 the Mundic Miner became the town's newspaper.

* By the 1900s gold mining was on the wane and the town became the administrative centre for the Etheridge Shire.

* In 1908 the Shire Hall was built. That same year a railway opened to carry ore to Chillagoe.

* The Roman Catholic Church was consecrated in 1913.

* The TerrEstrial Centre was opened in 2003.

* In 2004 the local Agwamin people surrendered native title in exchange for access to traditional lands and housing in Georgetown.

There is a useful local website - check out http://www.etheridge.qld.gov.au/georgetown. There is also the downloadable Gulf Savannah brochure at http://www.gulfsavannah.com.au/wp-content/uploads/2013/04/gsvisguide.pdf. This will become out of date when they update the 2013 brochure. 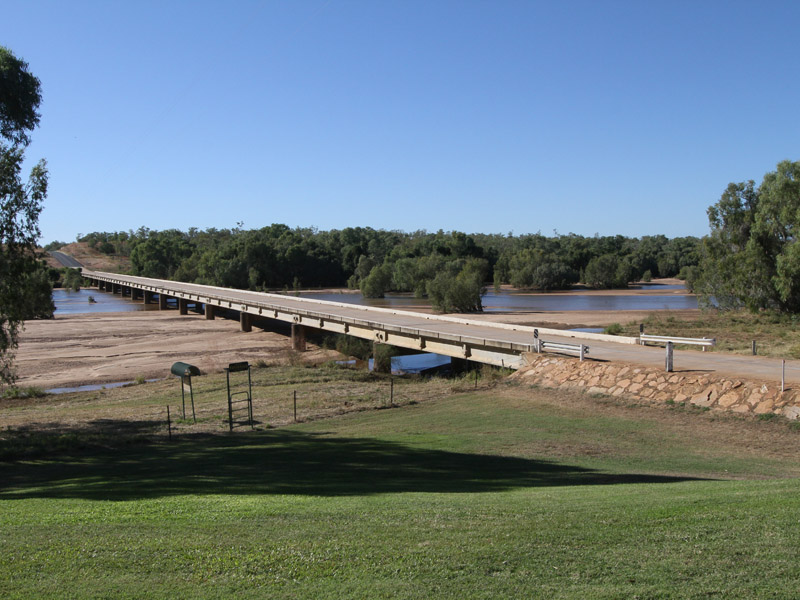 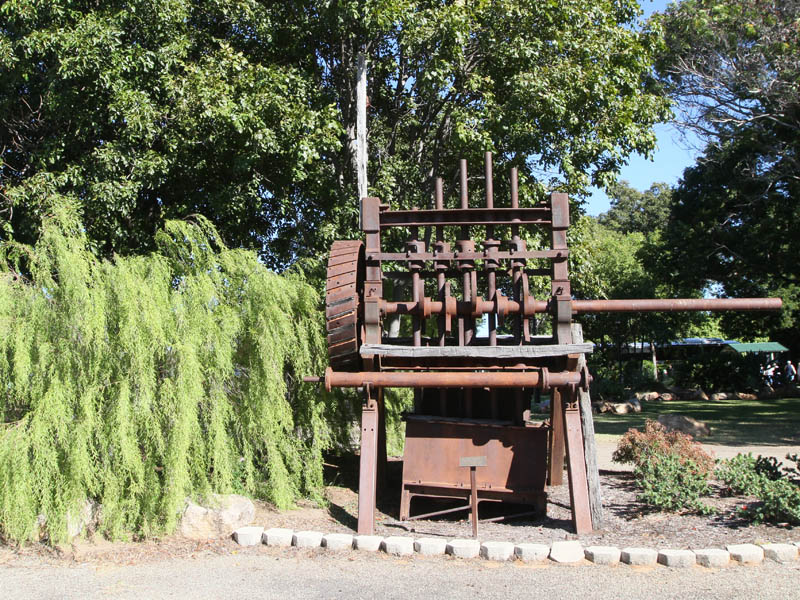 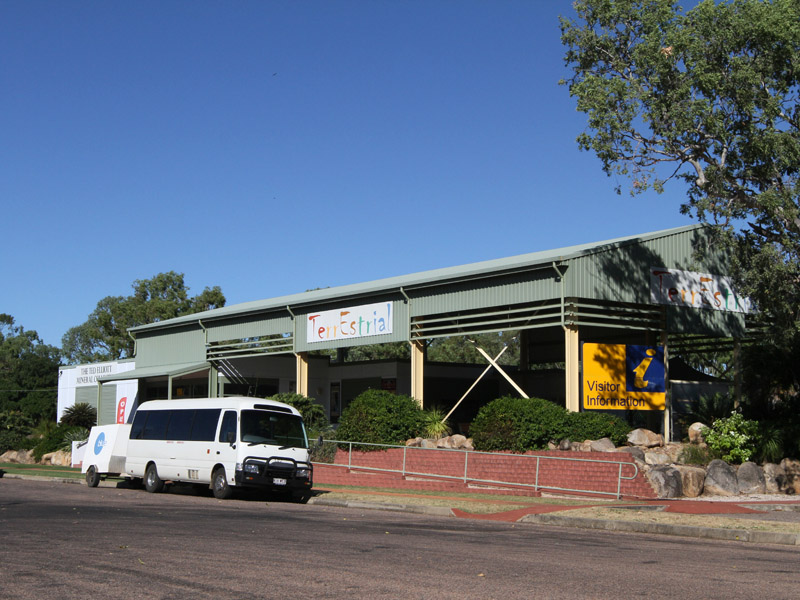 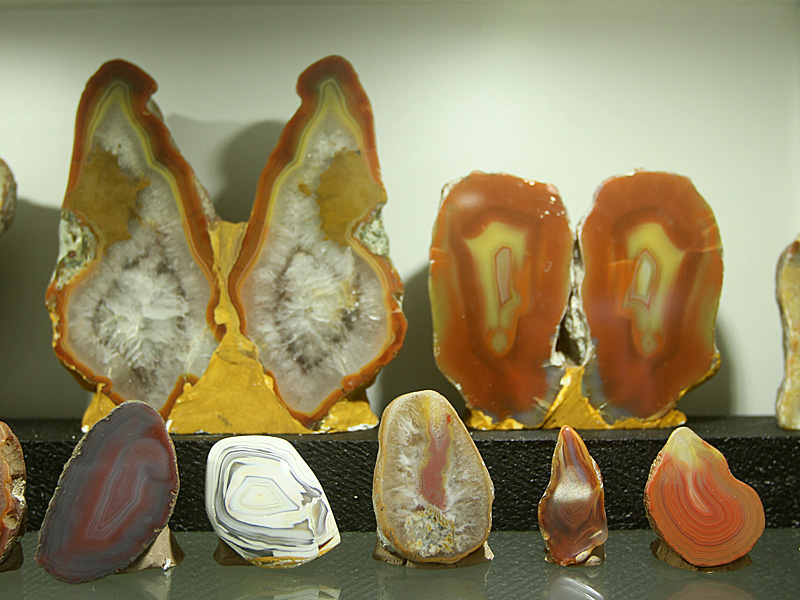 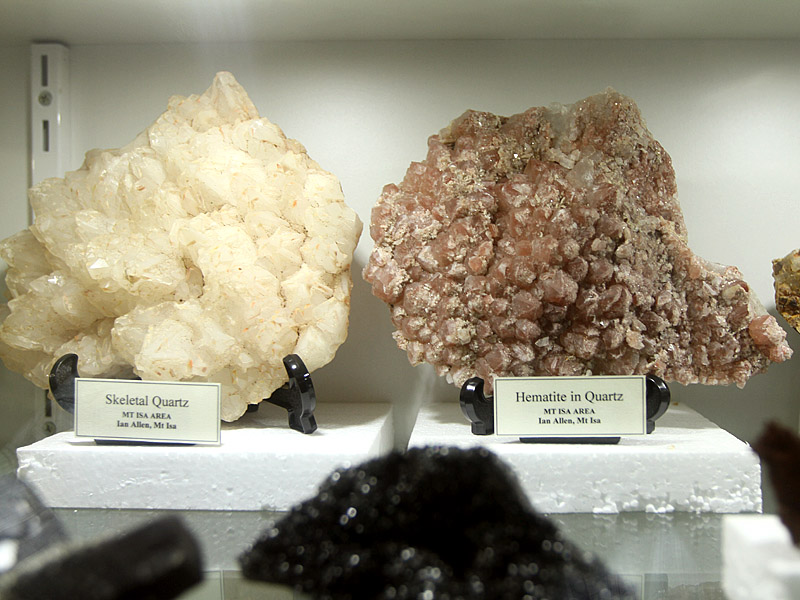 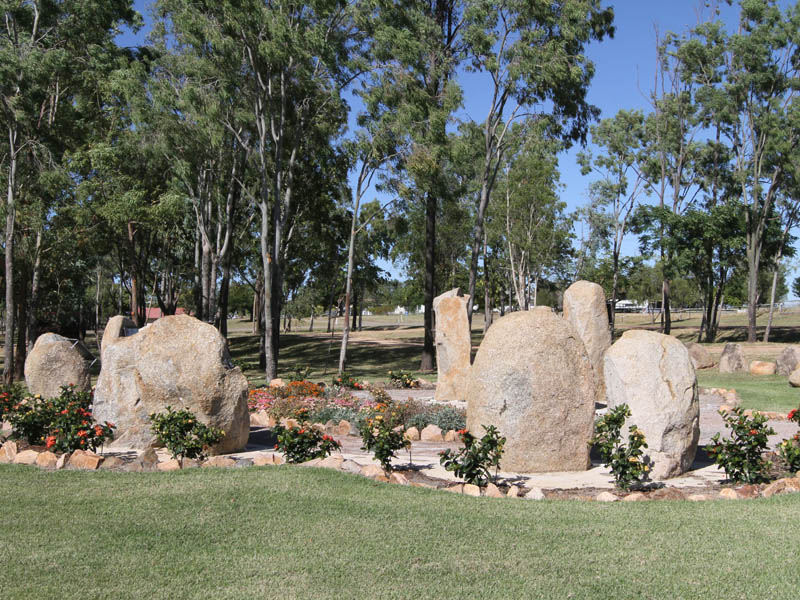 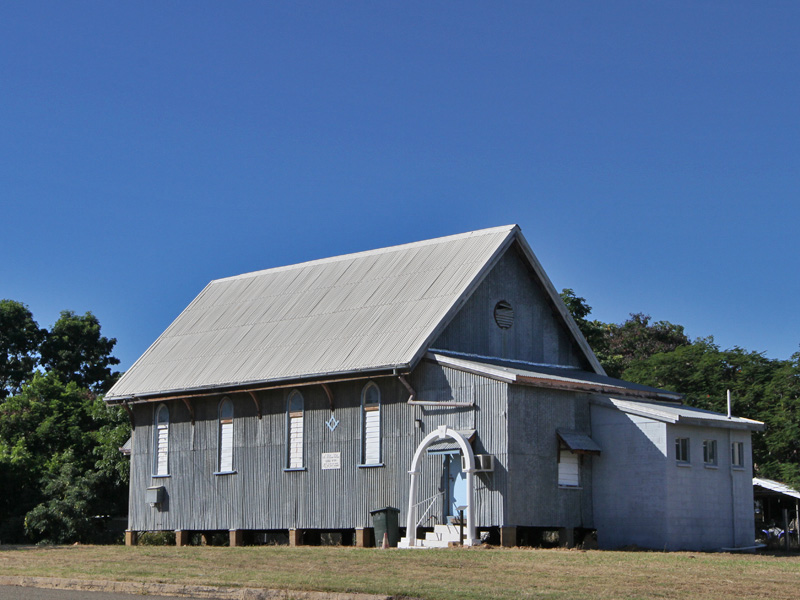 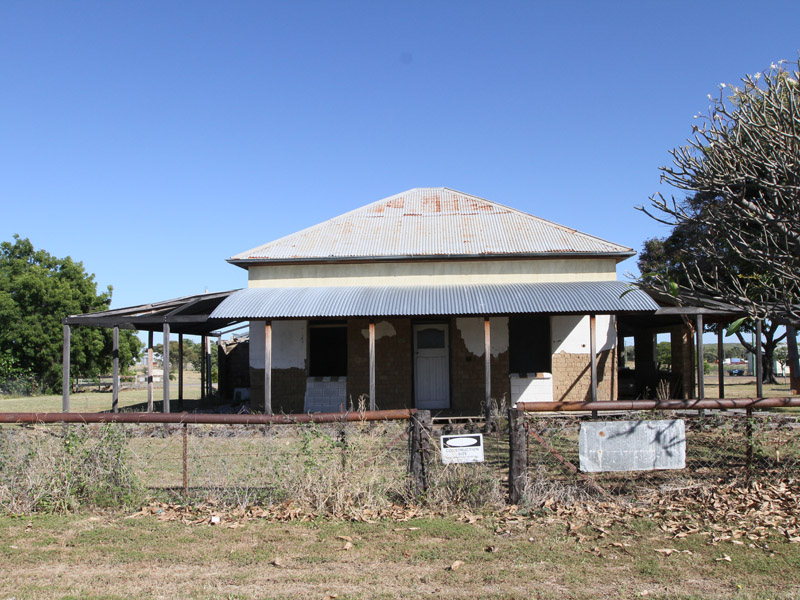 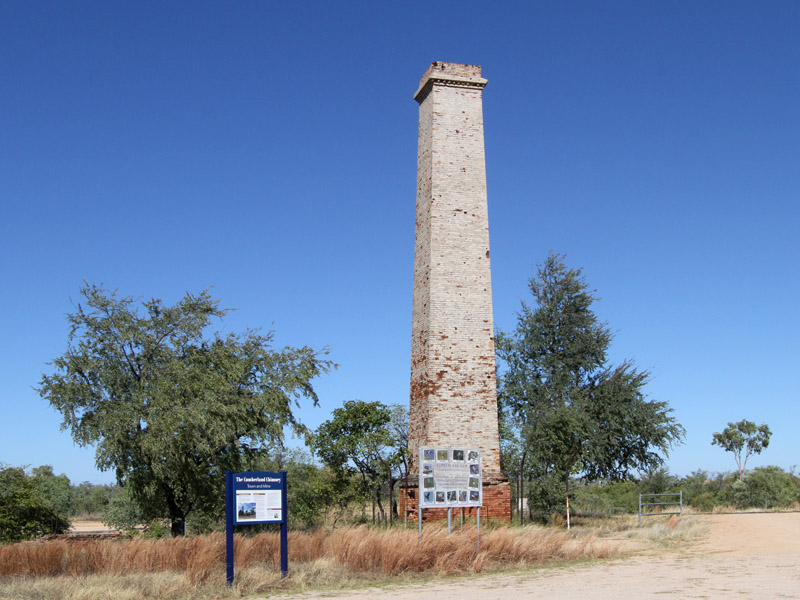 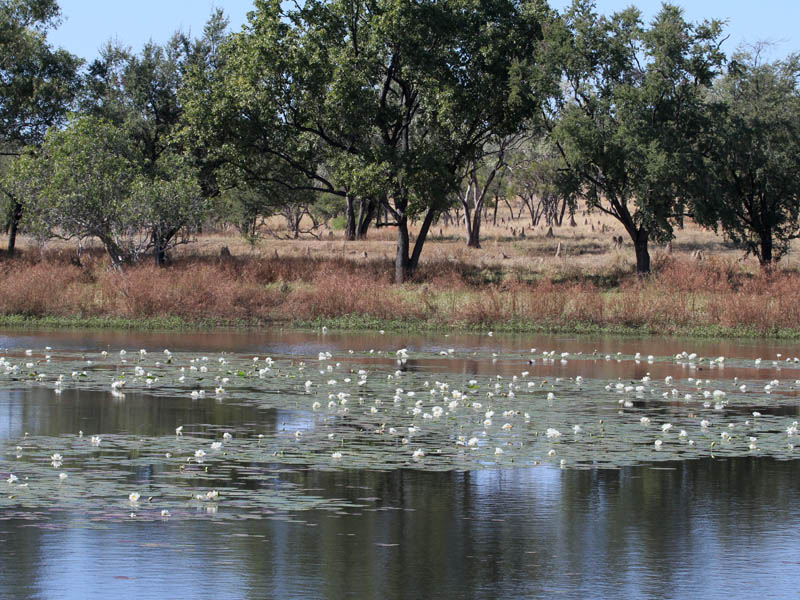 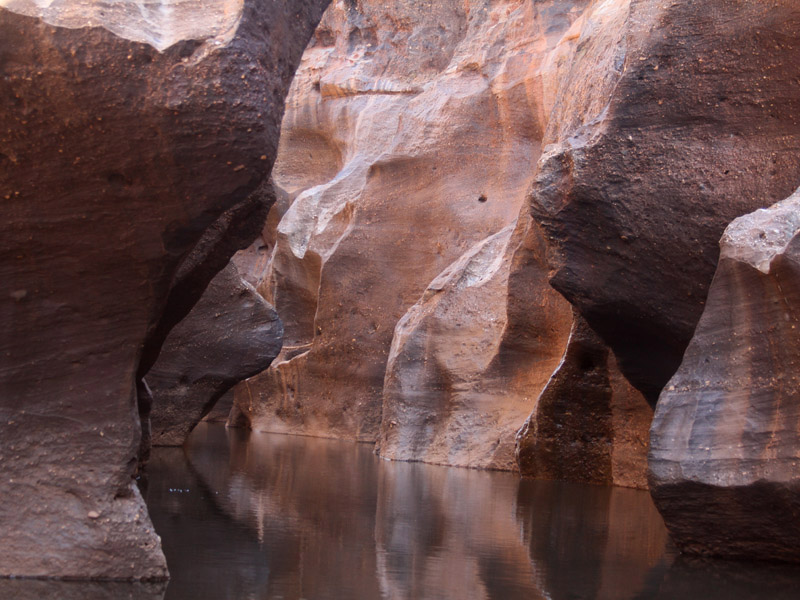 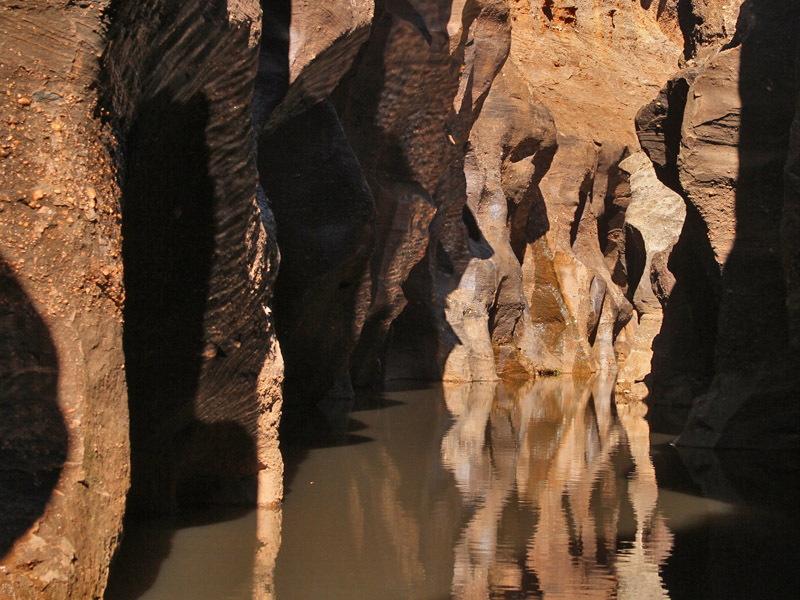 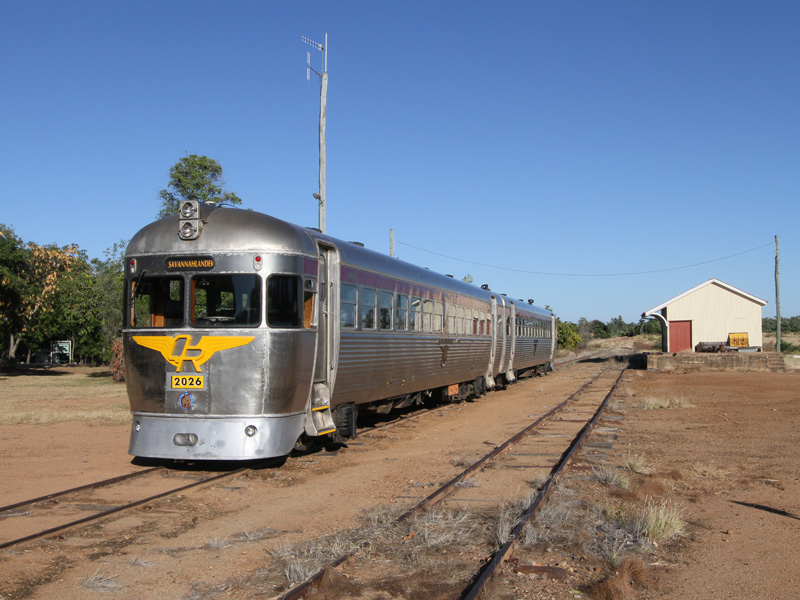