Gerringong was a rural dairying village but since the 1980s it has become increasingly a holiday and tourist destination. Today many locals commute to the Greater Wollongong area which lies to the north, just beyond Kiama. The inevitability of the appeal of the ocean has ensured that, in the last thirty years, the town has transformed from a sleepy seaside village into a rapidly growing suburban town overlooking both the ocean and the rich and fertile hinterland. The Princes Highway from the north winds around 'The Bends' and offers dramatic and beautiful views of the rock platforms between Kiama and Gerringong and the vast Pacific Ocean which stretches to the horizon. This is the southernmost point where the Illawarra escarpment tumbles to the sea and consequently the rain-filled clouds blown from the south regularly bump into Saddleback Mountain producing high rainfall and rich, grassy paddocks ideal for cattle. Today Gerringong is a holiday and commuter destination known for its quiet beach and relaxed ambience.

Gerringong is located 129 km south of Sydney via the Princes Highway. The town is 50 m above sea level.

It is generally accepted that the word 'gerringong' is derived from a Tharawal Aboriginal word meaning "a fearful place" or "a place of peril".

Werri Beach
Werri Beach is the town's main surfing beach. It is an irony that a large sand dune has managed to deprive most of the houses of ocean views and consequently the beach, apart from the southern end where there is a car park, is usually quiet and isolated. At the northern end there is the start of the Kiama Coast Walk and for the rest of the beach - once you have traversed the huge dune you can be on a beach which seems far removed from civilisation. It is recognised as a good surfing beach and beach anglers will find there are snapper and whiting in the shallows.

Gerringong Heritage Museum
Located at 10 Blackwood Street, the Gerringong Heritage Museum is open from 1.00 pm - 4.00 pm  on Saturdays and Sundays. The displays deal with early transport, the geology and fauna of the area, the hand tools of the pioneers, dairy farming and Charles Kingsford Smith's famous flight across the Tasman which started at Seven Mile Beach, Gerroa. There are also records of historical land grants, places of interest and cemetery data, as well as some family histories and photographs. For more information check out http://kiama.com.au/gerringong/gerringong-heritage-museum or tel: (02) 4234 1127.

The Town's Historic Buildings
There is a free brochure available at the Kiama Visitor Centre titled Heritage Walks of Kiama and District which has a map and of Gerringong and lists 14 places of historic interest in the town. Of particular interest are:

1. Renfrew Park
The very prominent house on the ocean side of the Princes Highway as it descends from Saddleback Mountain to the town is the homestead of 'Renfrew Park' estate. It was erected in 1862 on the site where a wooden slab house had been built (c.1845). If the house looks rather modern it is because it was remodelled in 1932 with brickwork replacing the wooden veranda. The original owner was Robert Miller who settled here in 1837 after migrating from Renfrewshire in Scotland - hence the estate's name. It is a private home.

2. Hindmarsh Alne Bank
Off the new bypass west of the town there is a sign to the right to the 'Alne Bank' homestead (c.1851) which is located at 61 Alne Bank Lane and is one of the most interesting and impressive historic buildings in the district. It was built of rubble stone by Michael Hindmarsh (1800-1867) who settled in Gerringong in 1836 becoming the first permanent resident in the district. The building has sash windows, cedar joinery, a notable front door with fanlight, plus a stone barn and iron lacework, both added later in the nineteenth century. For more information check out http://www.hindmarshalnebank.com.au which provides a detailed history of the house and its residents.

4. Gerringong Uniting Church
Located on Fern Street (the main street of town), just beyond Sandy Wha Road, is the old Congregational Church, now the Uniting Church. Services started in a timber building in 1861. The present stone structure - white with stained-glass windows - dates from 1884.

5. Methodist Church
Over the road from the Congregational Church, in Bridges Road, is the old Methodist Church. The original church was a slab building constructed in 1852. The present building, characterised by plain stone of restrained blue and with attractive wooden window trimmings, was constructed in 1870. At the same time the twin pines were planted.

6. Willow Bank Homestead
On Bridges Road opposite the Methodist Church is 'Willow Bank' homestead which was built in the early 1860s. Over the years it has been modified but it is well maintained and, although not open to the public, the view from the street reveals it to be one of the most beautiful properties in town and a reminder of South Coast elegance before the arrival of the modern home.

7. Police Station
Located at 89 Fern Street, the town's early police station which was built in 1883 of stone and lime mortar with walls that were 56 cm thick and ceilings almost twelve feet (3.7 m) high, is now privately owned. The cells are still the back of the building.

9. Anglican Church
The historic Church of England, now the Anglican Church (1874), is located at 103 Fern Street. It was designed free of charge by the famous church architect, Edmund Blacket. The original slab building which had been built in 1855 at a cost of £200, was burned down in 1872.

11. Boat Harbour Store
Just beyond the town centre, at the corner of Fern and Jupiter street is the historic Boat Harbour Store (c.1856) which is probably the oldest building in the town. It still has an unusual exterior chimney. The original owner was a Mr Fuller who married Robert Miller's youngest daughter. For many years it was the home of a Miss Mathle. It is privately owned.

12. St Mary's of the Sea Church
Above the Boat Harbour Store on Fern Street is St Mary's of the Sea Catholic Church which dates from 1882 although it replaced a wooden slab church which had been built in 1864 and was used as a school for many years. The present stone building is small and intimate, with an attractive wooden interior and elaborate stained-glass windows.

13. Boat Harbour and Harbour Jetty
The story of the New South Wales South Coast is the story of harbours and ports. Until the 1940s the ocean was the region's primary transportation route and consequently the Gerringong Boat Harbour is important historically. It can be accessed by turning east into Jupiter Street after the shopping centre. The first Europeans to use the sheltered port were cedar cutters who shipped their timber out as early as the 1840s. At the time boats anchored offshore and a punt would row to the ramp where it would load and unload produce. A white flag would be tied to a pole near the ramp to alert passing boats that there were loads to be collected.
In 1880 the government provided money for the construction of a 200-foot (61 m) jetty. Unfortunately this was a serious miscalculation and boats could only load and unload at high tide. Two years later, with a further grant, the jetty was extended to 400 foot (122 m) but a rare cyclone destroyed the entire structure a few years later What remained of the jetty fell into disrepair and it was eventually demolished.
Today the Boat Harbour is used for recreation. There is a boat ramp, a small park and the fishing is good with boats returning having caught tuna, kingfish, mulloway, snapper, flathead, morwong and even marlin in the offshore waters. There is a memorial crafted out of two anchors which reads: "These anchors were raised from this harbour in 1971 by the Rotary Club of Berry. The larger was attached to the mooring chains laid in 1863. They are a memorial to the ships that called, the men that sailed them and our pioneers of that time, 1810-1895. There is a painting of the harbour with the jetty in the Gerringong Town Hall.

Mount Pleasant Lookout
Driving from Sydney on the Princes Highway the road bypasses Kiama and enters 'The Bends' which wind around Saddleback Mountain. Just before it drops down to Gerringong there is a turnoff to the Mt Pleasant Lookout which offers excellent views over the town, the beach and the gently undulating landscape of coast and pastoral hinterland rolls towards Nowra.

Kiama Coast Walk
There is a 22 km walking trail from Gerringong to the Minnamurra River north of Kiama. It is the kind of walk which can be experienced in small, bite-sized chunks or taken as a full day stroll along the coast. There is an excellent, detailed brochure - Kiama Coast Walk - available at the Kiama Visitors Centre which breaks the walk into three distinct sectors from Gerringong:

(a) Gerringong to Loves Bay - 6km - medium - 2 hours - is the most dramatic and beautiful section of the walk as it passes around the cliffs, with Saddleback Mountain rising to the west, on a quiet and peaceful stretch of the coastline. In season the walk is an ideal vantage point for whale spotting as they make their way up or down the coast.

(b) Loves Bay to Blowhole Point - 5km - medium - 1.5 hours - is a walk through southern suburban Kiama along the coastline. There are plenty of views from the headlands and pleasant walks past Surf, Kendalls Beach and Easts Beach.

Saddleback Mountain Lookout
One of the great views on the South Coast is that from Saddleback Mountain. To the north the visitor can see Lake Illawarra, Port Kembla and Wollongong. To the south is Gerringong, Seven Mile Beach, Coolangatta Mountain and Shoalhaven Heads. From Gerringong the visitor should head towards Kiama. The reserve at the lookout is modest but the mountain, which is the point where the escarpment tumbles down to the sea, offers one of the best views on the whole of the south coast.

* Prior to the arrival of Europeans the Wodi Wodi Aborigines who spoke the Tharawal language had lived in the area for tens of thousands of years.

* In 1770 Captain James Cook sailed along the coast but made no observations specifically about the Gerringong area.

* In December 1797 the explorer George Bass, during his journey down the South Coast in Governor Hunter's whaleboat, became the first European to sail close to Gerringong.

* Cedar cutters were drawn to the area in the 1840s, as they cut down the local forests, Gerringong Harbour became an important place for loading the timber onto ships bound for Sydney.

* The area around Gerringong was surveyed in 1826.

* 1857 saw the opening of a post office and the town's first hotel. At the time it was rather unromantically known as Smith's Swamp.

* In July, 1872 a grass fire which had started at Willow Vale burnt out most of the town's commercial district.

* The railway reached Gerringong in 1893.

* In 1912 Gerringong won the first season of the South Coast Rugby League competition. Since then it has become famous for producing star rugby league players, notably Rod Wishart and Michael Cronin. The local oval has been named in Cronin's honour.

* In 2015 a major bypass around the town was officially opened.

Kiama Tourism's site has information about Gerringong. Check out http://www.kiama.com.au. There is a local website which is worth checking out: http://www.gerringong-gerroa.com/what-to-do.htm. 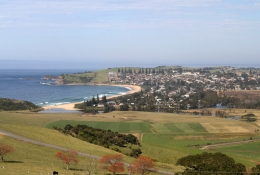 The view south of Gerringong from Mount Pleasant Lookout. 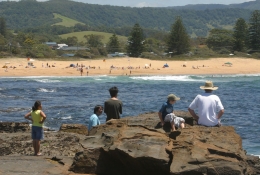 The view across Werri Beach from the rock platform at the southern end. 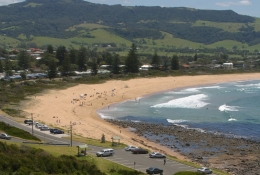 Werri Beach from the southern headland. 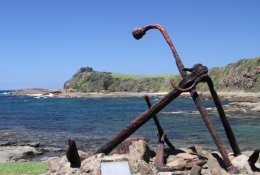 Anchors at the Boat Harbour - a memorial to the ships wrecked off the coast. 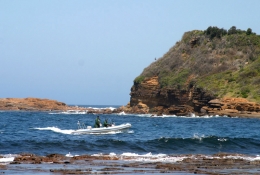 Fishermen running the narrow channel between the rocks at Boat Harbour. 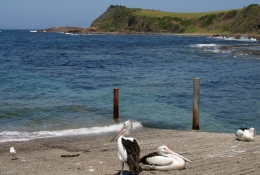 Pelicans and seagulls at the boat ramp at Gerringong's Boat Harbour. 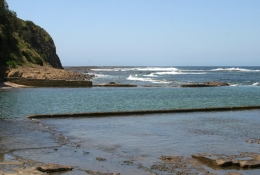 The rock pool at Boat Harbour.