Gerroa is located on the south side of the hill above the Crooked River. As such it is particularly vulnerable to the southerlies which blow off the Tasman Sea. Fifty years ago it was a sleepy destination with large areas of land owned by a variety of churches. It was a popular summer holiday destination for the Christian Brothers and their facilities often hosted religious retreats. By the 1980s the cheap holiday homes along the headland were giving way to homes built by retirees and holidaymakers and people wanting a seachange and prepared to commute to Nowra and Wollongong. Although still a town with minimum facilities - it only has one cafe/restaurant - it has become a popular retreat for people looking for a quiet holiday with uninterrupted southerly views over a vast beach edged by a National Park.

Gerroa is located 133 km south of Sydney via the Princes Highway and the coast road from Gerringong.

Interestingly there seems to be no evidence to suggest the origin of 'gerroa' although the Sydney Mail in 1936 claimed the word meant "meeting place of birds". This is not supported by other sources. However it could be correct.

Seven Mile Beach National Park
Seven Mile Beach National Park is a narrow strip of coastal land between the long, hard beach which stretches from Crooked River in the north to Shoalhaven Heads in the south. The National Park is no more than 1.2 km across at its widest and is bordered by swampland to the west. The National Park is home to diverse native flora including spinifex, coast wattle, tea-tree, coastal banksia, she-oaks, bangalay, saw banksia, southern mahogany and burrawangs. It is also ideal for birdwatching with the vegetation being home to honeyeaters, currawongs, crimson rosellas, thornbills, kookaburras, ravens, grey fantails, eastern whipbirds and white-throated tree creepers. It is also possible to see the occasional white-breasted sea eagle.

Seven Mile Beach is a popular fishing beach with good catches of whiting in the summer months as well as flathead, mulloway, salmon, bream and tailor.

If you enjoy walking along a seemingly endless beach then you can walk the seven miles (actually it is probably closer to eight miles - 13 km) from Gerroa to Shoalhaven Heads. The walk is easy and there is a popular Sand Track Walk behind the beach. For more information check out http://www.nationalparks.nsw.gov.au/seven-mile-beach-national-park.

Kingsford Smith Memorial Park
On 11 January, 1933 the first commercial flight from Australia to New Zealand took off from Seven Mile Beach. The flight took 14 hours and 10 minutes. It left Seven Mile Beach at 2.50 am after flying from Sydney in the afternoon.

The local paper, the Kiama Independent, recorded the event in its edition of 14 January, 1933: “The largest number of people ever seen on Seven Mile Beach, Gerringong, estimated at well over a thousand, were there on Tuesday, to see the world-famous Southern Cross land in the afternoon and then make her departure in the early hours of Wednesday morning with Air Commodore Sir Charles Kingsford Smith at the controls. A perfect take-off was made shortly before 3.00 am, and amid cheers and good wishes, the flight to New Zealand was commenced.

“Those who made the trip to the beach on Tuesday gained some insight into the vast amount of work entailed in preparations for one of these big flights. Weeks of organization culminate in scenes of concentrated activity at the end.”

The historic journey from Seven Mile Beach to New Plymouth, New Zealand is commemorated in the small park at the top of the hill (it is on the corner of Headlands Drive and Crooked River Road) where there is a memorial to Sir Charles Kingsford Smith and a lookout which offers panoramic views over Seven Mile Beach. The memorial consists of a plaque with a copy of the Kiama Independent article, a small pillar with a plaque established by the Gerringong RSL and a flat, two-dimensional concrete rendering of Kingsford Smith's aeroplane, the Southern Cross which is 3/4 the size of the plane. Be amazed at how small it is.

Crooked River Estuary
Although Seven Mile Beach is popular with surfers (it is regularly used by backpackers wanting to learn to surf) and wind surfers, it is primarily a destination for families particularly at the mouth of Crooked River. It combines the calm waters of the tidal river with a flat stretch of beach and is safe for swimming and playing in shallow water. Anglers recognise the mouth of the river as being a good place to fish for prawns, bream and flathead. There are picnic areas with swings, toilets and barbecues along the river bank and there is good access to Seven Mile Beach over the new bridge across the river.

Black Head Fossils and Rock Fishing
Black Head is located at the eastern end of Stafford Street. There is a car park and rough paths leading to the rock platform. Given that it has been a popular fossil site for school and university excursions for more than half a century it is remarkable that there are any fossils left. Not surprisingly, breaking or removing fossils is strictly forbidden. Today it is still one of the best displays of fossils on the New South Wales coast with fossils dating from 250-300 million years ago. There are plenty of examples of tree fossils and, if you look carefully, you will see small sea creatures. The excellent Geocaching website (http://www.geocaching.com/geocache/GC21VQR_fossilised-gerroa?guid=2982833e-08d7-4658-8a1e-0fcd5847f8ec) explains: "The most common marine animals of the Permian Era are the brachiopods, a group of hinged-shelled invertebrates. The brachiopod, Martiniopsis, is very common. Bivalve molluscs such as clams, mussels and oysters were also common; one example is Myonia. There are also fossils of gastropods (snails) such as Keeneia, echinoderms represented by crinoids (sea lilies), and more rarely starfish. Bryozoans or moss animals (sea ferns and sea mats) are sometimes very abundant as fossils with the two common types, being fenestellids and Stenopora. Corals are not too common but a solitary rugose coral (cone coral) Euryphyllum is well known." The rock platform is also popular with rock anglers who catch tuna, kingfish, snapper, drummer, trevally, salmon, tailor and groper.

* Prior to the arrival of Europeans the Wodi Wodi Aborigines who spoke the Tharawal language had lived in the area for tens of thousands of years.

* The first Europeans to traverse the area were the survivors of the wreck of the Sydney Cove who, in 1797, made their way up the coast to Sydney. Only three of an initial seventeen survived the walk.

* In December 1797 the explorer George Bass, during his journey down the South Coast in Governor Hunter's whaleboat, became the first European to sail along Seven Mile Beach and cross the shoals at the river entrance which he named the Shoalhaven.

* By the 1810s cedar cutters had moved into the area and were exploiting the rich timber in the hinterland.

* In 1824 the land where Gerroa now sits was surveyed by James McBrien under instructions from Governor Brisbane.

* By the 1860s the flatness and hardness of the beach led to it becoming a popular venue for horse racing.

* In 1894 small deposits of gold were discovered on the beach but this was not enough to prompt a goldrush.

* In 1929 Seven Mile Beach became the setting for the first car in Australia to travel over 100 m.p.h. It was raced by Norman Smith, nicknamed "Wizard Smith".

* In 1933 Seven Mile Beach was used by Sir Charles Kingsford Smith as the runway for the first commercial flight between Australia and New Zealand. The journey in the Southern Cross from Gerroa to New Plymouth in New Zealand took 14 hours and ten minutes. It started at 2.50 am. Flares were used to light the beach and mark out the runway. Several thousand people came from the local area and as far away as Sydney. Car headlights were also used to provide extra illumination.

* In 1957 the Jesuits built a retreat at Gerroa. A number of other Christian organisations followed.

There is a useful local website. Check out http://www.gerringong-gerroa.com. 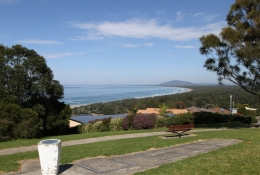 The view from the Kingsford Smith lookout across Seven Mile Beach. 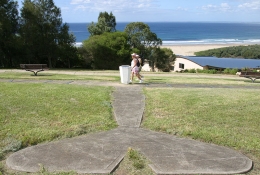 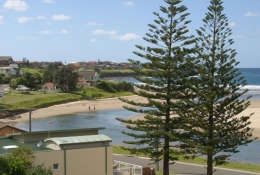 The mouth of the Crooked River at Gerroa 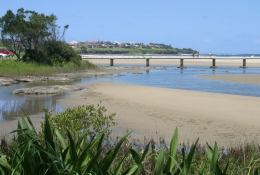 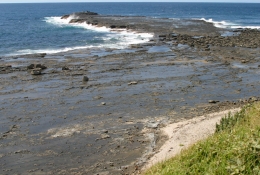 Black Head, an important fossil site, on the headland beyond Gerroa. 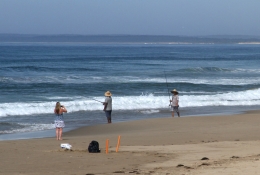 Fishing for whiting and bream on Seven Mile Beach. 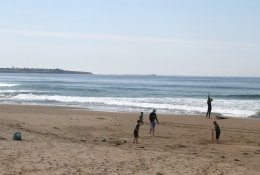