Gingin is proud of the claim that it is one of the oldest rural towns in Western Australia. Today it is a small and quaint township notable for the tree-lined Gingin Brook which runs through the heart of the settlement and is edged by parks and walks. The district is known for its beef cattle, sheep grazing, apiaries, irrigated horticulture, viticulture, olive groves, aquaculture, piggeries, poultry farms, wineries, abattoirs, feedlots, and crayfishing on the coast.

Gingin is located 83 km north of Perth via National Highway 1.

The Gingin area was first explored by George Fletcher Moore in 1836. Moore used the Aboriginal name "Jinjin" on his maps. When W L Brockman took up land in the area in 1843 he named his property "Gingin Station". No one is sure what Gingin means but the popular interpretations are either "footprint" or "place of many streams".

Gingin Walkabout Trail
The Gingin Walkabout Trail is a pleasant 45 minute wander around the town which starts at the local Post Office. There is a useful large map of the town in the park. It lists the main historic attractions - they are all either on Brockman Street, Weld Street, Jones Street or around Gingin Brook.

H1 - Post Office (1886)
H2 - Philbey's Cottage (1903) - a charming gabled cottage made from casuarina rock. Philbey was the Town Clerk of the Gingin Municipality.
H3 - Railway Station and Markets - see https://www.facebook.com/600JonesSt and https://www.gingin.net/gingin-railway-station.
H4 - St Luke's Anglican Church (1861) - an attractive Gothic Revival church made out of local casuarina rock with a shingle roof.
H5 - Uniting Church (1870) which was the local Wesleyan Church - it is built from bricks which were dug and fired in the village.
H6 - Jim Gordon VC Trail - a pleasant wander along the Gingin Brook
H7 - Granville was built as a home in the 1860s and converted into a hotel in 1871. The sign outside the house explains "The original Granville was built in the early 1860s by Thomas J. Jones and his wife Eliza. They obtained a licence to sell liquor here in 1871 and soon after this the southern wing of four large rooms was added. After the death of T.J. Jones in 1885 his son J.V.A. Jones and wife Emma carried on the hotel business. The hotel licence was allowed to lapse in 1929 when J.V.A. Jones died, but members of the Jones family continued to manage the Granville as a boarding house until it was sold in 1952. The Granville was purchased by the Gingin Shire in 1975." There is more information at http://inherit.stateheritage.wa.gov.au/Public/Inventory/Details/a1c2b82b-de98-4682-9e45-6b209a743523.
H8 - Cemetery

Gingin Waterwheel
Located in Gingin Park on Weld Street, the Gingin Waterwheel is, as the sign explains, "a replica of one used to drive Chesiton Flour Mill. The mill was established in 1855 and was situated 2 km further upstream on this brook on Swan Location 101. The axle is the original one from the mill and the wheel was remade by Mr Frank Butler of Gingin for the Gingin Shire Council in 1978. The pump being driven by the water wheel was designed and installed by Mr Neil Butcher of Beermullah in 1984. This pump operates the fountain in the centre of the Granville pool."

Dewar's House
Dewar's House is located at 15 Weld Street. This National Trust-listed building was built of Flemish bond bricks. It is a good example of an early large dwelling in rural Western Australia. Detached from the house is the original Gingin Store which was, for most of the surrounding settlers, the centre of the tiny township. The Heritage Council notes: "Railway Hotel (fmr) Dewar's House, a single-storied brick and shingle cottage (facing Weld Street) with a two-storey addition on the north side (facing Edwards Street) and a stone walled barn in the rear yard, is significant for its aesthetic values, form and the colour and texture of its fabric. The landmark qualities arising from the elevated position overlooking the town." For more information check out http://inherit.stateheritage.wa.gov.au/Public/Inventory/Details/dce173bd-3361-4731-893c-2b08882d5fda.

Gravity Discovery Centre and Observatory
Located 25 km west of Gingin at 1098 Military Road, Yeal, the Gravity Discovery Centre and Observatory is open from 10.00 am - 4.00 pm Tuesday, Wednesday, Thursday and Sunday with the Observatory session starting at 10.00 am on Friday and Saturday. The Observatory is open from 7.30 pm - 9.30 pm on Friday and Saturday with the session times subject to change. Check at https://gravitycentre.space/admission-and-opening-hours or tel: (08) 9575 7577. Both the Discovery Centre and the Observatory offer a range of genuinely fascinating experiences which are described in great detail on their very detailed website. Check out https://gravitycentre.space and note particularly:
* Day Tours - "Discover the world through science on a guided tour of the Gravity Discovery Centre! Our science guides will take you on a journey through time and explain some of our universe’s most mysterious phenomena! You’ll also get to explore our observatory and look at the Sun through a solar scope (as long as the sky stays clear!)."
* Abseil the Leaning Tower - "Abseil the Leaning Tower of Gingin! 45 metres of exhilarating, heart pumping fun! Each participant will be able to abseil the tower three times."
* Explore the Cosmology Gallery - with its Timeline of the Universe, Niobium Bar (a gravitational wave detector) and its Penrose Floor.
* Leaning Tower of Gingin - "An awesome feat of engineering. The Tower is an impressive 45 metre tall steel structure, leaning at an angle of 15 degrees and held in place by 180 tons of concrete." It can be climbed for both the view and to carry out Galileo's experiment.
* Biodiversity Gallery - "In our Biodiversity Gallery, you can get up close and personal with some of our local flora and fauna. The SW region of WA is regarded as one of the world’s biodiversity “hotspots”. Local bushland surrounding the centre is inhabited by rare, wonderful and endangered species of plants and animals. The gallery aims to celebrate the rich diversity of plant and animal species in the area."
* Solar System Walk - "The Solar System Walk is an enjoyable and educational 1 km scale model of our Solar System. The walk begins at the Sun and disappears along a track through native bush. Alongside the track, model planets and their moons are located at the correct scaled distances from the Sun. Information plaques are located at each planet."

* Prior to the arrival of Europeans the area was home to Yuat Aboriginal people.

* The first Europeans in the Gingin area were Robert Dale and Edward Barrett-Lennard in 1830. They were searching for lost cattle.

* The district was explored by George Fletcher Moore in 1836.

* In 1839 Granville was established as a townsite.

* In the early 1850s a police station and resting place for horses was established on Gingin Brook.

* A telegraph line was established from Gingin to Perth in 1886.

* The Gingin Railway station was completed and opened in 1891.

* In 2003 a Gravity Discovery Centre was built near Gingin.

* In 2006 a Zadko telescope was constructed at the Gravitational Observatory near the town. 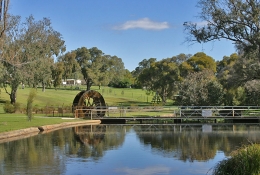 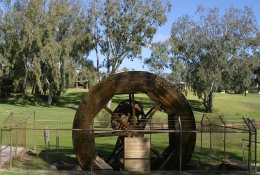 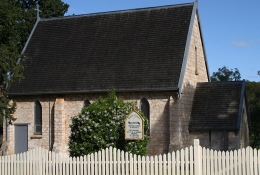 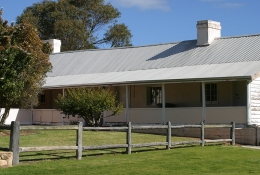 Granville House became a hotel in 1871.