Wheatbelt town at the southern edge of the Flinders Ranges

Gladstone is a small rural service town in an area dominated by wheat and sheep. Historically it was an important rail centre with a handsome local gaol. The district around the town is noted for its sheep and wheat and even today it is known to have the largest grain silos in South Australia - reputedly the largest grain receival site in inland Australia. The appeal of the town lies in its broad streets and substantial buildings. The buildings include the Commercial Hotel which dates from 1878 and has some particularly attractive lattice work, the Gladstone Hotel and the bank buildings which dominate the street beside the railway line.

Gladstone is located 203 km north of Adelaide at the southern end of the Flinders Ranges.

In 1871 the town was formally surveyed and named Gladstone after the British Prime Minister William Gladstone. At the time there was a tiny settlement on the nearby Booyoolie Run. This resulted in two names - Booyoolie and Gladstone - being applied to the settlements until the 1940s when Gladstone became the name applied to both of them.

The Gladstone Gaol
The town's main attraction is the Heritage listed Gladstone Gaol, located in Park Terrace at the northern end of town and accessed from Ward Street. It was built between 1879-81 at a cost of £21,640. The slate was quarried at Mintaro and transported by bullock dray. The gaol was originally used for 'inebriates and debtors'. From the time of its opening until the 1920s it never housed more than 20 prisoners. From its earliest days it was always a gaol for both men and women. During World War II it was used as an internment camp for Italians and Germans. After 1943 it remained unused until 1953 when it became a corrective training complex for 18-25-year-old offenders. It was reasonably secure. There were only 26 escapes in the gaol's 100 year history. The gaol was eventually closed down in 1975 and opened to visitors in 1978. It is open for inspection and it is possible to spend the night in the cells - if you bring your own bedding. The gaol is open for inspection from 10.00 am - 4.00 pm seven days a week. Tel: (08) 8662 2579 and 0484 084 692.

National Australia Bank
Located at 42 Gladstone Street, the National Australia Bank is recorded in the South Australia Heritage Register with the following assessment: "The building is significant as an excellent example of an early twentieth century bank building in rural South Australia, particularly notable for the Neo-Classical facade. The National Bank commenced business in Gladstone in 1892 with a staff of two, from a building located next to the Booyoolee Hotel. The site was prone to flooding, and the bank moved to the Gladstone Terrace site in 1937. The Gladstone branch was particularly significant in the region, serving many areas after the closure of the Laura, Georgetown and Caltowie branches around the turn of the century." For more details check out https://web.archive.org/web/20160301094337/http://apps.planning.sa.gov.au/HeritageSearch/HeritageItem.aspx?p_heritageno=16383.

Savings Bank of South Australia
Located at 44 Gladstone Terrace, the Savings Bank of SA Building is recorded in the South Australia Heritage Register as being "significant as a fine example of an early-mid twentieth century Art-Deco bank building comparable with urban examples of the period. Designed by architects TRV Lloyd & Philip R Claridge, it is contemporaneous with the bank's Art Deco head office in Adelaide and conveys a sense of solidity and stability that is consistent with the image that banks and other institutions of the time wished to convey. It was opened by the Chairman of the Gladstone District Council, Mr. W. S. Bennett, in 1937." For more information check out https://web.archive.org/web/20160301104058/http://apps.planning.sa.gov.au/HeritageSearch/HeritageItem.aspx?p_heritageno=16382.

Railway Yards
Train spotters come to Gladstone to see one of the wonders of the railway world. It is here that three railway gauges - the narrow, standard and broad gauge - all meet. Gladstone is on the main Crystal Brook-Broken Hill railway line, with branches going north and south. It is still operational with the Indian Pacific passing through during the week. The story of the three gauges is that the first rail line to the town from Port Pirie was a 3 ft 6 in (1,067 mm) narrow gauge which was built from Port Pirie in 1875, extended to Petersburg (now Peterborough) in 1880 and to Cockburn (near Broken Hill) in 1888. In 1884 a branch line from Gladstone to Laura was constructed. It was extended to Wilmington in 1915. A line from the south was completed in 1894 and In 1927, the line from Hamley Bridge through Blythe to Gladstone was converted to 5 ft 3 in (1,600 mm) broad gauge. Then in 1970 the line from Port Pirie to Broken Hill was converted to 4 ft 8 1⁄2 in (1,435 mm) standard gauge making Gladstone into a rare three-gauge break-of-gauge junction as the Wilmington railway line to the north remained an isolated narrow gauge line. In the 1980s, the broad and narrow gauge lines were closed, leaving Gladstone as a purely standard gauge station. At the railway yards it is possible to see the three gauges beside each other.

Tresylva Park
A place to relax in the centre of town, Tresylva Park is ideal for a picnic and has electric barbecues and a playground for children.

* The first Europeans into the area took up the 'Booyoolie (sometimes spelt 'Booyoolee') Run' in 1851 - some of the original buildings dating from this period are still standing.

* It wasn't until 1871 that the town was formally surveyed and the name Gladstone (an honour to the British Prime Minister William Gladstone) was given to the new settlement.

* A railway line from Port Pirie reached the town in 1875. It was built to ship wheat from the town's grain silos to the coast.

* In 1880 the famous Australian poet, C. J. Dennis, arrived in the town as a 4 year old child. His father ran the Gladstone Hotel and Dennis attended the local primary school.

* In 1937 the Savings Bank of SA opened an impressive Art Deco building in Gladstone Terrace.

* In 1940 Booyoolie and Gladstone finally agreed to accept Gladstone as the term to apply to both settlements.

* Today the Indian Pacific passes through the town on its way from Sydney to Perth. The railway is also used for the transportation of lead and zinc from Broken Hill to Port Pirie.

There is a useful local website. Check out http://www.gladstonesa.com.au. 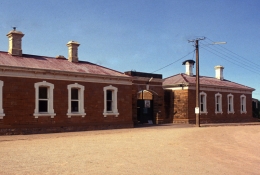 Entrance to the Gladstone Gaol 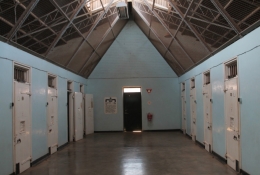 The interior of the Gladstone Gaol. Now budget accommodation. 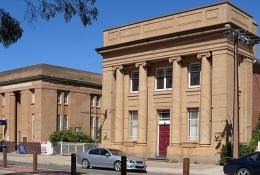 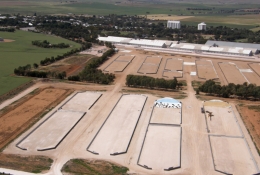