Gladstone is Tasmania's most north-easterly township. It was once an important mining town for both gold and tin mining. Today it is a small settlement which is an ideal point to access the north-eastern coast of the island which is notable for the rich diversity of its fauna and the exceptional beauty of its pristine, white beaches.

The tiny mining town of Gladstone is located 322 km north from Hobart and 129 km north-east from Launceston.

Exploring the North-East Coast
Gladstone is a base for a number of remarkably beautiful places on the far north-east coast of Tasmania. Of particular interest are Cape Portland, Petal Point, Tomahawk and Musselroe Point all of which offer idyllic coastal bays and beaches.

Tomahawk
Tomahawk is a caravan park and a general store surrounded by superb beaches and huge sand dunes. This tiny town was established at the mouth of the Tomahawk River in the 1860s when gold was discovered in the region. It was, in its brief heyday, a busy port as men and supplies destined for the goldfields were unloaded at the local jetty.

Mount William National Park
The great appeal of the Mount William National Park, which lies to the east of Gladstone, is that it is the home to Tasmania's only native kangaroo, the Grey Forester. As well it is possible to see a rich diversity of wildlife in the park including Bennetts wallabies, Tasmanian pademelons, wombats, Tasmanian devils, echidnas and more than 100 species of birdlife including the tawny-crowned and crescent honeyeaters, the superb blue wren, firetail finch, and the kookaburra.  It is also, for those prepared to travel on "less than perfect" roads, a wonderful stretch of unspoilt coastline with some glorious and beautiful beaches. For more information check out http://www.discovertasmania.com/attraction/mtwilliamnationalpark

* Prior to European settlement the area around Gladstone was inhabited by the local Pyemmairrener Aboriginal people who had lived there for thousands of years.

* The settlement of Gladstone came into existence after 1874 when tin was discovered in the area. Miners rushed to the area and grew up around the tin mine.

* Today mining has been replaced by tourism with bushwalkers, holidaymakers and gemstone enthusiasts attracted to the district. Around Gladstone sapphires, topaz, agate and amethysts can be discovered.

There is no visitor information centre in Gladstone but the staff at the Gladstone Hotel, 37 Chaffey Street, will help. tel: (03) 6357 2143 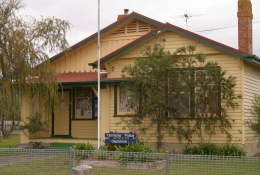 The Police Station at Gladstone (photo 1995) 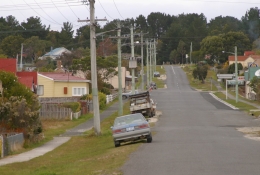 The main street of Gladstone in 1995. 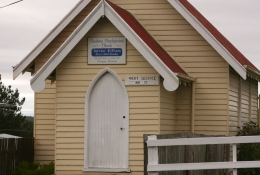 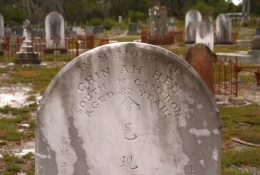