On one level they are a unique natural phenomenon which deserves to be gazed upon with awe. On another, more geological level, they are a series of steep-sided volcanic plugs which dominate the landscape of the Sunshine Coast hinterland. They are formed of rhyolite and trachtyte, lavas which hardened inside the vents of tertiary volcanoes. The visitor should look and admire and drive to the lookouts. The adventurous visitor should walk, and possibly even climb, these remarkable structures.

The Glass House Mountains are located 72 km north of Brisbane via Highway One.

In his Journal on 17 May, 1770 Captain James Cook wrote: "These hills lie but a little way inland, and not far from each other: they are remarkable for the singular form of their elevation, which very much resembles a glass house, and for this reason I called them the Glass Houses …". This is a reference to their appearance which reminded him of the glass furnaces in Yorkshire.

Glass House Mountains National Park
What are they?
The Glass House Mountains are a series of eleven intrusive volcanic plugs, formed of rhyolite and trachtyte, lavas which hardened inside the vents of tertiary volcanoes, about 25-27 million years ago. The cooling of the mountains resulted in the formation of vertical columns which can be observed on Mount Beerwah, Mount Ngungun and Mount Coonowrin.

The Lookouts
There is a main lookout (see the downloadable http://www.nprsr.qld.gov.au/parks/glass-house-mountains/pdf/glasshouse-mtns-maps.pdf map) which is immediately south of Mount Beerwah. Across the Bruce Highway is the excellent Wild Horse Mountain Lookout and there are fine views across the entire region from McCarthy's Lookout at Maleny. Each offers different and impressive views of the main volcanic plugs in the range. For more information on the Wild Horse Mountain lookout check out http://www.glasshouse-mountains.com/Wild-Horse-Mountain.html.

Walks in the Area
In recent times Queensland National Parks have closed down a number of the walks. It is necessary to go to their website - http://www.nprsr.qld.gov.au/parks/glass-house-mountains/ - to ensure that it is possible to do the walks. For example, in early 2014 the website announced that both the Mount Beerwah and the Mount Tibrogargan tracks were closed. The problem lies with the geology of the area. High rockfall risk makes routes unstable. There is a specific download - http://www.nprsr.qld.gov.au/parks/glass-house-mountains/pdf/ghmtns-walks-routes-map.pdf - which details the routes to climb to the top of Mount Beerwah and Mount Ngungun. There is also some very detailed information available at http://www.glasshouse-mountains.com/Glass-House-Mountains-Walks.html which offers other walks in the area. But be warned: the latter is not an official site and some of the walks may be closed.

Matthew Flinders Climbs the Mountains
Matthew Flinders spent 16 days travelling up and down the coast north of Moreton Bay. At one point he climbed Mount Beerburram and was able to survey the whole of Moreton Bay and the coastline. Flinders took a small boat up a creek that seemed to be heading towards the volcanic plugs. About 9.30 am, accompanied by two sailors and an Aborigines, he left the boat and walked through a swampy area which was covered with mangroves. He noted a flat-topped peak (Tibrogargan), decided he should visit the highest plug (Beerwah), but seeing the more rounded plug (Beerburrum) he headed for it and after walking about 15 km from the boat he reached the top where he had a superb view of the surrounding countryside. He noted that to the south there were the signs of Aboriginal campfires and that Beerburrum appeared to be made up of loose stones which made the journey up and down the mountain quite difficult. It is still possible to replicate Flinders' journey and climb Mount Beerburrum. Check out http://www.nprsr.qld.gov.au/parks/glass-house-mountains/pdf/ghmtns-walks-routes-map.pdf.

The Aboriginal Significance of the Mountains
The local Aboriginal legend sees the 364 m Mount Tibrogargan (it translates as 'biting Sugar Glider' - sugar glider is 'chibur'  and biting is 'kaiyathin') as the father and highest mountain and Mount Beerwah (555 m) as the mother. The local word birra-wandum means climbing up to the sky - birra meaning 'sky' and wandum meaning 'climbing up'.

The legend tells how Tibrogargan and Beerwah had a number of children of whom Coonowrin (377 m - the narrowest of the volcanic plugs) was the eldest;  Tunbubudla (tunba means 'mountains' and budla means 'two') were the twins (293 m and 312 m); and the other children were Coochin (235 m), Ngungun (253 m), Tibberoowuccum (220 m) (chibur meaning 'sugar glider' and waiarangum meaning 'hungry'), Miketeebumulgrai (199 m) and Elimbah (129 m).

One day Tibrogargan noticed that the sea was rising and called out to Coonowrin to help his pregnant mother to gather the children together so the family could flee to the mountains.

Instead of helping his mother, Coonowrin ran away in fear. Tibrogargan, outraged by his son's apparent cowardice, chased him and hit him so hard with a club that he dislocated his neck.

When the seas retreated the family returned to the coast. Conowrin, ashamed of his cowardly behaviour, went to Tibrogargan and asked for forgiveness but his father wept with shame. He went to his brothers and sisters to ask for their forgiveness and they also weep with shame. This is why the area has so many small streams.

Tibrogargan then asked Conowrin why he had not helped Beerwah. He explained that he did not know she was pregnant. Tibrogargan turned his back on his son in shame. Today Tibrogargan still refuses to look at his son and Beerwah is still pregnant because it takes a long time to give birth to a mountain.

* The Glass House Mountains were formed approximately 25-27 million years ago.

* Prior to European settlement the area around the Glass House Mountains was occupied by people from the Gubbi Gubbi Aboriginal language group.

* On 17 May, 1770 Captain James Cook became the first European to sight the volcanic plugs.

* In July-August, 1799 Matthew Flinders sailed up the Queensland coast. He explored the area for sixteen days and climbed Mount Beerburrum.

* Today the volcanic plugs are part of the Queensland National Parks. The area around the mountains, because of the rich volcanic soil, produces pineapples, papaws, strawberries, avocados and passionfruit, as well as vegetables and macadamia nuts.

The Queensland National Park site - http://www.nprsr.qld.gov.au/parks/glass-house-mountains/ - has a number of useful downloads including walking tracks, summit routes and a species list. There is also a very useful, personal website created by a person living in the area - http://www.glasshouse-mountains.com/ - which provides lots of information about walks and things to do. 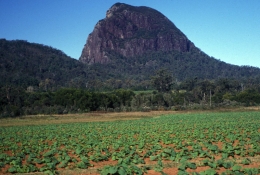 Tibrogargan, the most impressive of the mountains, looms above fields rich with volcanic soil. 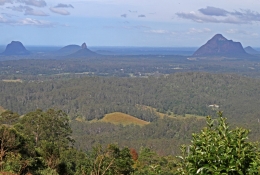 View of the Glasshouse Mountains from Mountain View Road Maleny.