There is one powerful reason for stopping at Glenbrook. It has an excellent Visitor Information Centre which will help anyone planning to explore the Blue Mountains. It has a wide range of maps, books and brochures. Beyond that it is a quiet township/suburb in the foothills of the mountains which offers access, via a one-way road, to historic Lennox Bridge; has a number of excellent cafes in the town's main street; and is the entry point to the easternmost section of the Blue Mountains National Park with short drives to see fascinating Aboriginal rock art.

Glenbrook, located 61 km west Sydney via the M4 and Western Highway, is the first major settlement on the eastern edge of the Blue Mountains.

There are over ten Glenbrooks around the world. It is a popular name usually applied to a place where there is either (or both) a glen and a brook. In the case of Glenbrook, New South Wales it was given the name to indicate the creek which supplied fresh water to the early explorers. When the railway came up the Blue Mountains it was named Wascoe's Siding after a nearby inn but this was changed to Brookdale and from there it was a short step to Glenbrook which became the official name in 1879.

Glenbrook Lagoon
It is nothing more than a quiet lagoon in the heart of Glenbrook with the occasional duck and lots of reeds around the edges. However it is a place which determined the importance of the area. Blaxland, Wentworth and Lawson stumbled upon this important source of fresh water and described it as  'a large lagoon of good water full of very coarse rushes' on 12 May 1813. There is a belief that the lagoon was created by a meteorite. It is easily accessed by turning right at the traffic lights after the Glenbrook Visitor Information Centre, turning left into Moore Street and then right into Glenbrook Road. It is on Glenbrook Road.

The Glenbrook Native Plant Reserve
Directly opposite the Visitor Information Centre is the small Glenbrook Native Plant Reserve. It covers 2 ha beside the Great Western Highway and showcases a diversity of Australian Plants most of which can be found growing wild in the Blue Mountains. There is a small nursery (plants are for sale), an education centre, a small landscaped garden featuring orchids and ferns and walking trails. Admission is free and it is open Sat, Sun and Wed noon - 4.00 p.m. For more information tel: (02) 4739 8597.

Lennox Bridge
Such is the importance and historic significance of this old bridge, reputedly the second-oldest in Australia, that in recent times sandstone steps have been built and the visitor can go under the bridge to inspect the remarkable stonework which has stood for more than 180 years. The bridge, which is now listed by the National Trust, was constructed by a team of twenty convicts under the supervision of David Lennox (1788-1873), a Scottish master mason who had trained with the great British bridge builder, Thomas Telford, before emigrating to Australia. The bridge was Lennox's first job upon his appointment as New South Wales Superintendent of Bridges. Work was begun in November, 1832 and the bridge was completed in July, 1833. The bridge is held up on a 3 metre radius stone arch and is about 10 metres above the gully floor. On the keystones were carved 'David Lennox' and 'A.D. 1833'. Both have been badly eroded. It was used continuously from 1833 until 1926 when a crack was found in it. It opened again to one-way traffic in the 1980s and remains a monument to Lennox's skills.
There is some debate about the status of the bridge with pedants arguing that a small bridge in Sydney's Botanic Gardens (just behind the cafe) is the oldest. It was built for Lady Macquarie to travel from Government House to her "chair" overlooking the harbour. If this is accepted then the bridge at Richmond in Tasmania is the second oldest and Lennox Bridge is the third although it can claim to be the second oldest stone arch bridge in Australia. The bridge is accessible from Emu Plains only by foot from the car park at the top of the old Great Western Highway. The road is one way. To drive there it is necessary to travel to Glenbrook, turn right at the lights after the Visitor Information Centre (into Hare Street), left into Levy Street, right into Glenbrook Road and right again into Mitchells Pass. The bridge is on Mitchells Pass.

Bushwalks in Blue Mountains National Park
The main appeal of Glenbrook lies in its bushwalks and its easy access to the lower reaches of the Blue Mountains National Park. In essence this appeal focuses on (a) seeing kangaroos in the wild very close to suburban Sydney (b) seeing some fine examples of Aboriginal rock art (c) having some excellent bushwalking through pleasant, rather than adventurous, bushland and (d) enjoying some excellent vantagepoints with fine views over the Sydney Basin.

The Blue Mountains National Park, now part of the Greater Blue Mountains World Heritage Area which is over one million hectares, is an exceptional area of box canyons, waterfalls, 300m cliffs which has over 140 km of walking tracks. At Glenbrook there are a number of easy walks from the National Park Glenbrook Entrance. Check out http://www.bluemts.com.au/info/thingstodo/bushwalks/#glenbrook for basic information on all ten tracks in the area. Of particular interest are (a) the 6 km walk to Euroka Picnic Area. There was a time when, particularly in the early morning and late evening, it was a certainty to see kangaroos lying around on the grass at Euroka. Sadly this has become less common but it is still the closest place to Sydney's CBD where you will see kangaroos in the wild.

The other premier walk in the park is the easy, 8-km, four-hour circuit walk from the information centre up the Red Hands Creek Valley, through rainforest to Red Hands Cave. It is possible to drive on a well marked unsealed road to the Red Hands Cave. The information brochure records that these ancient hand prints, hand stencils and grinding grooves are 'some of the best-preserved examples of hand stencils and prints in the Sydney Region ... Interpretative  signs at the cave tell the story of the hands and the people who made them ... While knowledge of the original meaning of the hands has been lost, they remain a link with the Aboriginal people who have lived in this land for so long ... Red Hands Cave is an irreplaceable part of Australia's cultural heritage.'

Zig-Zag Railway and Lucasville Station
At the end of Knapsack Street (on the northern side of the Great Western Highway) there is a track which leads to the park at the bottom of Mitchells Pass. This path is an opportunity to observe some of the remnants of the original zig-zag railway line (the cuttings and the original Gatekeeper's Cottage) which was built in 1863 by John Whitton, the Engineer-in-Chief for the New South Wales Railways, and used until 1891. The path, appropriately, reaches the John Whitton Memorial Park. It is a pleasant walk which provides panoramic views over the Sydney basin. On a clear day you can see the CBD.

* Blaxland, Wentworth and Lawson reached Glenbrook Lagoon and described it as  "a large lagoon of good water full of very coarse rushes' on 12 May 1813.

* In 1815 when William Cox constructed the first road over the mountains. Glenbrook became an important stopping point because a storeroom had been built beside the lagoon. Its importance increased when Governor Macquarie established a military depot near the lagoon to monitor the movement of people and goods on the road.

* In Fourteen Journeys over the Blue Mountains, Major Henry Antill provides a description of Glenbrook in 1815 as 'a good log hut with two rooms, one of which answers as a store. It is placed about 100 yards on the right of the road, near a small lagoon of fresh water. The soldiers have enclosed a small piece of ground for a garden, and one of them had displayed some taste in laying it out in little arbours and seats formed from the surrounding shrubbery.'

* Glenbrook became a town in the 1870s as a result of the arrival of the railway. In 1874 the zigzag railway up the Lapstone monocline was completed. Wascoe's Siding, named after a nearby inn, was established and water from Glenbrook lagoon was piped to the trains. This siding became a passenger station in 1877. In 1878 it was named Brookdale and was changed to Glenbrook in 1879.

* Arthur Streeton, the great Australian painter, lived in Glenbrook in 1891. He described the district: "All around and above fine tall red gums, smooth of trunk, as though cast in iron ... Below me runs a crystal virgin brook with a rocky bottom and rushes ..."

Blue Mountains Visitor Information Centre, Hamment Place, Great Western Highway, Glenbrook, tel: 1300 653 408 is open from 8.30am-4.00pm (3.00pm on Sundays) seven days a week. This is the first information centre for people entering the Blue Mountains from Sydney and is remarkably comprehensive in its information, maps and brochures. It makes good sense to stop and get all the information you need before heading off into the mountains. 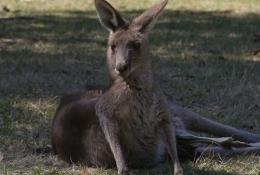 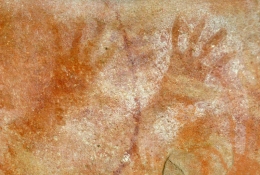 Ancient hands at the Red Hand Cave in the Blue Mountains National Park. 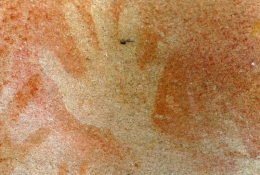 A stencilled hand in the Red Hand Cave in the Blue Mountains National Park. 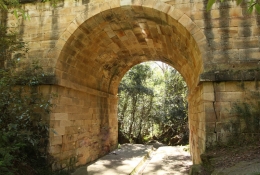