Gnowangerup is a typical wheatbelt service town. In the local shire there are over 100,000 ha where sheep are raised and wheat is grown. This is a rural working area where the main attractions are wildflower reserves, the beautiful Stirling Ranges National Park and small local museums. The one wild incongruity is a 3 m high statue of Ned Kelly which is a long, long way from Victoria where all of his exploits occurred.

Gnowangerup is located 365 km south east of Perth via the Albany Highway and Tambellup West Road.

There is a minor dispute about the meaning of the Noongar Aboriginal word 'gnowneerup' with some sources claiming it means the 'place of mallee hen eggs' and others suggesting it means 'place of the female mallee fowl'. Both are very similar and accept the Noongar roots of the word. Over the years locals, perceiving a problem with the pronunciation, have attempted to change the town's name but they have been unsuccessful.

Aylmore Mineral Springs
The mineral springs at the northern end of the town (the springs were what drew people to the area in the first place) are located near the Gnowangerup Swimming Pool off Park Road. According to Aboriginal folklore two warriors fought to the death and where they died two springs, stained red with their blood (the water is actually stained by the high iron content in the area), appeared. They still bubble up and make their way to the Gnowangerup Creek through the wetlands near the swimming pool. On 7th March 1934, at a cost of £400, the town’s first swimming pool was opened to the public. It was fed from the mineral springs which flowed at a rate of one litre per second. The pool was used until 1968 when it was closed due to health regulations. Subsequently the current pool was built.

Gnowangerup Historical Centre
Located in Yougenup Road, this small local museum recalls the history of the town and the early settlers. There is a plan to develop an Aboriginal Heritage Museum and Keeping Place to record the history of the Noongar people and the Gnowangerup Mission which ran from 1935-1964. For more information and opening times contact either tel: (08) 9827 1361 or mobile 0427 271 370.

Ned Kelly Statue
Admire the enthusiasm of the creators of this unusual statue. The argument is that Ned Kelly's daughter (the fact that Kelly didn't have a daughter doesn't seem to have slowed down the local enthusiasm for the legend) once ran the Gnowangerup Hotel. It is probably more accurate to say that in 2000 a chainsaw artist, Rob Fairclough, took a single Sugar Gum tree and carved a three metre Ned out of it. Not surprisingly it has become a tourist attraction.

Stirling Range National Park
The central appeal of the area is the beautiful and dramatic Stirling Range National Park which boasts 15 peaks over 900 m and 50 peaks above 600 m. It is the only significant mountain range in the southern half of Western Australia and offers the visitor jagged cliffs, sheltered gullies, superb panoramic views and a staggering 1500 species of flora - many of which grow nowhere else on the planet. There is a 42 km drive through the park, most of it on good dirt roads suitable for 2WD driving, which allows the visitor to experience an area in all its beauty.

Mount Toolbrunup (1052 m) - 4 km return. Hard, 3 hours. This walk is often regarded as the best in the Park. Excellent 360° views from the summit and dramatic rocky outcrops provide spectacular scenery.

Wildflower Tours
Wildflowers and orchids walks are run each spring from the Mt Trio Bush Camp and Caravan Park which borders the Stirling Range National Park. Check www.mttrio.com.au for details.

* On one of his many journeys of exploration between 1830-1835 the Western Australian Surveyor-General, John Septimus Roe, became the first European to pass through the area.

* By the 1850s European pastoralists had settled in the area.

* In the early 1870s Thomas Quinn acquired land around Gnowangerup Spring and was using it as pasture for the horses of the sandalwood cutters who moved through the area.

* The first merino sheep were introduced into the area in 1908.

* Today Gnowangerup is a typical farming service centre for a shire where farmers raise beef cattle and sheep and  growing wheat, barley, lupins, peas and linseed.

There is a good, comprehensive brochure available to be downloaded. Check out http://www.gnowangerup.wa.gov.au/files/2113/6514/5997/GnowTourismMapBrochure-PRINTV3.pdf 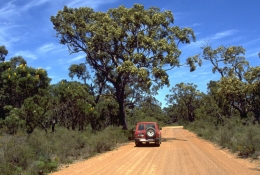 A typical dirt road through the Stirling Ranges National Park. 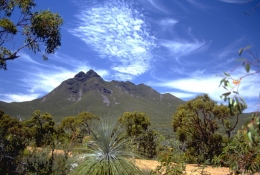 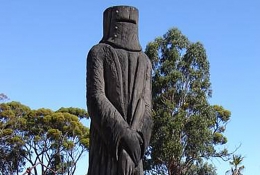 The 3 m Ned Kelly, carved in 2000 by chainsaw artist, Rob Fairclough, outside the Gnowangerup Hotel.