Googoogong is almost not a town. It has a tiny population and, realistically, is driven by the General Store (which also includes the Post Office and Newsagency) and the Gooloogong Hotel. The town's appeal lies in the genuinely fascinating Gooloogong Memorial Park with its plaques recording the histories of most of the town's well known families and Croote Cottage, an historic pise dwelling built around 1827 by a convict gang.

Gooloogong is located 340 km west of Sydney via Bathurst, Blayney and Canowindra. It lies between Cowra and Forbes

A cattle station named 'Gool-a-gong' was established in the district in the 1820s by a Dr William Redfern, the personal physician to Governor Macquarie. No one is sure why Redfern named his property Gool-a-gong but it is known that Gooloogong was a Wiradjuri word of unknown meaning.

Gooloogong Memorial Park
The Gooloogong Memorial Park is a unique record of the people whose families have lived for generations in this small country town. It is a pleasant place to have a picnic and spend some time. It contains a history of the local railway from 1922-1978 with an interesting collection of historic photos; a plaque recognising the Wiradjuri people as the original owners of the land; and interesting pieces of war memorabilia from both of the twentieth century world wars. The highlight, however, is the plaques which record, in suitable detail, the history of many of the families who live in the town and the surrounding region. Here is a unique opportunity to see how a small Australian country town was formed and how it evolved.

Croote Cottage
Head out on the Kangarooby Road (it runs beside the pub and past the General Store) and follow the signs to Croote Cottage. It is well protected by surveillance cameras and has to opened for inspection by the owners. Ask at the General Store or Hotel for times of opening or contact the Cowra or Forbes Visitor Information Centres.

Croote Cottage was built by convicts around 1827 and, as such, is one of the oldest buildings west of the Blue Mountains. It is one of the most important historic pioneer homesteads on the Central Western Slopes having been built of pise bricks and constructed with holes in the walls so the residents could protect themselves against bushrangers and local Aborigines. The original building had shutters and a shingle roof. The walls were 20 cm thick and there was a cellar with a trapdoor where, in case of attack, the women and children could be hidden. Today the cottage is decorated with authentic period furnishings

In 1837 John Dowd and his wife moved into the cottage and it is still owned by his descendants. In the early years it had a particularly colourful history. It is believed that during John Dowd's ownership it was visited by the bushranger Ben Hall and Hall, finding Dowd ill in bed, offered to send for a doctor. Apparently Dowd, according to the legend, refused the money and delivered a lecture to Hall about his need to mend his wicked ways. The bushranger allegedly replied: "Too late now old chap" and rode off.

On another occasion Bishop John Polding, the first Catholic Bishop in Australia, said mass for the local Catholic community at the cottage.

* Prior to European settlement the district was the home to the Wiradjuri Aboriginal people.

* A cattle station named 'Gool-a-gong' was established in the district in the 1820s by a Dr William Redfern, the personal physician to Governor Macquarie.

* In 1827 convicts built Croote Cottage out of pise. It is one of the earliest buildings still standing west of the Blue Mountains.

* In 1869 the settlement acquired its first school.

* By 1880 St Malachy's Catholic Church was completed and holding mass for the local Catholic community.

* In 1904 the distinctive Holman Bridge, a timber truss construction, was completed across the Lachlan River.

* In 1922 the North Goolagong siding was opened with the railway running from Cowra to Eugowra.

* In 1924 a 20 tonne weighbridge and 15 tonne crane were installed at the railway siding.

* In 1924 the town changed its name from Goolagong to Gooloogong.

* The railway was closed down and dismantled in 1979.

The Forbes website has good information on the town. Check out http://www.forbes-nsw.com/Gooloogong.html for details. 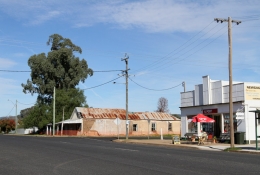 The town's General Store - the source of all information. 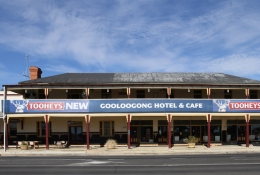 The Gooloogong Hotel, the most prominent building in town, is a landmark on the road from Cowra to Forbes. 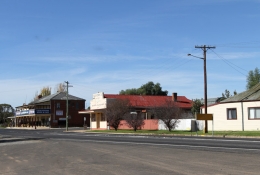 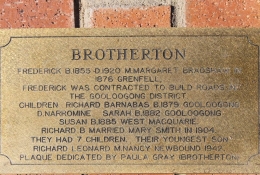 One of the many plaques recording family histories in the Gooloogong Memorial Park.

Croote Cottage, built by convicts in 1827. 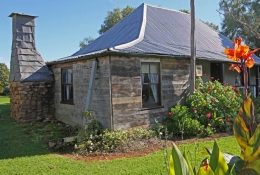 The rear of Croote Cottage.