Gordonvale, a sugar milling town, is now part of the southern urban sprawl of Greater Cairns. It is growing rapidly from a country town to a suburb of the larger city. The appeal of the town is that, unlike most functional and industrial sugar milling towns, it is centred around a park - it is more like a village green - and the buildings in the main street have a quiet historic charm. It also can lay claim to being the place where the dreaded cane toad was first introduced to Australia.

The settlement was originally known as both Mulgrave and Nelson. In 1913 it was named Gordonvale to honour an early settler, who had been a butcher and a director of the Mulgrave sugar mill, named John Gordon.

Mulgrave Settlers Museum
Located at 60 Gordon Street and open from 10.00 am - 2.00 pm Monday to Saturday, this typical local museum has displays reflecting the local history. Of particular interest is the exhibit on the Chinese in the area; a display on the miners who passed through the town; the first settler family; and a history of cedar cutting in the area. There is a useful website. Check out http://mulgravesettlersmuseum.weebly.com. Tel: (07) 4056 1810.

Norman Park
Unlike most Australian country towns, Gordonvale has a "village green" with the town's main pubs on one side, the sugar mill on the other side, and tennis courts, a war memorial and other pieces of local history in the large, flat "green" in the middle.

The Cane Toad Mural
Opposite the town's post office is a wall mosaic which records, in amusing detail, the journey of bufo marinus (the cane toad) from Hawaii to the local Toad House (1935), the release of cane toads (1936) and how it failed to curtail the activities of the cane grubs. Instead it became a menace across the north.

The Statue of the Cane Cutter
On the side of Norman Park which is adjacent to Norman Street, is the Cane Farmer statue which was designed by Anna Holan, manufactured in the Holan Foundry and dedicated in 1995. It was bequeathed by the estates of Charlie and May Crossland to honour the pioneers of the sugar industry in the Mulgrave area. The Mulgrave sugar mill on the far side of the park started operation as long ago as 1896.

Air Raid Shelter (1942)
A reminder of the genuine fear in northern Australia during World War II. This air raid shelter was built in February, 1942 to protect people in the event of an air attack after the Japanese had entered the war. The air raid shelter, one of three, was built by the Mulgrave Shire Council. The other two shelters were 'bunker' shelters dug into the ground and camouflaged by trees. There were two above ground shelters built. After the war the two bunker shelters were demolished and, in 1950, this shelter became a public toilet. There was talk of it being demolished but local activists fought to retain the shelter as a memorial. Today the shelter has a mural on the outside and it is maintained by the local RSL and Historical Society.

Walsh's Pyramid (Djarragun Mountain)
Behind the town stands 'The Pyramid' or Pyramid Hill, a volcanic core which is shaped as its name suggests. It is 922 metres high. Each year there is a competition, known as the Great Pyramid Mountain Race, to see who can get to the top in the shortest time. The race was started by two cane farmers and became official in 1959. It is now part of the National Race Endurance Calendar. It is held on the second weekend in August. There is a useful and very detailed website - check out http://www.cairnsattractions.com.au/explore/getting-back-to-nature/walshs-pyramid.419.html. It provides clear instructions for visitors wanting to walk (or run) to the top of the pyramid.

* Prior to the arrival of Europeans the area was home to the Yidinjdji Aboriginal people.

* In 1876 an expedition passed through the area and found Aborigines living in thatched dwellings where the Mulgrave Mill now stands.

* In 1877 the Alley family moved into the area which William Alley subsequently named Plain Camp.

* By 1887 the first settlers, the Alley and Blackwell families, had cut a track to Cairns so they could ship out the cedar they were felling in the district.

* By the 1880s the area had been settled and it was used as one of the many routes from Cairns to the mining town of Herberton.

* A cane farm called Pyramid Plantation was established in 1882. That year also saw the opening of the first sugar mill in the area.

* John Gordon, an early settler after whom the town is named, moved to the area in the early 1880s.

* In 1883 a sugar mill was built but it operated for only two seasons.

* The settlement was named Mulgrave in 1890.

* The town was surveyed in 1896 and renamed Nelson.

* In 1897 a new mill opened and, at the same time, the Cairns to Mulgrave railway was opened.

* In 1913 the town's name was changed to Gordonvale. It was named after John Gordon, an early settler.

* On 22 June 1935 102 cane toads were released near Gordonvale in the optimistic belief that they would wipe out the Frenchi beetle and grey-back beetle which were damaging the local sugar cane crops.

* During World War II over 3,000 American servicemen were stationed at Gordonvale.

* In 2001 the Djarragun P-12 College opened for indigenous students.

The Wikipedia entry, obviously written by a committed local, has lots of interesting information about the history of the town. Check it out at https://en.wikipedia.org/wiki/Gordonvale,_Queensland. 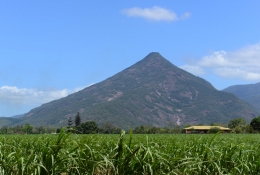 Walsh's Pyramid known to the local Aborigines as Djarragun Mountain. 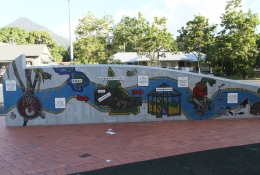 The town "celebrates" the arrival of the Cane Toad with a mural wall telling the story in Norman Park. 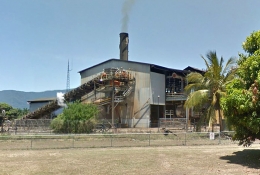 The Mulgrave Mill in Gordonvale. 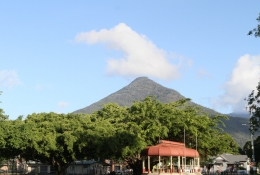 The band rotunda in Norman Park with Walsh's Pyramid (Djarragun Mountain) looming in the background. 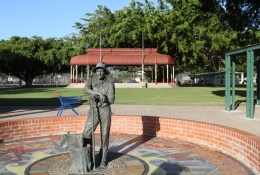 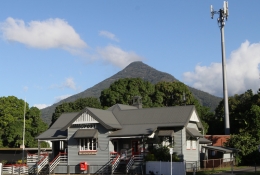