In 2018 the tiny town of Goroke (population 200), a small pastoral and agricultural centre - mainly wool and wheat - in the heart of the Wimmera-Mallee, achieved international attention when the New Yorker, in a long article, revealed that Gerald Murnane, a little known but widely acclaimed Australian novelist, called it his home. It is a town with a wide main street, on the Natimuk-Frances Road, and it was laid out in a grid pattern which is only two blocks across and five blocks deep. Most of the attractions of the district lie outside the town.

Goroke is located 368 km north-west of Melbourne and 68 km west of Horsham.

Goroke was laid out in 1882 and named after a local Wotjobaluk Aboriginal word which probably means "magpie".

Gerald Murnane - The Town's Most Famous Inhabitant
Gerald Murnane's publisher, Text Publishing, records his biography as "Gerald Murnane was born in Melbourne in 1939. He has been a primary teacher, an editor and a university lecturer. His debut novel, Tamarisk Row (1974), was followed by nine other works of fiction, including The Plains now available as a Text Classic, and most recently A Million Windows. In 1999 Murnane won the Patrick White Award and in 2009 he won the Melbourne Prize for Literature. He lives in western Victoria."
An article in The Australian explained his connection with Goroke: "Murnane moved to Goroke in 2009, after the death of his wife of 43 years, Catherine. Their ­eldest son, Giles, whom Murnane repeatedly described as a hermit, had come to Goroke years earlier, having chosen the town off the map for its cheap housing. Murnane had always been attracted to the country, and the first time he ­visited Giles, driving past the town graveyard, he had a premonition, “calmly and wordlessly,” he later wrote, “as one understands things in dreams”: That’s where my ashes will lie."
The articles which caused all the excitement about his importance, and suggested that he was a possible Nobel Prize contender, can be read at https://www.newyorker.com/books/page-turner/a-strange-australian-masterpiece and https://www.nytimes.com/2018/03/27/magazine/gerald-murnane-next-nobel-laureate-literature-australia.html.

Goroke Memorial Hall Walls of Honour
In 2018, after extensive research, the town managed to put up photographs, and brief biographies of all the local people who went off to fight in the Great War. The information is on the walls of the Memorial Hall. It can be accessed by asking at the Post Office. Tel: (03) 5386 1100.

Lake Charlegrark
Located 26 km west of Goroke, along the Natimuk-Frances Road, there is an intersection with the Kaniva-Edenhope Road which runs south to Lake Charlegrark which has boating, water skiing and picnicking facilities as well as accommodation at the Lake Charlegrark Caravan Park and Cottages. This is a popular destination for anglers hoping to catch Murray cod, red fin, yellow fin and yabbies. For more information check out http://www.kaniva.info/lake-charlegrark.

Lake Bringalbert
Located 37 km south-west of Goroke, Lake Bringalbert is a quiet lake which has boating facilities and is populat with water skiers. It has new toilet facilities. It is known for yabbying and it has fine displays of wildflowers in spring. Check out http://caravanersforum.com/viewtopic.php?t=54750 for excellent information from people who have camped on the shores.

Lake Ratzcastle Reserve
Located 12 km south of Goroke on the Edenhope-Goroke Road, Lake Ratzcastle is a noted fishing spot (when there is water in the lake), particularly for yellowbelly, and it has a campground which is suitable for tents and caravans. There is no power at the site but there are toilets and a solar-heated shower. Check out http://parkweb.vic.gov.au/explore/parks/lake-ratzcastle-l.r.

Lake Karnak Wildlife Reserve
Located 17 km south of Goroke off the Edenhope-Goroke Road (turn east at Church Lane), Lake Karnak covers roughly 160 ha and is fairly described as a freshwater marsh with about 75% covered with thick weed and dead trees. It is popular, if there is water, with hunters. For more information check out http://parkweb.vic.gov.au/explore/parks/lake-karnak-w.r. and https://www.facebook.com/pages/Lake-Karnak-Wildlife-Reserve/1719586891661522.

Little Desert National Park
To the north of Goroke is Little Desert National Park, covering 132,000 ha and stretching across to the South Australian border, it is the second-largest national park in Victoria. The first reserve was created in 1955 to protect the mallee fowl and the park was declared in 1968. There is a useful brochure with detailed maps which can be downloaded at http://parkweb.vic.gov.au/__data/assets/pdf_file/0007/315772/Visitor-Guide-Little-Desert-National-Park.pdf.
Despite its name, the dry hot summers and sandy soil, this is not a true desert. The park receives 400 mm of rainfall per annum (mostly in winter) and supports a range of fauna including over 220 bird species, and 670 plant species.
It has extensive heathlands with tea-trees, banksia and she oak and many spring wildflowers. Wildlife includes possums, the black-faced kangaroo, the silky desert mouse, reptiles such as the bearded dragon and the short-tailed snake. Perhaps most famous of the fauna is the mallee fowl which is indigenous to this area. Its presence is signified by a mound up to five metres in diameter and one metre high. It lays its eggs inside the mound which it adjusts each day to maintain its temperature at 33° Celsius.
The eastern section, lying south of the Western Highway between Dimboola and Nhill, is the most interesting and accessible. There are five campgrounds - Horseshoe Bend, Ackle Bend, Mallee Walkers Camp, Kiata Campground, Yellow Gums Walkers Camp - and a 7 km gravel road from Dimboola along the Wimmera River The route is signposted. There is a network of walking tracks with heavy concentrations of waterbirds and kangaroos by the river and adjacent woodlands. A short distance from Horseshoe Bend is the start of the short Pomponderoo Hill Nature Walk.

Little Desert Discovery Walk
Located east of the Nhill-Harrow Road, some 30 km north-east of Goroke, is the Desert Discovery Walk (marked with signposts and track markers). The total distance is 74 km but the circular track which heads east from the Kiata Campground (66 km from Goroke) loops around to Ackle Bend and Horseshoe Bend Camp grounds. It is possible to take a single day walk or to do the entire walk (it is estimated to take a total of 25.5 hours) over a period of two to four days. The Parkweb website describes the pleasures of the walk as including: "This walk is ... especially colourful in spring. The park has 670 species of native plants and over 220 bird species recorded ...  find beauty in the small things.
From the myriad of insects such as the Jewel Beetle, one of the deserts pollinators, to the nocturnal inhabitants like the bats and pygmy possums ... Keep an eye out for shingle-back lizards, skinks and brown snakes ... and don’t forget to look up ... for Wedge-tailed eagles."
There are detailed track notes and a map on ParkWeb. Check out http://parkweb.vic.gov.au/__data/assets/pdf_file/0011/694757/LittleDesert-DiscoveryWalkTrackNotes.pdf. The notes also provide detailed information on camping and staying overnight in the park.

Little Desert Lodge
The Little Desert Lodge, located 44 km north-east of Goroke at 1457 Nhill-Harrow Road, offers a range of accommodation options and is devoted to "nature tourism experiences". It offers a Malleefowl discovery experience at the property's Malleefowl Aviary; nocturnal wildlife experiences where sugar gliders, brush-tailed bettongs and bushstone curlews can be sighted; excellent bird watching and a number of trails for bushwalking. In season the wildflowers are superb with over 670 species of native daisies, rare orchids and flowering tea trees. For more information check out http://littledesertlodge.com.au/experiences.

Jane Duff Reserve
Located 24 km east of Goroke is the Jane Duff Reserve, a 26 ha roadside reserve with stands of native vegetation. It is the southernmost limit of the mallee. There are picnic facilities and a monument to Jane Duff, one of the three Duff children who got lost in the bush for nine days in 1864. The monument reads: "In memory of Jane Duff who, in August 1864, succoured her brothers Isaac and Frank for 9 days when lost in the bush near this spot." The monument was erected by school children and citizens of Victoria in March, 1935. When they were located by an Aboriginal tracker only Frank Duff (aged four) was conscious but all three were nursed back to health. Their story was immortalised in a popular story which was called 'The Lost Children'. There is a very detailed account of the entire Jane Duff story at http://www.susangeason.com/nonfiction.html#b.

* Prior to the arrival of Europeans the district was occupied by the Wotjobaluk Aboriginal people.

* Pastoral runs were taken up in the district in the 1840s.

* In 1864 Jane Duff and her two brothers were lost for nine days in the area.

* The town was surveyed and laid out in 1882 and named after the Aboriginal term for the district which apparently meant 'magpie'.

* In 1884 the population was recorded as about 50. It served as a supply centre for local selectors.

* The Neilson family left for Nhill owing to drought in 1885.

* By 1887 there was a flour mill, two stores, a school, a mechanics' hall, an hotel and a blacksmith's. The only linkage to Nhill and Kaniva was by a desert track.

* A railway line to Natimuk was completed in 1894.

* By 1927 the railway line was extended to Carpolac.

* The novelist Gerard Murnane moved to the town in 2009.

* The town currently has a population of around 200.

There is a useful local website. Check out http://www.westwimmera.vic.gov.au/Discover/Goroke. 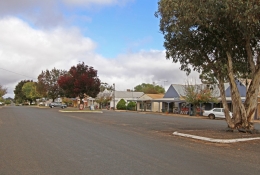 The wide main street of Goroke 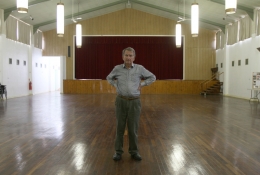 The writer, Gerald Murnane, in the Memorial Hall. 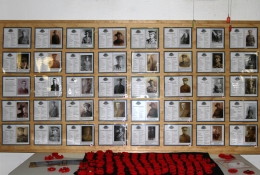 The town's Memorial Hall has photos of all the local men who went to the Great War. 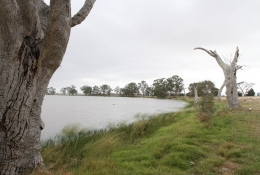 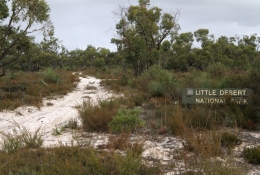 A 4WD track heads into the Little Desert National Park 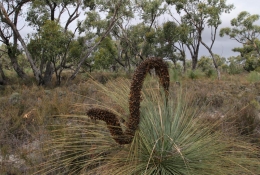 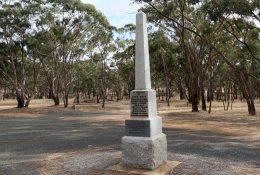 The memorial to Jane Duff east of Goroke