Historic railway town west of Brisbane where the local sawmill is still run on steam and sawdust.

Grandchester is a small village west of Brisbane which came into existence with the arrival of the railway, and the building of Grandchester Railway Station, in 1865. In more recent times it has become famous for the remarkable Grandchester Steam Timber Mill which, in an age of environmentalism, recycles its sawdust to drive the steam engine which cuts the timber. It has been operating since 1945.

Grandchester is located 73 km west of Brisbane and 34 km from Ipswich via the Rosewood-Laidley Road.

Originally Grandchester in Queensland was called Bigges Camp. Governor Sir George Ferguson Bowen, the first Governor of Queensland, renamed it Grandchester. It is claimed that Bowen disliked the name Bigges Camp, felt that it just needed to be elevated to something more impressive, and turned "Bigges" into "Grand" and "Camp" into the Latin for camp, "Chester".

Grandchester Railway Station
The Grandchester Railway Station dates from 1865 and, as such, is the oldest surviving railway station in Queensland. It can be viewed across the lagoon from Ipswich Street and accessed by the Grandchester-Mount Mort Road and School Road. The lagoon across from the railway station was used to supply water to the trains but it dried up during summer and consequently a more substantial dam was built on the hill near Long Gully Road.

Grandchester Sawmill
The Grandchester Sawmill began production in 1945 by Roley Gillam. It started producing timber for the Rosewood Coal Mines and firewood for Queensland Railways. It has always used a steam engine to power the sawmill. In the beginning Roley Gillam was using a Robey Portable steam engine. He changed to a Marshall Traction Engine and then to the Marshall Stationary Engine which he purchased in the late 1950s. The engine was made in England in 1908 and brought to Australia by Nestle who had it formally inspected in 1911. The miracle of the Grandchester Steam Sawmill is that the steam engine is fired with the sawdust produced by the mill. Thus the sawdust heats the water which drives the engine which cuts the timber producing sawdust which heats the water and so on. It is more environmentally friendly than either electricity of diesel. The mill was destroyed by fire in 2007 but it has been restored. Check out http://www.grandchestersawmill.com.au/history.html for details. For more information contact the mill at 0419 649 596 or (07) 5465 5264.

The mill can be inspected. It is just off Symes Road. There is a strict guideline: "Visitors are welcome to drive onto the premises for a closer look but for industrial safety and insurance reasons, they must remain in their vehicle."

Model Live Steam Railway
On the first Sunday of each month between 10.00 am - 3.00 pm working scale models of steam and diesel engines provide fun rides on a small track between the Rosewood-Laidley Road and Ipswich Street.

Grandchester & District: Then and Now
There is a useful Ipswich Heritage Trail brochure, available at the Ipswich Visitor Information Centre, which lists eleven places of historic interest in the area and another thirteen in the town.

* Prior to European settlement the district was occupied by Aboriginal people from the Yuggera language group.

* The first European into the Grandchester area was Allan Cunningham in May 1829. Cunningham's expedition camped beside what is now known as the Railway Lagoon while trying to reach the Brisbane River.

* A settlement grew up around Bigges Camp which was named after an early pastoralist, Frederick Bigges

* The railway from Ipswich reached Bigges Camp in 1865. The railway station was subsequently renamed Grandchester.

* In 1866 Cobb & Co coaches started meeting the train and carrying passengers up the hill to Toowoomba.

* In 2007 Grandchester Sawmill was burned down. It has subsequently been rebuilt.

The best information about the town can be accessed at http://www.grandchestersawmill.com.au/history.html. 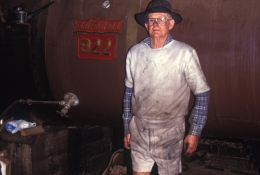 Roley Gillam standing beside Old Faithful in 1988 when I first saw the mill in operation. 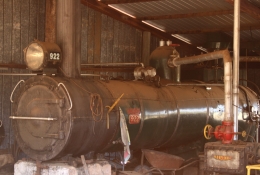 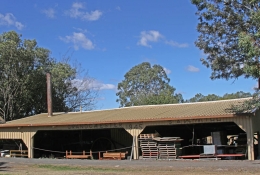 Destroyed by fire in 2007 but still operating with the original steam engine, the Grandchester Sawmill. An environmental wonder. 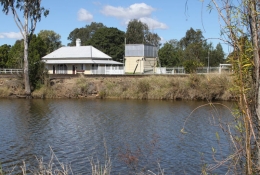 The historic railway station and the lagoon at Grandchester.