Small town on the eastern shore of Western Port

Grantville is a small town on the eastern shore of Westernport. It was once a supply port for the settlers in the adjacent hill country and a timber town with four sawmills linked by tramway to the local jetty. Today Grantville, with its small shopping centre and foreshore caravan park, is predominantly a retirement and holiday destination. The area around Grantville has over 54 species of native orchids and is popular with bushwalkers and visitors eager to escape Melbourne's suburbia.

Grantville is located 103 km south-east of Melbourne and 300 metres from the eastern shore of Western Port.

The settlement was probably named after Lieutenant James Grant who, in 1801, was the first European to travel through Bass Strait and who surveyed the coast between Wilsons Promontory and Western Port. There is another theory that it was named by the surveyor Edmund Colbert after James McPherson Grant, a politician and President of the Board of Land and Works in 1871-1872.

Maru Koala and Animal Park
Maru Koala and Animal Park, on the Bass Highway, specialises in Australian fauna which includes koalas, kangaroos and wallabies, dingoes, emus, parrots, wombats and crocodiles. There is an opportunity to hand-feed kangaroos and pat a koala. The Keeper Presentations include koalas, dingoes, reptiles and Tasmanian Devils. Other attractions include an animal nursery for children, Pirate Pete's 18 hole mini-golf, a sheep shearing display, a gallery selling local handicrafts, a gift shop and a bistro cafe.  It is open daily from 9.30 am to 5.00 pm, tel: (03) 5678 8548 or check out https://www.marukoalapark.com.au.

Grantville Foreshore Walk
Starting at Grantville Pier, there is a pleasant 700 metre coastal walking track which heads north along the Port Phillip shoreline. It crosses a bridge at Colbert Creek and passes through bushland adjacent to the Grantville Recreation Reserve. It has been estimated that over 300 bird species live in this area. Check out https://www.visitbasscoast.com.au/grantville-foreshore-walk for more information.

The Gurdies Nature Conservation Reserve
Located to the north-east of Grantville and covering 260 ha, this area of native vegetation, is ideal for bushwalking and mountain bike riding. The Gurdies Nature Conservation Reserve Visitor Guide is not specific about bushwalks but explains "For visitors who wish to go for a gentle stroll or stretch their legs, there is a seven minute walk from the Bass Highway car park. There are numerous other walking tracks of varying distances throughout the reserve and they are well signposted". This area was recognised as having significant flora and fauna values which led to it becoming a Flora and Fauna Reserve in 1992. A walk through the reserve can lead to sightings of Brushtail and Ringtail Possums, Sugar Gliders, Common Wombats, Eastern Grey Kangaroos, Crimson and Eastern Rosellas, wattlebirds, honeyeaters, wrens and swallows. The excellent Visitor Guide brochure (it can be downloaded at https://parkweb.vic.gov.au/__data/assets/pdf_file/0010/315649/Park-note-The-Gurdies-NCR.pdf) notes that "The vegetation in the reserve is predominantly eucalypts such as Messmate and Narrow-leaf Peppermint. Others include Blackwood, Silver Banksia, Prickly Tea-tree, She-oak and various sedges and grasses. Victoria’s floral emblem, the Common Heath, with its stunning pink and red bell-shaped flower, is also common throughout the reserve."

* Prior to the arrival of Europeans the area was home to the Bunurong Aboriginal people.

* Western Port was explored by George Bass and Matthew Flinders as early as 1798.

* In 1801 Lieutenant James Grant made the first-known east-bound passage through Bass Strait. The town is probably named after him.

* Governor Darling decided to forestall any prospective French plans by establishing a military and agricultural settlement at Western Port.

* By 1838 the area around Grantville was part of the Westaway pastoral run. It was not used commercially.

* By the 1870s timber cutters were in the area and timber mills were being built.

* By the late 1880s the settlement had a post office, hotel, school and a population of around 70.

* In 1884 a local Agricultural Show society was formed. The first Grantville Show was held the following year.

* A Mechanics Institute Hall was built in 1888.

* By 1890 the town's port was important for shipping goods to Melbourne.

* The arrival of the railway at Lang-Lang saw the importance of the port decline.

* Donmix, a ready made concrete factory, began operations in 1958.

* By the 1970s sand was being mined for use in ready-made concrete.

There is no dedicated Visitor Centre for Grantville.

There is no official website but the http://www.grantvillehistory.com.au has useful information about the town and its attractions. 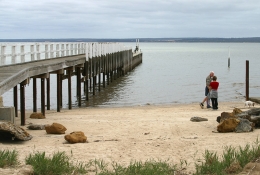 The jetty and beach at Grantville