Graytown is a gold mining ghost town lying on a connecting road between Heathcote and Nagambie. At its peak in 1868 it had an estimated population of 20,000. By the 1960s most of the buildings, and the local population, had been removed. Today it is nothing more than a reminder of a once thriving township.

Graytown is located 148 km north of Melbourne between Heathcote and Nagambie.

A township was surveyed in 1869 and named 'Moormbool'. It was subsequently named Graytown after Moses William Gray who was a parliamentarian for the local Rodney electorate between 1860-1864.

Mining Ruins
On the road between Heathcote and Nagambie there is now nothing more than some old shafts (some are over 150 metres deep), mullock heaps, poppet legs, the occasional fence post and brick chimneys. It is hard to imagine that once Graytown was once a thriving settlement with ninety hotels (most of them would have only been tents with beer cooling in wet straw out the back), several banks, two newspapers, a post office, a police station, courts, most religious denominations, a concert hall, a school, a variety of commercial stores and a cricket team.

The POW Camp
During World War II a prisoner-of-war camp. Approximately 250 Italian POWs and later German POW's were detained at Camp 6 Graytown POW Camp. The German POW's were mostly crew members from the German raider ship Kormoran which had sunk HMAS Sydney off the Western Australian coast. Some Finnish seamen were also held at Camp 6 Graytown. The prisoners returned to Europe on the Orontes in 1947. There is an exceptionally interesting history of the POW camp at http://livinginballan.blogspot.com.au/2014/01/graytown-and-pow-camp.html. It has excellent photographs and tells the story of the POWs.

* Prior to the arrival of Europeans the area was home to the Taungurong Aboriginal people.

* The alluvial gold rapidly disappeared and by late 1870 the population had declined to 150.

* In 1870 a flood swamped the mines and destroyed numerous buildings.

* In the Second World War a prisoner-of-war camp was set up with internees from a sunken German warship, the Kormoran.

* By 1960 most of the local buildings had been moved to other towns.

There is no visitor information centre in the town. The closest is the Heathcote Visitor Information Centre, cnr High and Barrack Street, Heathcote, tel: (03) 5433 3121.

There is useful historic information at Victorian Places. Check http://www.victorianplaces.com.au/graytown. 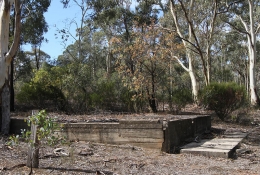 All that is left of Graytown - once a POW camp Ruins in the bush where once there were 90 hotels 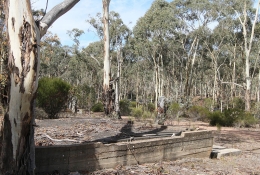 All that is left in the bush of Graytown