Charming town known for its timber, tin and lithium production

Greenbushes is a small historic town which is economically driven by a combination of mining, timber, tourism and farming. The main appeal of the town lies in its huge open cut mine which can be viewed from a lookout. There are also a number of interesting walks in the district and an impressive Discovery Centre where visitors can learn about the interesting and unusual history of the town.

Greenbushes is located 241 km south of Perth via National Highway 1.

This is a case of a name which is the bleeding obvious. When tin was discovered, the town that grew up was named Greenbushes because of green bushes (Oxylobium laceolatum) in the district which stood out from the grey of the local eucalypts.

Greenbushes: A Town of Discovery
Most of the places of interest in Greenbushes are located along Blackwood Road. There is an excellent map (see the photos) which lists 27 places of historic interest around the town. And, for those who are really keen, there is a downloadable map - the Heritage Amble - which lists a total of 77 places of interest (check out https://docs.wixstatic.com/ugd/a5ae0a_7f886961d2434035a6f8c69240540c2b.pdf). The more modest sign near the Lookout suggests that the following are worth inspecting:

Greenbushes Discovery Centre
Located at 38 Blackwood Road, the Greenbushes Discovery Centre is open from 10.00 am - 2.00 pm Wednesday, Friday, Saturday and Sunday. The centre tells the story of the town through a series of displays and experiences. Visitors can descend into a replica underground mine, listen to the sounds of a working mine, learn about the ecology of the local forests and the lives of the Nyoongar people, see exhibits relating to the timber industry, see native animals in the 'Land Dome' and learn the history of the town along an impressive time line.

Exploring the town's Information Boards
The town's history is recalled in a series of information boards which were placed around the town in 1988 to help visitors understand what the town was like when it was booming and successful. Each one tells part of the larger story of the town.
A typical example is No. 36 which appears outside the Anglican Church of St Barnabas: "The Anglican Church of St Barnabas was built in 1899. The first rector of the Church of England as it was called was the Reverend W J McClemans. Rev McClemans (who later founded the Christ Church Grammar School and became Canon McClemans) attended a meeting with Greenbushes parishioners at the Duke of York Hotel in 1899 to discuss the prospects of building a church for the congregation. Mr H Layman, a resident of the town and one time MLA for Nelson, assisted the congregation to obtain land "in the middle of town" on which to construct the new church. The church was built using local jarrah and the pews were hand made by the Rev R Davies who also made the lectern which is still in use today. A new "Bell Organ" was purchased for the Church in 1917 and the portable font was made with copper donated by Greenbushes Sunday School children in 1918. The Anglican church also established a new school at South Greenbushes in the boom years of the district in the early 1900s. Children from the age of nine were instructed by Mrs A Wilson." They are all worth exploring. A brochure is available at the Discovery Centre.

Heritage Park and Thomson Park
Located opposite the Greenbushes Discovery Centre on Blackwood Road, and the point where most of the walks around town start from, the Heritage Park has reminders of the town's industrial past with old steam boilers, a tin dredge and a replica mine head frame. Further up Blackwood Street is Thomson Park which is part of the town's Heritage precinct and includes the Old Court House and Gaol.

Cornwall Pit Mine Lookout
At the end of Telluride Street there is a short walk (it is disabled friendly) up to the Cornwall Pit Mine Lookout.
Mining At Greenbushes
There is an excellent sign at the lookout which overlooks the mine site. It explains that the Greenbushes operation is about extracting from the "diverse and unique pegmatite orebody with the final products being:
Tantalum Zone - Electronics: tantalum wire and capacitors; Metal Work: cutting bits and high temperature applications; Aerospace - aerospace structures, jet engines and gas turbine parts.
Lithium Zone - flat glass, ceramics, container glass, fibreglass, air conditioning systems, batteries, greases, rubber products, pharmaceuticals, aluminium alloy for aircraft.

Learning About Tantalum
Gizmodo on the web explains: "Tantalum's primary 21st Century use comes in the creation of capacitors. Tantalum capacitors have an extremely high capacitance packed in a small volume - perfect for shrinking our electronic devices, or making additional room in them for larger processors or speakers. Tantalum is found in cell phones, DVD players, laptops, hard drives, and the PS3 - essentially almost any piece of home or industrial electronic equipment. Tantalum is also used to create surface acoustic wave filters, devices used in cell phones and televisions to improve audio quality. The average cell phone has about 40 milligrams of tantalum inside - not a considerable amount, but one that adds up quickly thanks to the millions and millions of cell phones in use." Learn more at https://io9.gizmodo.com/tantalum-is-the-most-important-element-youve-never-hear-5906833.

Learning About Lithium
Talison Lithium, who mine at Greenbushes, have a long explanation of the importance of lithium at http://www.talisonlithium.com/about-talison/what-is-lithium-. Here is a summary (the longer version is at that web address):
"Lithium is the lightest of all metals. Lithium and its chemical compounds exhibit a broad range of beneficial properties including:
The highest electrochemical potential of all metals
An extremely high co-efficient of thermal expansion
Fluxing and catalytic characteristics
Acting as a viscosity modifier in glass melts
As a result, lithium is used in numerous applications which can be divided into two broad categories: chemical applications and technical applications.
The fastest growing (and second-largest) market for lithium globally is for use in batteries.
Talison Lithium produces a chemical-grade lithium concentrate which is ultimately used in lithium batteries.
The two main lithium battery types are:
Primary (non-rechargeable): including coin or cylindrical batteries used in calculators and digital cameras. Lithium batteries have a higher energy density compared to alkaline batteries, as well as low weight and a long shelf and operating life.
Secondary (rechargeable): key current applications for lithium batteries are in powering cell phones, laptops, other hand held electronic devices, power tools and large format batteries for electricity grid stabilisation.
A growing application for lithium batteries is as the power source for a wide range of electric vehicles including electric bikes / scooters, buses, taxis, trucks as well as passenger electric vehicles.
Lithium chemicals are also used in a variety of other applications including lubricants, aluminium smelting, air treatment, pharmaceuticals.
Talison Lithium produces a number of low iron lithium products suitable for technical applications. Currently, the largest global market for lithium is for use in glass and ceramics as well as induction cook tops and cookware.
There is an excellent video which is worth watching. It gives an insight into the revitalising of the old tin mines. Check out https://www.abc.net.au/news/2017-07-08/mining-wetlands:-abandoned-mine-pits-evolve-into/8691008?pfmredir=sm.

Walks around Greenbushes
For details and maps of all the walks check out https://www.greenbushes.com.au/walk-trails.

1. Heritage Amble
The Greenbushes Heritage Amble is a pleasant walk which offers an historic insight into Greenbushes from the lives of the Noongar people through to tin mines and timber industry. There are a staggering total of 77 sites around the centre of the town. Brochures are available from the Greenbushes Discovery Centre. For more information and the map check out https://docs.wixstatic.com/ugd/a5ae0a_7f886961d2434035a6f8c69240540c2b.pdf.

2. Bibbulmun Track
The Bibbulmun Track, which starts in Kalamunda in the north, goes for more than 1,000 km south to Albany, and passes near Greenbushes. There is one point near Hay Road (Balingup side of Greenbushes) and the other at Mt Jones (5km from Southhampton Road and Blackwood Camp). A 5 km section separates these connecting points. It is shared between the Greenbushes Loop and Bibbulmun Track. It is possible for walkers on the Bibbulmun Track to walk to Greenbushes.

3. Greenbushes Loop
The 15 km trail, which takes around 5 hours to complete, includes natural waterways, heritage mining sites, old growth forest and joins the Bibbulmun Track for 5 km and has a 5 km return into the centre of Greenbushes. The trail is marked by a triangular sign which features a red-tailed black cockatoo. There are many interpretative signs along the walk.

4. New Zealand Gully Walk
This is an easy 7 km walk trail (it takes around 3 hours) through the North Greenbushes area. The trail passes a number of old man-made lakes and impressive piles of large laterite rocks which have been winched out of the diggings. This trail is marked by a triangular badge featuring a long necked turtle.

5. Mining Heritage Walk
This 3 km walk (it takes around one hour) which starts at the Discovery Centre features an old mining tunnel and hand-dug shafts and trenches. The trail is marked by a triangular badge featuring a miner's safety hard hat and crossed pick and shovel. Check https://docs.wixstatic.com/ugd/a5ae0a_be7fdd1ef74c4c71b38296f03bb59d58.pdf for a downloadable map.

7. Waterbird Walk Trail
Starting at the Greenbushes Pool, the Waterbird Walk is 3.5 km long and will take around one hour during which time the walker learns about the flora, fauna and history of the area around Spring Gully and Schwenke’s Dam. The whole area is being developed as a wetland suitable for wading birds such as the endangered bittern species. It is part of a program to revitalise the old mine sites in the district.

* Prior to the arrival of Europeans the area was home to the Nyungar Aboriginal people.

* Tin was discovered in the district by a Mines Department surveyor in 1886.

* Greenbushes came into existence in 1888.

* The first company into the area was Bunbury Tin Mining and they were followed by a number of other smaller companies.

* A Post and Telegraph service to the town was established in 1891.

* In 1893 a world slump in the price of tin saw the local industry collapse.

* In 1898 the railway from Donnybrook to Bridgetown was opened. The Greenbushes station was located north of the town. That year saw freehold settlers selecting land in the district.

* By 1899 the town had a Police Station, Court House and St Barnabas Anglican Church.

* In 1900 the Greenbushes Road Board was proclaimed.

* In 1902 kerosene street lighting was installed.

* The local Roman Catholic Church and convent were consecrated in 1904.

* A census carried out in 1904 revealed that the town had 159 miners who were serviced by "9 storekeepers, 8 publicans, 2 tin smiths, 7 carpenters, solicitors, mining agents, chemists, butchers, tailors, bootmakers, bakers and a blacksmith".

* In 1910 the South Greenbushes School was opened.

* By 1913 the town's population had reached 2000. Of this population approximately one quarter were working in the timber industry.

* In 1917 the street lighting was changed from kerosene to gas lighting.

* In 1925 a Group Settlement scheme was established in the area.

* In 1928 the Greenbushes Timber Corporation moved to Palgarup.

* In 1933 electric street lighting was installed.

* In 1970 Greenbushes Shire amalgamated with Bridgetown.

* The South West Highway was rerouted in 1976 to allow mining of a rich tantalum lode.

* A Greenbushes mine, producing lithium concentrate, was opened in 1985.

* By 1997 the Discovery Centre had been established. 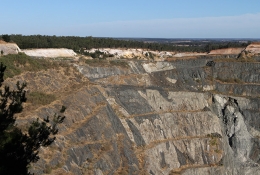 Cornwall Pit from the Mine Lookout 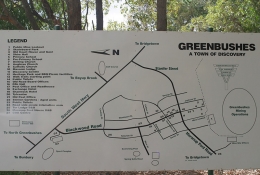 The Information Board listing the major places around the town 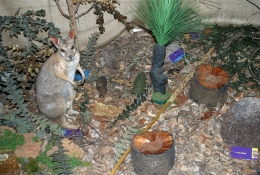 A marsupial in the Land Dome in the Discovery Centre 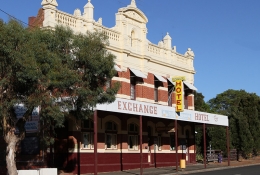 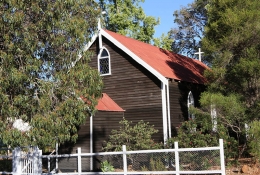 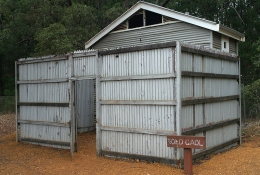 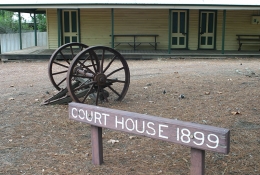