Town on the Darling Downs associated with Steele Rudd.

Greenmount is a small town in the heart of the Darling Downs which is known more for its associations with one of Australia's most famous nineteenth-century humorists than for any significant attractions. A visit to Greenmount is really a journey of homage to see the harsh and simple conditions that characterised Steele Rudd's childhood and to learn about the life of this remarkable writer.

Greenmount is located 152 km west of Brisbane via Toowoomba which is only 28 km north via the New England Highway.

Greenmount was originally known as Emu Creek. The name changed in 1871. For a time the railway siding was known as East and West Greenmount but it was officially shortened to Greenmount in 1879. The origin of the name was explained in an obituary of Mr. Donald Mackintosh, ex-M.L.A. for Pittsworth, which appeared in the Courier Mail 5th May 1932 . It noted that Mr Mackintosh "was born in Lochaber, Inverness, in the Highlands of Scotland, on May 16, 1840 ... arrived in Queensland at the age of 22, with no money, but with immense strength and a big heart. From Brisbane he tramped through Cunningham’s Gap to Warwick, where he obtained employment on a farm at a few shillings a week. He eventually selected land on the old Eton Vale station, and called it Greenmount, by which, the township is known to-day."

Steele Rudd's Shingle Hut
The replica of Steele Rudd's shingle hut is not located in Greenmount. To reach it drive along the New England Highway until you reach East Greenmount, turn east directly opposite Emu Creek School, and continue up the Greenmount Budgee Road for 2km. The shingle hut and a number of excellent signs and placards are easily located.  A plaque states: "This is the site of the boyhood home of Arthur Hoey Davis 'Steele Rudd' where he found inspiration to write On Our Selection and his other Australian classics."

Davis was born at Drayton near Toowoomba in 1868 and the family moved to this selection in 1875. He attended the Emu Creek school until he was 12 when he left to work as a station hand. Under the pseudonym Steele Rudd he started publishing stories in The Bulletin when he was 21. Around the same time this self-taught writer  started submitting humorous sketches about rowing to the Brisbane Chronicle. He signed these pieces Steele Rudder (a combination of the English essayist Richard Steele and the steering mechanism of a boat) a name which later became simply Steele Rudd. In 1899 a collection of his pieces from The Bulletin titled On Our Selection was published. In this collection he created the famous rustic characters of Dad and Dave. In total Davis wrote twenty-four books and six plays. As the boards at the hut observe: "The wry sense of humour and irony in Rudds works portray human resilience against nature, and settler resistance to government." Other boards explain the selection process and the building of the hut.

* Before the arrival of Europeans the area around Greenmount was inhabited by the Aboriginal Keinjan language group.

* The first Europeans to settle in the district were the McIntyres who arrived in the late 1860s and settled at Emu Creek, seven kilometres each of the present township.

* A major change occurred in 1868 when Land Act became law and the old, larger sheep and cattle runs were sold and small holdings, usually between 260-2000 hectare, were sold. This resulted in more intensive farming and settlement around Greenmount.

* The town's first shop was opened in 1876 by Violet Brodie, a widow whose maiden name had been Violet McIntyre - a descendant of the district's first European family.

* In 1877 a town site was surveyed and named West Greenmount. Two years later the name was reduced to Greenmount.

* Greenmount's economic success relied on the dairy industry. A cheese factory was established around 1893; between 1890-1920 it became a major producer of dairy products; and during World War II it provided milk products to US forces living in southern Queensland.

Greenmount does not have its own visitor information centre but the Toowoomba Visitor Information Centre on the corner of James and Kitchener Streets (tel: 1800 331 155) has useful information.

There is no local website for Greenmount. The University of Queensland's site is useful for detailed historic information. See http://queenslandplaces.com.au/greenmount 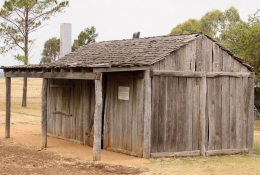