Village on the north-west edge of the Barossa Valley

Greenock is a small, charming historic village on the edge of the Barossa Valley which is notable for its tree-lined streets and shady peppercorn trees. The town is surrounded by vineyards and consequently there are numerous cellar doors.

Greenock is located 77 km from Adelaide via Gawler.

Historic Buildings
There was a major survey of the Barossa Valley towns in the 1980s and it observed that in Greenock: "the most important buildings are central to the village at the main intersection. The Post Office, Hotel and Institute buildings front the main street on prominent corner sites. The architecture is Victorian, the buildings of stone with rendered and white painted quoins and consistent detailing ... On slightly elevated land adjacent to the Institute a number of substantial dwellings are of note. A group of small scale verandahed stone cottages dwarfed by the pepper trees form part of the southern entry to the town."

Historical Walk of Greenock
Produced by the Greenock Heritage Group, the Historical Walk of Greenock identifies a total of 27 places of historic interest in the district. Check out https://www.barossa.com/uploads/486/historical-walk-of-greenock.pdf for both a map and detailed descriptions of the places of interest. These are the most interesting places listed on the walk:

1. War Memorial
Located on the corner of Murray Street and Kapunda Road this war memorial is unusual in that it was unveiled in 1956 and commemorates only those members of the local community who served during World War II and afterwards. The Greenock Institute has an honour roll for those who fought in World War I.

3. Laucke Feed Mill
Located on Mill Street, the modern Laucke Mill is an expansion of the original flour mill which was built by Thomas and Edward Barkey in 1858. The old section is the two storey part of the mill. The mill was purchased by Friedrich Laucke in 1899 and continued to operate until the 1940s. In 1959 it changed to milled stock feed production.

4. Wheat Store
Over the road from the Laucke Mill, and clearly marked "Wheat Store", is a simple building which was completed in the 1850s when local growers traded in cereal grain to millers, brewers and sold grain for export.

5. Telegraph Office
This modest building in Murray Street was built in 1866 and operated as the town's post office until 1879. It is clearly signposted outside as Greenock's Old Telegraph Station.

10. Commercial Bank
Located on the corner of Murray Street and Martin Street, (No.12) this modest house was built in 1885 as the offices, and managerial residence, of the Commercial Bank. The following year the Commercial Bank of SA was liquidated so it was a bank for only one year. Since then it has been a private residence.

12. The Original Institute Building
Located at 10 Murray Street this house was used as the Greenock Institute Library from 1883-1905. Note the double doors which were the entrance to the library and reading room.

15. Greenock Creek Tavern
Now known simply as The Greenock, the tavern has been licensed since 1856 and was run by the same family for over 140 years.

16. Greenock Institute
Located over the road from The Greenock and clearly marked "Institute", this building was opened in 1905 as a library and community hall. A supper room was added in 1925.

Vineyards
Wineries in the Area
In areas like the Greenock district, where there are a number of cellar doors, it is best to refer to the specific knowledge of the wine experts. The Barossa Australia website, an excellent site (check out https://www.barossa.com/visit/towns-and-villages/greenock), has extensive information about the wineries in the region. It provides maps to each of the wineries and a hot link to their specific websites. There is also a useful Iconic Winery Trail with recommendations and information which can be accessed at http://www.daytrippa.com.au/barossa-valley/full-guide/daytrip/4073.

* By 1839 both Mount Greenock and Greenock Range had appeared on local maps.

* The Lutheran town of Nain was settled three kilometres from Greenock in 1853.

* The first Methodist church was built in 1855.

* In 1858 three more subdivisions occurred in the area. That year also saw the building of Laucke Flour Mill by Thomas Victor and Edward Barkey.

* In 1861 the Zum Schmalen Weg Lutheran Church at Nain was dedicated.

* A section of land known as Greenock East was subdivided in 1865.

* In 1866 the town got its first telegraph station.

* The Greenock Primary School was completed in 1877.

* In 1884 E.E. Bachmann opened a hardware store in Murray Street.

* The Greenock Institute was opened in 1905.

* The Greenock Centenary Park was opened in 1936.

The local official site is located at https://www.barossa.com/visit/towns-and-villages/greenock. 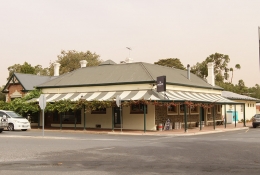 The Greenock Creek Tavern dates from 1856 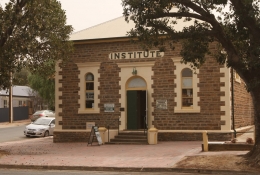 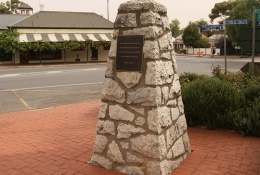 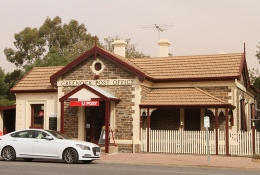 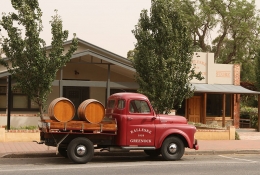 The Kalleske Cellar Door in the heart of Greenock 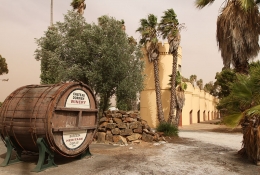 The winery at Chateau Dorrien