Two towns near the southern edge of the Barrington Tops National Park.

There is a slight complexity about Gresford. It is actually two towns. Gresford and East Gresford are two small settlements separated by 2 km. They are both small rural settlements in the Upper Hunter and their main attraction is their access, via Maitland, to the southern reaches of the Barrington Tops National Park.

Gresford and East Gresford are located 202 km and 205 km north of Sydney via the Pacific Highway. They are 41 km north of Maitland.

The first land grants were 'Camyr Allyn', issued to Charles Boydell (now Gresford) and 'Cawarra', made out to George Townshend (now East Gresford). Boydell's brother William took up 'Caergwrle' upon his arrival in Australia in 1836. These early settlers were Welsh. Charles Boydell and George Townshend were neighbours in Wales and came to Australia on the same ship. Gresford is named after a town on the Allyn River in North Wales.

St Anne's Anglican Church and Suspension Bridge
At the end of Church Street is the charming St Anne's Anglican Church. William Broughton, the first bishop of Australia and one of the most prominent clergyman in the early colonial history of Australia, is said to have held the first local Anglican service in a barn across the river. The current brick building was completed  in 1898-99. It is an Early English design with a fine wrought-iron gate. The churchyard is verdant with trees, roses and trimmed hedges with a seat nicely placed within a shady arbour. Some of the stained-glass windows were furnished by the Lindeman family of vineyard and wineries fame. The land was donated by the Townshends, one of the first families in the district. There is a haunting plaque on the gates which reads "In memory Trooper M.L.G. Grey Killed on active service 18 Feb, 1902" presumably a local who went to the Boer War.

Suspension Bridge
The church is adjacent a suspension bridge over the Paterson River. This was the site of the original ford across the river and was part of the road to Singleton. A pedestrian bridge was built in 1911. This suspension bridge, the third span and the first vehicular bridge, was proposed as early as 1936 but not built until the 1960s.

St Helen's Catholic Church, East Gresford
Located on Park Street at East Gresford, St Helen's Catholic Church and Cemetery (1867) is a Gothic Revival brick building on a stone foundation designed by Edmund Blacket. It has lancet-arched windows. The stained-glass was added in 1982. A rather unlikely story suggests that, during the consecration ceremony, the bushranger Captain Thunderbolt fired a gun.

Clevedon
Located at 2034 Gresford Road just south of East Gresford is Clevedon, an impressive building on land originally belonging to the pioneering Townshend family. Built in 1900 it is a late Victorian family home with original oak ceilings, veranda posts and cedar joinery.

St John's Church at Vacy
Located 13 km south of East Gresford, Vacy is a tiny hamlet with a church, a pub and a few houses. St John's Church (1887) is an attractive building on the roadside at the southern end of town. The second Anglican church (the first was erected in 1848) is constructed of locally-made bricks on land donated by Gilbert Cory.

Lostock Dam
Located 18 km north west of Gresford on the Paterson River Road is the Lostock Dam and Caravan Park. The land here was granted to John Phillip Weber in the 1830s. The dam, built in 1969, covers 220 ha, has a storage capacity of 20,200 megalitres, a maximum water depth of 30 m and draws on a catchment area of 280 square kilometres. The dam wall is 701 m long and 38 m high. Fishing and boating are permitted. For more information check out http://www.waternsw.com.au/supply/visit/lostock-dam.

Barrington Tops From East Gresford
The southern section of the  Barrington Tops National Park can be accessed from Gresford by travelling east towards Dungog and then heading north to Allynbrook and Eccleston. Beyond Eccleston the Allyn River Road continues on to Mt Allyn Lookout and Burraga Swamp.

Allynbrook
Allynbrook, located 12 km north of East Gresford, is nothing more than a locality 7.5 km north of the Camyr Allyn Bridge, which spans the Allyn River at the northern end of East Gresford. Adjacent to the main road, you will find, to the right, the homestead 'Caegwrle' (c.1844) and St Mary-on-Allyn Church, built in 1840. In the graveyard are the tombs of William and Mary Boydell. The two met aboard the ship which brought them to Australia in 1836. Mary was the daughter of Bishop Broughton who made it a condition of their marriage that Boydell build the home and church which he did on his land grant, one of the early ones in the district. St Mary's is a handsome church with a fine graveyard but what makes it very special is the well-kept churchyard and idyllic pastoral setting. It has an iron gateway with an old gas lamp. There are lancet-arched leadlight windows with timber tracery and a lancet-arched doorway topped by a gable with carved timber bargeboards. Caegwrle next door also has lancet arched windows and door. The public school adjacent dates back to 1881.

Eccleston
Located 22 km north of East Gresford and 10 km from Allynbrook, the road follows the course of the Allyn River, is particularly pretty and there are mountains all around. The tiny hamlet has Eccleston Public School and a Congregational Church, both were established in 1867. Just past them is a driveway on the left to another small timber church (St Paul's).

Mount Allyn Road to Mt Allyn Lookout and Burraga Swamp
The panoramic view from Mt Allyn Lookout (1143 m above sea-level) is one of the most impressive in the whole of the Barrington Tops National Park. The surrounding mountains appear bathed in a shimmering blue eucalypt haze. A walking track heads off and will join you up with the Burraga Swamp Walk which is a 2 km, 30 minute walk. The National Parks website explains: "Today, the delicate grasses and sedges of Burraga Swamp are in sharp contrast to the ancient rainforest of Antarctic beech around it. The organic matter left here over centuries is valuable historical evidence to help us understand and learn about past climate and vegetation. The walking track itself climbs gently through the beech forest, across a small saddle, and down to the southern edge of the swamp." For more detailed information and a useful map check out http://www.nationalparks.nsw.gov.au/things-to-do/walking-tracks/burraga-swamp-walking-track.

* Prior to European settlement the Gresford area was occupied by the Gringgai clan of the Wanaruah Aboriginal people.

* The first Europeans in the district were timber getters who began extracting cedar in the 1810s.

* When Paterson was settled in the 1820s exploration upriver began.

* The first grants were 'Camyr Allyn', issued to Charles Boydell (now Gresford) and 'Cawarra', made out to George Townshend (now East Gresford). Boydell's brother William took up 'Caergwrle' (just north at Allynbrook and pronounced 'Ca-girl-ee') upon his arrival in Australia in 1836. Charles Boydell and George Townshend were neighbours in Wales and came to Australia on the same ship.

They were assigned convict servants in proportion to the wealth they brought with them, with a view to 'developing' the land and establishing autonomous settlements. Tobacco, wheat, corn, grapes, citrus fruits and turnips were grown.

* Henry Lindeman, one of Australia's most famous winemakers, bought 'Cawarra' in 1842 and set up vineyards there in 1843.

* In 1911 a pedestrian bridge was built over the Paterson River.

* A vehicular suspension bridge was built over the Paterson River in the 1960s.

There is a useful local website. Check out http://www.gresfordnsw.com.au. 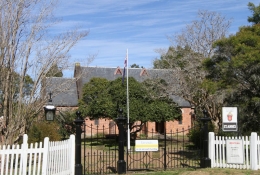 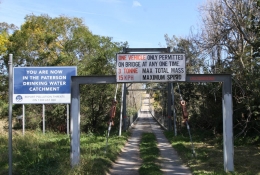 How brave are you? The suspension bridge over the Paterson River. 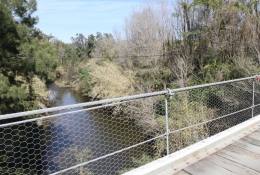 The Paterson River from the suspension bridge. 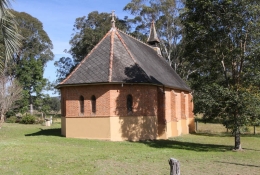