Historic mining town and migrant centre in the Hunter Valley.

Greta is a small straggling town on the New England Highway between Maitland and Singleton. It is notable for its large median strip (the town's High Street runs adjacent to the New England Highway) and an impressive collection of historic buildings which line the main road. They were obviously built as the town grew in importance both as a coal mining town and a travellers stopping point on the road to Singleton and the New England area.

Greta is located 183 km north of Sydney and 23 km north-west of Maitland. It is 55 m above sea-level.

When the town was surveyed in 1842 it was named Greta. It is assumed that the name came from a small river in Cumberland, England.

Historic Buildings
There are a number of interesting historic buildings on the southern side of the New England Highway between Wyndham Street and Nelson Street.

Tattersall's Hotel
Tattersall's Hotel is now the only hotel in town. During the 1870s the town had four hotels and the original Tattersalls was a timber building with iron lacework on the upper balcony. The current brick building was designed by James Warren Scobie of Maitland for the Castlemaine Brewing Company of Newcastle and constructed around 1910. There is a fascinating photo of the hotel in 1893 at https://www.flickr.com/photos/uon/3771456678.

Post Office
The Greta Post Office, with its intricate iron lacework on the upper balcony and its signage still indicating it is a post office, is now Bakers of Greta proudly announcing that it was "award winning pies and bread".

The Immigration Plaque
In the median strip, opposite the Post Office (Bakers of Greta) is a simple reminder of Greta's unique place in Australian history. A plaque, formally unveiled by the Minister for Immigration and Ethnic Affairs and placed in the park by the Cessnock City Council in 1994 reads: "In recognition of all the nationalities who lived and worked in the Greta Migrant Camp between 1949-1961. Their contribution to and enrichment of Australian life is remembered with pride and appreciation."

Council Chambers
The old Greta Council Chambers on the New England Highway date from 1912. They are currently used as the Greta Historical Museum and include exhibits which highlight the district's coal mining days, the army training camp and the migrant camp that was made at the end of World War II. The museum contains local historical records, a 19th-century photographic display and coal mining material. It is open on Wednesdays and Saturdays from 11.00 am - 3.00 pm. For more information tel: 0427 657 150 or check out https://mgnsw.org.au/organisations/greta-tidy-towns-historical-museum.

Court House
The town's dominant brick Court House was built c.1890 and is characterised by arched windows and slate gambrel roof. There is an arcaded veranda on three sides with a pediment over the entry. It is now used as a community hall. Next to the building, in Wyndham Street, is a simple bronze plaque recording the 36 men killed in the district's collieries between 1874 and 1964 and the one man - Norman Brown - shot by police during the Rothbury Riot (see Branxton for more details of the riot).

Wyndham Estate and Dalwood House
Located 9 km north of Greta, via Dalwood Road, is Wyndham Estate Winery - one of the most famous wineries in the Hunter Valley. George Wyndham, who founded Wyndham Estate Wines, purchased the estate in 1828 and built Dalwood House (he designed it himself) of sandstone which was brought from a quarry at Raymond Terrace by barge and bullock dray. Wyndham planted his first commercial shiraz vines around 1830. When they failed he replaced them with vines given to him by James Busby. Subsequently Wyndham's wines enjoyed international success and the vineyard became the second-largest in NSW. Dalwood House is now a National Trust property. The website explains: "Dalwood is an expansive single-storey stone house built in the Greek Revival style, reminiscent of the family home at Dinton, Wiltshire. It consists of a long central block facing south with a wing each end and two rear wings projecting northwards to form a courtyard.
"The central pavilion, facing the river, opened through symmetrically positioned paired French doors onto a beautiful diamond pattern flagstone veranda with a shingle roof supported by fine timber columns. A pair of monolithic Doric stone columns dominate the recessed porch of the eastern wing.
"The external walls feature dressed coursed stone. Finely detailed gable pediments and corbelled parapets conceal an early attempt at flat roof construction. The roofs were formed by a 15 centimetre layer of earth on timber slabs and water-proofed with a 3 to 5 cm topping mixture of lime, oxblood and tar. After failing, a shingle covered pitched roof was built, being replaced later with corrugated iron." For more information check out http://www.dalwood.org.au/dalwood-house.html.

Lochinvar
About 8 km south-east of Greta, along the New England highway, is Lochinvar. The land was granted in 1823 to Leslie Duguid, a founding director of the Commercial Bank of Sydney. A village was laid out in 1840 when Duguid sold up and a bridge over the Hunter was built in 1874.

Lochinvar House
Lochinvar House is located approximately 3 km west of Lochinvar township between Kaludah Creek and Allandale Road - it's address is 1204 New England Highway. It was built in 1840 by Leslie Duguid. Set on 88 acres (35 ha) overlooking the river, it has spacious rooms with 15 foot (4.5 m) high ceilings, an elaborate marble bathroom with a huge bath and a fine art collection on the walls. Wine grapes were grown here from 1840 and the ruins of the old cellar remain. Beside the house are the carved sandstone and kilned bricks produced by convict labour. It is now a bed-and-breakfast, tel: (02) 4930 7873 or check out http://www.lochinvarhouse.com for details.

Greta Army and Immigration Camp
The Greta Army Camp, comprising 2,930 acres (1190 ha) was located on the town's outskirts. It was opened in 1939 as a training ground for the 6th Division of the 2AIF - World War II soldier training. Over 60,000 Australian troops trained at the camp. In 1949 the camp was transferred to the Department of Immigration and it became one of Australia's largest migrant reception and training centres between June 1949 and January 1960 when migrants, particularly from Europe, were arriving in Australia in vast numbers. Over 100,000 migrants passed through the Greta Camp during the 11 years when it was in operation. The land was eventually sold at auction in 1980. There is nothing left of a place where over 160,000 soldiers and migrants lived.

* Prior to the arrival of Europeans the area was occupied by the Wanaruah Aboriginal people.

* Greta started as a small community around Anvil Creek in the 1830s.

* Coal mining commenced at Anvil Creek in 1862. That year the railway reached the town.

* Kerosene shale was discovered in 1864.

* Anvil Creek Coal Mine was established in 1874.

* By the end of the 1870s the town had four hotels, four churches, a school and School of Arts.

* The main Greta coal seam was discovered in 1886 by geologist, Edgeworth David.

* Ten collieries were in operation in the district by 1907.

* By 1949 the training camp had become a staging camp for migrants. Over 100,000 migrants passed through the centre.

* The last migrants left the Greta centre in 1960.

There is no Visitor Centre in Greta. The closest is Maitland Visitor Information Centre, Ministers Park, 258 New England Highway and High Street, tel: (02) 4931 2800. 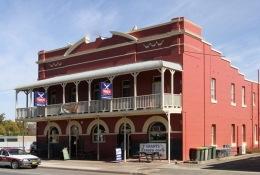 The old Tattersalls Hotel (1892) on the New England Highway. 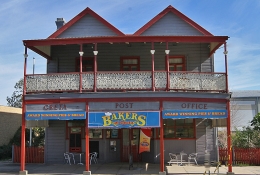 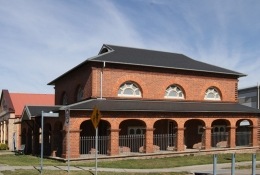 The unusual Court House (c.1890) on the New England Highway. 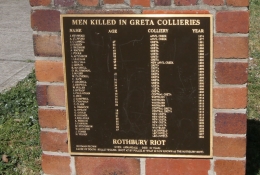 The simple bronze plaque beside the Court House recording the mining deaths in the district.