Guildford is an historic gold mining settlement located amidst low hills on the banks of the Loddon River. It has an attractive avenue of Plane trees planted in 1919 in honour of locals who fought in the First World War. It is today something of a dormitory town for those who work at Castlemaine. It has one hotel, a public hall, a gallery, a general store, a post office, bed and breakfast accommodation and two local vineyards. The surrounding area is predominantly sheep and cattle country.

Guildford is 126 km north-west of Melbourne between Castlemaine and Daylesford. It is 11 km south-east of Castlemaine.

The local Jaara Jaara Aborigines called the area 'Yarrayne'. When Major Mitchell passed through the area in 1836 he named the Loddon River after an English stream and probably named the town after Guildford in Surrey, England.

The Big Tree
The main reason for visiting Guildford is to admire 'The Big Tree' (Eucalyptus camaldulensis) at the intersection of Fryers Street and Ballaarat Street.
This beautifully preserved and healthy river red gum is thought to be the largest of its species in Victoria. The girth at the base is 12.8 metres and the height is 25.9 metres.
A plaque suggests that Burke and Wills camped beneath it on their journey from Melbourne to the Gulf of Carpentaria. Burke may well have been aware of the tree as he was superintendent of police in the Castlemaine district from 1858 to 1860 and would have been familiar with the terrain.

Commercial Hotel
The former Commercial Hotel (1865) is located at the corner of Fryers and Templeton Sts and it now serves as the Guildford general store. On its northern side are the stables and outbuildings of a large department store that burned down in 1916.

Family Hotel
The Delmenico's Family Hotel dates from 1856. The ruins of an old assembly hall stand nearby on its northern side. Next door is the very modest London House (1856) which originally served as a store and post office.

Marsh House
Located at 7254 Midland Highway, Marsh House is a prefabricated two-storey building which was imported from England and erected in 1854 for William Mein, the son of a pioneer European settler. It is listed on the Victorian Heritage Register which notes that "Old Marsh House is a two storey prefabricated house attributed to an English but unknown manufacturer and erected probably circa 1855 for William Mein. Rectangular in plan, the house is clad in five inch corrugated iron sheet laid vertically and there are cast iron angles at each corner and intermediate T-sections. The cavities are believed to be packed with brick. There are two front doors about a central column and cast iron door frames. Old Marsh House is a rare example of a two storey prefabricated dwelling, a particularly rare building type on a world basis. The prefabricated house is an important illustration of nineteenth century technological advance and is closely associated with the world-wide gold-rushes circa 1850 and with the industrial technology of the time. Old Marsh House is a building of considerable architectural importance, particularly as such a substantial prefabricated house. Old Marsh House has been variously altered over the years, both internally and externally. Intactness is however reasonable and condition is quite good." For more information check out http://vhd.heritagecouncil.vic.gov.au/places/69105/download-report. It is not easily seen from the road and it is a private home.

The Goldrush and the Chinese
The most substantial Chinese settlement on the Mount Alexander goldfields, estimated at 5,000 - 6,000 in the 1860s, was at Campbells Creek. Some historians believe it was the largest concentration of Chinese miners in Australia at the time. Hostility to the Chinese was overt and overwhelming and there were numerous local conflicts. Consequently the Chinese miners gathered together for safety.
The largest encampment was near the junction of Campbells Creek and the Loddon River at Guildford. Sadly no evidence of the camp remains today. At the time it was mostly calico tents along narrow thoroughfares dotted with Joss Houses, tea-houses, boarding houses, tailors, apothecaries, gambling establishments, opium dens, herbalists, barbers, theatres, even a circus. The Chinese worked, not as individuals, but in a type of co-operative which allowed them to engage in open-cut alluvial mining.

Yapeen
Located 2 km north of Guildford along the Midland Highway is the locality of Yapeen which was known as the Pennyweight Diggings in 1852. It later became Strathloddon, after William Campbell's 'Strathloddon' station, then Yapeen which is thought to be an Aboriginal place-name meaning 'green valley'. Chinese miners once camped in this valley. The ruins of an 1887 waterwheel can still be seen in Mopoke Gully.

* Prior to European settlement the area was occupied by the Jaara Jaara Aboriginal tribe who called the area 'Yarrayne'.

* The first known white men were the party of Major Mitchell during their 'Australia Felix' expedition of 1836.

* Pastoral runs were established in the district in the 1840s.

*  The settlement emerged in the 1850s when goldminers flooded into the area.

* A candle factory was established in 1855 and soap was manufactured from 1857.

* A school opened at Pennyweight Flat in 1858

* A school opened at Guildford in 1860. That year also saw a Post Office open.

* Guildford borough was proclaimed in 1866, there were just 250 ratepayers.

* Guildford also served as a coach depot for the likes of Cobb & Co for many years.

* Guildford became the administrative centre of the local shire in 1911.

* In 1919 an Avenue of Honour was planted to commemorate men who fought in World War I.

* Swiss-Italian families later took up residence in the area.

There is no visitor information in Guildford. Check out Castlemaine Visitor Information Centre, 44 Mostyn Street, tel: (03) 5471 1795.

There is no dedicated Guildford website. However the Monash University site - http://www.victorianplaces.com.au/guildford - does have useful historical information about the town. 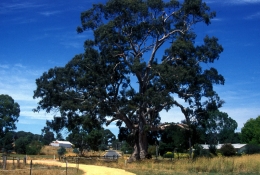 The Big Tree -reputedly the largest red gum in Victoria.