Quiet settlement on Pages River near Lake Glenbawn and the Hunter River.

Gundy is a tiny settlement on the Pages River. Realistically it is nothing more than a pub and a general store. The appeal lies in the area with its huge horse studs, its connections with famous families and high profile personalities, and its decidedly English ambience with rolling hills that are, most commonly, verdant and peaceful.

Gundy is located on the Pages River 292 km north of Sydney via Scone and the New England Highway. It is 19 km east of Scone.

There is some confusion over the name "gundy". Some sources argue that the first settler in the area, John Stewart, who surveyed the upper Hunter in the 1820s named his property 'Gundah Gundah' meaning 'a camping place' and that "gundy" is just a corruption of that. Others claim the township was named after a Mrs Gundy who kept an inn on the Waverley Road. Some sources claim it was known as Bellevue when it was first established as a stop for teamsters in the early 1860s. And to complicate matters further there is a belief that "gundy" is an Aboriginal word meaning either "trees", "frog" or "place of stringy bark".

The Scenic Drive
Gundy Road heads east off the New England highway at the southern end of Scone. This is a drive through delightful, verdant countryside and past some of the finest horse studs in the country. The road passes turnoffs to Lake Glenbawn, Arrowfield horse stud and Bellerive Stud. It is an area of extraordinary beauty and opulence. At 16 km the road crosses the Pages River and enters the tiny village of Gundy which now is little more than two churches and a hotel.

Gundy
As you enter the town from the south there is a bridge across the Pages River. Just before it is a dilapidated old Catholic Church of unknown vintage. The property of Bellevue, which gave its name to the village, lies behind the church. The homestead (c.1872) is a couple of hundred yards off the road on private property.

Linga Longa Inn
Located at 2 Riley Street, just past the bridge, is the Linga Longa Inn which is popular with the locals (it is the only hotel in town) and the people who work on the surrounding horse studs. It is located on the Pages River and has extensive gardens which are ideal for summer drinks. Over the road is a small park with a sign indicating the places in the area.

Gundy General Store
Rebecca Melville, who owns the store with Nicholas Thornton, writes: "We trade all day every day (bar Christmas and Boxing Days) and are known for our good honest burgers and excellent Genovese coffee, among other offerings. Our most common request is for 'the Gundy' a sandwich made from our own recipe corned beef, truss tomatoes and mustard pickles. The store is also the last fuel stop before Barrington Tops, we sell both unleaded petrol and diesel. The store has also developed a reputation for selling quality second hand goods, books, and bric a brac, with the occasional antique on offer."

Elmswood and the home of Phillip Adams
A few kilometres north of Gundy is a sign reading 'Elmswood American Saddlebreds'. Miranee Road heads off to the left across the Pages River. Just on the other side, to the right, is a two-storey brick house with bay windows owned by columnist and radio broadcaster, Phillip Adams.

Belltrees
Located 16 km east of Gundy on the Scone-Nundle Road is a turnoff on the right to Belltrees (established 1831), a 9,000 ha (22,000 acre) horse, sheep and cattle property and a superb example of an elegant colonial country seat. It was built on land granted to Hamilton Sempill who became the manager of the Segenhoe property in 1830. He named Belltrees after the English estate of an ancestor. When Sempill returned to England the property was taken over by the explorer W.C. Wentworth who sold the property in 1853 to the sons of James White of the Edinglassie estate at Muswellbrook. By 1912 it covered 160,000 acres (64,750 ha), was enclosed by 3,200 km of fencing and incorporated 64 buildings. Nobel-Prize-winning novelist Patrick White used Belltrees, which his parents owned, as the inspiration for Kudjeri in his novel The Eye of the Storm (1973). The property is still owned, run and occupied by the White family who raise Belltrees Black Angus cattle and polo ponies. Today the property, reduced to 9,000 ha (22,000 acres), is open to the public as an exclusive holiday resort although accommodation is restricted to three cottages, a country house and a mountain retreat. The main house is not available.

Entering the estate off Gundy Road a dirt drive leads past a number of outbuildings. To the left, set back from the road, is the gracious, 52-room, two-storey brick homestead, which was built in 1907 by Henry White. It features a fine cast-iron veranda on the upper floor, projecting gables from the front roof section, elegant columns, shuttered windows, Edwardian furniture and an impressive staircase. Today it is home to Dr Judy White and visits to the home are part of the organised property tour.

The outbuildings include the White Cottage, built of sandstock brick by convicts for Hamilton Sempill in 1831 or 1832; the original homestead (1836) which now serves as a museum; a slab trading store (1836); the historic Belltrees Public School (1879); the manager's house and post office (both 1901); the handsome brick St James Chapel (1887); and a fine 36-stand shearing shed which is known to have employed over 100 men in 1901. The Shearing Shed was designed by distinguished colonial architect J. Horbury Hunt and built in 1879. It features a pair of shears for a weather-vane which is located on top of one of the towers. At its peak in the 1920s some 180,000 sheep were being shorn on the property and the wool exported to England.

Accommodation for the general public has been available since 1988. It is available in the Georgian-style country house (2 bedrooms with en suites) and in two self-contained cottages, the White Cottage and the Mitchell Cottage. The property's website - http://www.belltrees.com - has details of the home, accommodation and tours. Tours of the property are only available for groups, tel: (02) 6546 1123 for details.

Lake Glenbawn State Park
Located off the Gundy Road at Segenhoe east of Scone (turn right onto Glenbawn Road from Gundy Road, go straight ahead at the cross intersection (Brushy Hill Road) turn left onto Bushy Hill Road, your destination is on the left), the Lake Glenbawn State Park which is a popular haunt for bushwalkers, birdwatchers (there are more than 100 birds that have been sighted in the park), anglers and  those interested in canoeing, sailing, swimming, water skiing and wind surfing. For more details check out http://www.lakeglenbawn.com.au.

Moonan Flat
The main attraction in Moonan Flat, amusingly, is the pedestrian suspension bridge which, according to local rumour, was built so the locals could get to the Victoria Hotel even when the river was in flood and the road was blocked. It was built in 1901 and the first person to use it was the local publican. Moonan Flat is a peaceful little village on the Hunter River and ringed around by the Mount Royal Range. The township grew to serve the goldminers of the Denison diggings in the 1870s. It was initially proclaimed as Macqueen but known locally as Moonan. There has been a Victoria Hotel in the village since 1872. The present building dates from about 1890 while the tin building behind the pine tree is an old bunkhouse which was built in 1860. It was originally associated with a set of stables  used by the Cobb & Co coach service which travelled through the town.

Ellerston and the Packers
The single road forks at Moonan Flat and Pages Creek Road heads north-east through the Packer family's Ellerston property which started as an outstation for the Belltrees property. Packer bought the 30,000 ha property in 1972 and subsequently had golfer, Greg Norman, design a golf course which is now considered to be one of the best in Australia. Kerry Packer died in 2005 and is buried near the property's polo fields. In 2015 it was announced that the Packer family were selling part of the property to Crown Resorts (which is partly owned by James Packer) for $60 million. To provide some idea of the scale of the property the sheep and beef side would remain in private hands. Crown Resorts were purchasing the accommodation, a go-cart track, a cinema, several swimming pools and the golf course.

* Prior to the arrival of Europeans the area around the Page and Hunter Rivers was occupied by the Geaweagal Aborigines.

* The first land grant near present-day Gundy was made out in 1826 to John Stewart who worked at Thomas MacQueens' Segenhoe property and who surveyed the upper Hunter in the 1820s.

* The township was named after a Mrs Gundy who kept an inn on the Waverley Road to the north-east.

* In 1842 Ludwig Leichhardt tested his bush skills in the hills behind Belltrees.

* The village of Gundy was known as Bellevue, after the nearby property, when it came into existence in the early 1860s as a service centre for miners.

* Gold was discovered at Stewarts Brook (named after John Stewart) and Moonan Brook in the 1860s.

* In 1867 Captain Thunderbolt held up a store at Moonan Brook and the pub at Denison.

* By 1881 the population had risen to 60 and the village had a school, post office and a couple of stores.

* The Victoria Hotel at Moonan Flat was built in 1890.

* The countryside was used as a setting for The Shiralee in 1957. 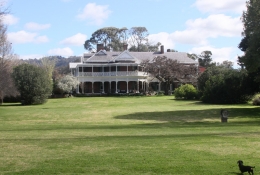 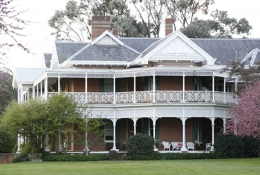 The 52-room mansion at Belltrees. 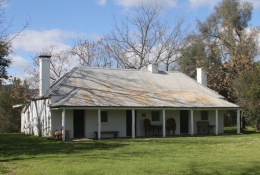 Semphill's Cottage (1832) on the Belltrees property. 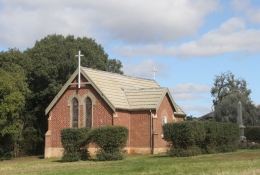 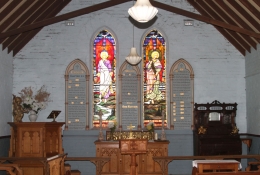 The interior and stained glass windows of the St James Chapel (1887) at Belltrees. 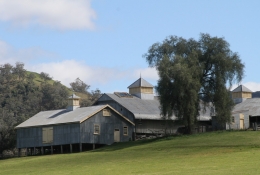 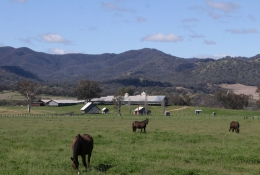 The rich pastures at Belltrees with the shearing shed in the background. 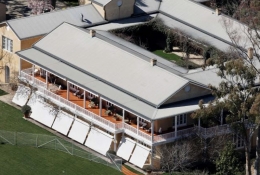 The house that Kerry Packer built at Ellerston 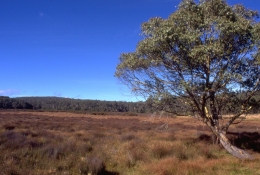 The wild country at Barrington Tops beyond Gundy on the road to Gloucester.