Town in an agriculturally rich region which inspired Dorothea Mackellar's poem, My Country.

Gunnedah is a middle-sized New South Wales country town which lies on a ridge above the Namoi and Mooki Rivers.  It is an important service centre in an agriculturally rich area known for its beef cattle, pigs, poultry, sheep, wheat, lucerne, barley, cotton, canola, sunflowers, oats, corn and sorghum. The associated industry includes the second-largest beef-cattle sales yards in the state, one of the state's largest coal seams yielding 10 million tonnes per annum, an abattoir, a brickworks, livestock feed companies, a flour mill and saw mill. The district is also recognised as home to the largest koala colony in inland New South Wales. The town's most famous resident was the poet Dorothea MacKellar (1885-1968) who lived on a local property from 1905 until the late 1930s. Her poem 'My Country', now an iconic expression of love of Australia, is thought to have been inspired by the local countryside.

Gunnedah Is located 429 km north-west of Sydney via the Pacific Motorway, New England  and Kamilaroi Highways.  It is 264 m above sea-level.

Gunnedah is named after the Gunn-e-darr people of the Kamilaroi Aboriginal language group who occupied the district prior to European settlement. It has been suggested that, apart from being the name of the local group, the word also means 'the place of white stones'.

Dorothea Mackellar Memorial
There are only four or five patriotic poems that are universally loved, known and recited and at the top of that list has to be Dorothea Mackellar's My Country. Everyone can recite "I love a sunburnt country / A land of sweeping plains". Few probably realise that it is the second verse of a poem which eulogises the Australian landscape after articulating an image of the English countryside. Not surprisingly the poem was written in England and is a simple expression of homesickness for the Australian landscape.

For years Gunnedah described itself as the "Town of My Country". Amusingly it now calls itself "Koala Capital of the World".

Dorothea Mackellar (1885-1968) is featured in a life-size bronze statue in South Street opposite the Visitor Information Centre. Mackellar lived on a local property from 1905 until the late 1930s. The "life size statue in bronze was erected by the people of Australia, the children of NSW and the local community in 1983. The 'Talking Rock' nearby tells the story behind the memorial and features her [Mackellar's] voice reciting 'My Country'".

Gunnedah Water Tower Museum
Located on the Oxley Highway at the western end of Gunnedah is the Water Tower Museum which claims to have "one of the largest collections of early agriculture and transport memorabilia." The museum's collection includes tractors, steam engines, farm machinery, horse drawn vehicles, guns, mining machinery and there is a timber workshop and a foundry. The complex was the town's first reservoir and was built in 1908 and operated until the 1950s. Check out http://www.gunnedahmuseums.org.au/gunnedah-rural-museum/ or tel: (02) 6742 4690.

Koala Capital
In the heirarcy of intelligent tourist attractions it is hard to fault the local Landcare and the Gunnedah Shire Council. They have planted tree corridors and encouraged koalas so that visitors have a reasonable expectation of seeing at least one koala in the wild. There is even a sign opposite the Visitor Information Centre which informs visitors "Koala In Tree Today". The success of the koala program has been greatly helped by an abundant local supply of the eucalypts the animals like (they are very fussy eaters). The best locations to see a koala are the Tourist Caravan Park, the grounds of St Xavier's School and the local TAFE, the Bindea Walking Track, the Gunnedah Golf Course and the track along Stock Road.

Red Chief Memorial
Outside the NSW Government Offices at 35-37 Abbott Street is a bronze relief statue known as "The Red Chief Memorial". It is a memorial to the Aboriginal warrior, Cumbo Gunnerah, who, when Europeans arrived in the area, was the leader of the Gunn-e-darr people; a subgroup of the Kamilaroi. It is known that Cumbo Gunnerah was buried near this site. He was sitting against a tree which became known as 'The Blackfellow's Tree'. The local Kamilaroi carved the tree with totemic designs in his honour. Subsequently the remains were exhumed and removed to the Australian Museum in Sydney. Little was known of Cumbo Gunnerah until King Bungaree, the last Gunn-e-darr full-blood, told Stan Ewing, the local police sergeant, about Gunnerah's life. In the 1950s Gunnerah achieved fame when he became the subject of the book The Red Chief (1953) by Ion Idriess.

Trails Around Town
Bindea Walking Track
The Bindea Walking Track is a 22-km walk which can broken into five sectors: (1) Koala Area - where is it possible to see koalas, (2) Kangaroo Viewing Point where, in the early morning and late afternoon, it is possible to see Eastern Grey Kangaroos and Wallaroos, (3) Avards Lookout which offers views across the Breeza Plains (4) Porcupine Reserve and Porcupine Lookout with views across Gunnedah. There is a map at - http://www.visitgunnedah.com.au/index.php/en/site-downloads/download?path=General/Official%20Gunnedah%20Visitor%20Guide%202013.pdf which is downloadable.

Poets Drive
This is a drive around the town past 16 plaques with poems dealing specifically rural life. The poets featured are eclectic - there are four poems by Banjo Paterson and one each by Les Murray, Henry Lawson, John O'Brien, Henry Kendall and lesser figures. As a tourist attraction it is original and the "grand finale" of a toilet block featuring poems etched on the toilet doors and a recitation on a permanent loop, is amusing and unusual. There is a map in the downloadable brochure which is also available at the Visitor Information Centre.

Town Tour
This is a 36-stop self-drive, signposted town tour which is remarkably comprehensive. It starts at the corner of Conadilly and Abbott Streets and includes the Dorothea Mackellar Memorial Statue, the Gunnedah Water Tower Museum, the Stock Road koala community, Porcupine Lookout, the Pensioners Hill Lookout and Heritage Sculptures, and the Eighth Division Memorial Avenue which is lined with 45 flowering gums honouring those who died in World War I. There is a map in the downloadable brochure which is also available at the Visitor Information Centre.

Lake Keepit State Park
Lake Keepit State Park lies 35 km east of Gunnedah via the Oxley Highway and Lake Keepit Dam Road. It is popular for sailing, boating, fishing, gliding, and bushwalking. There are barbecues, a kiosk, toilets and tennis courts. For further information on the Park check out http://lakekeepit.com.au.

Meridian Rest Area
Located on the 150° meridian, 27.5 km west on the Oxley Highway, is a rest area. The significance of this stop beside the highway is that the 150° meridian was adopted in 1895 as the basis of the Eastern Australian Standard Time, which is ten hours ahead of Greenwich Mean Time. There is an information board, a sundial and picnic facilities.

* Prior to European settlement the Gunn-e-darr people of the Kamilaroi language group lived in the area.

* The first European to reach the area was Alan Cunningham who passed through in 1827 on his expedition to the Darling Downs.

* In 1831 Major Thomas Mitchell journeyed through the area and a couple of years later a small settlement developed to provide services for teamsters who used the location as a suitable place to cross the Namoi River.

* The first European settler was John Johnston who, around 1833, established the Bulomin run on the Namoi River. He built a homestead and woolshed near the river.

* For the next thirty years the area was known simply as 'The Woolshed'.

* In 1854 the town was surveyed and three years later the first land sales took place.

* Around 1860 the settlement was later renamed 'Gunnedah'.

* In 1866 the bushranger Fred Ward, known as 'Thunderbolt', held up the Carroll Hotel and subsequently held a party in the pub which was broken up when a party of mounted troopers arrived. A gun battle followed but Ward escaped.

* In 1884 Cohen's Bridge was built across the Namoi River.

* The town was officially recognised as a municipality in 1885. At the time the population was around 1000.

* The Gunnedah Colliery was established in 1900.

* Today over 400,000 ha around the town yield an annual income of over $150 million. The Gunnedah Salesyard sells over 145,000 cattle per annum and the coal production in the area exceeds 10 million tonnes each year.

There is a good local website. Check out http://www.visitgunnedah.com.au/ for information about accommodation and eating in the town. 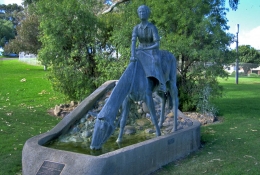 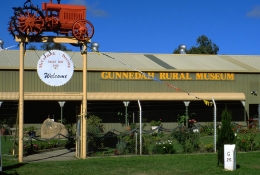 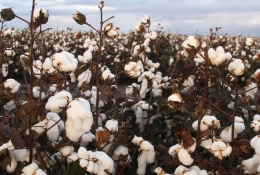