Town bypassed by the Hume Highway and now a quiet retreat.

Gunning is a small rural town which was, for decades, a victim of the Hume Highway which ran down the main street. Every truck, indeed every vehicle, travelling between Sydney and Melbourne roared and rumbled through the town. Today it is a delightful, chic small town bypassed by the highway which means that the historic buildings in the main street - the court house, post office, Caxton House - can all be admired as visitors promenade down a wide street with little traffic.

Gunning is located 244 km south-west of Sydney and 47 km west of Goulburn. It is situated just off the Hume Highway and is 580 m above sea-level.

It has been claimed that Gunning is a word, either in the Gundungurra and Ngunawal language, meaning 'swamp mahogany'.

Historic Gunning
There are a number of interesting historic buildings in Gunning. While many can only be viewed from the outside they still offer a pleasant and informative walk around the town.

(2) Pye Cottage
Located in Yass Street (the main street in town) is Pye Cottage (c.1860), a slab hut which was originally erected at Dalton (11 km to the north-west) and moved to Gunning in 1979. It is now a museum and can be opened by arrangement. There are three telephone numbers on the door for enquiries.

(4) The Court House
Located prominently in Yass Street is the court house (1879). To the rear is a gaol keeper's residence (1872). A little further down the town's main street is the Telegraph Hotel built in the 1880s with the second storey added in 1916.

(5) Caxton House
Further along Yass Street are Caxton House and Caxton Cottage (1850). They were originally the one building.

(6) London House
London House (1881) is a fine brick building with arched coach entrance which has served as both general store and hotel.

(7) Cemetery
At the end of Wombat Street is the cemetery which contains the vault (near the entrance) of John Kennedy Hume who was shot and killed by the Whitton gang while attempting to help those being bailed up at the local store in 1840. The tomb was erected by his brother, the explorer Hamilton Hume.

(8) Police Barracks
On the corner of Wombat Street and Biala Street is the town's oldest surviving building, the former police barracks (now a private residence), erected c.1842, which have two cells at ground level.

This is not a definitive list of buildings but is a pleasant walk around the town which will take probably no more than 45 minutes and give the visitor a feel for this town's early history.

* Prior to the arrival of Europeans the area around Gunning was inhabited by groups of Aborigines from the Gundungurra and Ngunawal language groups. It has been suggested that the Pajong 'Fish River Tribe' also lived in the area as well.

* The first Europeans onto the Goulburn Plains were Hamilton Hume and James Meehan who crossed the plains in 1818.

* Prior to 1820 the area around Gunning was the "limit of settlement" and settlers were banned from the district.

*  Hume (after whom the Hume Highway is named) established a sheep property near Gunning as early as 1821.

* In 1824 Hume departed from his property Yass with William Hovell on the hugely important expedition which explored the land between Yass and Port Phillip Bay. A column by the roadside at Fish River, 5 km east of Gunning, marks their starting point.

* Plans for a town were officially approved in 1838. Land sales in the area began that year.

* In 1840 Hamilton Hume's brother, John Kennedy Hume, who also owned a property at Fish River, was shot dead by members of the Whitton gang while he was trying to help people who had been bailed up at Cooper's Store.

* The railway arrived in 1875 and Gunning was a rail terminus for over fifty years.

* In 1901 Gunning was described as "a prosperous town supplying the needs of travellers, villagers and the surrounding rural community." It had five pubs at the time.

* In 1993 the Hume Highway bypassed the town creating a new and more interesting historic settlement. 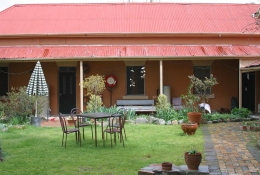 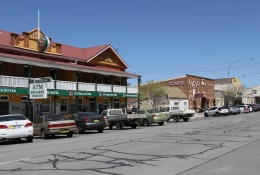 The main street of Gunning with the Telegraph Hotel and the Merino Cafe. 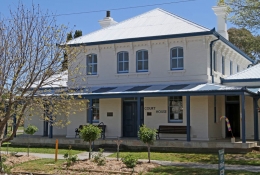 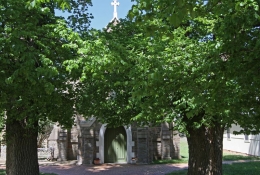 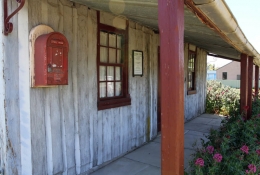