Rural service town famed for its potatoes and fat lambs.

Located at 1330 metres above sea-level, Guyra is the highest town of the New England Tablelands and as such has a reputation for coldness and snow in the winter months. It is the coldest, northernmost town in the country. The town is primarily a service centre for the surrounding wool, beef, potato and fat lamb-producing properties and it celebrates this economic base with a sculpture which combines a sheep with potatoes - it is located on the New England Highway - and an annual Guyra Lamb and Potato Festival. The town sits on the watershed of the Great Dividing Range with rivers and creeks to the east flowing down to the Pacific Ocean and rivers to the west heading towards the Murray-Darling basin and South Australia.

Guyra is located 509 km north of Sydney via Stroud and Walcha, 551 km via Muswellbrook and Tamworth, and 425 km south-west of Brisbane via Warwick and Glen Innes.

It is accepted that "Guyra" was the name given to an early property in the district and that the word came from the local Anaiwan First Nation peoples and meant either "fishing place" or "white cockatoo".

Mother of Ducks Lagoon Nature Reserve
Located to the south-west of Guyra (drive along Bradley Street and turn west on McKie Drive) the Mother of Ducks Lagoon is a freshwater swamp at the western edge of town. It is, in fact, part of a volcanic crater with a circumference of 14 km. The lagoon is a breeding and feeding habitat for waterbirds such as the common greenshanks, white-throated needletails, eastern swamp hen, black swan, Japanese snipe (which travels between the lagoon and Japan), black duck, straw-necked ibis and grass whistling duck. There is an excellent birdwatching platform at the eastern edge of the lagoon. For more information check out http://www.nationalparks.nsw.gov.au/visit-a-park/parks/Mother-of-Ducks-Lagoon-Nature-Reserve/Visitor-Info.

Baxter's Farm Museum
Located 34 km west of Guyra (Head west on the Tingha - Inverell Road and  after 18 km turn on to the Tenterden Road then, after 10 km turn right on to the Moredun Dams Road (gravel) and it is another 5 km) Baxter's Farm Museum has a large and diverse array of historic items. There are domestic items, farm machinery, a bottle collection, arts and crafts all set in charming gardens. It is by appointment only, tel: (02) 6779 4535.

Little Llangothlin Nature Reserve
Located 10 km north of Guyra is a tiny village of Llangothlin. 5 km further north is Tubbamurra Road which leads to Little Llangothlin Nature Reserve, a 257 ha reserve which includes Little Llangothlin lagoon and Billy Bung lagoon. Both are high altitude wetlands which have been listed with the Ramsar Convention because they are ideal for birdwatchers and nature lovers. There is an easy 5 km walking circuit around the main lake which is home to waterbirds and bush birds, particularly rosellas. There is a downloadable sheet at http://www.nationalparks.nsw.gov.au/visit-a-park/parks/Little-Llangothlin-Nature-Reserve/Visitor-Info#Maps-and-downloads. It includes a useful map and a comprehensive list of the birds that can be found on the lagoons.

* Prior to European settlement the area was occupied by the Anaiwan First Nation peoples.

* Peter McIntyre is said to have occupied the land around the townsite in 1836.

* Ollera', north-west of town, was selected in 1838 by George and John Everett.

* The first church in Guyra was consecrated in 1876.

* The town did not start growing until the Great Northern Railway arrived in 1883.

* There was extensive mining in the area by the end of the 19th century.

* Dairying had become a major economic activity by the end of the 19th century but potatoes proved a more enduring staple as they thrived on the rich, red soils.

* In 1960 the town achieved national attention when a local boy, Steven Walls, was lost for four days. This led to the largest search in Australian history and a hugely successful song "Little Boy Lost" by Johnny Ashcroft.

The town's Tourism and Commerce Association has a useful website. Check out http://www.guyraonline.com.au. 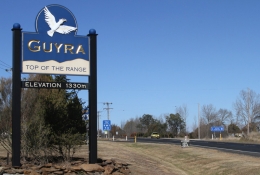 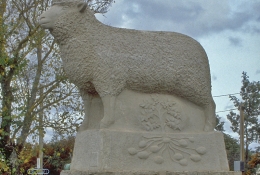 The sculpture of the fat lamb and potatoes on the New England Highway. 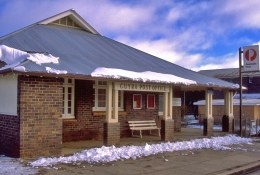 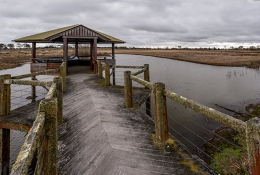 The birdwatching hut at Mother of Ducks lagoon.