Since the Sons of Gwalia mine closed down in 1963 and the population departed, the town of Gwalia has gone through a number of metamorphoses. At one point the cottages were being demolished when a committee, recognising the historic importance of the town, decided it was necessary to preserve this part of Western Australia's history. At another point, when the price of gold rose, the mines were re-opened and, mercifully, the company Sons of Gwalia NL, could see the importance and provided money to create a museum and restore some of the buildings. Today it is a fascinating opportunity to explore an historic mining town and to learn about one of the most successful gold mines in Australia.

Gwalia is located 4 km from Leonora, 235 km north of Kalgoorlie and 829 km north-east of Perth.

Gwalia is the Welsh name for Wales. The town was named after the famous mine which was established in 1896 and called the Sons of Gwalia and Sons of Gwalia was named by Thomas Tobias to honour his Welsh heritage.

The Buildings of Historic Gwalia
There are a total of 31 buildings and places of interest in Gwalia. Your first stop should be the Gwalia Museum where you can get a map of the entire town (it can also be downloaded at http://www.gwalia.org.au/map/?PHPSESSID=5ee66c2d8b6c027004ab570b24619dc2 and there is an app for both smart phones and tablets) which lists and identifies all the interesting buildings.

Those of particular interest include:

Mazza's Store in Tower Street - a large corrugated iron building which was, for most of the town's life, the all-purpose General Store.

Patroni's Guest House in Tower Street - a corrugated iron building (how hot must it have become in summer), which was a popular eating and living quarters for miners particularly those who had emigrated from Italy and Yugoslavia.

Little Pink Camp in Kane Street - an interesting example of the urgency and temporary nature of houses in mining towns. It was literally made out of any materials available. It has newspapers on the walls, a simple plank floor, and three small rooms. It was moved to its current site in 1988.

State Hotel on the corner of Kane and Station Streets - this gracious hotel was built by the Western Australian government in 1903 at a cost of £6000. The hotel has pressed metal ceilings and some particularly beautiful internal joinery on the staircase and around the bars. In 1919 the hotel was subjected to the state's first beer strike. "Fifty residents voted for a Beer Strike and vowed not to return to the hotel until their conditions were met. They had carefully compiled a list of complaints, including some relating to the brand of beer offered, the price, size and cleanliness of the glasses, and the behaviour of the manager whom they insisted should be dismissed." It closed its doors in 1964. It is now privately owned and not open for inspection.

Midland Woodline Steam Engine (over the road from the hotel) -  initially nicknamed 'Ken' (the first letters of Kluge, Edquist and Newman who were directors of the Sons of Gwalia) it was used to transport wood to fire the steam engines at the mines. It was renamed Midland which is where it was built.

Art's Place - a typical miner's cottage with gables and clad in corrugated iron.

Mine Manager's House (1897) - a substantial three bedroom dwelling built from local timber, bricks and iron which was probably the residence of Herbert Hoover during his stay in the town although there is evidence that while he arranged for the building he had been transferred to China by the time it was completed. It cost £750 which caused some concern in the company's head office. Now the Hoover House B&B. Check out http://www.leonora.wa.gov.au/hoover-house-bed-and-breakfast.aspx and http://www.gwalia.org.au/hoover-house/accommodation/?PHPSESSID=5ee66c2d8b6c027004ab570b24619dc2. It can be booked.

Headframe and Winder near the Museum - these impressive structures were built in for the original Sons of Gwalia mine. It was moved to its present location in 1987. The Headframe is reputedly "the only surviving large timber incline headframe in Australia and one of the very few timber headframes of any size from the 19th century still in existence worldwide." It was built between 1896 and 1898. "The 1912 Fraser and Chalmers winder is the largest of its type in Australia and one of only three remaining in the world."

Gwalia Museum
Located in the old Assay Office (turn left at the end of Tower Street) which was commissioned in 1897 by Herbert Hoover, the Gwalia Museum has extensive displays relating to the history of the town. Of particular interest are a small collection of Aboriginal spears and boomerangs from the area as well as pieces of equipment used in the mines, wheelbarrows, a corrugated iron washboard, crockery from the State Hotel, the mangle from Mrs Petroni's boarding house and miner's carbide lamps. The museum is open from 9.00 am - 4.00 pm daily, tel: (08) 9037 7122. Check http://www.gwalia.org.au/museum/opening-hours/?PHPSESSID=5ee66c2d8b6c027004ab570b24619dc2 for entry fees.

Open Cut Mine Lookout
Today Herbert Hoover's house overlooks the Open Cut Mine. Everyone who pays to enter the Gwalia Museum can walk across to an impressive lookout which offers a panoramic view over the current open cut operation. It is worth noting that the Gwalia Mine, which is now owned by St Barbara Ltd, is a combination of this huge hole - known as the Hoover Decline - and underground mining which, by June 2011 was 1,360 m below the surface. It produces gold at the rate of 8.9 grams per tonne. Since its establishment in 1897 the mine has produced over 4 million ounces of gold. It is estimated that it currently has a reserve of 2 million ounces. See http://www.stbarbara.com.au/our-operations/leonora/ for more details.

* In April, 1869 the explorer John Forrest passed through the area looking for the lost explorer, Ludwig Leichhardt. He named Mount Leonora on 20 June, 1869.

* In 1895 a prospector named Booden found alluvial gold in a gully about 37 km north-west of the present site of Leonora.

* In May, 1896 the Sons of Gwalia reef was discovered by prospectors named Jack Carlson, Frank White and A. Glendinning. They were financed by Thomas and Ernest Tobias who were storekeepers in Coolgardie.

* On 1 May, 1898 Herbert Hoover, later to become President of the United States, was appointed General Manager of the Sons of Gwalia.

* In 1901 residential house blocks were surveyed in the town.

* In 1904 the Assistant Government Geologist, C.F.V. Jackson carried out a geological survey of the area.

* In 1921 half the mine was destroyed by fire. Most of the 400 workers were laid off and the mill and gas power station were replaced.

* In 1940 with the involvement of Italy in World War II the Italians working at the mine were interned.

* The town literally died overnight on 27 December, 1963 when the mine closed down. The population of around 1700 was reduced to 40 people by 17 January, 1964 and the Gwalia Hotel closed.

* By 2005 Sons of Gwalia NL was in receivership. The assets were purchased by St Barbara Ltd who are still mining for gold underground. 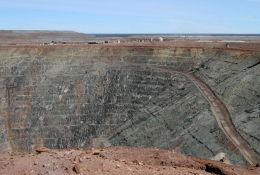 The view of the open cut pit from Herbert Hoover's house. I needed to stitch six images together to achieve the panorama at the top of the page. 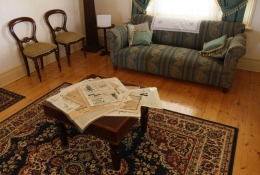 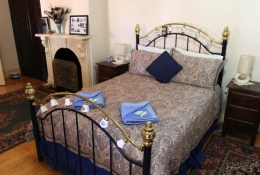 The bedroom in the Herbert Hoover B&B 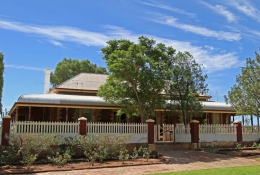 Herbert Hoover's house - a far cry from the tin shacks the miner's lived in. 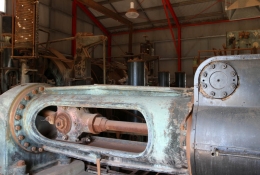 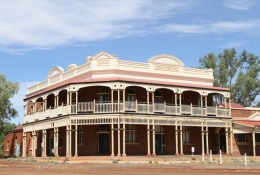 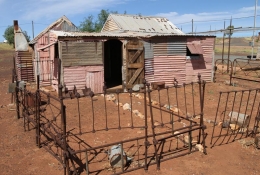 The little Pink Camp, one of the remaining Miner's Huts at Gwalia. 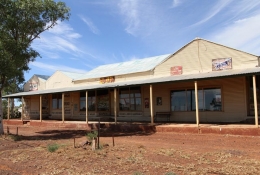