Gympie is an unusual town. Located on the Mary River it is primarily a service centre for the surrounding agricultural district which is known for its tropical fruit (pineapples, macadamia nuts), vegetables, dairy industry, beef cattle and piggeries. The town is decidedly exotic in the way meanders beside the Bruce Highway. Coming from the south if you head off on Brisbane Road (once the main road through town) you will drive for kilometres up hills and down valleys never being quite sure where the main street is - and, indeed, whether the town actually has a main street. It does: Mary Street is the centre of the town and is noted for its shady trees and broad shopping boulevarde. The town's primary attraction is the Gympie Muster, a country music festival which is now as important in the country music calendar as the festival at Tamworth.

Gympie, which is 95 m above sea level, is located 169 km north of Brisbane via the Bruce Highway.

It is now widely accepted that Gympie, officially named in 1868, is a local Aboriginal word - "gimpi gimpi" - for a stinging tree. There was a time prior to 1868 when the town was known as Nashville after James Nash who discovered gold and "saved Queensland".

The Town That Saved Queensland
'The Town that saved Queensland' sounds like hyperbole but, in reality, it is quite accurate. Queensland had become a state in 1859. By 1867 it was less than a decade old and was facing bankruptcy. The Bank of Queensland had closed. Unemployed men were wandering the streets of Brisbane desperate for work. The government was so financially straitened it had been forced to stop work on the Ipswich-Toowoomba railway which had only reached Grandchester. In a desperate attempt to raise additional funds the government offered a £3000 reward to anyone who found gold.
Fortuitously James Nash discovered gold near the present site of Gympie. Overnight the wealth from the goldfield led to Queensland's first goldrush and single-handedly saved the state.
The story of Nash's discovery is wonderfully quirky. Nash was so poor that he literally had nothing more than a dog, a pick and a panning dish. When his pick broke he walked to Maryborough where, with an ounce of gold which he had panned, he bought rations and some more equipment. He returned to the Gympie area, went up a dry creek bed and within a week had 75 ounces of gold which he sold in Brisbane for £200. He registered his find and the rush was on.
Tales of the early months in Gympie are typical of a gold-crazed mining town. One observer noted, "Every night it was brawls and fights. Often you would not know which fight to look at first: the cause in nearly every case was beer and barmaids."
Although the government failed to pay Nash the £3000 - they only paid him £1000 - he and his brothers did manage to extract £7000 worth of gold from the field.
The hysteria that followed Nash's discovery is neatly captured in a poem by George Essex Evans who was the District Register in Gympie during the goldrush.
Red Creek Rush was not a duffer
Far from that.
Even the most benighted buffer
Struck it fat.
For the wash with gold was teeming
And the strings of men came streaming.

So the town really did save the economy of Queensland. It is worth noting that by 1868 there were 25,000 miners in the Gympie area and the Gympie field went on to produce 99 million grams of gold worth a total of £14,538,328.
An amusing postscript: The town was briefly named Nashville. Given that it is now Queensland's home of country music, maybe it should still be called Nashville.

Gympie Gold Mining and Historical Museum
The Gold and Mining Museum, complete with Andrew Fisher's House, is set in 5 ha and includes 18 buildings including the home of Andrew Fisher, a local resident who became Australia's second prime minister and the first one to come from Queensland.

Located at 215 Brisbane Rd it is an excellent folk museum which includes an old Gaol House, a school, railway buildings, a church and a slab hut all acquired in the local area. From the road the stands out because of its huge reproduction of a mine head frame and gantry.

One of the museum's highlights is the Retort House of the Scottish Gympie Gold Mines which, remarkably, is the only mining building still standing in Gympie. It is listed by the National Trust. Some of the goldmining equipment is fired up on 'steaming days'.

Andrew Fisher's House will be of particular interest to those curious about Australian political history. Fisher was Australia's first Labor Minister for Trade and Customs. He later became the first Prime Minister to come from Queensland. He was Prime Minister three times in the years leading up to World War I and is credited with the famous declaration of Australia defending the British Empire to her "last man and last shilling". A quaint expression of British Empire loyalty.

It is recommended that visitors who want to see the whole site should allocate at least two hours for an inspection. The complex is open daily from 9.00 am to 3.00 pm. For further details tel: (07) 5482 3995 and check out http://www.gympiegoldmuseum.com.au/museum.

Lake Alford Park and The Statue to the Gold Diggers
Lying just below the Gold Mining and Historical Museum, Lake Alford Park is a delightful park for a picnic, for bird watching (expect to see finches, honeyeaters, cockatoos, parrots, ducks and swans) and for reminding everyone of the town's importance to the state. The Statue to the Gold Diggers is a large monument recalling the vital role gold played in the evolution of the town and its importance to Queensland. It was designed and sculptured by Herman Husman and installed in 1976. The statue is set on a tripod which "characterises the underground gold mining".

The Valley Rattler
The Mary Valley Rattler is an opportunity to rediscover a bygone era and experience the rich history of Queensland’s heritage rail travel. Hop on board the steam locomotives for a scenic journey through the Mary Valley from Gympie to Amamoor, with the Classic Rattler Run departing Wednesdays, Saturdays and Sundays (+ Fridays come September 2019). Since reopening in October 2018, the Mary Valley Rattler operates not only as a heritage train journey, but offers an extensive heritage museum and a café experience with the Platform No.1 Café, open 7 days. For timetables and ticket check out www.maryvalleyrattler.com.au

Gympie Region Heritage Trails
There is a Welcome to the Heritage City of Gympie brochure with a map which lists 24 buildings of historic interest in Gympie as well as a suitable place for fossicking on Deep Creek. It can be accessed at http://www.gympieheritagetrails.com.au/. The most significant building in the city is the Gympie Court House, which was designed by the Queensland government architect and built between 1900-1902 at a cost of £6000. Other buildings of interest include the Stock Exchange Building (1888), the Bank of NSW (1890), the Lands Office Building (1873) and the Queensland National Bank (1877).

It is an important museum containing a large selection of pioneering hand tools used in timber getting and saw milling, bullock wagons used in the early timber industry, a blacksmith's shop, a replica of a timber cutter's hut, a working replica of an 1860s steam-driven bush sawmill, a 1925 Republic truck used to winch logs, and a cross section of a kauri pine that was 619 years old which was logged in north Queensland in 1939. At certain times there are displays of pit sawing and cross cut sawing there is a timber cutters bark hut, a shelter shed with shingle roof, a blacksmith's shop and a steam driven saw mill. It is open from 10.00 am - 4.00 pm Monday to Saturday. Tel: (07) 5483 7691. Check out http://www.woodworksmuseum.com.au for more details.

Woondum National Park
Located 16 km south-east of Gympie, Woondum National Park is an area of rainforst and eucalypts which has a number of good walking tracks ranging from the 500m Turpentine circuit to the difficult 3.2 km Boulder Mountain hiking trail. For more information check out http://www.nprsr.qld.gov.au/parks/woondum/about.html.

* Prior to European settlement the district was occupied by the Gubbi Gubbi people.

* By the 1840s European graziers had established sheep properties in the area. John Daniel McTaggart established the Kilkivan selection 50 km west of Gympie around this time.

* In 1867 James Nash, the son of an English farm labourer who had migrated to Sydney in 1857, discovered gold near the Mary River. Nash announced his find on 16 October 1867 and it resulted in "one of the wildest rushes in Queensland history".

* It was officially named Gympie in 1868. Previously it had been known as Gympie Creek.

* The first flood of the Mary River during European settlement occurred in 1870.

* The town was proclaimed a municipality in 1880.

* In 1891 the rail line connected Gympie to Brisbane.

* Gympie was officially declared a town in 1903.

* The gold mining eventually closed in 1925. By that time the city was an important regional centre for the surrounding rich agricultural district.

The city's official site - http://www.gympie.qld.gov.au - is primarily for local citizens but it does have valuable information for the visitor if you are prepared to dig around. 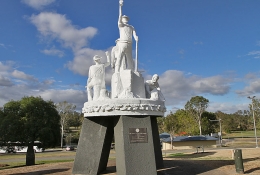 The Statue to the Gold Diggers (1976) by Herman Husman 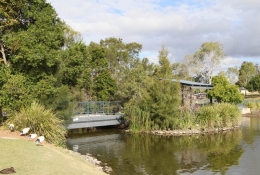 Lake Alford Park in front of the Gympie Historical Museum. 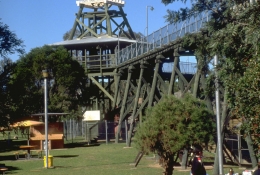 The South Great Eastern mine headframe and gantry at the Gympie Gold Mining and Historical Museum. (pic 1990) 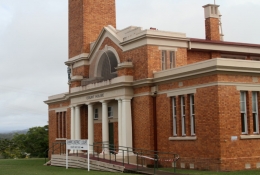 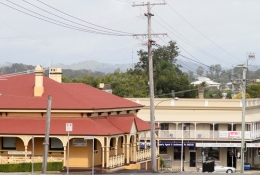 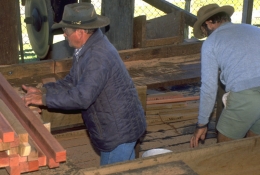