Hadspen is now considered a commuter suburb of Launceston. This is a little unfair as historically it had a separate identity and, now that it has been by-passed, the main street has rediscovered its nineteenth century ambience with the buildings, from the Church of the Good Shepherd to the Red Feather Inn, being a reminder of the town's historic roots. A small bonus is the rich history of the village of Carrick located 6 km further west along the Meander Valley Highway.

Hadspen is located 12 km south-west of Launceston via the Bass Highway and Meander Valley Highway.

Hadspen was originally known as Reibey's Ford. It was named some time before 1836. The name is believed to have been given to the settlement by the surveyor, George Frankland, who came from Somerset in England where there was an estate named Hadspen.

Entally House
The story of the Reibey family is one of the great success stories of early Australia. From convict to owner of one of Tasmania's most impressive Georgian houses in one generation and, by the second generation, from convict to Premier of Tasmania, is an achievement which tells the story of the way many convicts saw transportation as the possibility to start a new life. Thomas Reibey, who built Entally House, was the eldest of three sons of Mary Reibey. His son, Thomas Reibey III,  was Premier of Tasmania from 1876-1877.
Mary Reibey was a truly remarkable woman. Here's a brief account of her life (a more detailed account can be had on the Australian Dictionary of Biography website (it is the best source) - http://adb.anu.edu.au/biography/reibey-mary-2583): "Mary Reibey was born on 12 May 1777 in Bury, Lancashire, England. She was convicted of horse stealing at Stafford on 21 July 1790 and sentenced to be transported for seven years. When arrested she was dressed as a boy and went under the name of James Burrow, but at her trial her identity was disclosed … She arrived in Sydney in the Royal Admiral in October 1792 and was assigned as a nursemaid in the household of Major Francis Grose. On 7 September 1794 she married in Sydney Thomas Reibey, a young Irishman in the service of the East India Co., whom she had met in the transport and who had returned to Sydney in the Britannia that year. Thomas Reibey appears to have been the first free settler outside the military ring to trade … he established himself near the waterside in what is now Macquarie Place and turned his former association with the East India Co. to advantage by importing general merchandise. He named his trading establishment Entally House, after a suburb in Calcutta … On the death of her husband [in 1811] and his partner Edward Wills a month later, Mary Reibey was left with seven children and in entire control of numerous business concerns. She was a hotel-keeper, and already had had experience in assisting her husband and managing his interests when he was absent on voyages … In the eyes of her contemporaries Mary Reibey gradually rose to respectability and affluence in the new emancipist society. She was a favourite of Governor Lachlan Macquarie. She opened a new warehouse in George Street in 1812 and continued to manage her husband's ships and extended her operations by buying the John Palmer and in 1817 the brig Governor Macquarie. In 1816 she advertised for sale all her property, which included seven farms on the Hawkesbury, with the intention of returning to England. She was then said to be worth about £20,000 … Mary Reibey, persevering and enterprising in everything she undertook, became legendary in the colony as the successful businesswoman. She took an interest in the church, education and works of charity … On her retirement she lived in the suburb of Newtown until her death on 30 May 1855 … Thomas and Mary Reibey's three sons, who founded the Tasmanian branch of the family, all followed their parents' lead in mercantile and shipping ventures. The eldest son, Thomas (b. 6 May 1796), went to sea with his father and in November 1822 became a partner of his brother as a general merchant and commission agent at Launceston, trading under the name of Thomas Reibey & Co. He died at his estate, Entally, Hadspen, near Launceston, on 3 October 1842."
Entally House was originally opened to the public by the National Trust in 1948. It is an impressive collection of buildings which includes "Australia's oldest conservatory, chapel, stables, carriage house and farmhouse". The Tasmanian National Parks & Wildlife Service now manages the estate which is open Thursday - Monday 10:00 am - 4:00 pm (Closed every Tuesday & Wednesday) at 782 Meander Valley Road, Hadspen, tel: (03) 6393 6201. Check https://www.entally.com.au/house for more details.

Red Feather Inn
The Red Feather Inn, 42 Main Road, Hadspen was built in 1844. The inn, built for the local police magistrate Charles Arthur, was one of the first coaching inns in Van Diemen's Land. It has retained its colonial atmosphere but currently operates as a "live.eat.love.stay" wedding venue, cooking school, accommodation and restaurant destination. Check out http://www.redfeatherinn.com.au.

The streetscape here is significant as the single-storey cottages at 46-52 Main Road date from the 1840s and early 1850s and are a comment on how Hadspen was growing as an important regional centre.

The Church of the Good Shepherd
What a wonderfully colourful story? It took over 100 years from conception to completion for this modest and charming church to be built. There are a number of stories but basically Thomas Reibey, who clearly saw himself as the local lord of the manor, arranged for the plans for the church to be drawn up in London. The plan was to construct a church similar to St Marys Church in Lutterworth, England with blue ironstone walls, a 12 metre tower and a 7 metre spire. It was to be known, at least by the locals, as the Reibey Church. A foundation stone was laid in 1868 with Reibey planning to pay for the construction. Then all hell broke loose. One story claims the local bishop, having discovered that Reibey had a sexual preference for young boys, refused to accept the 'tainted' funds for the construction of the church. Another claims that Reibey was having a dalliance with a married woman and her husband complained to the bishop and the synod. Whatever the truth the problem was sexual, the church hesitated, Reibey sued for libel, and work on the church stopped in 1870. Over the years Anglican services were held in a wooden church next to the partially  completed Church of the Good Shepherd. Finally the original plans were found, new plans following the original plans were drawn up, and in 1957 work started on the ruins with a view to completing the church. It was finally consecrated in 1961.

Carrick
Located 6 km west of Hadspen down the Meander Valley Highway is the village of Carrick with fifteen listed Tasmanian Heritage Register buildings. Of those (and it is sensible to just wander along the Meander Valley Highway through the village) there are five Georgian and Victorian buildings of particular note:
Old Mill House (Monds Roller Mill)
The Old Mill House is a four-level, three-storey bluestone mill built around 1846 by John Kinder Archer. It was operational until 1924 and was Tasmania's last operational water powered flour mill.
Hawthorn Villa
Located the corner of the Meander Valley Highway and Church Street, 'Hawthorn Villa' is an attractive Victorian house (1875) in the Gothic Revival style set in English-style gardens (the croquet lawn has been retained) with two huge Californian redwoods. It is a National Trust and National Estate listed property with accommodation being offered in the stables. Hawthorn Villa was built by Thomas Wilke Monds who owned the flour mill next door. For more detailed information check out http://www.hawthornvilla.com.au/
Prince of Wales Hotel
The Prince of Wales Hotel (built in 1840 and now used as a private home) was the birthplace and home of Sir William Robert Rolph who became the proprietor of the Launceston Examiner.
Old Watchhouse
Opposite the Prince of Wales Hotel, and now a private home, the Old Watchhouse is a wonderful example of Georgian simplicity. It was built by convicts in 1837.
Plough Inn
The Plough Inn (1841) is an attractive two-storey brick inn which is now a private dwelling.

* In 1819 Entally House was built on the South Esk River.

* By 1831 there were a number of houses forming a settlement which is known as Hadspen.

* The Red Feather Inn was opened for business in 1844. A number of cottages were built nearby in the next few years. A bridge across the South Esk River known as Reibey's Bridge was constructed and a blacksmith set up business in the village.

* By 1845 there was a Church of England school operating in the town.

* In 1866 Hadspen was officially declared a town.

* The plans for the Church of the Good Shepherd are drawn up. The foundation stone was laid in 1868.

* In 1874 a Wesleyan chapel was consecrated.

* In 1961 the Church of the Good Shepherd was finally completed 93 years after the foundation stone was laid.

* In 2005 the town's historic nature changed when 13 ha of land on the edge of the town was zoned for urban development.

Entally House has its own website - http://entally.com.au and the Meander Valley Council has a short entry at http://www.meander.tas.gov.au/page.aspx?u=494 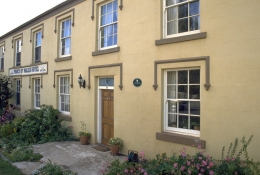 The Prince of Wales Hotel in Carrick, built by convicts in 1840. 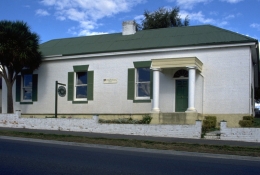 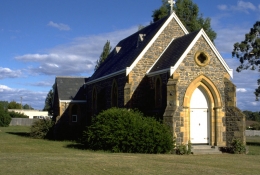 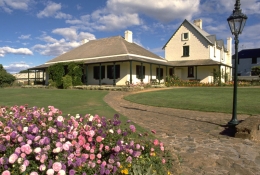