Historic goldmining town on the way to the Mt Hotham ski fields.

On first impression the visitor will ask "Is Harrietville really a town?" The visitor drives along the Great Alpine Road heading towards the Mount Hotham ski fields and passes along a beautiful road edged with deciduous trees without feeling they are entering a town. Harrietville, like so many mining towns, is a settlement that once stretched for miles along a valley. Today it is a sprawling, almost disconnected, town where visitors can explore the early history of the district in Pioneer Park, go bushwalking and, if they feel lucky, can try their luck panning for gold in the Ovens River.

Harrietville is located 351 km north-east of Melbourne via the Hume Highway and the Great Alpine Road.

It is widely accepted that the first non-Aboriginal baby born in the area was named Harriet and the settlement was duly named Harriet's Vale which was subsequently shortened and changed to Harrietville.

Recalling the Goldrush Past
Pioneer Park, on the Great Alpine Road, has a number of items which will give the visitor a good introduction to the history of this historic gold mining town. There are interesting placards with photographs recalling the Junction Dredge pontoon which was launched in 1919, a puddling and sluicing plant established in the 1980s, a gold battery which was installed in 1906, the Rose, Thistle and Shamrock plant and the Tronoh Harrietville Dredge. There is a very detailed sign recording the history of mining in the area and there is also one of the strangest monuments to be seen anywhere on the goldfields. It is a plinth with a strange lump on the top which, as the plaques indicate, was "erected by the Harrietville Historical Society to the memory of the pioneers of this valley of gold" on the site of the former School of Mines. The strange plinth is explained as the three phases of mining with the "lump" of stone on the top representing 'the rounded water-worn stones from the alluvial and dredging phases of mining'; the white quartz in the middle of the plinth representing reef mining; and the grey-blue Ordovician rock at the bottom being 'the host rock of most of Victoria's gold bearing reefs and lodes'. It is surrounded by old dredge buckets and while it may not be attractive it is certainly informative. It was built in 1961.

Gold Panning
It is still possible to hire gold-washing pans and to discuss panning techniques and suitable prospective locations. Alluvial panning can be rewarding for those who want to experience, first hand, the magic which first drew vast numbers of fossickers and prospectors to the district.

Gold Ghost Towns
Making the journey from Bright to Mount Hotham it is possible to detect the remnants of a number of gold mining towns. The names Freeburgh, Germantown and the implausibly named Smoko are reminders of the booming communities along the Ovens River in the 1850s and 1860s. The old Freeburgh Community Hall is one of the few buildings still standing. These townships vanished during the era when dredges scoured the valley for the last remnants of gold.

The Tronoh Dredge Hole
As a result of the Tronoh Company dredging for gold on the Ovens River between 1941 and 1947, Harrietville has been left with two artificial lakes joined by a narrow neck of water. The main lake is 100 x 80 metres and the smaller lake is about 100 x 40 metres and up to 30 metres deep. Both are located within 1 km of centre of the town. Lake Tronoh is the largest artificial body of water in the Ovens Valley and the local community is developing it by introducing walking tracks, picnic tables, swimming facilities, historical information and native revegetation.

Walking in the area
Harrietville has a long history as a gateway to the high alpine country that towers above. From Harrietville there are a number of excellent walks. There is the Bungalow Spur Track to Mount Feathertop (at 1922 m Feathertop is the second-highest peak in the state) which is 11 km one way and takes around 4-5 hours. It is well graded and is sheltered for most of the way but the final part of the walk is across treeless alpine slopes. The Bon Accord Spur track is 12 km one way and traverses the  route from Harrietville to Razorback taking around 4-5 hours. Then there is the Razorback Track which is 11 km from Mount Feathertop to Mount Hotham. Much of the undulating and rocky walk is above the treeline with fine views across the Diamantina Valley to the High Plains, as well as down the Ovens Valley.

* Prior to the arrival of Europeans the Waveroo Aborigines lived in the area.

* In 1852 gold miners followed the Ovens River up from Bright and discovered gold in Harrietville. In the same year Harrietville became a resting place for those heading for the Omeo, Dargo and Glen Wills goldfields.

* Reef mining commenced in the area in 1861. At one point 348 reefs were officially registered.

* In 1863 alluvial mining began between Bright and Harrietville with 98% of the miners being of Chinese descent. In 1864 there were 2,850 miners in the Buckland Division, of them 2,300 were Chinese.

* In 1864 Angus McMillan was asked to survey a road from Omeo to Bright.

* By 1876 there were thousands of miners in the valley. The school at Harrietville had 350 children on the roll.

* In 1879 Harrietville was officially proclaimed a town. The following year an Athenaeum Hall and Library were opened.

* Dredging began in the 1890s as the reefs became uneconomical. So many dredges were in use that a foundry was set up to supply the machinery in Wangaratta.

* 1939 - the enormous Tronoh dredge, owned by Tronoh mines of London and transported to Australia in sections, began operation. Dredging to a depth of 40 metres and employing sixty men it operated between 1939 and 1947. It was shipped to Malaya in 1956.

* 1939 - bushfires ravage the mountains and destroy the Mount Hotham chalet.

* Today the town offers cottage and B&B accommodation for people wanting to stay below the snowline and visit Mount Hotham. One of the reminders of the town's early history are the dredge buckets filled with flowers along the main street. 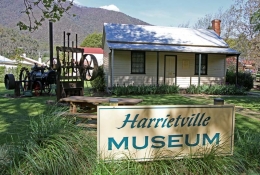 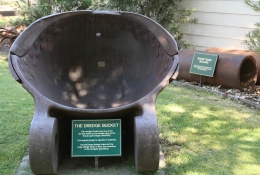 The dredge bucket in the grounds of the Harrietville Museum. 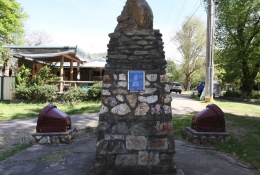 The Pioneer Memorial with its unusual lump of smoothed stones on the top. 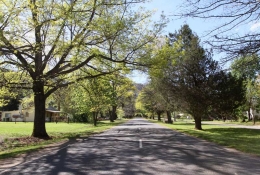 The main street of Harrietville in spring.