Harrow is a quiet village on the banks of the Glenelg River which claims to be the oldest inland town in Victoria. In recent times the establishment of the Harrow Discovery Centre and Johnny Mullagh Interpretative Centre has raised its profile. This excellent and modern museum chronicles, in great detail, the history of the first cricket team (a team made up of local Aborigines) to tour England. There is a deep sense of history in the town and a finely honed sense of humour with signage pointing towards an imaginary cemetery (the Harrow Bone Yard) and sheds reminding visitors where the local undertaker and Dr Potts's Surgery were located.

Harrow is located 363 km from Melbourne via Ballarat and Stawell.

The town was named by the man who surveyed it in 1852. It is assumed that he named it after Harrow in England, which is famous for its elite school.

Harrow Discovery Centre and Johnny Mullagh Interpretative Centre
The highlight of the town is the Harrow Discovery Centre and Johnny Mullagh Interpretative Centre. Allow a few hours to explore it fully because it not only tells the remarkable story of the first cricket tour of England (it was by an Aboriginal team from the local area) it also offers an excellent video show and has a clever evocation of the journey across to England. It provides detailed information about every member of the team and also has fascinating displays relating to the district and the history of cricket. The Centre is open from 11.00 am - 4.00 pm seven days a week (it opens at 11.15 on Fridays), tel: (03) 5588 1387.

The Aboriginal Cricket Tour of England in 1868
In the preface to Cricket Walkabout – the story of the Aboriginal cricket team which toured England in 1868 which can be purchased at the Harrow Discovery Centre – former Prime Minister, Malcolm Fraser, raises a most tantalising question: “Wherever the British went, they tended to take cricket with them: to Ceylon, India, Pakistan, countries in Africa and the West Indies … this raises the question why were not more effective efforts made … to persuade Aboriginals to play cricket in Australia?”
It is a question which hangs around the first cricket tour of England by Australians.
Cricket was introduced in Victoria in the 1840s and by the end of the decade there were teams across the entire state including teams formed on rural properties. These teams often included local Aborigines who were trained in the finer arts of cricket by local farmer’s sons.
In the case of Harrow a team of local Aborigines was formed and they played their first game at Edenhope. They lost. Then they played a second game and won. They were to form the basis for the team which would tour England in 1868 – 14 years before the first Ashes Tour.
This was not some relaxed and colourful tour (although the members of the team did show off their boomerang throwing skills to amazed English folk) but a genuine, challenging tour  where, over a period of several months, they played 57 games, won 14, lost 14 and drew 19.
On the walls of the Harrow Discovery Centre are photographs of all the players and detailed personal histories. In the case of Johnny Mullagh, who is part of the naming of the centre – it is known as the Johnny Mullagh Interpretative Centre – and who is featured in a statue as visitors enter the building, there is a photo and the caption:
“Johnny Mullagh – Unaarrimin – Born c.1843 Died 1891. Talented right-hand batsman Medium fast bowler. Played 45 matches on the tour. 1698 runs at 23.65. 245 wickets at 10.00. Johnny Mullagh was the most famous Aboriginal cricketer of his time and the star of the English tour. He learnt his cricket with a red gum bat at Pine Hill Station and was regarded by the Edgar family as a ‘wonderful bat’. He batted 75 against the MCC at Lords in 1868 and send down 1877 overs, of which 831 were maidens. After the tour, Mullagh was employed at the MCG in Melbourne with Johnny Cuzens at the rate of £1 per week each for 20 weeks during the 1868-69 season. He worked at Pine Hill as a shearer and rabbiter, where he died in 1891.”

Aboriginal Cricket Trail Tour
At Edenhope there is a cairn beside Lake Wallace in the grounds of Edenhope P-12 College in Lake Street which recalls the first Australian cricket team to tour England in 1868. This remarkable all-Aboriginal team practised on the shores of Lake Wallace before departing for England. The cairn is one of six locations in the Wimmera which are associated with that memorable 1868 tour. Behind the cairn is a large board which has photos of all the cricketers, a detailed history of the English tour, and a circular route through the West Wimmera which includes visits to (1) the cairn (2) Dergholm where there is a commemorative stone to Brimbunyah (Tommy Red Cap) one of the players (3) Apsley where, in Apsley Cemetery, there is a commemorative stone at the gates dedicated to Murrumgunerrimin (Jimmy Tarpot) (4) Lake Bringalbert where the first cricket match by the Aboriginal team was played (5) Geroke where, at the Jane Duff Memorial, there is a mention of Jungunjinanuke (Dick-a-Dick) and (6) Harrow where there is a truly outstanding Discovery Centre which is devoted to the Aboriginal team.
It is a commentary on the schedule of the side that during their tour they played a total of 57 games winning 14, losing 14 and drawing 19. When they returned to Australia they simply went back to the lives they had previously led. Many returned to their tribal lifestyle. Their coach was Tom Willis who founded Australian Rules football. It is always worth remembering that this tour - a serious and competitive tour - was played 14 years before the first Ashes test.

Gardner Park - Kalang Cottage and the local Lock Up
On the right as you enter Harrow is Gardner Park which has interesting remnants of the town's early history. There is a log lock up and a cottage with an interesting display inside. The town's old vernacular gaol or lock up was built in 1859 and is probably the work of local prisoners. "It is constructed of rough-hewn logs stacked 14 high, crossed and notched at the corners, with a log ceiling and a hipped and gabled roof." The cottage, which can be inspected as the door is opened daily, was named 'Kalang'. It is a restored cottage built in 1876 in the Connewirricoo area and moved to Harrow in 1988. It has a shingle roof and pit-sawn weatherboards and has been furnished with period items.

Presbyterian Church
On the corner of Blair and Swanson Streets, is the elegant Uniting (originally Presbyterian) Church which was built from handmade bricks in 1869.

Hermitage Hotel and Harrow By Night Sound and Light Show
The Hermitage Hotel, located at 30-32 Blair Street was built either in 1848 or 1854 and renovated in the 1890s. Since 1996 it has hosted a popular local entertainment, Harrow By Night Sound and Light Show, in which the local townsfolk dress up and play the parts of 19th century figures associated with the town, such as Johnny Mullagh and Pauline Sutherland's ghost. The night starts with a bush style dinner served by "wenches" and, as the local brochure explains, it is "best described as a light hearted production on the move, the show comprises of a night full of mystery, mayhem and fun, where our audience travels back 150 years in time to Harrow circa 1850 ... all manner of historical characters may cross your path ... bushrangers, troopers, a mad Chinaman, indiscreet women, Major Mitchell, the town doctor and midwife ... ordered out of town by the troopers, the audience is ushered out of the Hermitage Hotel and taken on a journey of the township ..." An award-winning project, it runs once a week. Contact the Harrow Visitor Centre for bookings, tel: (03) 5588 1387.

The Horse Hole and Walking Track
There is a pleasant walking track (the Glenelg River Walk) which starts at the Johnny Mullagh Memorial Park - at the southern end of Blair Street, and follows the river for 1.5 km. It is excellent for birdwatching. At the other end of the track is The Horse Hole, a local swimming spot which was formerly used as a watering hole for the horses of the mounted police. You can access The Horse Hole and the other end of the track directly by walking towards the river on Whittaker Street.

Kout Norien
Located at 7 Harrow-Clear Lake Road (just across the Glenelg River north of Harrow), the Kout Norien property is 589 ha and the historic house was built in 1854 of brick and stone around an earlier stone house (1848). The property was taken up in 1840 and there are some historically significant outbuildings, a slab hut and a slab woolshed (1846). For more information check out http://vhd.heritagecouncil.vic.gov.au/places/70058/download-report. It is a private home. Check at the Visitor Centre.

* Prior to the arrival of Europeans the area was home to people from the Madi Madi and Wutjubaluk Aboriginal language groups.

* In 1836 Surveyor-General Major Thomas Mitchell crossed the Glenelg River near where the township now stands.

* Claiming to be the oldest inland town in Victoria the first business was established on the river c.1840. It was located on the boundary of three large properties.

* A slab cottage, woolshed and outbuildings were constructed at Kout Norien in 1848.

* By 1849 there was a postal receiving location as well as a store, a blacksmith and the Foresters Arms Inn.

* A township was surveyed in 1852. The surveyor named the town Harrow.

* A police post was established in the settlement in 1853.

* Pine Hills property was established in 1858.

* By 1859 local prisoners had built a simple log lock up.

* Mullagh Station was established in 1866.

* A cricket team of local Aborigines toured England in 1868.

* The Presbyterian Church was built in 1869. It was used as a local school around that time.

* The Presbyterian Church was consecrated in 1884.

* At its peak in the 1890s the town had a population of around 250 and two hotels, three general stores, a blacksmith's, a saddlery, a drapery store, a shoemaker, a baker, flour mills, a brickworks and Chinese market gardens.

* A local historical society was formed in 1969.

* In 1995 the Mullagh Cricket Cup was instituted. It is played between local Aborigines and cricketers from the Western District.

There is a useful local website. Check out http://harrow.org.au. 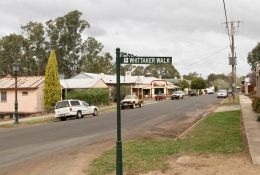 The main street of Harrow 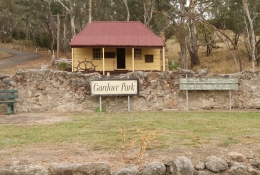 The cottage and the stable wall in Gardner Park 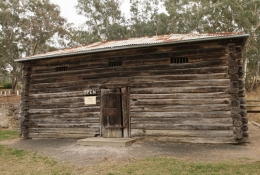 The lock up in Gardner Park 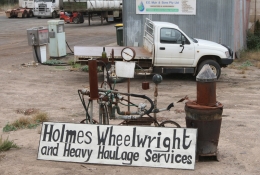 There is a strong sense of rural humour in Harrow 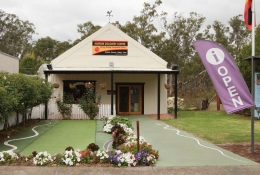 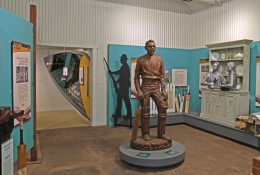 Statue of Johnny Mullagh at the Harrow Discovery Centre 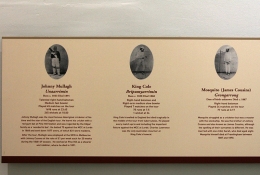 The walls of the Harrow Discovery Centre have detailed information about all of the cricketers. 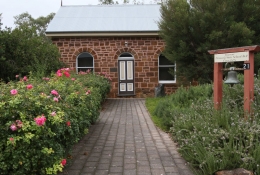 The North Harrow Roads Board building (1868) now owned by the local Historical Society.