Unusual historic town on the western edge of the Blue Mountains.

Today Hartley is nothing more than a couple of churches, an impressive sandstone Court House, and about a dozen buildings many of which are unoccupied. It is still a delightful day trip from Sydney and, when combined with visits to Little Hartley and Hartley Vale, offers a rare insight into life beyond the mountains in the early years of the nineteenth century.
It is hard to image that in the 1830s it was seen as a future major township lying just west of the Blue Mountains on the road to Bathurst and the west. What happened to those dreams? It was by-passed by the railway and very quickly declined in importance. Today all that is left is a remarkable remnant of a town largely unchanged since the mid-nineteenth century.

Hartley is located 148 km from Sydney via the M4 and Great Western Highway. It is 700 metres above sea level.

No one is exactly sure how Hartley got its name. When Governor Macquarie travelled through the area in 1815 he named the "beautiful extensive Vale of Five Miles ... the Vale of Clywwd" after a vale in Wales but shortly afterwards the valley became known as Hartley Valley and it is from that name that Hartley, Little Hartley and Hartley Vale take their names.

The simplest way to experience Hartley is to wander around the village. All buildings have informative signs and the timelessness of this nineteenth century village can be captured by a leisurely stroll. The highlights are:

Hartley Court House
Hartley Court House was designed by Colonial Architect Mortimer Lewis in the Grecian Revival style and completed in 1837 for £1476. It contains a well-preserved Courtroom and a fascinating lockups where early convicts, bushrangers and cattle thieves scratched their names, their sentences and their crimes into the timber-lined walls. There are interpretative signs. It is open for guided tours at 10.00 am, 11.00 am, noon, 2.00 pm and 3.00 pm on Tuesday to Sunday. There is a minimum group of four required. As at the Visitor Centre or tel: (02) 6355 2117. Check out http://www.nationalparks.nsw.gov.au/hartley-historic-site/hartley-courthouse/historic-site for more details.

St Bernard's Church was built from pale sandstone which was quarried at South Bowenfels and hand sawn local timber. The church, with a strong Gothic style, is characterised by a distinctive French influence. It is believed one of the early priests was an admirer of French religious architecture. The stone bricks were cut by different stonemasons (they have distinctive styles) but it is mostly credited to Alexander Binning. If you look carefully you can see pit saw marks on the roof timbers. The sandstone altar was hand-tooled to look like marble. The church was used until 1963 and is still consecrated. It is used for weddings and funerals. Check out http://www.nationalparks.nsw.gov.au/hartley-historic-site/st-bernards-church/historic-site for more details. Tours can be arranged by contacting the Visitor Centre, tel: (02) 6355 2117.

The Farmer's Inn
Located next to St Bernard's is The Farmer's Inn, a late Georgian building construced in about 1843 by John Finn as a family residence. It was used as a Presbytery by St Bernard's for a short time and then became an inn between 1865 and 1895 hoping to capitalise on the needs of miners heading for the Turon goldfields. It abandoned in 1895 but became an inn again in the 1920s. It was built of sandstock bricks and shingles - both of which can still be seen. Today it is used as the Visitor Centre.

Ivy Cottage
Ivy Cottage lies beyond the Farmer's Inn. It was built in the 1850s by John Finn and became the Police Magistrate’s house. It is claimed that the magistrate, whose major job seemed to be dealing with drunks, disliked the idea of being located between the Farmer's Inn and the Shamrock Inn.

Shamrock Inn
Now a ruin with an old tin roof and a log watering trough outside, the Shamrock Inn was built in 1841 for Patrick Phillips but by 1856 it had become an inn specifically to cater for the miners who were travelling through Hartley on their way to the goldfields at Turon.

The Royal
The Royal was probably built in 1848 and opened in 1849. It was the local booking office for Cobb and Co. The hotel contained a number of parlours, at least one of which is likely to have been reserved for women travellers. One source in the late 1890s described The Royal as "one of the twelve hotels which formerly existed in Hartley...[it] continued in business for a great number of years, and, though not possessed of a license at the present day, is catering successfully for the increasing motor traffic to and from the Jenolan Caves."

Victoria Pass
The journey through the Blue Mountains passes through Mount Victoria and drops dramatically onto the western slopes as it heads towards Bathurst. There are still small remnants of the road William Cox and convicts built to open up the west beyond the Blue Mountains. The most famous artefact is the Pass of Victoria, with its stone bridge built by convicts in 1832, which remains a monument to the engineering talents of the early road builders. Sadly it is almost impossible to stop and inspect the construction as you roar up and down the escarpment. Still it is easy to locate as the road, now widened, suddenly narrows to the original bridge.

Meads Farm
Located on the Great Western Highway at Little Hartley, Meads Farm is described by NSW Environment and Heritage as "a rare early farmhouse/inn with its outbuldings (particularly the barn) in good repair. Its special association as an inn from 1866 to 1882 with the Hartley Vale oil-shale works from which the inn took its name, the Kerosene Hotel, distinguishes it from the other inns along the Hartley section of the Great Western Highway.

Aesthetic: the main homestead, landscaping and gateposts are highly significant elements in the local cultural environment. The barn has much diminished heritage value since the recent alterations.

Social: as an inn catering for oil-workers from the initially 'dry' village of Hartley Vale, the Kerosene Hotel had high social significance locally in the 1860s and 1870s and continuing local significance thereafter as part of the Little Hartley group of distinguished buildings."

The original building was a four-room structure of sandstock bricks erected in 1857. It was leased by John Lewis Meads around 1860 and in 1866 John Martin converted it into the Kerosene Hotel. See http://www.environment.nsw.gov.au/heritageapp/ViewHeritageItemDetails.aspx?ID=1960141 for a detailed history of the building.

The Comet Inn, Hartley Vale
The Comet Inn was built in 1879 by Thomas Thompson and named after a brand of kerosene which was produced from the shale in the local area. It remained an inn until 1913 when the local shale mines closed.

Today it offers olde world accommodation, a boutique restaurant and function facilities surrounded by gardens, an orchard and a walking track which passes the old shale workings. Located on Hartley Vale Road, at Hartley Vale tel: (02) 6355 2247. Check out http://www.cometinn.com for details.

Collits Inn
Collits Inn was originally constructed in 1822 as "A weatherboard commodious Barrack and Guard House with an enclosed kitchen garden, for the accommodation of the Military Guard stationed at this post on The Great Western Road, which was established for the keeping open communication with Bathurst as well as for the protection of travellers". By 1824 Pierce Collit (after whom it is named) was seeing his family home evolve into an inn where people travelling up and down the escarpment would pause for refreshments. At one time the task of getting wagons and carriages up and down the escarpment was so dangerous that passengers would simply stay at the inn and wait until the vehicle had made the journey up or down the steep hill. It had a long and chequered history and was finally restored in 1998 and for the next decade became a successful restaurant and B&B. Today it is a private home. For more details check out http://www.megalongcc.com.au/Ambermere/collits_inn.htm

* The area was occupied by the Gundungurra Aboriginal people for an estimated 40,000 years before Europeans arrived.

* The first Europeans in the area were the explorers Blaxland, Wentworth and Lawson in 1813. They were impressed with the agricultural potential of the area. Wentworth remembered 'when the boundless countryside burst upon their sight' and he was referring to the area around Hartley.

* The township of Hartley was established in 1815. It quickly became an important stopping point for travellers who crossed Victoria Pass and dropped down into the plains to the west of the Blue Mountains.

* In 1815 Governor Macquarie, on his way to Bathurst, visited the valley and named it the Vale of Clwyd. He claimed iit reminded him of a vale in North Wales.

* By the mid-1830s the authorities felt there was a need for a police station and court house between Penrith and Bathurst. Hartley was chosen.

* By 1837 the town had both the Court House and the police barracks.

* In 1840 a future town was surveyed. It was laid out with sixteen streets in a grid system but most of it was never completed. The land was sold at £8 an acre.

* By 1856, as a result of the gold rushes to Turon, the town had doubled in size. The prospectors heading for the goldfields stopped at Hartley and soon there were butchers, blacksmiths, and and a number of hotels.

* In the 1860s the district was revitalised with the discovery of kerosene shale. The discovery brought miners and their families to the area and soon there over 2000 people in the district.

* In 1869 the town's future and its importance evaporated when the Great Western Railway across the Blue Mountains went north from Mount Victoria and descended by the zigzag railway to Lithgow.

* By 1887 the Court House, once the legal centre of the district, was closed and its functions transferred to Lithgow.

* Today Hartley is a fascinating reminder of what might have been. The Court House is a strange remnant of past times. It is run by the NSW National Parks and Wildlife Service who provide a range of informative books and brochures.

There is no accommodation at Hartley. 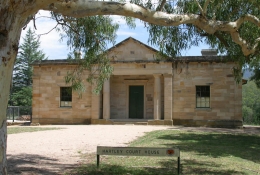 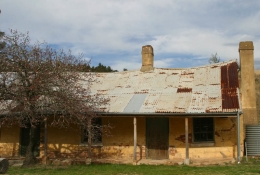 The old Shamrock Inn on the main street of Hartley 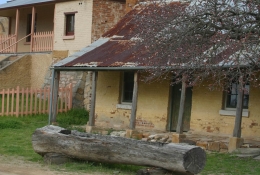 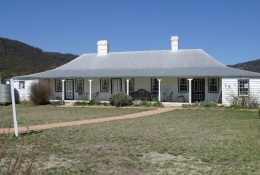