Harvey is a rural service centre surrounded by rich agricultural lands which are covered with orchards and market gardens and where sheep, beef and dairy cattle are grazed. The combination of fields and paddocks kept green by irrigation and the wildflowers on the surrounding hills led to the area being dubbed the 'Land of Milk and Honey' before it became 'A Breath of Fresh Air'. A major irrigation system was developed in the 1930s preventing Harvey from experiencing floods and opening up the area to dairying, beef and horticultural pursuits. Citrus fruit, table and wine grapes, and agricultural products are continually developing within the Shire.

Harvey, which is 36 m above sea level, is located 138 km south of Perth via the Kwinana Freeway and South Western Highway.

There are two possible explanations for the name. One source claims that the first European to explore the area was a British army officer, Major Harvey, who surveyed the district in 1834. Another source claims that town was named after the Harvey River which, in turn, was named by Governor Stirling after Rear Admiral Sir John Harvey RN, Commander in Chief of the West Indies Station in 1818. Governor Stirling was in command of the Brazen at the time and Harvey recommended him for promotion. From the 1830's the Harvey area was known as "Korijekup" the Aboriginal word meaning "The place of the Red Tailed Black Cockatoo." By the 1890's the Korijekup Estate became known as the Harvey Estate and as the township took shape in the 1890s it became known as Harvey.

Stirling Cottage
Located in the gardens behind the Visitor Centre is Stirling Cottage - a  replica of a cottage built in the 1850's on land owned by Sir James Stirling near the Harvey River. The original cottage was home to May Gibbs, creator of Snugglepot and Cuddlepie, during 1885-1886. It is believed that she was inspired by her stay in Harvey. The signage outside the cottage notes: "May along with brothers Bertie and Ivan would take long walks through the bush turning over stones, examining flowers and bird nests and swimming in the river pools. As there was no school in the area, the children were given lessons by their mother at home. May displayed an early talent for drawing and was encourage by her father, himself a talented artist. In later years May described her time in Harvey as 'the two happiest years' of her life."
Features of the original cottage were hexagonal paving blocks fitted together as flooring, "pit sawn" Jarrah walls, and a sheoak shingled roof. The kitchen was at the rear of the cottage under a separate roof and the men's quarters, the stables and a blacksmith's shop were nearby.
In 1994 a replica of the original Stirling's Cottage was built. The sign outside the cottage points out that it was "Modelled on the original Stirling Cottage ... featured the shingled roof, jarrah walls and hexagonal paving blocks of the original."

Harvey Internment Camp Memorial Shrine
Located as part of the gardens around the town's Visitor Centre, the Harvey Internment Camp Memorial Shrine is a memorial to the 1,000 Italian internees who were housed in an internment camp at Harvey. The camp was purpose built in 1940 for £80,000. The internees filled their idle hours growing vegetables to feed both themselves and the soldiers guarding them. They also built a commemorative shrine in a paddock within the camp using locally quarried stone and concrete. It was designed by Guiseppe Raneri and constructed by Giovanni Boschetti and Gaetano Tomba. After the internees departed, the monument was protected by barbed wire and in 1992 a shrine was opened. The key to the shrine is held at the Visitor Centre. For more information check out https://monumentaustralia.org.au/themes/conflict/ww2/display/60588-internment-camp-memorial-shrine.

Harvey River Diversion and Drainage Scheme
A sign near the Visitor Centre explains the importance of the Harvey River to the development of the town and the district. It notes: "The Harvey River ... rises in the Darling Scarp and flows in a north westerly direction draining into the southern end of the Harvey Estuary, via the Peel Inlet to the sea.
"The Harvey River formerly meandered across the Swan Coastal Plain through wet flats and swamps.
"To drain this fertile plain, which is surrounded by a number of small streams, a main drain for the river was dug in the 1930s. Known as the Harvey Diversion, this drain diverts most of the river's water directly into the sea, west of Harvey at Myalup.
"The section of river bordering these gardens (the gardens near the Visitor Centre) was rejuvenated in 1998 under the "New Work Opportunities" scheme. The new pristine waterway has become home to a variety of bird and water life and reflects what the river was probably like at the time of settlement.
"From 1930 on when the Depression was hurting so many, one of the biggest community employment programs imaginable began in Harvey. This was a Government sponsored plan to divert the Harvey River to an outlet at the ocean near Myalup, which removed the fear of flooding downstream and brought valuable agricultural land into production. No less than 2,500 men were camped west of Harvey and at times 3,500 men lived in the camps at Myalup and nearby Stonehouse.
"To learn more about the Diversion follow the trail, a memorial to the thousands of men who worked on the Harvey River Diversion and Drainage Scheme has been placed beside the Diversion in Baker Street."

Harvey Mosaics
In recent times the towns and villages of the area have featured impressive mosaics at their entrances. Myalup, Binningup, Clifton Park, Cookernup and Harvey all have impressive mosaics. The Harvey main street also boasts large murals depicting Harvey country lifestyle and history. There is detailed information on each mosaic at https://www.harveyvisitorcentre.com.au/listing/mosaics-and-murals.
Typical of the detail is its explanation of "Mural 5 - Harvey Vision
"A Harvey Mainstreet project which brings colour and messages of historical and cultural significance into the main street of Harvey. Located in the centre of town, Harvey Vision celebrates who we are, through exploring our unique history, highlighting some of the things that are important to us as a community.
"The images, animals and people portrayed in these panels have all been drawn from the local area. Special care has been taken to represent details of the local species of flora. Each section of the mural draws comparisons between the old and new ways of doing things, reflecting the progression of these industries that still play such an important part in the local economy. Each panel is 6m long and 2m high and the paintings are acrylic with some mosaic sections.
"Local Artist ‘Anthea’ started the mural in 2000 and completed it in 2010; each section took 3 to 4 months to complete and the total cost was $25,000. Four Harvey Mainstreet murals were completed in 2002 after 2 years. The first panel depicts Harvey's early settlement and timber industry featuring the cedar colours of greens, browns and yellows. The second focuses on the dairy and beef industries, the third features Harvey's citrus, water, irrigation, horticultural and viticultural industry. Each panel is 6m long and 2m high and painted in acrylic with some mosaic sections."

Harvey Dam
Located on Weir Road, the Harvey Dam, and further on the Stirling Dam, offer walkways, landscaped recreational areas, free electric BBQs, playground facilities, shady gazebo’s, picnic tables and toilets.
The area's agricultural potential was developed after 1916 when the Harvey Weir was built. The combination of the Harvey Weir, the first irrigation system in Western Australia, and the Stirling Reservoir, ensured the agricultural prosperity of the region. Irrigation channels ran from the Harvey Dam which now has a capacity of 56 gigalitres and a catchment area of 126 square kilometres. Marron, trout and perch fishing are permitted only at the rear of the dam in the season with a permit. Check https://visitbunburygeographe.com.au/business/harvey-dam-and-amphitheatre for additional details.

Big Orange
Located 2 km north of Harvey via Third Street, the Big Orange sits on a 10 metre tower with an additional 4 metre (62 steps) climb to a viewing platform inside the orange. For many years the 'Big Orange' was a focal point when you drove into Harvey. It sits above the Harvey Fresh orange orchards. It is possible to climb the Big Orange. Entry is a gold coin donation. It is open from 10.00 am - 4.00 pm. Check out https://harveyriverestate.com.au/our-cellar-door for more details.

Bibbulmun Track - Harvey Access Point
The Bibbulmun Track, which starts in Kalamunda in the north goes for more than 1,000 km south to Albany and passes near Harvey. There is an access point at Harvey and the overall distance from the Harvey Visitor Centre to the Long Gully trestle bridge (the Bibbulmun Track drop off point) is 49.4 km. The Long Gully trestle bridge was built in  1949 and was 128  metres long. Sadly it was destroyed in the Boddington  bushfire. The bridge provided the only viable crossing point of the Murray River for walkers on the Bibbulmum Track. A new state-of-the-art bridge,  built 12 km  downstream of the old bridge site in Lane Poole Reserve, was named Bilya Djena Bidi, an Aboriginal term for a '(swinging) river foot bridge'.
The locally designed and built bridge spans 82 metres and includes two 12-metre towers that hold the bridge above the 100-year predicted flood level, enabling Bibbulmun Track walkers to safely cross the Murray River. It is the starting point if you are walking the section from Harvey to Collie. Look for the yellow triangular markers, symbolising the 'Waugul', the rainbow serpent of the Aboriginal Dreaming. There is important information and directions available at https://www.harveyvisitorcentre.com.au/listing/bibbulmun-track-harvey-access-point.

* Prior to the arrival of Europeans the district was home to the Kaniyang Aboriginal language group.

* In 1829 Captain Stirling, who later became Governor of Western Australia, selected 12,800 acres and called it the Harvey River Settlement.

* The first European to explore the area was a British army officer, Major Harvey, who surveyed the district in 1834.

* In 1844 Maurice B. Smith took up 160 acres near Lake Preston becoming the first European settler in the district.

* In 1845 a bridge was built over the Brunswick River.

* By the late 1890s the Harvey River area was renowned for its orchards.

* The major development of the area's agricultural potential occurred after 1916 when the Harvey Weir was built.

* During the 1930s over 2,500 men worked on the Harvey Diversion and camped near the town.

* The present Harvey Dam was expanded to meet the irrigation needs of the area in 2002.

There is a useful local website. Check out https://www.harveyvisitorcentre.com.au. 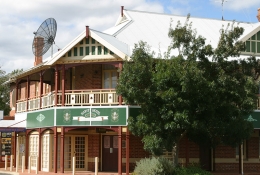 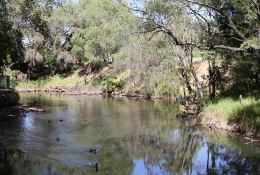 The Harvey River near the Visitor Centre 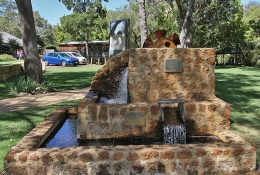 The waterwheel monument near the Visitor Centre 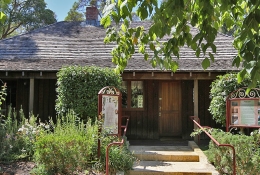 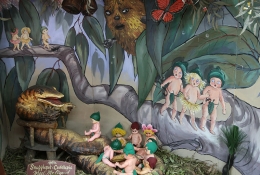 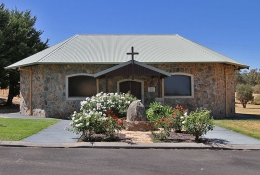 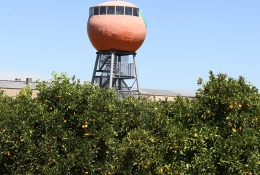