Tiny village noted for its caves, rainforests, historic railway and a thermal pool.

Hastings is a tiny village whose sole importance lies in the excellent Hastings Caves State Reserve which is a major attraction with its caves, thermal pool, remnants of rainforest, historic timber railways and excellent picnic areas.

Hastings is located 97 km south of Hobart on the Huon Highway.

No one is sure why Hastings got its name but, given the early settlers penchant for taking well-known English towns (Brighton, Richmond etc) it is likely that it was named after the famous town of Hastings on the English south coast.

Newdegate Cave
Newdegate Cave is located about 5 km from the Visitor Centre. The entrance to the cave is about a 5 minute walk from the car park through a particularly beautiful section of new growth rainforest - the forest was logged in 1917. The Parks and Wildlife service have produced a brochure (it is downloadable at http://www.parks.tas.gov.au/file.aspx?id=19220) which provides detailed information about the caves and the Thermal Pool.

Along the short walk to the cave entrance are signs which recount the hardships of the early timber cutters. On the right hand side of the path is an old logging platform where logs were hauled from the surrounding forest and loaded onto trolleys which ran along tram tracks to the sawmill in Hastings, 10 km away, where they were cut and prepared for export.

The rainforest includes ferns, moss, native laurel, mountain pepper, blackwood, sassafras, tea trees, kangaroo ferns, musk, silky fan ferns and myrtle and the fauna in the area includes platypus, trout and eel in the creek and quolls, lyrebirds and currawongs in the rainforest.

Newdegate Cave itself has one particular cave, Titania's Palace, which is one of the great cave experiences in Australia. It is located at the end of a large cavern and is a wonderland of dramatic stalagmites and stalactites. It is Titania's Palace which has led to Newdegate Cave being described as one of the most beautiful caves in the country. The guided tour lasts 45-50 minutes and includes more than 500 steps. Inspections of the cave are held at 11.15 am, 12.15 pm, 1.15 pm, 2.15 pm and 3.15 pm but they do vary according to the seasons. Information regarding entry fees and times are detailed on http://www.parks.tas.gov.au/index.aspx?base=4525.

The caves were named after Sir Francis Newdegate who was the Governor of Tasmania from 1917-1920. It is claimed that the Newdegate Cave is the largest cave in Australia which occurs in dolomite, rather than limestone.

The Thermal Pool
The Thermal Pool is a short walk from the Hastings Caves Visitors Centre. The Hastings Caves Thermal Pool area also includes a sensory trail (the Platypus Walk) and a Hot Springs Nature Trail. The Thermal Pool is set in bushland surrounded by lawns, good seating and modern picnic facilities. The pool remains at a constant 28-30°C throughout the year. Although the entry times are reduced in the winter months, the thermal pool is open from 9.00 am - 5.00 pm during the summer holidays. For specific times check out http://www.parks.tas.gov.au/index.aspx?base=4525.

The Parks and Wildlife website explains the thermal pools in the following terms: "The temperature of thermal springs may be due to three different causes: underground water (either meteoric or juvenile) coming in contact with hot underground intrusive rock of recent origin; volcanic activity, where the water is hot rather than warm; or simply the geothermal gradient of water coming from great depths, which is the most likely cause of heating at Hastings ...

The water probably enters the dolomite in the caves area at a higher elevation than the springs area, descends to 1000m in a continuous stream in the synclinal dolomite beds, passes beneath the quartzite beds and has sufficient hydraulic gradient to be forced up to the surface. It is contained in dolomite beds, ascends the major fault zone and then seeps through the alluvial cover.

The springs occur in several spots coinciding with an intersection between major faults and bedrock fractures over an area of about 25 hectares in the vicinity of the pool. The temperature of the water is 30°C and remains remarkably constant from day to day." For more information on the geology of the caves and the thermal pool check out http://www.parks.tas.gov.au/file.aspx?id=31231.

The Ida Bay Railway
Located at Lune River (5 km east of Hastings Cave) the Ida Bay Railway is a delightful two hour trip (7 km each way) through peaceful Tasmanian bushland from 328 Lune River Road, Lune River along the shores of Ida Bay. On the route it passes the old Ida Bay wharf and graveyard, the site of Jagers sawmill and reaches Deep Hole Bay. The tramway was constructed in 1922, is known to be the most southerly railway in Australia, and the carriages (some are built on bogie wagons dating from the 1890s) are driven by two Malcolm Moore diesel locomotives. In the summer months the tramway journey is made at 9.30 am, 11.30 am, 1.30 pm and 3.30 pm seven days a week. This is reduced in the winter months to Friday, Saturday, Sunday and Monday at 10.00 am, noon and 2.00 pm. Tel: (03) 6298 3110 or check out http://www.idabayrailway.com.au/. There is a video of the journey at http://www.discovertasmania.com.au/about/regions-of-tasmania/hobart-and-south/dover.

* Prior to the arrival of Europeans the area around the Hastings Caves was inhabited Nuenonne Aborigines. There is no archaeological evidence to suggest they used the caves.

* By the mid nineteenth century timber workers were in the area searching for stands of sassafras, huon pine and stringy bark.

* The discovery of good stands of timber led to the development of a town which had  a port at Ida Bay, a sawmill and eventually a track to transport the timber to the shoreline.

* In November, 1917 a group of timber workers from the Hastings Mill discovered three limestone caves.

* In 1919 the State Government declared 109.8 ha around Newdegate Cave an official Cave Reserve.

* The Newdegate Cave was officially opened on 19 January, 1939 along with the Thermal Pool. The Thermal Pool had been built and the road to the cave developed under a Depression-era unemployment scheme.

There is no accommodation at the Caves.

The Hastings Parks and Wildlife Service has a useful website relating to the park and the caves. Check out http://www.parks.tas.gov.au/index.aspx?base=4212. 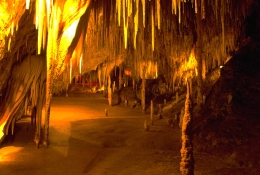 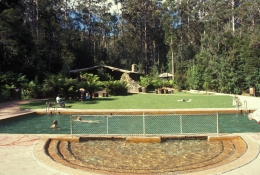 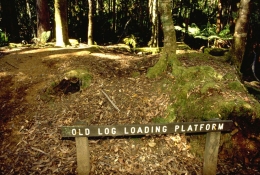