Hat Head is a small, unspoilt town which lies on a narrow bar of sand between the Pacific Ocean and the Korogoro Creek. It is nestled in behind the Hat Head National Park. It has become a retreat for people wanting to get away from the tourist centres and is known for its bushwalking, its excellent surf beaches, its reliable beach, deep sea and rock fishing and, most of all, it is known as a place of great peacefulness and beauty.

Hat Head is a tiny coastal town located 455 km north of Sydney and 33 km east of Kempsey on the edge of Hat Head National Park.

Here is an example of a name which was created by someone's desire to state "the bleeding obvious". Hat Head was named after the headland which, not surprisingly, looks like a hat.

There are a number of walks in the park. Three popular ones are near the town:

1. Korogoro Walking Track - this 3.2 km circuit walk starts beyond the camping and caravan site, crosses the creek and circumnavigates the coastal rainforest and grassy slopes of Hat Head. The walk includes views of both Smoky Cape and Crescent Head; paths through stands of paperbark and casuarinas; wildflowers in season - particularly white flannel flowers; whale watching in autumn and spring; and the Korogoro Arch and Cave, a formation which can be explored at low tide. For more information check out http://www.nationalparks.nsw.gov.au/hat-head-national-park/korogoro-walking-track/walking

2. Connors Walking Track - This is an moderately difficult walk of 6.7 km return (about three hours each way). It starts at the Gap car park (follow Gap Road from Hat Head Road) and follows the coast passing both O'Connors Beach and Third Beach, both of which lie south of the town. It offers excellent views from the headlands and passes through stunted heathland, exposed coastal slopes and small pieces of rainforest. For more information check out http://www.nationalparks.nsw.gov.au/hat-head-national-park/connors-walking-track/walking.

3. Kinchela Trig Lookout - offers panoramic views of the coastal estuaries and mountain hinterland from Hungry Hill. It can be reached by continuing beyond Windy Gap on the Connors Walking Track or by driving along Hungry Road to the northern parking area at Kinchela Trig. It is only 300 m and takes around 15 minutes. For more information http://www.nationalparks.nsw.gov.au/hat-head-national-park/kinchela-trig-lookout-walk/walking.

* Prior to the arrival of Europeans the area around Hat Head was inhabited by the Dhanggati Aborigines.

* In May, 1770 Captain Cook sailed past Hat Head. He named Smoky Cape to the north because of the fires which he saw on the headland.

* In 1817 John Oxley became the first European to traverse the area. He described it as swampy and inaccessible which discouraged settlement.

* In the early 1840s cedar cutters moved into the area. At one point in 1840 it was estimated that there were over 200 timber cutters in the area.

* By 1842 the cedar in the district was exhausted. At this point the inland area was given over to mixed farming with beef and dairy cattle dominating. There was an unsuccessful attempt to grow sugar cane.

* In 1972 Hat Head National Park was officially declared and reserved.

* In 1987 Hat Head was chosen for a pilot 'dune care' scheme and the following year the Hat Head Community Dune Care Group - the first of its kind in Australia - was formed.

The Macleay Valley Coast Tourism site has additional information about the flora and fauna of the area. Check out http://www.macleayvalleycoast.com.au/pages/hat-head/ 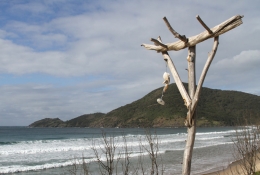 The beach at Hat Head looking across to the headland. 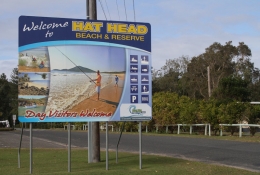 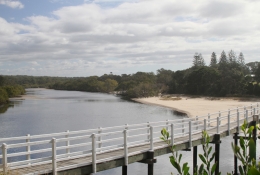 The bridge across Korogoro Creek to the Gap. 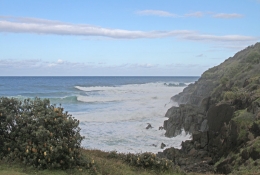 The Gap on the coast near Hat Head.