Historic railway town described as 'The Hub of the Flinders Ranges'

Hawker is a tiny settlement which describes itself 'The Hub of the Flinders Ranges'. The reason is simple:  it is at the junction of roads from Port Augusta, Marree, Orroroo, Blinman and Wilpena Pound. The rainfall in the Hawker area is as low as 175-300 mm per annum and the climatic zone is officially described as semi-arid. Historically a few years of serious drought were enough to wipe out a number of substantial wheat farms which had briefly prospered in the area. Today the town is driven by tourism and visitors drive through on their way to explore Wilpena Pound and the beauties of the Flinders Ranges.

Hawker is located 378 km north of Adelaide via Clare and Carrieton. It is 401 km via the coast road through Port Pirie and Port Augusta. The town is located 56 km south of Wilpena Pound.

Hawker was named after George Charles Hawker. It was named in 1880. Hawker was the Commissioner of Public Works at the time.

A Heritage Tour of the Town
Hawker is a town where simply walking around provides an opportunity to explore the development of the settlement.

* Outback Motel - There is some interesting old farm equipment in the grounds of the Outback Motel including an old wooden dray with wooden wheels, known as a bullock jinker.

* Railway Station Complex - The historic railway station (which dates from 1880) with its water tower. Goods Shed, Wool platform and station crane is located on the edge of town. It is listed on the Heritage Places Database.

* An Historic House - In Heysen Avenue there's a house which has been made of pressed metal and corrugated iron.

* The Hawker Hotel (formerly known as the Royal Hotel) dates from 1882 and is located at Elder Terrace.

* Hawker Motors - located on the corner of Cradock and Wilpena Roads, has a museum with a display of gemstones, fossils, pioneer memorabilia and Aboriginal artefacts. It is also the Visitor Information Centre.

* St Philip and St James Catholic Church
Located at 20 Cradock Street, the Heritage Places Database describes its significance as "This church is associated with the establishment and history of the Catholic community in the Hawker district. The quality of the design, detailing and construction of this Gothic style church demonstrates the importance of such places of worship in the lives of that community". For more information check out http://apps.planning.sa.gov.au/HeritageSearch/HeritageItem.aspx?p_heritageno=16347.

Jarvis Hill Lookout
Located 6.5 km south west of the town this lookout includes a walking trail. The lookout provides an excellent view over Hawker and the surrounding countryside.

Cradock
Cradock is located 74 km north-east of Quorn. Like many of the tiny settlements in the area, it prospered briefly when the rains were good and collapsed during a period of extended drought. It is now little more than a memory and a particularly delightful sandstone church, St Gabriel's Catholic Church, which was designed by Thomas Burgoyne, built in 1882, and opened in 1883. It is now included on the South Australian Heritage Register. There is an excellent and detailed history of the town at https://www.southaustralianhistory.com.au/cradock.htm.

Yourambulla Caves Historic Reserve
Yourambulla Caves Historic Reserve is located 57 km north of Quorn on the Flinders Ranges Way. There is a problem. It seems to be closed most of the time with the owner (it is on private land) unable to meet insurance requirements. Equally there seem to be some people who can visit. Ask at Hawker Visitor Information Centre.
The caves are an important Aboriginal art site. There is a walking trail that leads to the stairs below the cave. The cave contains many paintings, all of which are in excellent condition. There is also an interpretative sign showing the meaning of the painted symbols used. The art portrays "The Dreaming" in which artists record the exploits of their ancestors, outlining rituals and explaining the creation of land formations, animals and plants. The view out across the plain from the caves, which lie below Yourambulla Peak, is impressive. The colours of the cave paintings echo the colours of the dry, brown landscape which lies below.

Kanyaka Station Ruins
Located 42 km north of Quorn on the Flinders Ranges Way, the Kanyaka Station Ruins date from 1851 when Kanyaka Station was a huge property (984 square kilometres) on the limits of the desert where the first owner, Hugh Proby, established a cattle run. Dramatically Proby, who was the third son of the Earl of Carysfort in Ireland, drowned while attempting to cross the Willochra Creek.
His family shipped a granite slab out from Ireland with the inscription:
"SACRED TO THE MEMORY OF HUGH PROBY, THIRD SON OF THE EARL OF CAREYSFORT; WHO WAS DROWNED WHILE CROSSING THE WILLOCHRA CREEK, AUGUST 30th 1852. AGED 24 YEARS."
Kanyaka Station was sold to Alexander Grant who, with his partner, John Randall Phillips Jr, changed from cattle to sheep and built a sixteen-room homestead, overseer's cottage, stables, men's kitchen, sheds, huts, a massive woolshed, carpenter and blacksmith sheds and nearly forty kilometres of dry-stone wall fencing.
Kanyaka attempted to be self sufficient and independent. Supplies such as sugar, tea, flour, tobacco, boots, gunpowder, clothes and other items were bought in bulk as transport was slow, expensive and often unreliable. The station had its own cows to provide milk, butter and cheese, pigs for bacon and a vegetable garden. It became one of the largest properties in the district and grew to support a station population of nearly 70 families but the inevitable droughts (it was the drought which lasted from 1864-1867 which destroyed the economic viability of the property) drove the people away so that all that is left today are the ruins of the buildings. The buildings include remnants of a stable and harness room, a woolshed and an overseer's cottage. Detailed information about the ruins and their history is provided on a number of excellent information plaques which include photographs of the buildings before they became ruins. There is also a very detailed history of the property at https://www.southaustralianhistory.com.au/kanyaka.htm.

Railway Bridge at Hookina Creek
Located north of Hawker (ask for directions at the Visitor Centre) Hookina railway bridge was built in the early 1950’s, when the new broad gauge line was being built from Port Augusta to Leigh Creek. On the 14 February, 1955 a a flood in Hookina Creek washed away the narrow gauge bridge on the Old Ghan line at Hookina Railway Siding and this partly constructed bridge. In 2007 the Hookina Creek again flooded causing considerable damage.

Moralana Scenic Drive
The turnoff for Moralana Scenic Drive is 23 km north of Hawker on Wilpena Road. The Moralana Scenic Drive runs through Arkaba Station and Merna Mora Station between the Elder Range and Wilpena Pound. 15 km along the drive is a signpost to Black Gap Lookout which offers views of Wilpena Pound’s rim to the north and the Red and Elder Ranges to the south. A small gorge lies below the lookout. This is also part of the Hawker to Wilpena section of the Heysen Trail which leads to the rim of Wilpena Pound and offers impressive views of the southern Flinders Ranges.
The drive continues around to the other side of the Elder Range which has a lookout which is ideal for sunset viewing. It is located on the western side of the Hawker to Leigh Creek Road just south of the Moralana Creek. At the lookout is a memorial to the South Australian Surveyor William Greig Evans who surveyed the hundred of Moralana in 1895.

Bunyeroo Gorge
Bunyeroo Gorge is located within the Flinders Ranges National Parks 72 km north of Hawker via the Hawker-Blinman Road. Bunyeroo Gorge runs through the Heysen Range and the drive offers both spectacular views towards the Wilpena Pound Range and an excellent opportunity to see wildlife including kangaroos and euros. There are picnic spots, camp grounds and good walking trails including sections of the famous Heysen Trail which passes through the gorge.

Brachina Gorge
Located 86 km north of Hawker via Parachilna, Brachina Gorge cuts through sharp and dramatic sawtooth ridges of resistant quartzite. This spectacular gorge was once used as a pass through which bullock teams pulled their loads and is now a favourite picnic and camping area. The slopes on the western side of the Gorge are home to a population of the vulnerable Yellow-Footed Rock Wallaby (Petrogale xanthopus). They are part of the largest population of Yellow-Footed Rock Wallabies in Australia, with an estimated population of 2000 in the area. Of particular interest is the ‘Corridors through Time’ Geological Trail in the gorge which explains the geological history of the area. Interpretative signs are located in the gorge and a brochure and map are available at the visitor information centre.

Aroona Valley
Located 95 km north of Hawker via Parachilna, Aroona Valley is a popular camping, picnicking and bushwalking area. The ruins of the old Aroona Homestead, built in the 1850’s, are a reminder of the harshness of this semi-desert area. John Hayward, the first manager, experienced favourable seasons before the drought conditions destroyed the agricultural viability of the land in the mid 1860’s. This location is where the artist Sir Hans Heysen completed some of his most inspiring works.

* Prior to the arrival of Europeans the area was home to the Banggarla Aboriginal people.

* In 1861 the Hookina Inn was built by William Taylor, north of the present site of Hawker.

* In 1863 a village named Hookina was laid out on the banks of the Hookina Creek. It became a resting point for bullock teams.

* Eventually drought ensured that Hookina collapsed and the few residents moved to Wonoka.

* Prior to 1880 there had been a settlement a few kilometres north at Wonoka which was a coaching stop on the route to Blinman.

* Hawker, named after George Charles Hawker, was established in 1880.

* The railway reached the town in 1880. With the arrival of the railway the people of Wonoka moved south to Hawker.

* The north-south railway line which reached Hawker in 1881 and carried passengers, wheat, wool, stock and supplies to and from Hawker until 1970.

* Throughout the 1880s the town became the hub for the wheat farming in the area. The wheat was recognised as some of the best in South Australia and bullock teams brought it to the railhead for shipment to the flour mills to the south. The success of wheat farming was always on a knife edge.

* In 1884 the Adelaide Milling Company built a flour mill in the town.

* During World War II the line became a vital link between Adelaide and Darwin. 18,000 servicemen plus hundreds of thousands of tonnes of military stores and equipment passed through Hawker on their way to the front.

* In 1955 the railway bridge at Hookina Creek was washed away by serious floods.

* In 1999 the locality's boundaries were gazetted.

There is a useful and dedicated local website. Check out https://hawkervic.info. 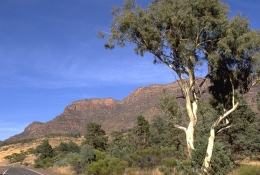 The Flinders Ranges near Hawker 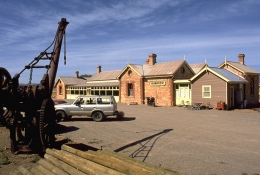 The old Railway Station and heritage listed equipment from 1880 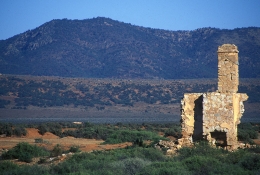 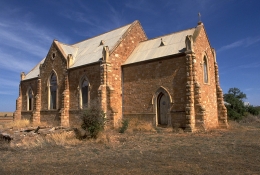 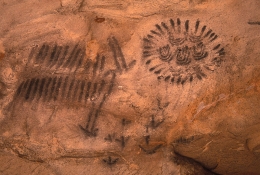 Markings on the cave walls at Yourambulla Caves Historic Reserve 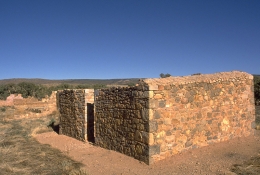 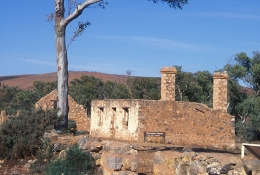