Quiet town in the Blue Mountains

Some Blue Mountains towns, like Leura and Katoomba, attract thousands of tourists every day. Other towns, like Hazelbrook, are largely ignored. They are quiet, essentially suburban, settlements. Yet in the case of Hazelbrook it has excellent bushwalking, is edged by unspoilt bushland and literally dozens of beautiful waterfalls and has unique attractions which deserve to be part of every visitor's "must do" list.

Hazelbrook is located 86 km west from Sydney via the M4 Great Western Highway. It is 674 m above sea level.

Before the arrival of the railway in 1884 there was a home named Hazelbrook House which had been built in the area by Edward Higgs in the 1870s. When the railway station was opened it simply adopted the name of the house. It has been suggested that Hazelbrook House took its name from Hazel Brook, a stream in the area which was named because it has hazel-like trees on its banks.

Walking Tracks and Waterfalls
There are a number of excellent bushwalks to waterfalls on both the northern and southern sides of the Great Western Highway at Hazelbrook.

To the North
Between Woodford and Hazelbrook the visitor can follow Mount View Road to Mabel Falls Reserve where there are a number of tracks leading to Mabel Falls, Edith Falls and Hazel Falls.

Between Hazelbrook and Lawson, Oaklands Road leads down to an area known as The Amphitheatre. where there are a number of tracks leading down to Lyrebird Falls, Horseshoe Falls, Oakland Falls, Glow Worm Nook Falls and Burgess Falls.

These are all excellent opportunities for bushwalking (none of the paths are difficult) and admiring the beauty of the waterfalls.

To the South
On the southern side of the railway line, just west of the Hazelbrook Railway Station, is Terrace Falls Road which runs south to Terrace Falls Reserve. There is a circular walking track at the end of the road which leads to Victor Falls, Terrace Falls and Bedford Pool.

Aboriginal Art in the Area
There are two interesting sites in the Hazelbrook area. Gloria Park, accessed off Oaklands Road, contains Aboriginal wells (http://www.midmountainshistory.org/aboriginal_wells.html) and unusual examples of Aboriginal tool-sharpening grooves in the rocks. At the western edge of Hazelbrook, Queens Road runs off the Great Western Highway heading north and a short distance from the highway there is the appropriately named Kangaroo Street where there is a rocky outcrop with a clearly carved kangaroo.

* On 20 May, 1813 Blaxland, Wentworth and Lawson, while crossing the Blue Mountains, became the first Europeans to pass through Hazelbrook. They are thought to have camped just a little way beyond the present site of Hazelbrook Railway Station.

* the area was surveyed in 1878 and the name Hazelbrook appeared shortly afterwards.

* the railway arrived in the 1860s and by the 1880s the area was opened up for development but it never achieved the level of success of Leura or Katoomba which had more scenic vistas and attractions.

* Today it is a quiet village on the way up the mountains. It has a population of under 5,000.

http://www.bluemts.com.au/info/towns/hazelbrook/ provides basic information and details about accommodation in the area. There is a detailed history at http://www.midmountainshistory.org/hazelbrook.html 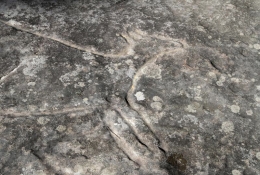 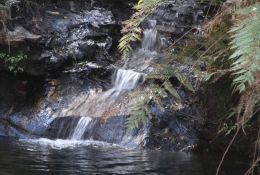 Small falls exist on both sides of the highway near Hazelbrook.