Heron Island is a small coral cay on the Great Barrier Reef. It is located 72 km north-east of Gladstone and 539 km north of Brisbane. It promotes itself as an eco destination where the coral, often bleached at other destinations, is still multicoloured, and the premier attractions are snorkelling and diving. The island is an ideal place to see the coral, the local birdlife, the turtles that breed on the beaches and the rich diversity of fish which call the reef their home. This well established Barrier Reef holiday resort has the great benefit of being surrounded by coral. The island is both a part of the Great Barrier Reef National Park and the location of The University of Queensland Heron Island Research Station, a world class research and teaching facility.

Heron Island is located 72 km north-east of Gladstone and 539 km north of Brisbane. The island is accessible from Gladstone by boat, seaplane or helicopter.

On January 12, 1843 the HMS Fly anchored off the island and the ship's naturalist, Joseph Bette Jukes, noting the reef herons, named it after the herons which are part of the island's diverse bird life.

Description of the island
Heron Island is a 16.8 hectare coral cay. It is 1.8 km around the island which is surrounded by reefs which can be explored during low tide.

How do visitors access it?
The island is accessible from Gladstone by boat, seaplane or helicopter. See http://heronisland.com/plan/getting-here for details. The Heron Islander, a 34 metre vessel, takes around 2 hours. Flights take around 20 minutes.

Reef Walking
Once a day, at low tide, the resort's Naturalist Guides takes groups reef walking. This activity involves looking at clams, coral formations, beche de mer and marvelling at the richness and variety of reef life. The Reef Walk lasts about 90 minutes.

Island Walking
Lasting about 90 minutes and led by one of the resort's Naturalist Guides, this is an opportunity to accompany an expert and learn about the island's fauna and flora.

Snorkelling and Diving
Because there is a deep sea channel between Heron Island and Wistari reef the ability to explore the edge of the cay, while remaining in calm waters, is particularly good. The island boasts 21 recognised dive sites and has been nominated as one of the world's premier dive destinations. It is common to see turtles, reef sharks, schools of smaller fish, forests of staghorn coral and other undersea wonders.

Birdwatching
At nesting time there can be up to 200,000 birds on the island. Not surprisingly, at that time, the island smells of guano and the air is thick with terns and shearwaters .

Turtle Watching and Whale Watching
From December to April thousands of turtles use the island as a breeding ground. The winter months see large numbers of whales passing through the channel between the cay and Wistari Reef.

How big is it?
109 rooms catering for approximately 200 people. Accommodation ranges from compact turtle rooms through reef rooms, beachside suites and Wistari suites. For images of rooms and the rates for the rooms and suites, check out http://heronisland.com/stay/room-types-rates.

Who does it appeal to?
The resort caters for both families and couples.

* It has been estimated that Heron Island began forming as a coral cay around 6,000 years ago.

* Captain James Cook sailed by in 1770 but failed to notice the island.

* In 1802 Matthew Flinders sailed up the coast but failed to spot Heron Island.

* On January 12, 1843 the HMS Fly, captained by Francis Blackwood, anchored off the island and the ship's naturalist, Joseph Bette Jukes, noting the reef herons, named it after the herons which are part of the island's rich bird life.

* Until 1932, it remained virtually untouched. In that year Captain Christian Poulson was granted a lease over the island. His plan was to develop a tourist resort.

* In 1943 the entire island was declared a National Park.

* By 1947 a regular Catalina flying boat service was operating from Brisbane.

* In 1951 the University of Queensland established a marine research station on the island.

* In 1980 the resort was taken over by P&O Australian Resorts.

* The resort is currently operated by the Aldesta Group.

The island has its own visitor information for people staying at the resort. From outside Heron Island Resort can be contacted at tel: 1800 875 343 or check out http://heronisland.com.

The resort has a very comprehensive website. Check out http://heronisland.com. for prices and details. 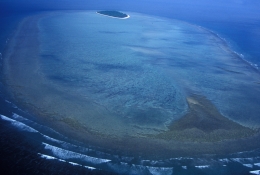 Heron Island from the air 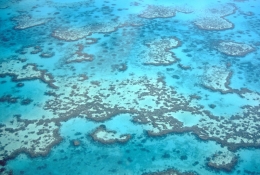 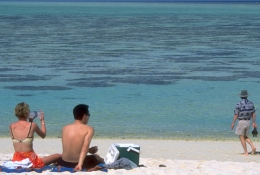 Relaxing on the beach with the coral reef just offshore 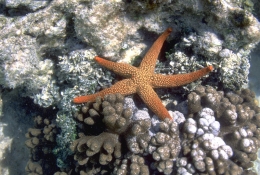 A starfish on the coral surrounding the island