Hervey Bay exists for two reasons: it is the most popular access point to Fraser Island and, in season, it is central to the whale watching industry because large numbers of whales come to the bay to breed. Essentially a string of interconnected villages - Urangan, Torquay, Scarness, Pialba and Point Vernon - Hervey Bay sprawls along the shoreline in a series of small shopping centres and a seemingly endless run of holiday units, motels, caravan parks and flats. A true holiday suburbia.
Beyond whale watching, Hervey Bay's tourist attractions include fishing, walking, water skiing and scuba diving. There is also an aquarium, an interesting historical museum and a memorial to the kanakas who worked the sugar fields in the area.
Hervey Bay has boomed since the 1980s. It was once a series of quiet and sleepy villages. It is now a city (officially proclaimed in 1984) where modern project homes have sprung up to provide accommodation for people (many from Victoria) eager to retire to the sun. The result has produced an unusual settlement where the foreshore is taken up with Caravan Parks (it once boasted that it was the "Caravan Capital of Australia"). There are shops on one side of the never-ending Esplanade, then the Caravan Parks, then a narrow hard sand beach. It is a town designed for short term holiday makers where retirees have settled permanently.

Hervey Bay is located 292 km north of Brisbane and 34 km east of Maryborough,

Although he did not enter the bay (he was actually 6 km offshore when he sailed past), Captain James Cook named it on 22 May, 1770 after Augustus John Hervey, third Earl of Bristol, a member of the Royal Navy and the Member of Parliament for Bury St Edmunds.

The Matthew Flinders Lookout and Memorial
The Matthew Flinders Memorial is located in Dayman Park, Urangan. It lies between the Urangan Pier and Hervey Bay Marina. It dates from 1999 and celebrates the Bicentenary of Flinders' first contact with Fraser Island. A bronze plaque on the monument reads: "Erected to the memory of Capt Matthew Flinders R.N. who landed hereabout from HMS Norfolk on 6th August, 1799 and Lt Joseph Dayman R.N. who passed here in the schooner Asp, after making the first passage of the Fraser Island Straits in 1847." Dayman found the straits by clinging to the shores of the bay as he sailed down the coast after a surveying expedition in the Port Curtis area. For more information check out http://poi-australia.com.au/points-of-interest/australia/queensland-1/urangan/matthew-flinders-lookout-dayman-park-urangan-hervey-bay-qld.

Urangan Pier
Stretching 868 metres out into the sea (it was originally 1107 metres long) and now over 100 years old, the Urangan Pier was originally built to create a deep water facility which could ship sugar, timber and coal from Hervey Bay. Construction began in 1913 and finished in 1917. It was accompanied by a railway line which connected to the port from Pialba. It continued to be used extensively until the 1960s and stopped all operations in 1985. It was reopened in 1999 and today it is used by holidaying anglers and people who want a leisurely walk out into the bay. It is possible to catch whiting, bream, flathead, reef fish, trevally, tuna and mackerel from the pier.
During World War II Fraser Island and Hervey Bay were used as training grounds for the famous Z-Force. Using an old Japanese fish carrier named Kofuku Naru, which had been changed to the Krait, Z-Force managed to get into Singapore Harbour where they attached limpet mines to a number of Japanese vessels. In one night they blew up over 38,000 tons of Japanese ships and, most importantly, they successfully managed to return to Australia.

Whale Watching
In recent years the fashionable activity of whale watching has attracted thousands of people to the area. According to the Discover Hervey Bay website (http://www.discoverherveybay.com/Whales/whale.htm) there are no fewer than eight companies operating along the foreshore. The best time to see whales is from mid-July through to early November. The Discover Hervey Bay site (http://www.discoverherveybay.com/Whales) provides extensive details and points out that the "Humpback Whales belong to the group of whales known as rorquals, a group that includes the Blue Whale, Fin Whale, Bryde's Whale, Sei Whale, and Minke Whale. Rorquals have two characteristics in common: dorsal fins on their backs, and ventral pleats running for the tip of the lower jaw to the navel area. They are characterized by the possession of baleen plates for sieving the krill upon which they feed." It is estimated that over 3,000 whales will pass Hervey Bay in a single season. The whales can grow to 15 metres in length and weigh up to 45,000 kg.

Reefworld Aquarium
Reefworld Aquarium is located at the corner of Kent and Pulgul Streets, Dayman Point and was established in 1979. It has living coral, tropical fish, a shark pool, large reef fish, crabs, green sea turtles and Queensland gropers among many other exhibits. It is open from 9.30 am - 4.00 pm seven days a week, tel: (07) 4128 9828. Check out http://www.discoverherveybay.com/ReefworldAquarium/.

Botanic Gardens
Located in Elizabeth Street, Urangan the Hervey Bay Botanic Gardens cover 26 ha and offer a display of plants specific to the Wide Bay and Great Sandy Strait areas. The gardens include an Orchid House which has a display of over 20,000 orchids (it is open Mondays and Fridays from 8.30 am to 3.45 pm and Tuesdays to Thursdays from 10.00 am to 3.30 pm) and a Bush Chapel which is popular for weddings. The park also includes a Japanese Bridge and an Aboriginal Bush Tucker garden. Check out http://www.visitfrasercoast.com/destinations/hervey-bay/attractions/hervey-bay-botanic-gardens for more details.

Memorial to the Kanakas
There is a Memorial to the Kanakas at Point Vernon (it is located at the back of the Polson Cemetery in Corser Street) which is a reminder that South Pacific "slaves" were brought to Australia as conscripted labour from 1863-1906. There were an estimated 12,000 (of a total of over 50,000) kanakas living in the Maryborough-Hervey Bay area. The excellent Monument Australia website (http://monumentaustralia.org.au/themes/culture/social/display/92272-kanaka-memorial) notes: "The Kanaka Memorial was erected in memory all South Sea Islanders bought to Queensland as labour to work in cotton and cane fields. The memorial is erected at the site of fifty-five otherwise unmarked graves of Islanders. The memorial depicts a life size Islander standing with a cane knife in one hand and with the other hand holding the arm of a dead companion lying at his feet. The backdrop resembles sugar cane.
Islanders were used as conscript labour in Queensland`s sugar cane industry from 1863 to 1906. Over forty ships brought the Islanders to Queensland, many of whom were kidnapped or `blackbirded`, having little understanding of the three year labour contracts they had signed. Twelve thousand "kanakas" as they were called, were brought into the area around Hervey Bay, initially by one Captain Coath.
The Captain`s methods caused the death of many Islanders during the voyage to Australia. A government agent, Meiklejohn, was sent to check that the recruiting was fair. During this trip, the Captain put the agent in chains where he stayed for the remainder of the voyage. As a result, Meiklejohn temporarily lost his sanity but when he recovered his testimony led to Coath`s imprisonment."

Ferry Services to Fraser Island
Vehicular and passenger ferries depart for Fraser Island from Hervey Bay six times a day. Check out http://www.fraserislandferry.com.au/fraser-island-barges.html for details. As the website explains: "Fraser Island vehicle barges and passenger ferry services run daily from River Heads, south of Hervey Bay to World Heritage-listed Fraser Island. The Fraser Venture runs three services daily from River Heads (20 minutes south of Hervey Bay) to Wanggoolba Creek and the Kingfisher Bay Ferry runs three services from River Heads to Kingfisher Bay Resort.  Limited parking is available on the roadside or at the ferry departure point. For guests staying at Kingfisher Bay Resort, you can book secure parking and the resort will shuttle you to the ferry departure point. Queensland Parks and Wildlife Service permits are required for driving and camping on the island and we advise all visitors to check the QPWS Conditions report pre-arrival. Drivers should be aware of tide times and keep off the beach for two hours either side of high tide."

Fraser Island
Fraser Island is famous as the world's largest sand island. If you have a 4WD then the answer is simple: travel across to the island by ferry and explore it at your leisure. If not check out the tours (a typical one is Fraser Experience Tours - http://fraserexperiencetours.com.au/1-day-experience-tour - where the standard highlights are the Central Station and the rainforest, the near-perfect Lake McKenzie, the famous 75 mile beach, Eli Creek which is ideal for a freshwater swim, the coloured sands at the northern end of the island, and the famous Maheno shipwreck. Check out https://www.aussietowns.com.au/town/fraser-island-qld for detailed information about the island. It really is one of the wonders of the world.

* Prior to European settlement the area was occupied by the Badtjali Aborigines who stretched from Maryborough to Fraser Island.

* The first European to reach the Hervey Bay area was Captain James Cook who sailed past Fraser Island naming many of the prominent features. Cook did not sail into Hervey Bay. In fact he was some 6 km offshore as he sailed north. He named the bay after Augustus John Hervey a prominent Royal Navy officer.

* In 1799 Flinders sailed around Fraser Island entering the bay and going ashore at the present site of Dayman Park. He was the first European to step ashore at Hervey Bay.

* Flinders returned to the area in 1802 on his circumnavigation of the Australia. He identified Fraser Island but could not find a channel between it and the mainland.

* In 1846 Lieutenant Joseph Dayman became the first European to navigate the channel between the mainland and Fraser Island.

* The first settlement of Hervey Bay occurred in the 1850s when settlers from England began breeding cattle between Booral and Burrum Heads.

* Hervey Bay was originally part of a cattle station, the Toogoom Run, which was settled in 1854.

* The first permanent white settler at Hervey Bay was Boyle Martin who, with his wife and child, arrived in 1863. He worked cutting timber and it is likely that he was the first person to grow sugar cane in the area.

* By 1859 the first subdivision of land around Hervey Bay took place.

* By 1863 timber cutters were in the area exploiting the pines that grew along the shoreline. Coal mining started at Howard in this year.

* By the mid-1860s Maryborough businessmen had taken up large waterfront blocks of land for weekend retreats.

* In the 1870s many Scandinavian settlers moved into the area and for a short time Hervey Bay became known as Aarlborg. They were dairy farmers..

* In 1883 sugar was introduced to the area and the Kanakas were brought from the South Pacific islands to work on the sugar plantations.

* In 1896 Hervey Bay was connected to Maryborough by railway.

* By 1917 the Urangan Pier was completed and Urangan became an important port for the export of sugar.

* By the 1920s the main industries in the area were sugar cane, pineapples, cattle and fishing.

* Modern tourism started in the 1950s when Hervey Bay became a popular retreat particularly for retired Victorians who were attracted to the area by the warmth of the climate and later the added appeal of 'no death duties'.

* Today it is primarily a mainland departure point for visits to Fraser Island and a popular destination for backpackers making their way up the coast from Sydney to Cairns.

There is an extensive and detailed local website. Check out http://www.discoverherveybay.com for deals on accommodation and whale watching. There is also http://www.visitfrasercoast.com/. 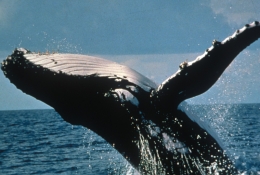 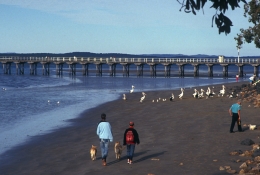 The beach near the Urungan Pier. 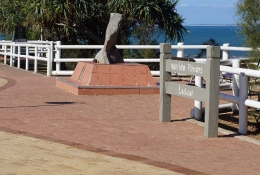 The memorial at Matthew Flinders Lookout 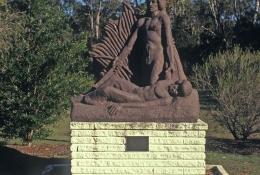 The memorial to the Kanakas who worked the local sugar plantations as "slaves". 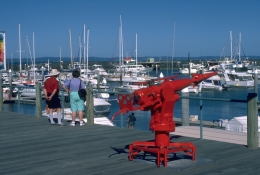 An old whaling harpoon at the Hervey Bay Marina. 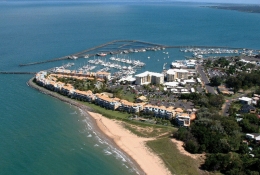 An aerial view of the Hervey Bay marina.