Rural service town and Gateway to the Alpine National Park.

Heyfield is a quiet rural service centre which has been partly sustained by the reliable water supply from the Glenmaggie Reservoir where you can boat, swim, sail, water ski or fish for trout. Today the appeal of the town lies in the excellent Heyfield wetlands, the opportunities offered to cyclists with the Gippsland Plains Rail Trail, and the touching and poignant Victorian Timber Workers Memorial.

Heyfield is located 198 km east of Melbourne via the Princes Highway and is 58 metres above sea level.

Yes, it really is "hay field". In 1841 James McFarlane selected a pastoral run in the area and named the district 'Hayfield' after recording in his journal that it looked "like a field of waving corn".

Victorian Timber Workers Memorial
Located in Lions Park between Mary Street (the town's main street) and George Street, the Victorian Timber Workers Memorial is "a permanent state memorial to Victoria's timber workers". The brochure explains: "The memorial is in Lions Park with the names of those fatally injured on a plaque set within stone pillars which are visible as you walk around the memorial. Those eligible for those plaques must have worked within Victoria and lost their lives whilst working in the timber industry, either in the bush, coupe, mill or cartage. A public art sculpture is the centre piece of the memorial, which is surrounded by 75 yellow box trees, connecting paths, low stone walls and seating." The sculpture, a timber workers hut, is titled "Shelter" and was created by Holly Grace and Aaron Robinson. For more information tel: 0427 482 854.

Heyfield Wetlands and Information Centre
Located at 1a Macfarlane Street and created in 2003 the Heyfield Wetlands (which cover 28 ha) and the Heyfield Wetlands Information Centre are home to a variety of different bird species. There is a detailed map of the wetlands near the Information Centre. It includes the sections bounded by Commercial Road and Racecourse Road as well as the smaller wetlands which lie just beyond the Information Centre. The path around the "artificial clearwater lake" includes a bird hide and a lookout platform as well as extensive signage. In total the Wetlands have four walks all of which are clearly marked on the map. There is the Sero Walk (660 metres); Latham's Snipe Walk (680 metres); Woodlands Walk (990 metres) and Marsh Frog Walk (630 metres).
The Information Centre houses the Neville-Smith Timber Industries display. It is open from 10.00 am - 3.00 pm weekdays and 10.00 am - 4.00 pm on weekends. tel: (03) 5148 3404 or check http://www.tourismwellington.com.au/heyfield/attractions/item/heyfield-wetlands-information-centre.

Glenmaggie Reservoir and Lake Glenmaggie
Located 6 km north of Heyfield is Glenmaggie Reservoir was completed in the 1920s. The aim was to meet the demand for water created, particularly by sugar beet farmers, in the valleys below the reservoir. The water level was raised in 1947 when floodgates were built on the top of the wall. The lake can be used for boating, fishing, swimming and picnics. There are two recreation areas - at the Dam Wall and at Sandy Point. There is an excellent map of Lake Glenmaggie which can be downloaded at http://www.srw.com.au/files/General_publications/Lake_Glenmaggie_boating_brochure_-_March_2013.pdf.

Glenmaggie
Glenmaggie is a tiny village located 11 km north of Heyfield. It was gazetted in 1873 and the first school was opened in 1875. The Scottish origins of Glenmaggie's name are connected with the cattle runs of the MacFarlanes. The original township was flooded when the Lake Glenmaggie reservoir was constructed in the 1920s. It had been started in 1919 and was designed to provide water for the sugar beet around Boisdale. The water became important for the dairy farmers in the region and in the 1950s the weir was extended to provide water for soldier settlers in the Nambrok-Denison area. Some its buildings, including the Mechanics Institute, St John's Roman Catholic Church, the town hall and the Church of England, were saved and transferred to their present locations but slowly the old buildings have disappeared. The Post office burnt down in 1989. The Church of England was demolished in the 1990s. The school was demolished to make way for the Glenmaggie Fire Station in 2012.

Gippsland Plains Rail Trail
This new trail extends from Stratford to Traralgon, a distance of 67 km. It follows the rail line that was opened in 1883 and which, historically, carried timber and sugar beet from the area. It started to be closed in 1986 and the Rail Trail was officially opened in 2005.
The most popular sections from Heyfield is Dawson to Heyfield, a distance of 6 km and Heyfield to Maffra, a distance of 18 km.
The Gippsland Plains Rail Trail explains that the Dawson to Heyfield section includes: Crossing over some of the few remaining railway tracks on the trail, you will enter Dawson Flora Reserve where many Plants of Significance are found along the trail's shoulder. Some are quite small, and easily missed, while others are quite large ...  Dawson was once the site of busy Glenmaggie Railway Station and siding, but today, nothing remains of the building that at one time even housed a post office. As you approach Heyfield you will pass by the impressive log stacks of ASH (Australian Sustainable Hardwood), owner/operator of Australia's largest hardwood sawmill, which is also in Heyfield, but at a different location to the log stacks. Note this private property, and access by unauthorised persons is not permitted. Now there is a short descent to Racecourse Road, and care must be taken here. Follow Racecourse Road to Davis Street, or take the scenic route around Heyfield Wetlands before re-joining the trail where you left it. Proceed to Davis Street and follow the trail through Apex Park to the rotunda in adjoining Lion’s Park. This is the end of the Cowwarr-Heyfield leg and beginning of the Heyfield-Maffra leg."
And of the Heyfield to Maffra leg they note: "Heading east from Heyfield towards Tinamba, the trail follows the South shoulder of Traralgon-Maffra Road (C105) for a kilometre or two, before crossing the road and heading northeast. The going here is flat and easy on well packed gravel ... The trail head at Tinamba is actually 50-100 metres south of the township, but it is well worth leaving the trail to visit the Tinamba Hotel."
TINAMBA TO MAFFRA (approx. 8kms):
"Back on the trail now and you're heading to Maffra. The trail is predominantly flat and easy going on packed gravel. Not far out of Tinamba, the trail rejoins Traralgon-Maffra Road, and follows its South shoulder. Keep an eye out for the remains of an old railway bridge not long after you pass Riversdale Road. If the light is right, it presents a haunting subject to photograph. The trail crosses to the North side of Traralgon-Maffra Road a little past Mewburn Road. You are now very close to Maffra, and about to enter a pretty section of the trail known as The Billabongb Trail. The next 300-400 metres, with its dense, green vegetation and billabong has a tropical rainforest feel about it ... This is where the trail meets the Macalister River. The bridge crossing provides a wonderful view of the river on either side, and sweeping views across to Maclister Park." For a map and very detailed information check out http://www.gippslandplainsrailtrail.com.au/about-the-trail.

* Prior to the arrival of Europeans the area around Maffra was occupied by the Braiakaulung group of the GurnaiKurnai Aboriginal people.

* The first European visitor into the area was Angus McMillan in January, 1840. He was exploring the area for NSW squatter, Lachlan Macalister who established a pastoral run 11 km north of present-day Maffra, at what is now Boisdale.

* Later in 1840 Paul Strzelecki passed through the area.

* In 1841 James McFarlane selected a pastoral run in the area.  He named the district 'Hayfield' after recording that it looked "like a field of waving corn".

* In 1866, McFarlane's property was taken over by wealthy pastoralist and one-time member of the Queensland Legislative Council, James Tyson.

* Tyson was dissatisfied when he was refused compensation for a bridge, built across the Thomson River in 1878, which encroached upon his land. As a result, he erected a barrier at one end of the structure. A group of infuriated locals, led by a burly African American named 'Freeman', fought 'Hungry' Tyson's men and destroyed the gate. The "Battle of Heyfield Bridge", as it became known, was followed by free beer at an old bark pub and became the source of the folk song "Hold The Bridge".

* A loop line from Traralgon reached the town in 1883.

* In 1891 the Heyfield Butter Factory Company was formed.

* When McFarlane died in 1898 his property was divided into 114 farms.

* In 1948 over 300 men, displaced by World War II, arrived in Heyfield to work on the Glenmaggie Dam project.

* In 1950 eight companies were granted licenses to extract mountain ash from the Macalister Forest District.

* In the 1950s soldier settlers moved onto the farms around Heyfield.

* Glenmaggie Reservoir was completed in 1960. Many of the workers on the Glenmaggie Dam were displaced persons from Europe.

* By the 1960s 250 rail trucks a month were carrying timber, milk powder, butter and livestock from Heyfield station.

* The last passenger service from Heyfield Railway Station was in 1977.

There is a useful local website which includes the town and the local area. Check out http://www.visitheyfield.com.au.

Railway Hotel and the main street of town. 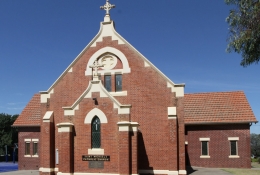 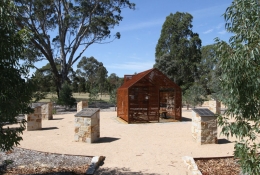 The sculpture of a timber worker's hut is part of the larger Victorian Timber Workers Memorial. 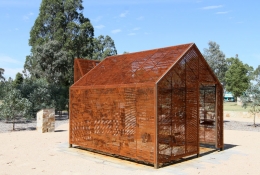 The sculpture of a timber worker's hut, titled Shelter, and created by Holly Grace and Aaron Robinson. 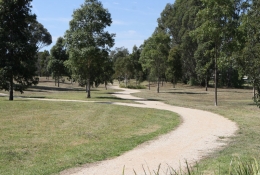 The Gippsland Plains Rail Trail passes through the centre of town. 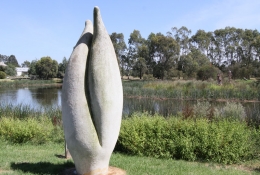 A sculpture beside the path around the Heyfield Wetlands. 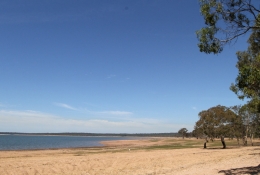