In recent times Heywood has become known as the starting point for the Budj Bim Tours of Lake Condah and the Tyrendarra Indigenous Protected Area. The discovery that the local Gunditjmara people had been engaged in aquaculture for the past 6,000 years has led to the area being World Heritage listed by UNESCO and people travelling to see the remnants of the stone huts and the fishing traps which were used to catch eels and fish. It has made this modest rural service centre hugely important in the Aboriginal history of Australia.

Heywood is located 27 metres above sea level and 335 km west of Melbourne at the intersection of the Princes and Henty Highways.

David Edgar built a Bush Tavern on the future townsite in 1842 and a settlement slowly grew around it. Initially it was known as Edgar's, and then as Second River but when it was surveyed in 1852 by Lindsay Clarke he named the township, Heywood, after Heywood in Lancashire, England.

Cobboboonee National Park and Jackass Fern Gully Walk
Located 21 km west of Heywood via Kentbruck and Cobboboonee Road, is Cobboboonee National Park. The park is a combination of lowland forests, heathlands and wetlands and has a number of interesting walking trails, two horse trails and six camp sites. Of particular interest is the Jackass Fern Gully Campground which is located at the headwaters of the Fitzroy River. In the early days of European settlement it was used as a crossing site and a watering place for bullock teams hauling logs from the forest. The site got its name from the distinctive Soft Tree Ferns which grow in the moist valley beside the Fitzroy River. Other ferns in the park include fishbone ferns and maidenhair ferns. The ferns are protected and shaded by Blackwood Wattles and Hazel Pomadreeis which grow in the area. There is an interesting Jackass Fern Gully Walk which starts at the Jackass Picnic Ground and is an easy to medium grade walk of 6 km which takes 90-120 minutes. The track heads up the hill to Mt. Van Dyke, joins the Great South West Walk before crossing the Fitzroy River Bridge, and follows the track back towards the river and onto the T&W Road. There is a detailed map and information about the National Park at https://parkweb.vic.gov.au/__data/assets/pdf_file/0004/314536/Park-note-Cobbobonee-National-Park.pdf.

The UNESCO Budj Bim Cultural Landscape Explained
In June, 2019 the Budj Bim Cultural Landscape near Portland was accepted onto the UNESCO World Heritage List. Reporting on the listing the ABC noted: "The site was created about 6,600 years ago by the Gunditjmara people, who used stones to build an elaborate series of channels and pools to harvest eels from Lake Condah. There is also evidence at the site of stone dwellings, and trees that may have been used to smoke or preserve the eels that were caught. Not only does Budj Bim bust the myth that all Indigenous people were nomadic and not agriculturally inclined, it is also considered one of the oldest aquaculture sites in the world."
Discussing the "Outstanding Universal Value" the UNESCO listing explained:

"Brief synthesis
"The Budj Bim Cultural Landscape is located in the traditional Country of the Gunditjmara Aboriginal people in south-eastern Australia. The three serial components of the property contain one of the world’s most extensive and oldest aquaculture systems. The Budj Bim lava flows, which connect the three components, provides the basis for this complex aquaculture system developed by the Gunditjmara, based on deliberate redirection, modification and management of waterways and wetlands.
"Over a period of at least 6,600 years the Gunditjmara created, manipulated and modified these local hydrological regimes and ecological systems. They utilised the abundant local volcanic rock to construct channels, weirs and dams and manage water flows in order to systematically trap, store and harvest kooyang (short-finned eel – Anguilla australis) and support enhancement of other food resources.
"The highly productive aquaculture system provided a six millennia-long economic and social base for Gunditjmara society. This deep time interrelationship of Gunditjmara cultural and environmental systems is documented through present-day Gunditjmara cultural knowledge, practices, material culture, scientific research and historical documents. It is evidenced in the aquaculture system itself and in the interrelated geological, hydrological and ecological systems.
"The Budj Bim Cultural Landscape is the result of a creational process narrated by the Gunditjmara as a deep time story. For the Gunditjmara, deep time refers to the idea that they have always been there. From an archaeological perspective, deep time refers to a period of at least 32,000 years that Aboriginal people have lived in the Budj Bim Cultural Landscape. The ongoing dynamic relationship of Gunditjmara and their land is nowadays carried by knowledge systems retained through oral transmission and continuity of cultural practice.

"Criterion (v): The continuing cultural landscape of the Budj Bim Cultural Landscape is an outstanding representative example of human interaction with the environment and testimony to the lives of the Gunditjmara. The Budj Bim Cultural Landscape was created by the Gunditjmara who purposefully harnessed the productive potential of the patchwork of wetlands on the Budj Bim lava flow. They achieved this by creating, modifying and maintaining an extensive hydrological engineering system that manipulated water flow in order to trap, store and harvest kooyang that migrate seasonally through the system. The key elements of this system are the interconnected clusters of constructed and modified water channels, weirs, dams, ponds and sinkholes in combination with the lava flow, water flow and ecology and life-cycle of kooyang. The Budj Bim Cultural Landscape exemplifies the dynamic ecological-cultural relationships evidenced in the Gunditjmara’s deliberate manipulation and management of the environment."
For the complete information check out https://whc.unesco.org/en/list/1577.

Budj Bim National Heritage Landscape Tours
Lying to the north of Heywood is the Budj Bim National Heritage Landscape where the local Gunditjmara Aboriginal people, unlike many Aboriginal groups, were not nomadic hunters and gatherers. Rather they constructed an extraordinary aquaculture system across the creeks and marsh beds of the Mt Eccles-Tyrendarra lava flows and wetlands. Thousands of years before the arrival of Europeans they built stone houses and trapped fish and eels as part of a complex and sedentary lifestyle. It is now recognised as one of Australia's earliest aquaculture ventures.
Budj Bim Tours offer three guided tours led by local Indigenous guides which inspect the remnants of this settled lifestyle - circular stone dwellings and elaborate fish nets used to capture the creatures living in and around Lake Condah.
* Tyrendarra Tour - is a 2.5 hour tour looking at different types of fish and eel traps at Tyrendarra.
* Lake Condah Tour - is a 4 hour tour looking at the waters of the Gunditjmara country, the animals that inhabit the lake and stone huts that are still around today at Lake Condah.
* Budj Bim Tour - is a 6 hour tour to a variety of Gunditjmara sites. Visitors experience the culture, landscapes and food of the Gunditjmara.
The Winda Mara Aboriginal Corporation and Budj Bim Tours of Heywood help organise tours to explore the remains of stone house sites and eel traps, as well as highlighting the Aboriginal culture and their way of life. Tel: 0458 999 315 or check out https://www.budjbimtours.net. The tours office is located at 12 Lindsay Street, Heywood.

* Prior to European settlement the area was occupied by the Gunditjmara Aboriginal people.

* The first European into the area was Major Thomas Mitchell who looked down on the town site when he reached Mount Eckersley in 1836.

* In 1839 surveyor Charles James Tyers noted that the land around the Fitzroy River was suitable for grazing and cultivation.

* The Bush Tavern was built by Samuel Evans in 1839 and a settlement grew up around it.

* Through the 1840s a number of squatters established pastoral runs in the area.

* In 1851 the small town was subject to a Black Thursday fire.

* The town was surveyed in 1852 by Lindsay Clarke who named it after Heywood in England.

* A Roman Catholic Church was consecrated in 1866.

* A railway line from Portland reached Heywood in 1877.

* In 1902 the local pastoral and agricultural society was formed.

* In 1917 the railway line from Mt Gambier reached the town.

* In 1995 the railway to Portland was closed down.

I Am Portland has a useful website for Heywood. Check out https://www.iamportland.com.au/towns-of-great-south-west/heywood. 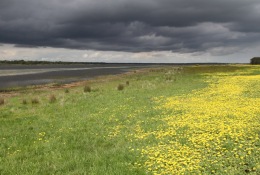 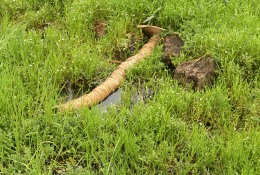 A hand woven eel trap in the stream at Badj Bim 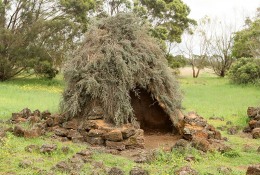 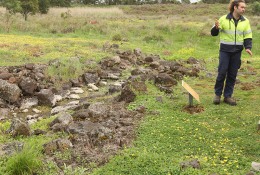 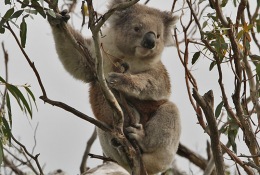 A koala on the Budj Bim Tour route