What happens to a mining town when the mines close down? In the case of Hillgrove, which at its height had a population of 3,500, the buildings were sold and transported to other towns in the district where they were needed. In theory Hillgrove is an old gold and antimony mining town on the edge of Hillgrove Gorge in the Northern Tablelands. In practice it is a town of a few people and a few buildings so it is not a ghost town but rather a town which has contracted from a population of thousands to less than one hundred. When gold mining closed down in 1921 nearly all the buildings were dismantled and moved to Armidale and other centres. Today the only two original buildings of genuine significance are the post office and school which has become the local museum. The result is a fascinating "town" with lots of signs indicating where buildings once stood and lots of empty blocks of land with scattered, rusting relics which hint at a more prosperous time.

Hillgrove is located 32 km east of Armidale and 542 km north of Sydney via the Newcastle Freeway and New England Highway. It is 6 km south of the Grafton Road which runs from Armidale to Dorrigo and is 1000 m above sea level.

Hillgrove started life as Eleanora Township and changed to Hillgrove in 1888. It was hardly a dramatic change. It was simply a case of naming the town after Hillgrove, a pastoral station to the north.

Museum and Heritage Walk
The Hillgrove Museum is situated in the old Hillgrove School (1897) on Scouler Street. It contains a collection of photographs and memorabilia designed to give the visitor "a unique insight into everyday life in old Hillgrove".  It is open Friday, Saturday, Sunday, Monday and public holidays from 10.00 a.m. - 5.00 p.m., tel: (02) 6778 1048.
The museum also has an A4 sheet which identifies the 'Central Business District as at c1905". The sheet can also be obtained from the Armidale Visitors' Centre at the corner of Dumaresq and Marsh Sts, tel: (02) 6772 8527 or 1800 627 736.
There is another pamphlet available which is a guide to 'Metz or West Hillgrove - Based on Henry Hogarth's surveys, 1893'.
The town has a large number of signs and plaques indicating where most of the old shops were located. Four larger information signs are located around the town at the recreation ground, cemetery, Bracken Street south and the road into town.

Metz
On the other side of the gorge, sign posted from Grafton Road and 24 km from Armidale, is the historic mining village of Metz. It was originally known as Sunshine and sometimes known as West Hillgrove. It came into existence in 1889 when gold mining spread across Baker's Creek Gorge. In 1892 it became known as 'Metz' and by 1898 it had a population of 750 which was serviced by a post office (1890), two schools, three churches, several shops, a School of Arts, two hotels, a Masonic lodge, a brass band and cricket and football clubs. The town was short lived. By 1904 the population was in decline and the closure of the hotel, post office and school had closed by the late 1920s. Today little of the town is left and what does remain is on private property. A good A4 sheet to Metz is available from the Armidale Visitor Information Centre, 82 Marsh Street, Armidale, tel: (02) 6770 3888 and the Hillgrove Museum. The main interest lies in the views from the Metz Lookout where the remains of the old Bakers Creek Mine can be seen at the bottom of the gorge. It lies 490 m below the gorge wall and the mine shaft was sunk a further 610 m below the surface. A rope-hauled tramway operated by a steam-powered winding engine pulled the trams up and down the precipitous incline.

* Prior to European settlement the area around Hillgrove was inhabited predominantly by the Anaiwan and Kamilaroi Aboriginal groups who passed through the area on trading routes which joined the coast and the hinterland.

* Small amounts of alluvial gold were discovered at Bakers Creek as early as 1857 and antimony was discovered at Hillgrove in 1866 however it was difficult to access and large-scale mining did not commence in the area until the early 1880s.

* The sign at the entrance to the town declares that it was officially established in 1884.

* In 1888 the town changed its name from Eleanora Township to Hillgrove.

* In 1889 St Michael's Roman Catholic Church was consecrated and in 1891 a small convent and school were built. The school closed in 1921.

* In 1894 Hillgrove became the first town in Australia to use hydro-electricity which was generated from the Gara Gorge to the west of the town.

* For a decade, from the late 1880s to the late 1890s, Hillgrove was the richest gold-producing site in NSW.

* With the closure of the mines most of the buildings were dismantled and removed to Armidale and surrounding towns.

* There was a brief revival of gold mining in 1937 and during the war years the Damned If I Know Mine, a small operation which extracted tungsten ore, was profitable because of the need for tungsten's steel-strengthening capacity.

* Antimony mining became important in 1969 and both antimony and gold are still mined today.

There are no facilities in the town.

There are no facilities in the town. 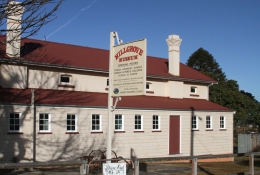 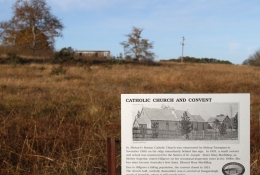 The location of the Hillgrove Catholic Church (1889) with the town's excellent and detailed signage. 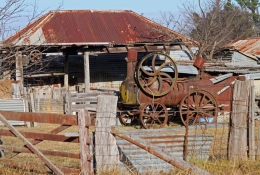 An old steam engine in a yard in Hillgrove 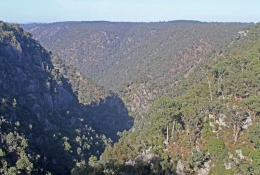 The valley below Bakers Creek Falls near Hillgrove 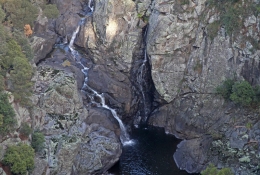 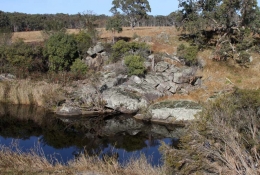